A cattle farm out in the Walnut Township, just west of the growing Des Moines, was the perfect place to break federal law in the 1800s. Especially with multiple out-buildings, a wooded area, and the power of being the land of a state legislator.

The Jordan House, located in now-West Des Moines by Racoon River Park, was a known stop on the Underground Railroad, the loosely organized pathway enslaved people used to reach freedom. It was built by James Jordan, a Virginia native and one-time slave catcher, who was so appalled by the experience he became a fierce abolitionist. In Iowa, he became known as the “Chief Conductor” for Polk County. 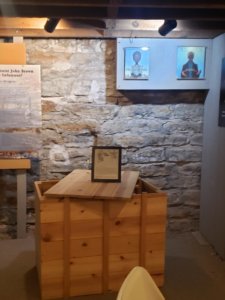 Record-keeping for the Underground Railroad was dangerous, especially since helping former slaves escape was a federal crime, so little is specifically known. However, there are coded letters from Jordan to other abolitionists, like Josiah Grinnell, who founded Grinnell, Iowa, which was known for being a community of abolitionists and another station on the Underground Railroad.

Though an exhibit about the Railroad exists in the house’s basement, it’s unlikely the basement was used to hide freedom-seekers. Instead, outbuildings and the woods themselves were safer, especially considering the basement held the house’s kitchen and had a door leading directly outside and to the fields. The house doesn’t have any hidden doors or pantries like others on the Underground Railroad.

In this area of Iowa, with strong abolitionists, the Underground Railroad was more organized, and several of the men involved were active about helping people hide so they could reach freedom, going so far as to drive wagons or carts themselves.

The house was sold by the Jordan family in 1947, and whatever paperwork—of any kind—that existed was likely destroyed. For years, the house was used as dormitories for summer camps, and then as grain storage for a dairy farm.

When it sat empty, the house was almost burned down as a practice exercise for the local fire department, but enough people stood up to protest and managed to save the house. The West Des Moines Historical Society formed because of this, and a descendant of Jordan’s helped to restore the house to its former glory.

Several original pieces of furniture and art, including the family’s grand piano and a portrait of Abraham Lincoln, are in the house. 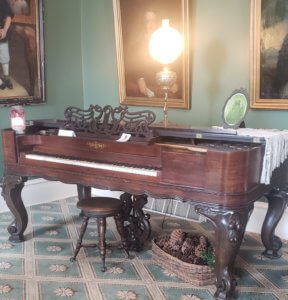 Tours of the house are offered every Friday and Sunday at 11 a.m. and 1 p.m. Buying tickets online is encouraged, but walk-ups are welcome.

The West Des Moines Historical Society also offers virtual tours and monthly events. The tour is also offered with ASL interpreters, if requested, and the historical society is working to make it accessible to people with visual impairments.