Maybe you’ve heard about the recent push to investigate and remove books from school libraries in Iowa. If you don’t have much time to dig into the details, here’s a quick guide to the big points of focus, what’s happening, and why. Click the links for more from the initial stories.

Across the Des Moines metro, parents have been challenging books for addressing topics such as sex, sexual assault, race and LGBTQ identity.

It started with a Waukee School Board meeting in October where a community member spoke and read excerpts from books about LGBTQ experiences that were available in the Northwest High School library. She focused on snippets that mention sex and claimed they depict pedophilia or incest. The challenge resulted in the books being removed from the library while they’re reviewed.

Since, more people have challenged, or planned to challenge, these and other books in schools like Urbandale and Johnston. A Republican state senator showed up to one recent Urbandale meeting and threatened to introduce legislation to charge teachers with felonies

What Critics Get Wrong

None of the books include sex between an adult and a minor. The incest claim is taken out of context from a scene the author clearly calls abuse in a chapter more focused on the abusive aspect than the act. The books are also only available to high school students.

A common strategy people use to ban or censor content they disagree with is to pick the most outrageous or shocking parts of a book, and that’s in practice here.

The books are actually about identity and many are memoirs in which the authors explain their journeys to understand their identities and feel like they belong. Typical of a memoir, all include the major moments and events that influenced that journey.

In Iowa, the law about disseminating obscenity doesn’t apply to schools and public libraries.

Additionally, these three books challenged in Waukee are not the only titles facing challenges in Iowa. People at a Johnston school have also challenged “The Hate U Give” by Angie Thomas and “The Absolutely True Diary of a Part-Time Indian” by Sherman Alexei, two books penned by authors of color that also touch on racial discrimination.

The titles and types of books challenged are likely to continue growing and changing but the underlying strategy is the same.

Why This Matters to Youth

Young people spend their teenage years thinking about their identities and asking questions. Experts say books can help them find answers, know they aren’t alone, and give them safe, real-world examples and advice. Books about a diverse community, written by people from that community, also help others learn about and understand the community.

When teenagers can see themselves positively represented in media, they feel better about themselves and their futures. Research shows that safe, supportive, harassment-free environments improve the mental health and grade-point averages of all students.

Seniors at Northwest High School in Waukee said they weren’t surprised, but exhausted by all of this attention. They said they don’t understand how these books can be flagged when other books with similar content aren’t. They also said if they had been able to read books like these when they were younger, they would have felt better about themselves growing up.

The seniors pointed out most high school students know about sex. They’ve seen movies and TV shows or read other books, so these aren’t inappropriate for their age group.

Despite online misconceptions and deliberate misinterpretations, these three books do not portray pedophilia.

“Lawn Boy” is a coming-of-age novel about a 22-year-old Mexican-American man who’s trying to figure out how to achieve the American Dream while stuck doing menial jobs. The book focuses on how his fortunes change one opportunity and one pitfall at a time.

In the book, the adult character thinks briefly about experimenting with a childhood friend in the past, when they were both fourth graders. The scene is 32 words long. In the next chapter, the author remembers having sex with a woman. The scene is also only one paragraph—119 words—long. There has not been much outrage with the straight sex scene.

“All Boys Aren’t Blue” is a memoir told through a series of essays about the author’s experience growing up Black and gay. It tackles issues of identity, family, consent and marginalization. The scene brought up at school board meetings is a description of the author’s sexual assault by an older cousin when they were both underage. Johnson says, in the text, they knew it was wrong at the time, but that Johnson couldn’t stop it from happening.

The whole chapter is more about Johnson’s conflicted emotions during and after the assault, and the author clearly calls it abuse and shares their struggle to process it, and their hesitation to write about it at all.

This paragraph ends the chapter: 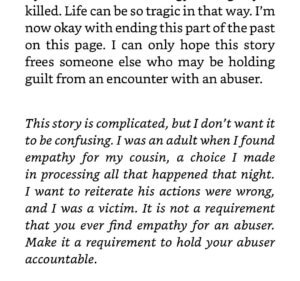 There is also an author’s note in that book that specifically lays out why the author believes having these discussions are so necessary. All of which are a far cry from what conservative critics have alleged, that these books are promoting the more explicit actions described. 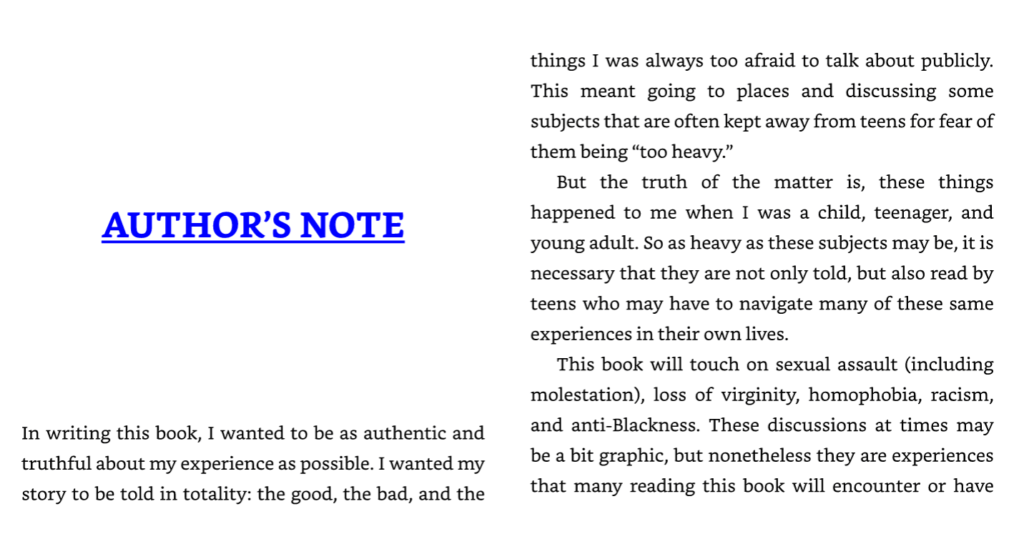 “Gender Queer” is a graphic-novel memoir about growing up not understanding why boys and girls are treated differently, and how gender roles and expectations don’t feel right to the author. Kobabe writes about growing up, navigating puberty, learning more about their identity, and eventually understanding being nonbinary and asexual.

Most of the exploration and discovery happens when the author is in college or graduate school, including the sex scenes.