At a school board committee meeting in Johnston Thursday night, Iowa Sen. Jake Chapman said there should be criminal charges against teachers who allow children to read books he believes are obscene. He later followed up in a Facebook post saying he would prepare legislation for the upcoming session that would allow felony charges to be brought against those teachers. 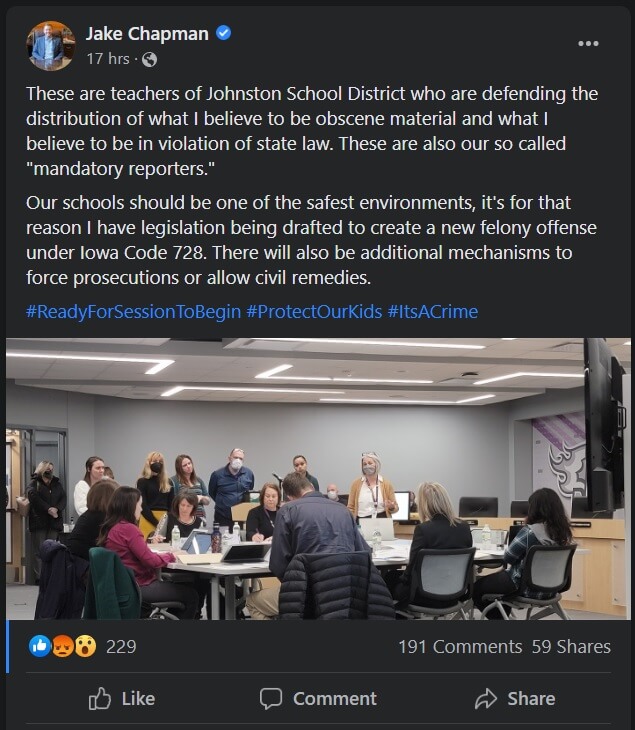 Chapman then said he would use his power as president of the Iowa Senate to make stricter laws banning obscene material in school and increase the penalties.

“If we need to, as the state of Iowa, provide deeper clarity when it comes to that and enhance those penalties, I will do that,” he said.

An enhancement would mean changing the charge from a misdemeanor to a felony.

Chapman cites Iowa code 728 which prohibits the dissemination of obscenity to a minor. However, a section of that code exempts public libraries and accredited schools.

In Johnston, two books were challenged by a parent, “The Absolutely True Diary of a Part-Time Indian” by Sherman Alexei and “The Hate U Give” by Angie Thomas. Both have been repeatedly challenged since their publications.

The parents’ complaints are about content that includes mentions of sex and discussions about race and racial identity.

Chapman was allegedly at the meeting at a parent’s invitation, but the district he represents doesn’t include Johnston. He was likely invited because Chapman has advocated for punishing teachers for weeks now.

In October, he said books in the Northwest High School library in Waukee should be criminally investigated. He said the same thing about clarifying Iowa code and upgrading penalties.

Teachers and a community member pushed back, arguing that keeping this content away from students won’t help them.

Neal Patel, a science teacher for the district said first that representation is important for students in a district where they only have two teachers of color. Then he said he’s seen the benefit texts with diverse viewpoints have on students.

“I’ve heard young people speak so critically and eloquently about this topic that you would be surprised that they were in high school,” he said. “I want you to understand that the entire goal of education is to get kids to think critically, and if we only provide text that is confirming the majority, they’re not really able to engage in that critical process.”

Another community member called the prospect of criminalizing this information ridiculous.

“I wasn’t going to speak today but after hearing what the president of the Iowa Senate said, I’m flabbergasted,” one community member said. “I don’t understand how you can say this is too explicit for kids. When I was in high school I took a human sexuality class. Is he saying that they’re gonna ban human sexuality class because that’s giving that material to kids?”