Elections for local office often come down to who voters feel have the best judgment to lead, especially when the candidates are relative newcomers and don’t have a voting record from past service.

Good judgment on important school decisions is what the four members of the Warriors and Wolves United ticket have stressed in their campaigns for the Waukee School Board. However, voters may wonder about a different kind of personal judgment when it comes to candidate Vin Thaker’s past social media postings, as well as the three others’ decision to campaign as a team with him.

A look back through Thaker’s public posts on Facebook, Twitter, and Instagram reveal a trend of racist, sexist, and otherwise degrading statements. Thaker recently made his Twitter account private and removed many posts from his Facebook page, but Starting Line collected screenshots earlier last month and independently verified others passed on to us before he did so.

His frequent targets on Twitter were members of the progressive “Squad” in Congress, and Thaker often added in racist and sexist language in his rebuttals to their tweets, including occasionally using the word “oriental” to presumably refer to people of Asian descent. 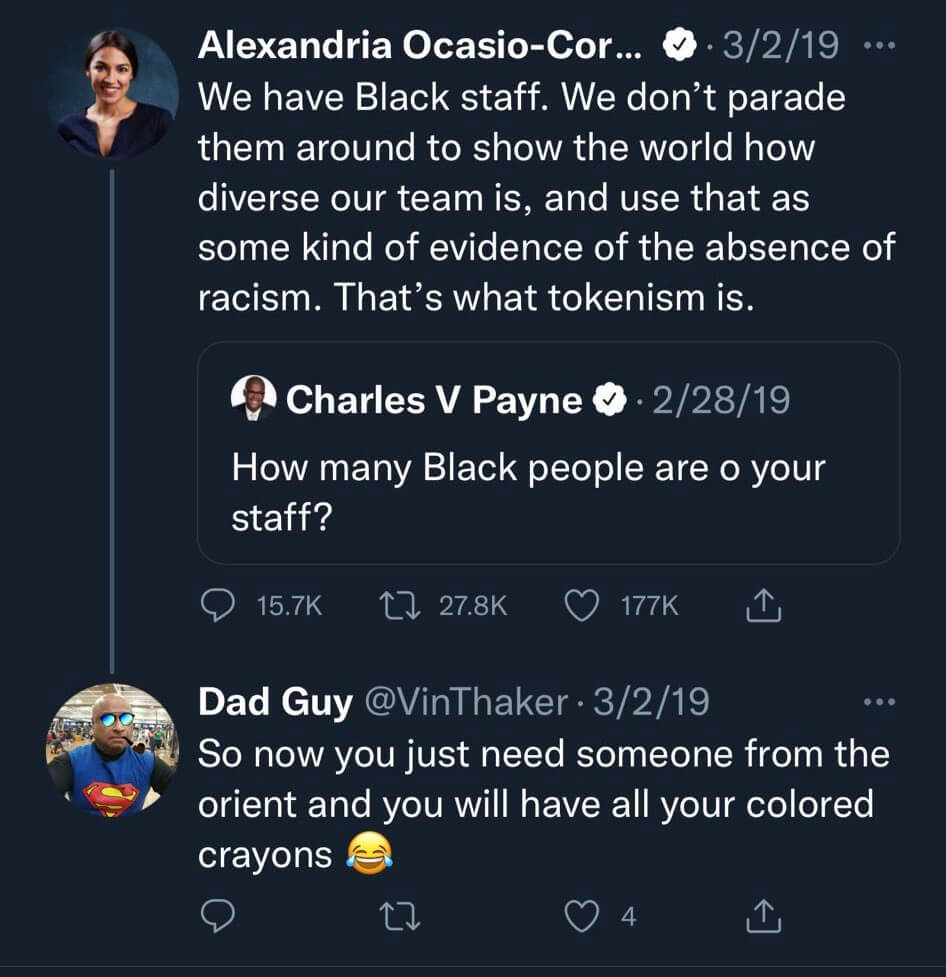 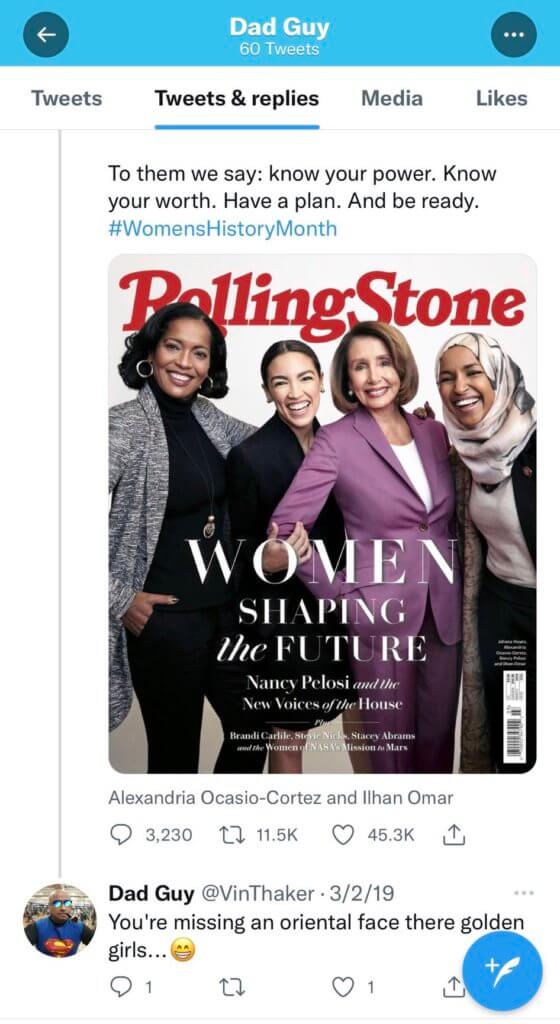 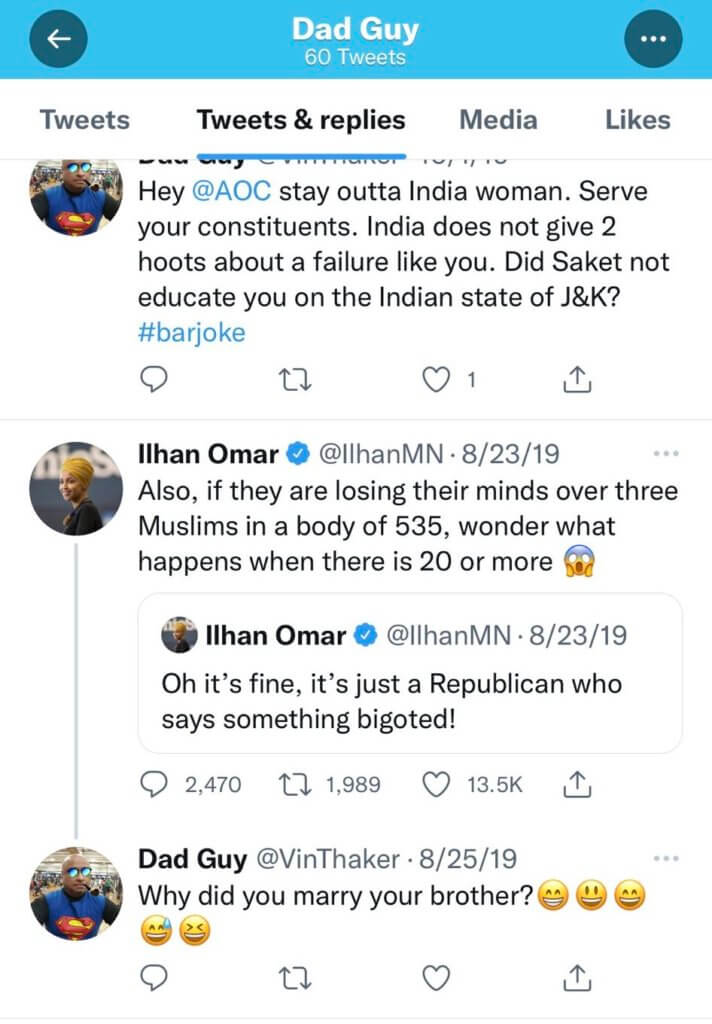 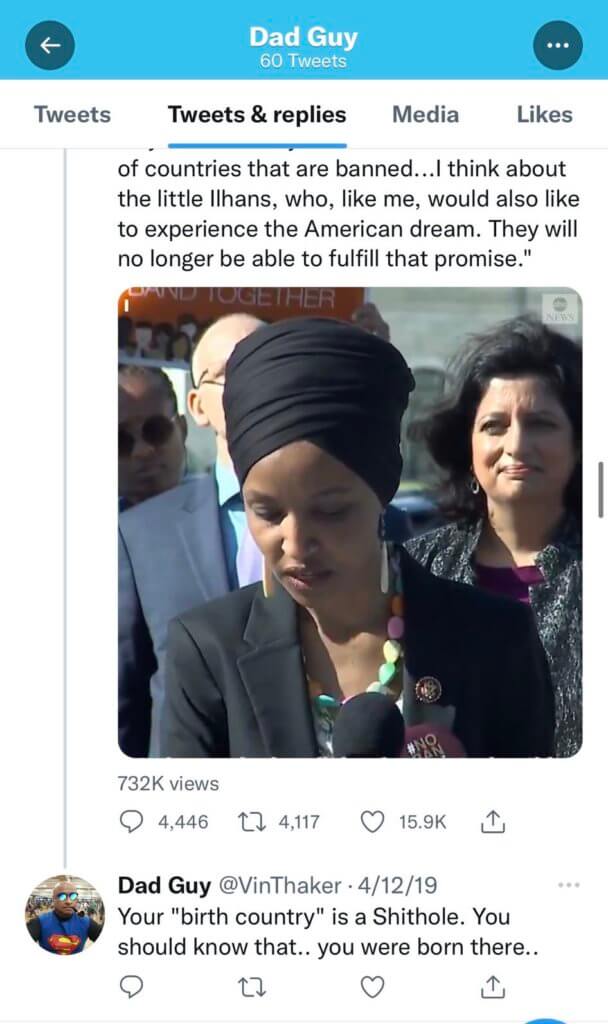 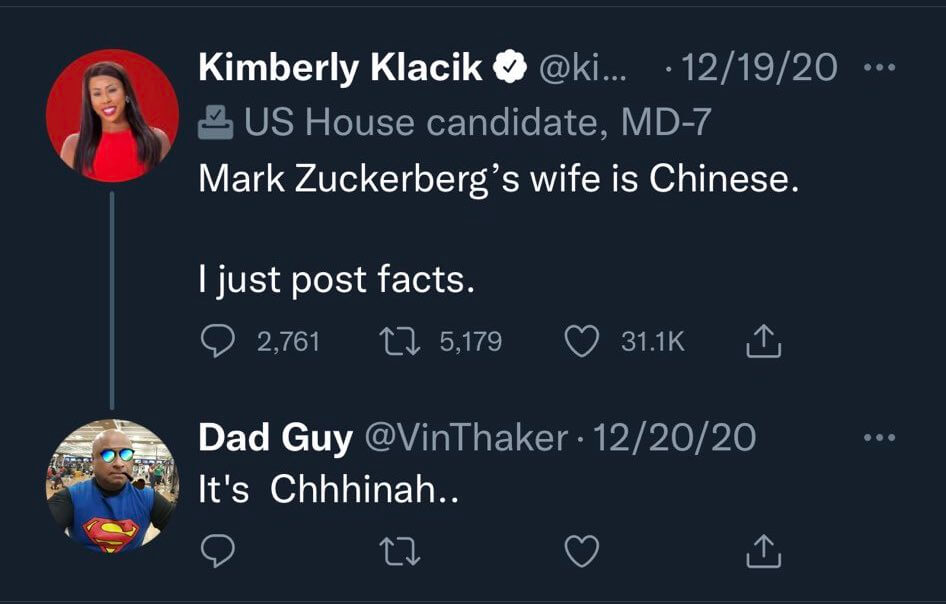 His Instagram is also full of various far-right internet memes, often degrading women or the LGBTQ community in some manner. 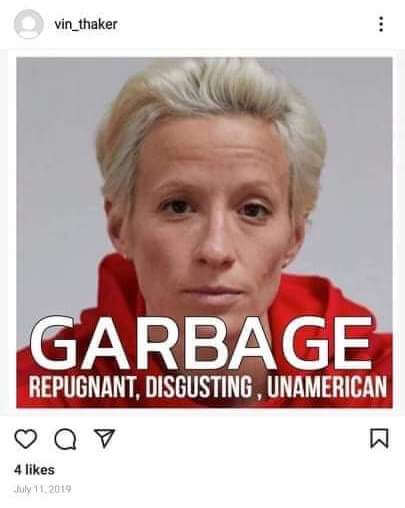 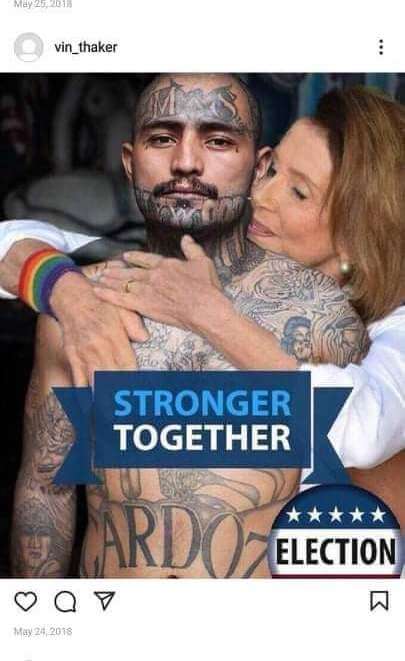 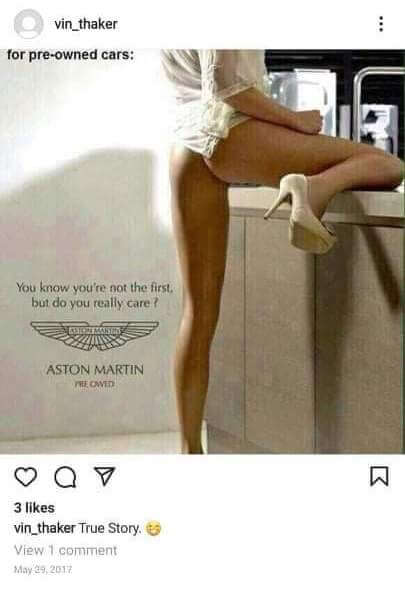 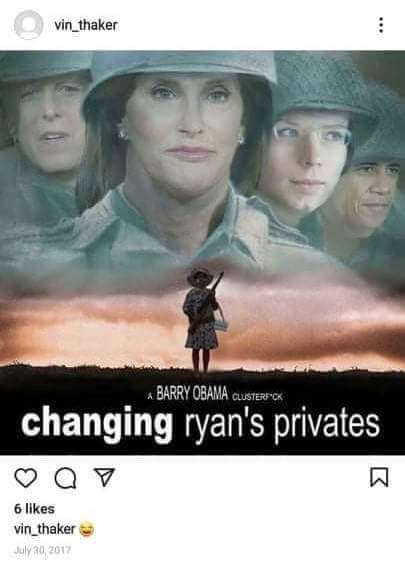 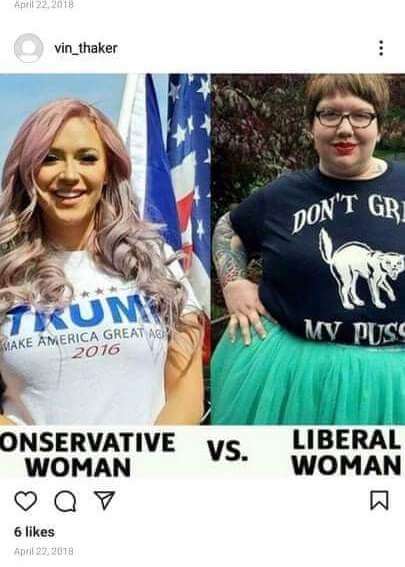 Throughout the campaign, local Democrats have tried to make an issue out of multiple school board candidates having supported Donald Trump in the past, though there’s still plenty of Trump voters within these school districts that likely don’t mind.

Thaker, however, is not so much a Trump voter as he is a Trump fanatic, and anyone who’s watched US politics the past several years are well aware of the difference. 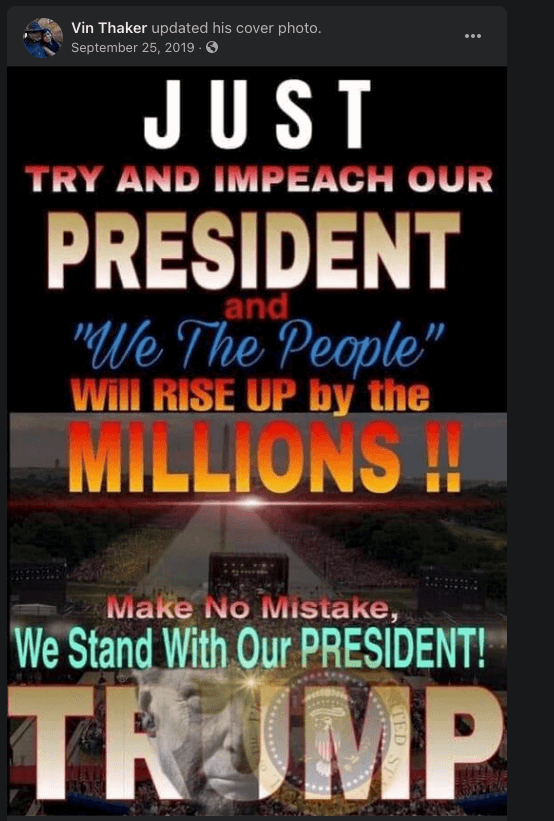 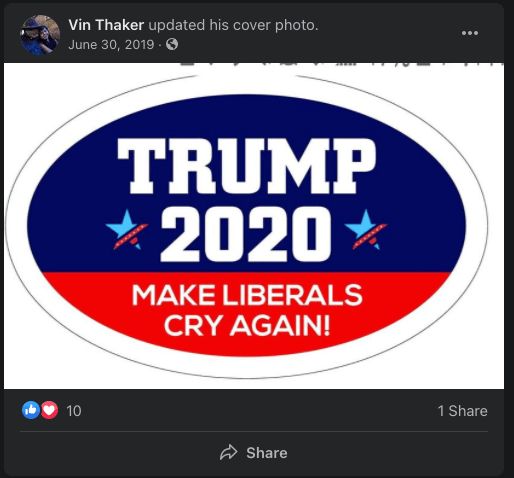 In the current state of how our national politics plays out in social media, you can probably find a handful of tweets or Facebook posts from just about anyone that they might wish they could do over again and not post. Passions and emotions have run high in recent years, and Americans of all backgrounds have expressed their anger online in some manner.

But Thaker’s history of posts show a clear trend of hyper-partisan, far-right and derogatory memes taking up a good portion of his online public persona in the years before he was a school board candidate. 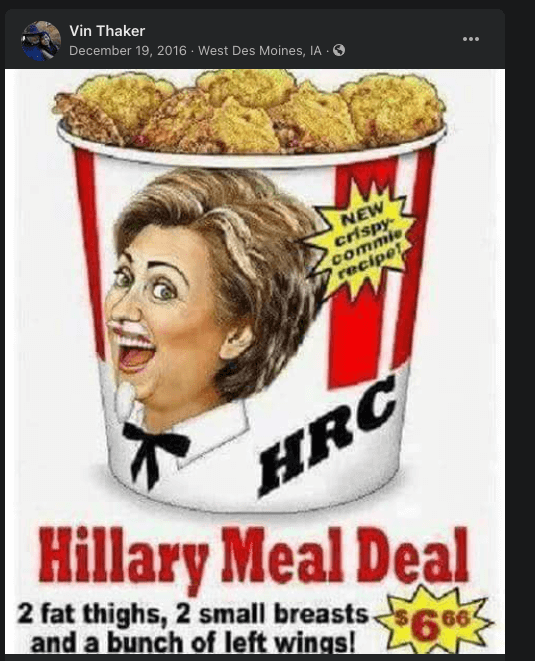 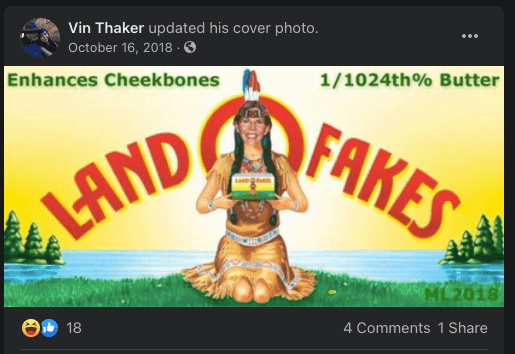 Finally, Thaker is also the kind of person who is often questioning how local businesses will “make it right” when service doesn’t live up to his or others’ expectations. Even in these reviews from his Facebook page (which have since been removed), Thaker inserts various racist and degrading rhetoric into his writing.

“They should hire servers more friendly not one who look like illegal immigrants and think that you’re the ICE officer,” he writes in one restaurant review. 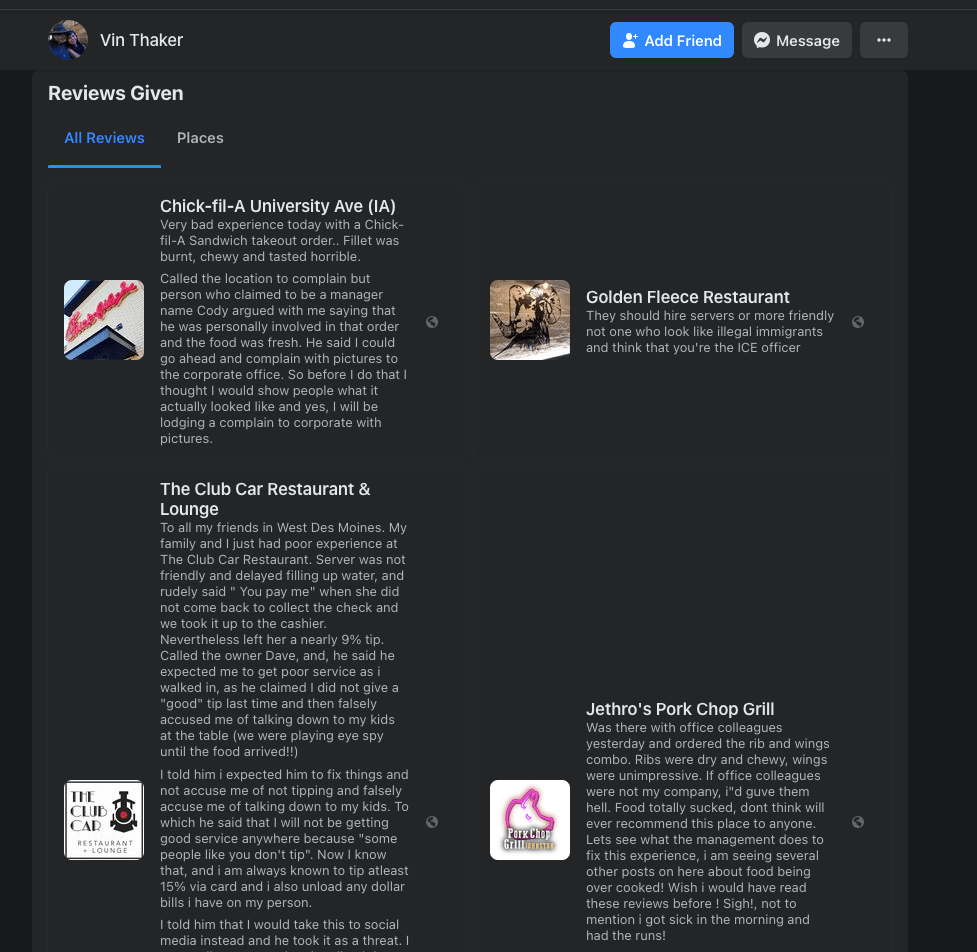 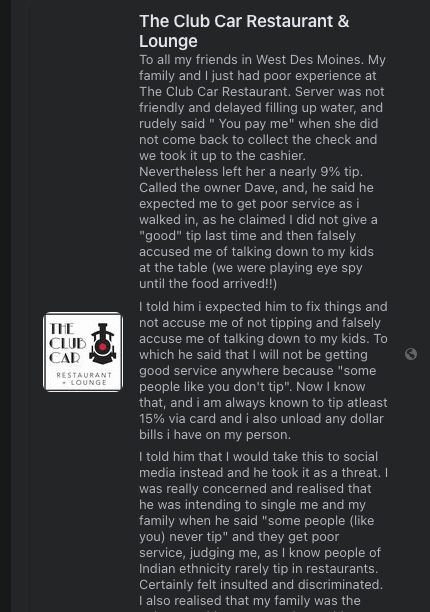 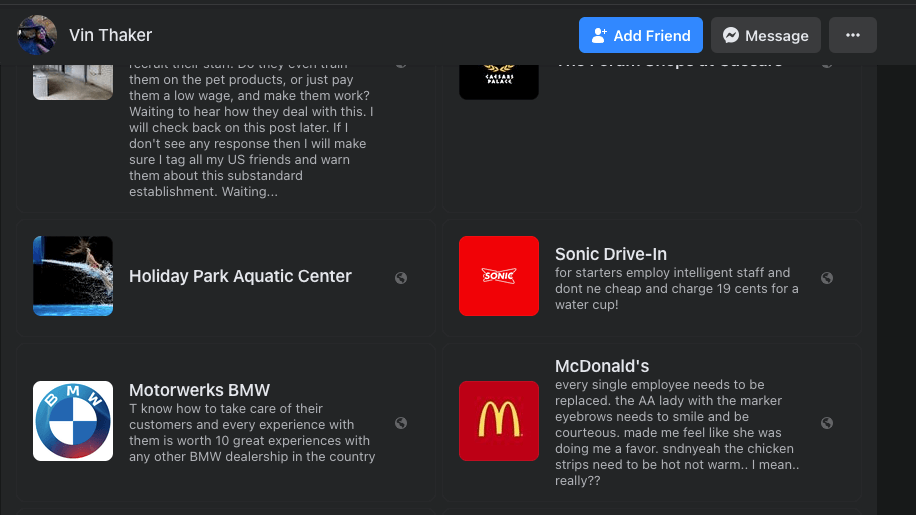 Thaker, of course, is not a solitary candidate in his bid for the Waukee School Board, but part of a four-person team that have all campaigned closely together. Andrea Lawrence, Jeff Rubino, and Morgan Hughes have run as a ticket with Thaker, pushing for greater parental involvement in school decisions and targeting critical race theory (which is not being taught in Waukee schools) and the district’s recent equity standard.

The group has often pushed back against criticism that they are opponents of diversity and inclusion efforts in the school district, saying they simply are combating politics being brought into the classroom. Thaker’s history of racist and sexist language casts obvious doubt on the notion that there aren’t any other motives behind his or the team’s intense focus on how race and sexual orientations are being brought up in school.

Starting Line reached out to Thaker late last week to see if he wanted to comment at all on his past social media posts or provide better context. He responded with a statement restating the objectives and vision of his candidacy.

It is in full here:

“My passion is and always has been finding solutions to complex problems to make life simpler. I have an analytical mindset and love watching documentaries to better understand how all things are connected.

The Waukee Community School District is growing rapidly, and we have an increasingly diverse population. I’m running for school board because I’m uniquely positioned to understand students and parents from different backgrounds, particularly those from the Indian, Asian, and Arab diaspora. In addition, I’ll bring a fresh cultural perspective to the boardroom.

I believe that every student, regardless of their special characteristics, should learn in a classroom free of discrimination, indoctrination, and ideological activism. My passion for delivering collaborative solutions based on diversity of thought, culture, and perspective positions me as the candidate who will unify differences and help parents, teachers, and administrators work together as one team.

I will work hard to help all students achieve their potential. And here’s how we’ll work together on behalf of our educational community:

Our children are the future of this country. And while and we might not agree on what that future looks like, there is always common ground to be found. I’ll work to find that common ground for all our kids.

I appreciate your support!”