Democratic activists and candidates gathered on a sunny, hot field on Saturday for the Polk County Democrats’ annual Steak Fry, which returned to an in-person setting this year (with plenty of COVID precautions). Illinois Rep. Lauren Underwood keynoted the event to give an excellent look at what young leadership in Congress looks like, while Iowa Democrats’ 2022 candidates used it as a chance to build excitement for their campaign.

Just as in past years, it was a good chance to size up the current Democratic field and overall trends in the party. And it’s an opportunity for me to finally write a little bit of analysis on Iowa politics for the first time in a while (or to write about anything, really).

Here’s a couple of takeaways I had from the event.

For several Democratic candidates, this was the first time they were introducing themselves to Central Iowa activists. Most of them led with personal stories emphasizing humble roots as a counter to the online imagery of Democrats as out-of-touch elites.

“I grew up in a trailer off a dirt road,” current 2nd District candidate Christina Bohannan said. “Neither of my parents graduated high school. My dad had grown up on a farm, but they couldn’t really make ends meet, so he quit school and became a construction worker … Because I got a fair shot, I stand before you here today, a candidate for the US Congress.”

Liz Mathis, running in the 1st District, is best known from her days as a TV anchor, but she led her speech talking about being raised on a family farm, detasseling corn, and mowing a cemetery for money she used to pay for college. 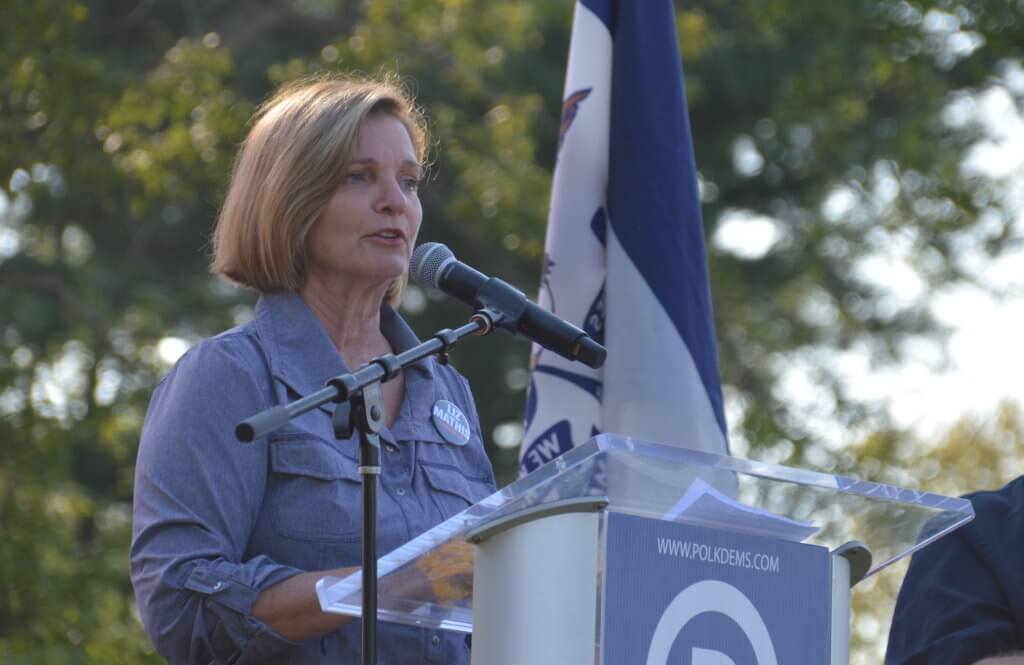 State Rep. Ras Smith, candidate for governor, spoke of how his grandmother and father, who grew up on a sharecropping plantation in Mississippi, got in the back of a station wagon to flee to Iowa in 1957, as well as the Grundy County family farm of theirs.

Because Theresa Greenfield lost in 2020, the analysis from some afterwards dismissed everything she did as a failure. But I still contend that she did a far better job in her ads at presenting herself as a relatable Iowan than previous top Democratic candidates in this state did—Greenfield’s loss was due to other factors.

So it was encouraging to see Democrats continue on that improvement and stress some more relatable personal stories to first build up trust with voters instead of just hitting them with bland, poll-tested policy messages. There was substance there too yesterday, but for that to resonate with Iowans, they need an authentic image of you personally to combat the national partisan attacks that inevitably come.

Taking It To Republicans

There were no mincing of words from the speaker lineup as they laid out the case against Republicans in 2022.

In an energetic speech, Rep. Cindy Axne blasted many of her Republican House colleagues who “consider [the Capitol insurrection] inconsequential” by voting against the investigation, then targeted Gov. Kim Reynolds’ handling of the pandemic. 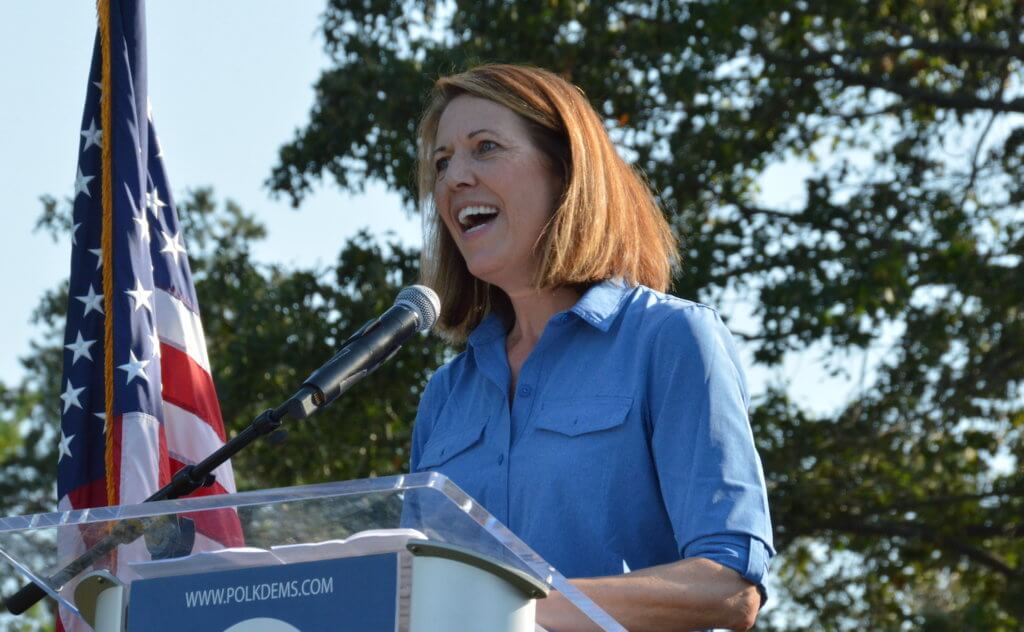 The new congressional candidates started to lay the groundwork against their potential Republican opponents.

“There are some differences between my opponent and me,” Mathis said. “I was not born with a silver spoon in my mouth. I was raised on a family farm. My dad was a veteran of World War II. My mom was a teacher in a one-room schoolhouse.”

“We do not need someone who tells a lie about a deadly virus that has killed thousands of Iowans,” Bohannan said, likely referring to any number of instances where Rep. Mariannette Miller-Meeks shared false or questionable views about COVID-19.

The two new secretary of state candidates were also blunt in their criticism of Republicans’ new voting laws and incumbent Paul Pate.

“Folks, what’s call that for what it is: voter suppression,” said Linn County Auditor Joel Miller. “…What else could we have expected from a crony of Donald Trump?”

“They know they can’t say its fraud, so what they’re doing is changing the rules,” Clinton County Auditor Eric Van Lancker added. “They’re working over the refs, hoping that Iowans lose faith in their voting system.”

Meanwhile, State Auditor Rob Sand discussed religion in politics, calling out Reynolds and other Republicans for turning their Christianity into a political weapon and then not following its actual teachings.

“We’re at a place where someone who’s a leader of that party, who also calls themself a Christian, says we don’t have any space, we have no room to bring in migrant children into the state of Iowa,” Sand said. “Who said, ‘let the little children come to me?’ Who said, ‘welcome the stranger?’ I am so tired of this fiction that Christianity belongs to one political party in this country.” 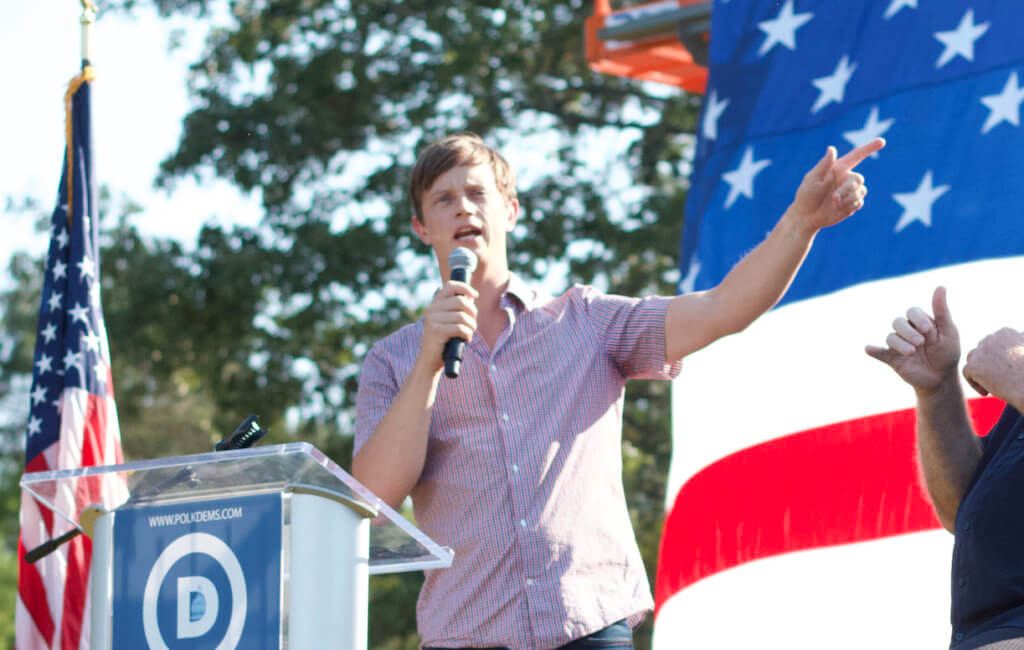 And yeah, sure, it’s a Democratic Party event where you expect red-meat rhetoric, but I have noticed most candidates this year taking a harder edge in their messaging in all mediums. It’s a welcome change from some of the Iowa campaigns from recent years that thought picking up swing voters meant being inoffensive to the point where you weren’t standing for anything instead of directly making the case against Republicans. I suppose we still need to see whether that continues in their TV ads later in the cycle.

Miller Anchors An Office For Democrats

The one newsy moment of the day was Attorney General Tom Miller announcing he would seek his 11th term in office. During his speech, Miller laid out his key priorities—wisely spending the funds coming from the opioid settlement and pursuing antitrust cases against social media giants (more from Starting Line on all that later). 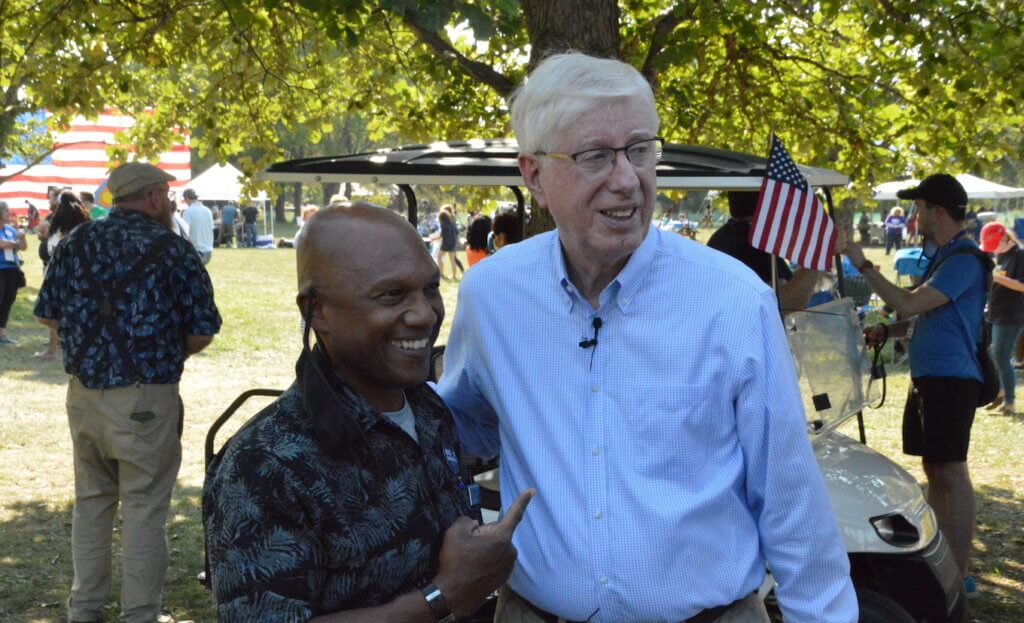 In previous years, some might prefer to see Miller step aside to make space for a new generation of leaders in the office. But it’s not like younger or new rising stars in the Iowa Democratic Party haven’t found their own paths to elected office or prominence in recent years, and given the state of the Iowa’s partisan trends, many Democrats are likely happy to have a strong incumbent running again for a statewide office. Miller’s reelection is by no means a given in this Trumpy era, but it will be helpful to the broader ticket to have him on the ballot again.

For Now, A Lack Of Urgency

While it was great to see Democrats back out at a major event, one couldn’t help but compare it to years’ past and notice the difference. It looked like there were about 250 attendees and another 100 staff, candidates and volunteers on hand. That still registers for a good Iowa political event, but this is the Steak Fry, which is typically the preeminent Democratic event of the year.

No, it’s not a presidential caucus year, and yes, the pandemic is making people cautious about large events (though this was outside, spaced out and you had to be vaccinated to attend), and yes, it was surprisingly hot out for mid-September.

But recall that at this point four years ago in 2017, we had over 20 Democrats running in primaries for governor and the four congressional districts combined—and there wasn’t even a US Senate seat up that year. There was excitement and enthusiasm to flip seats blue (which Axne, Abby Finkenauer and Sand would do) and to push back against Donald Trump’s presidency.

The campaigns that year also mobilized far more individual supporters than were seen at this year’s Steak Fry (though this year DeJear did have a nice crowd with her on stage and Finkenauer made an entrance with a fire truck). Our story four years ago put attendance at about 1,500, and several campaigns staged large rallies and marches before the event. Also in 2017, there felt like a sense among the crowd that these moments mattered, because the primaries were hotly-contested and there was momentum heading into next fall’s elections.

There has not been a similar scramble this year for the party’s nominations—Democrats have one candidate/incumbent apiece for three congressional districts, and everyone has sort of shrugged off the fact that there’s not even serious names for the 4th District. The gubernatorial field has not taken off as some expected despite the Democratic base’s intense desire to defeat Reynolds, which has led to others seriously considering jumping in later than usual (Sen. Pam Jochum is openly thinking about it while a few other names are circulating behind the scenes). 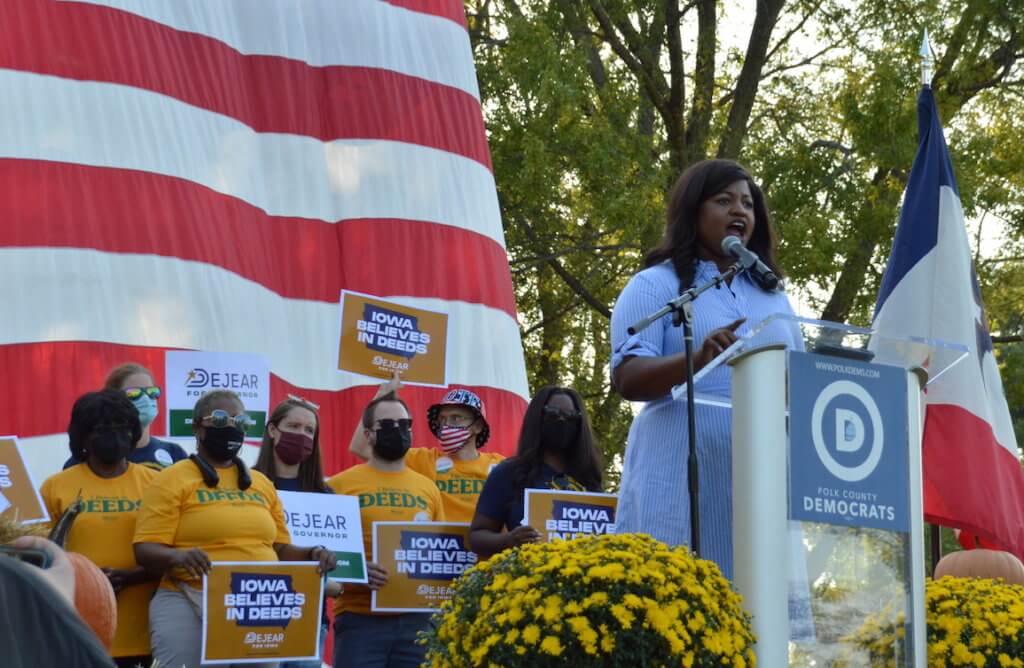 For the time being, it feels like the party’s activist base’s attention is focused elsewhere, on school districts and mask mandates and Reynolds’ COVID actions. Or, as I’ve heard in plenty of personal conversations, there’s still some lingering burnout from 2020.

It’s too bad that there aren’t more Democratic eyeballs on these campaigns, because they’re missing out on some exciting new candidates.

Democrats outside of Johnson County probably don’t know much about Bohannan other than she defeated an incumbent legislator in a primary two-to-one in 2020. Watching her at the Steak Fry demonstrated how in part she pulled off such feat and why she’s already running for Congress—Bohannan is a dynamic speaker with a down-to-earth personal background that she presents very well. And Mathis’ speech demonstrated that she’s more than living up to the expectations for her candidacy that many in the party have been pushing for since she arrived at the Statehouse in 2011. 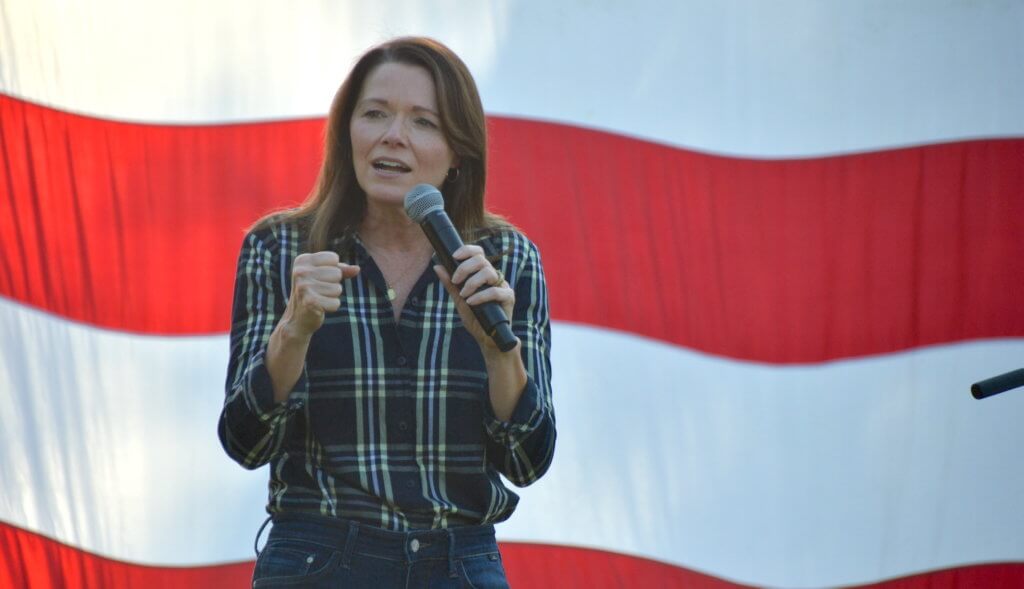 Democrats will really want to quickly get to know these two better if they get paired up in a Lean-Democratic congressional district that combines Linn and Johnson counties, either as they are in this first redistricting map or a different one if the first gets rejected.

And as one last aside, it’s also a disappointment that Democrats across the state don’t get to see this side of the candidates more often. Most of us are only introduced to new contenders through fundraising Facebook ads that boil down to them saying, “Hi, I’m running against that Republican you don’t like. Give me $5.” But that’s a story for another time.