The Steak Fry returned to Iowa in style today, with perfect weather greeting about 1,500 Democrats to Des Moines Water Works Park. The Polk County Democrats pulled off a successful revival of the Tom Harkin tradition, recreating the feel of the annual event that often attracted national speakers and press. The white tents were pitched, candidates flipped steaks, a giant American flag flew behind the stage and campaigns marched noisy supporters into the event.

A trio of national rising stars in the Democratic Party – Congresspersons Tim Ryan, Cheri Bustos and Seth Moulton – keynoted the event. And candidates for the 3rd Congressional District and governor pitched their messages to the crowd, mostly seated in folding lawn chairs, as well. Activists, elected officials, reporters and general attendees roamed the sunny field before and during the program, chatting with folks manning booths for various candidates and organizations.

Stating Line will have another post in a day or two about the keynote speeches and general takeaways from the event. For now, enjoy our photos and brief descriptions of notable moments at the Steak Fry.

Like any good major Iowa Democratic event, campaigns that hoped to show their organizational strength put together rallies and marches ahead of the event. Just like they did at the IDP’s Hall Of Fame Dinner, the Nate Boulton and Fred Hubbell campaigns bought lots of tickets and turned out supporters.

Boulton’s group met in the morning, gathering in a field a little way’s away from the Steak Fry. Boulton, his wife Andrea and State Representatives Bruce Hunter and Amy Nielsen revved up the crowd. Boulton announced that Warren County State Representative Scott Ourth was endorsing him today. 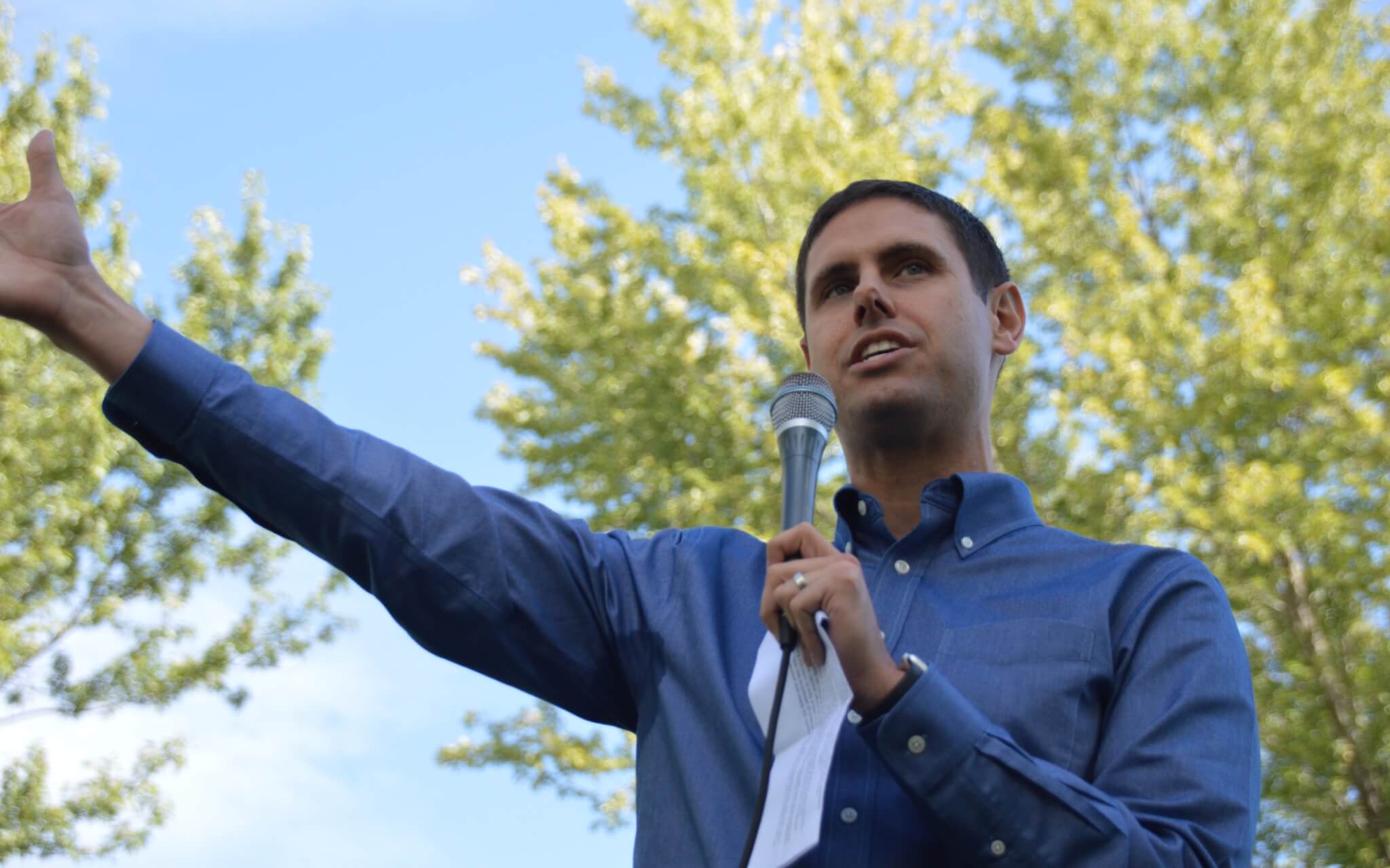 AFSCME Council 61 turned out a lot of members to help out with the Boulton rally. 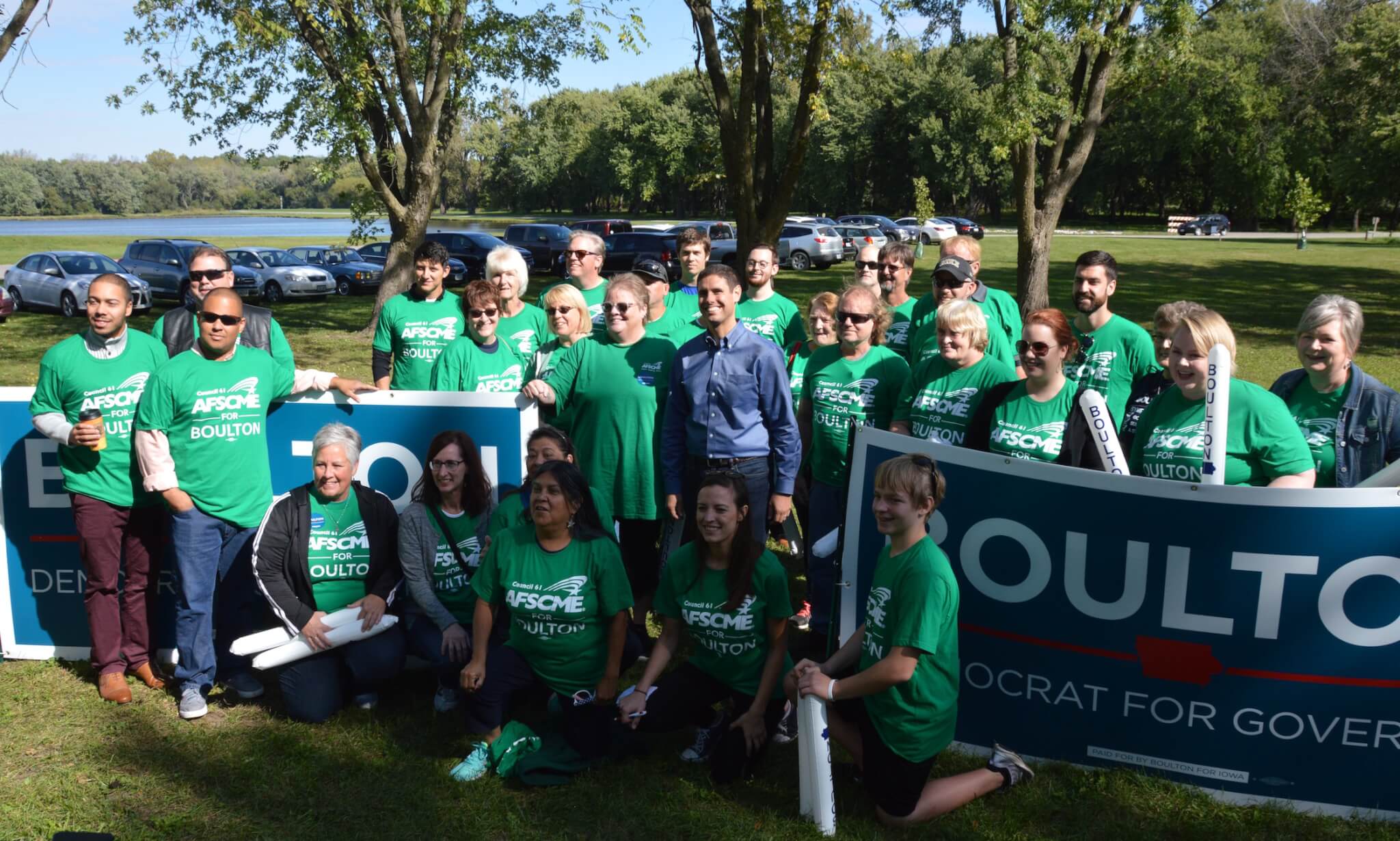 The Boulton campaign passed out thunder sticks to supporters. A lot of younger families were in attendance for Boulton. Attendees to the Steak Fry saw thousands of Boulton yard signs on their way into the event. 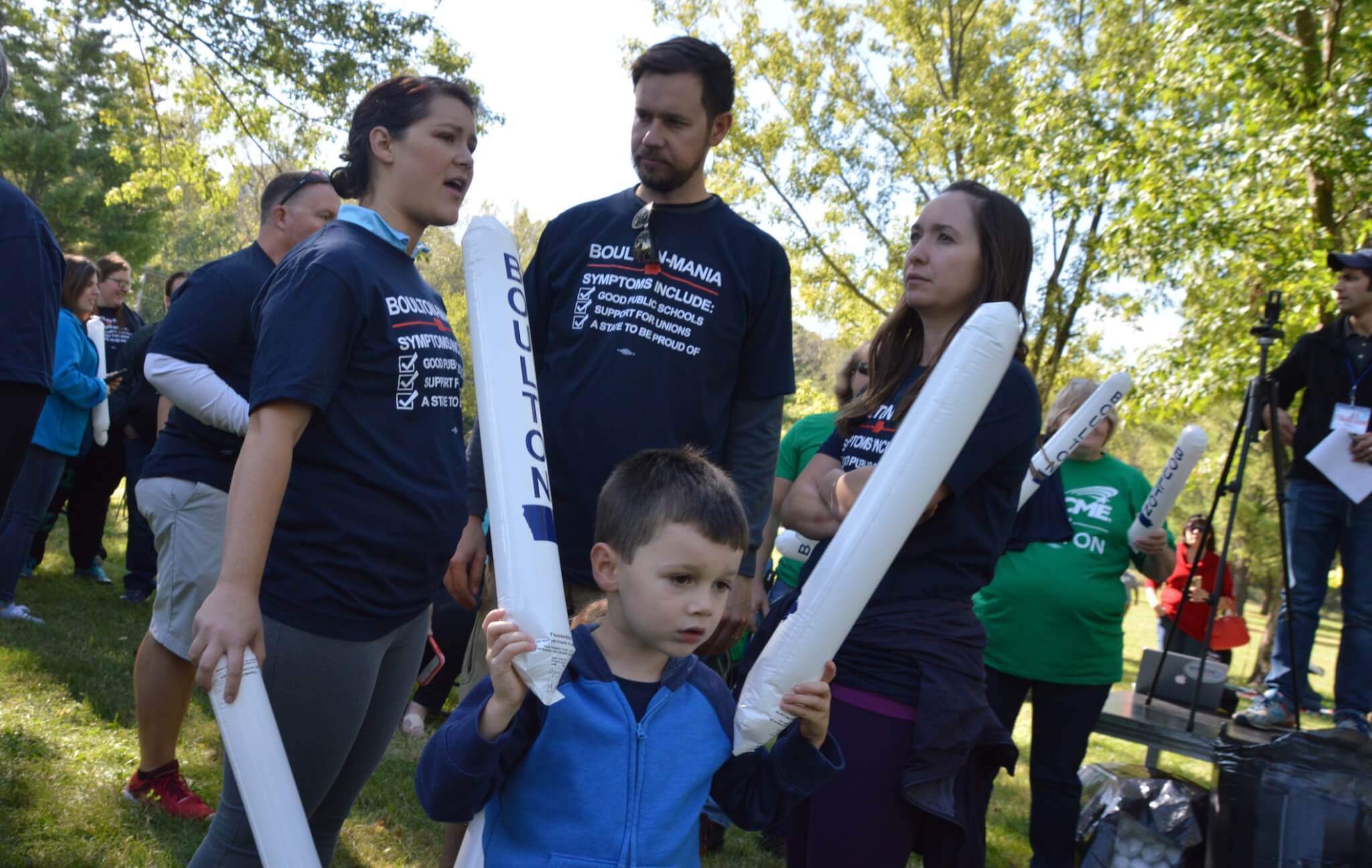 Boulton led about 300 supporters in a march into the Steak Fry. 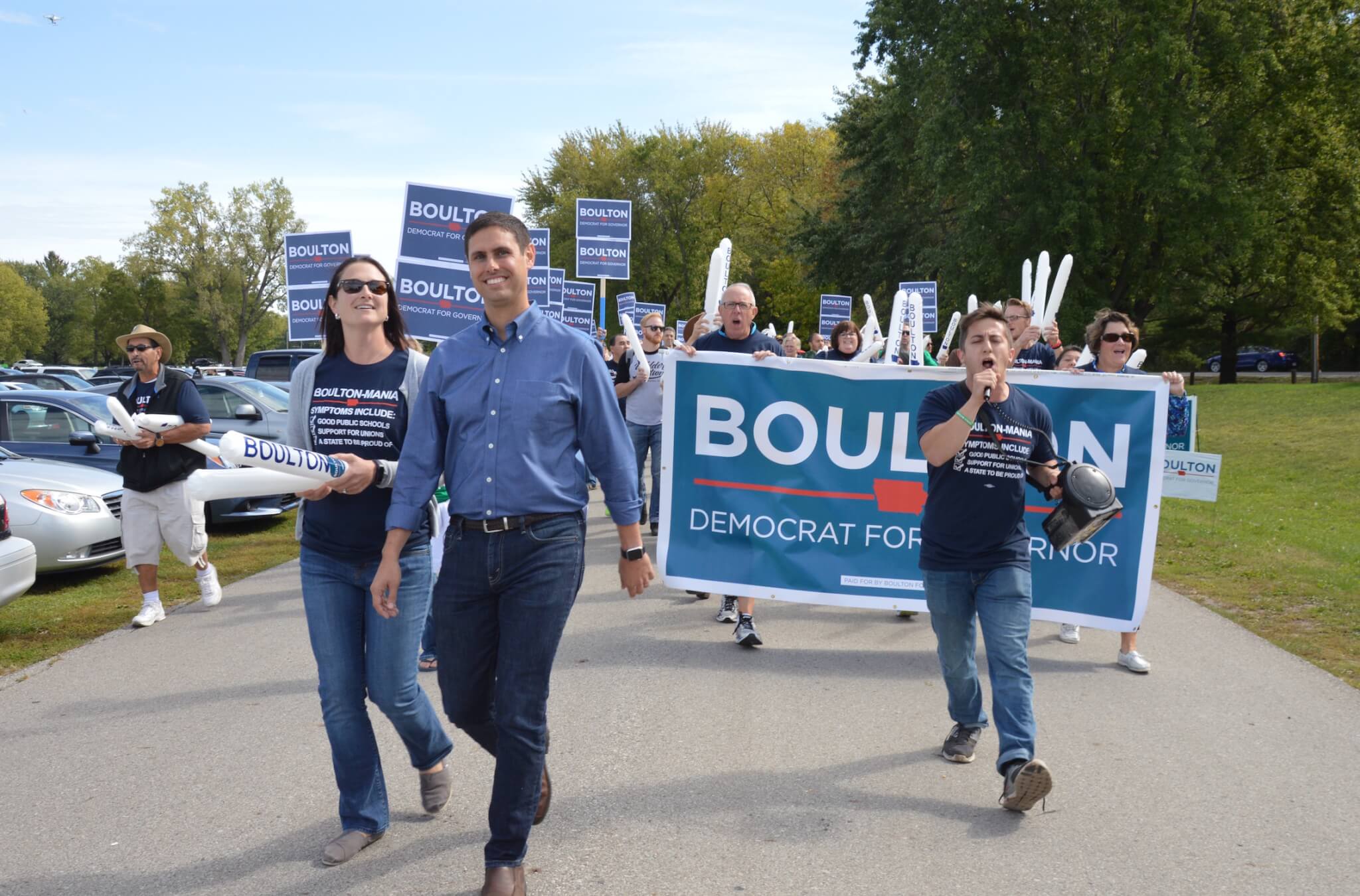 Shortly after Boulton arrived at the Steak Fry, Fred Hubbell rallied his supporters in a nearby field. The Isisierettes, a well-known Des Moines marching band, provided some extra oomph to Hubbell’s rally and march. Fun fact: Democratic candidates who have had the Isisierettes at their events have all gone on to win their primaries over the past decade and a half (John Kerry had them at the JJ Dinner in 2003, Barack Obama marched with them at the Steak Fry in 2007 and Jack Hatch – back when Tyler Olson was still in the primary – had them at big events in 2013). 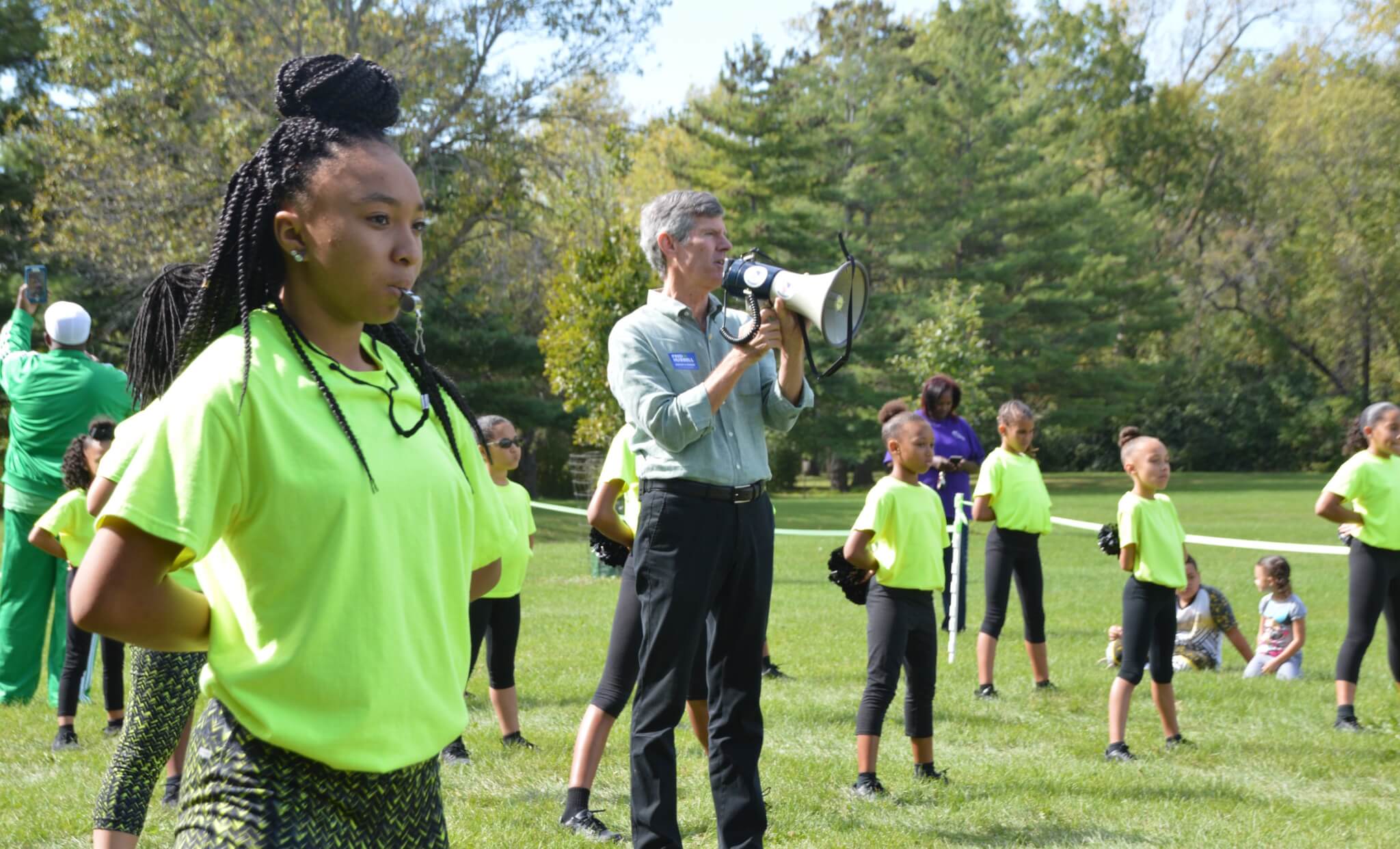 Hubbell surprised his wife, Charlotte, at his rally (to her chagrin), asking his crowd to sing “Happy Birthday” to her. 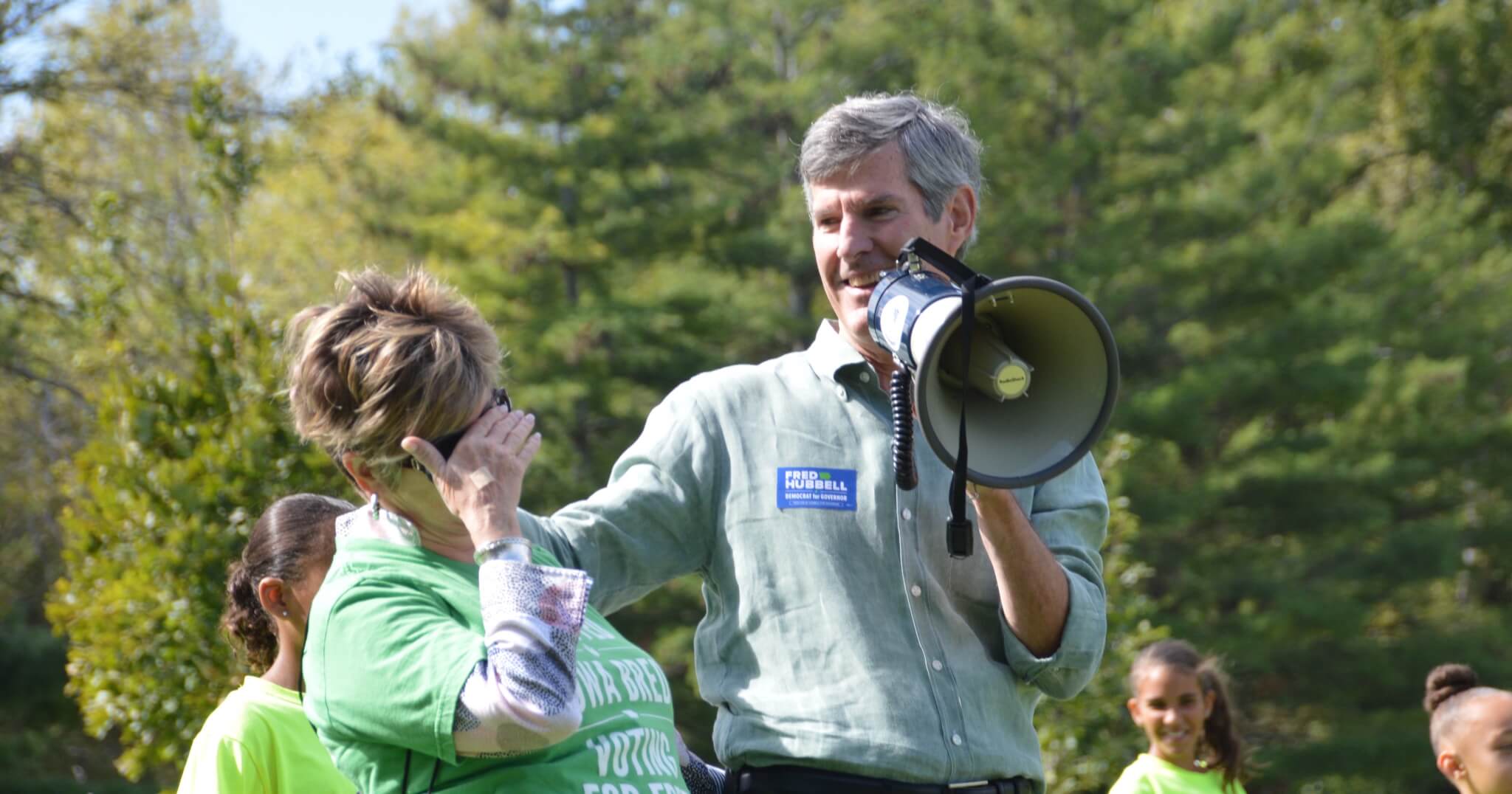 The Hubbells then led their group of supporters on a march into the Steak Fry. 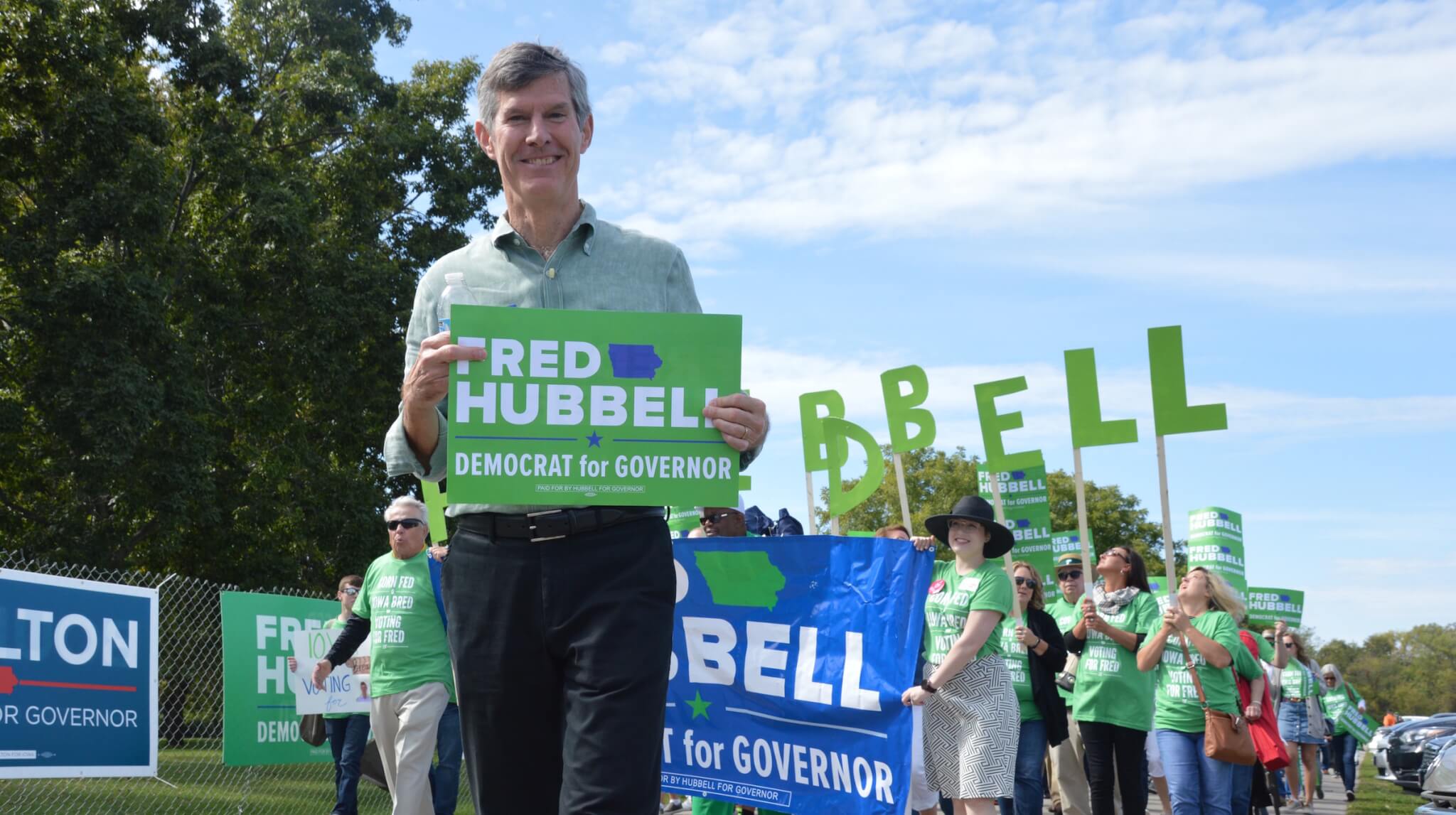 Hubbell, like many of the other candidates, seasoned and flipped some steaks for the amusement of the press. 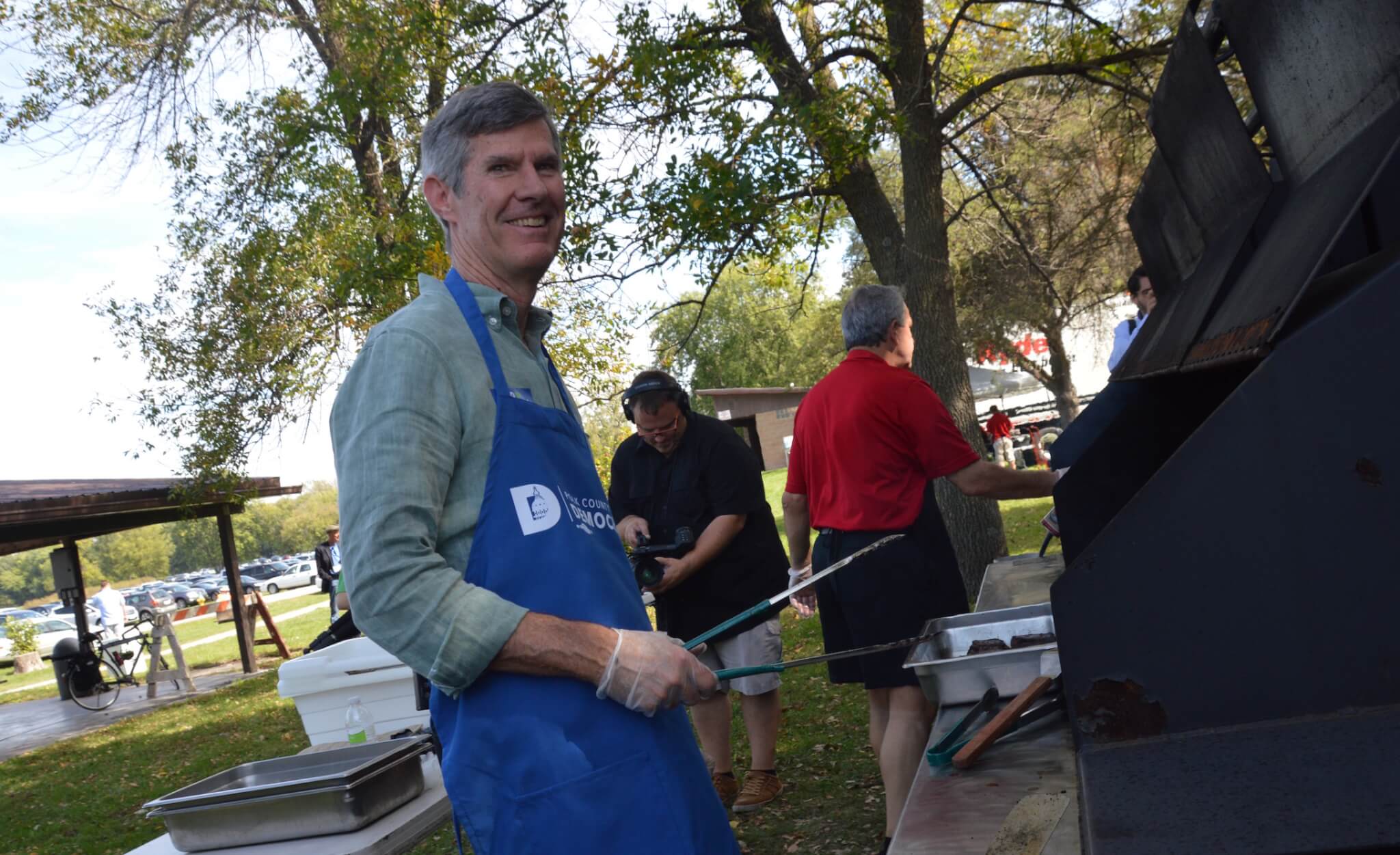 The Steak Fry itself was a well-produced affair. Large signs greeted attendees on their way into the Water Works field. 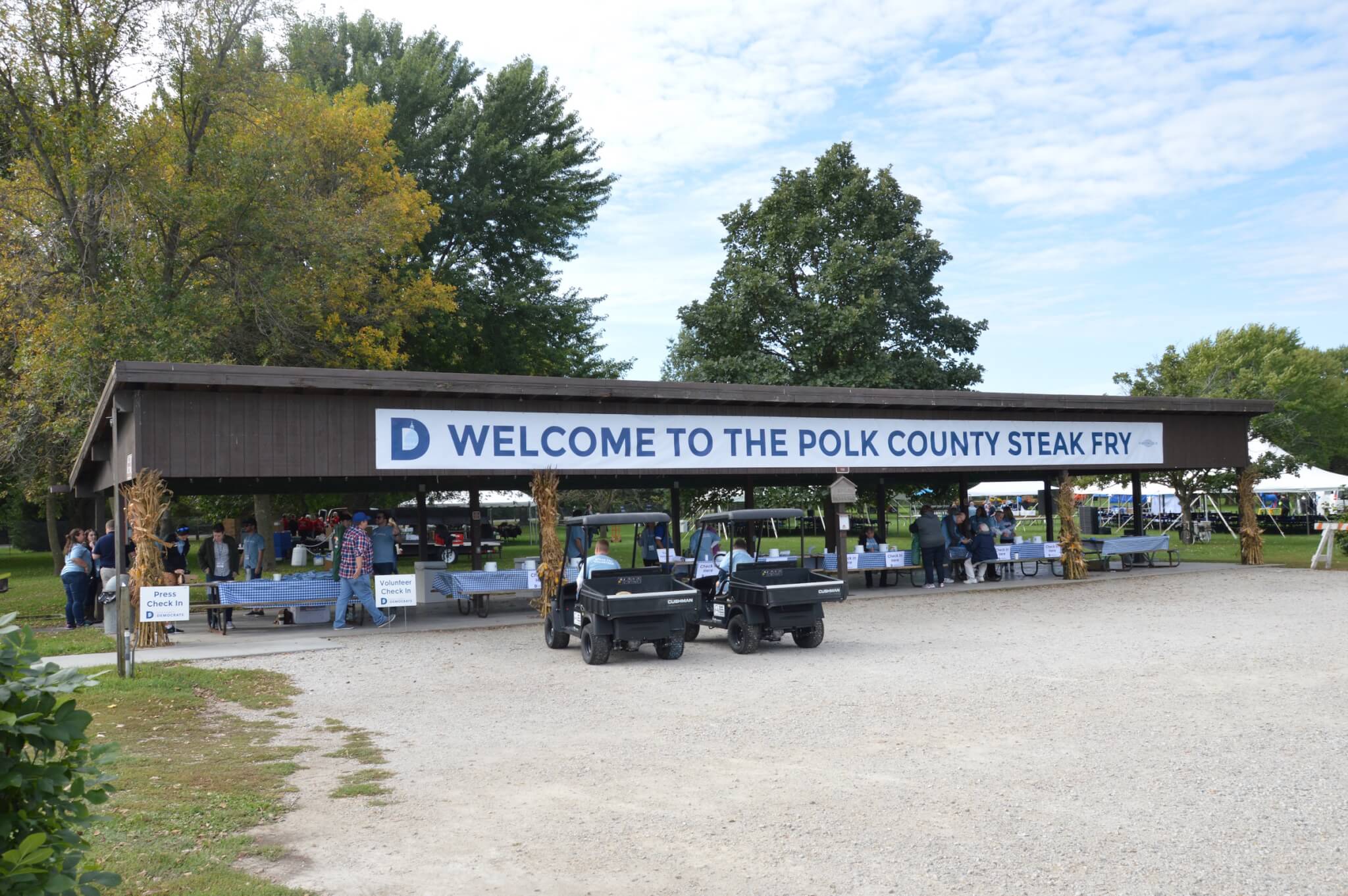 The Polk County Democrats’ new donkey was painted by a local artist throughout the day. The group plans to use the donkey in parades. The weather really could not have been better. 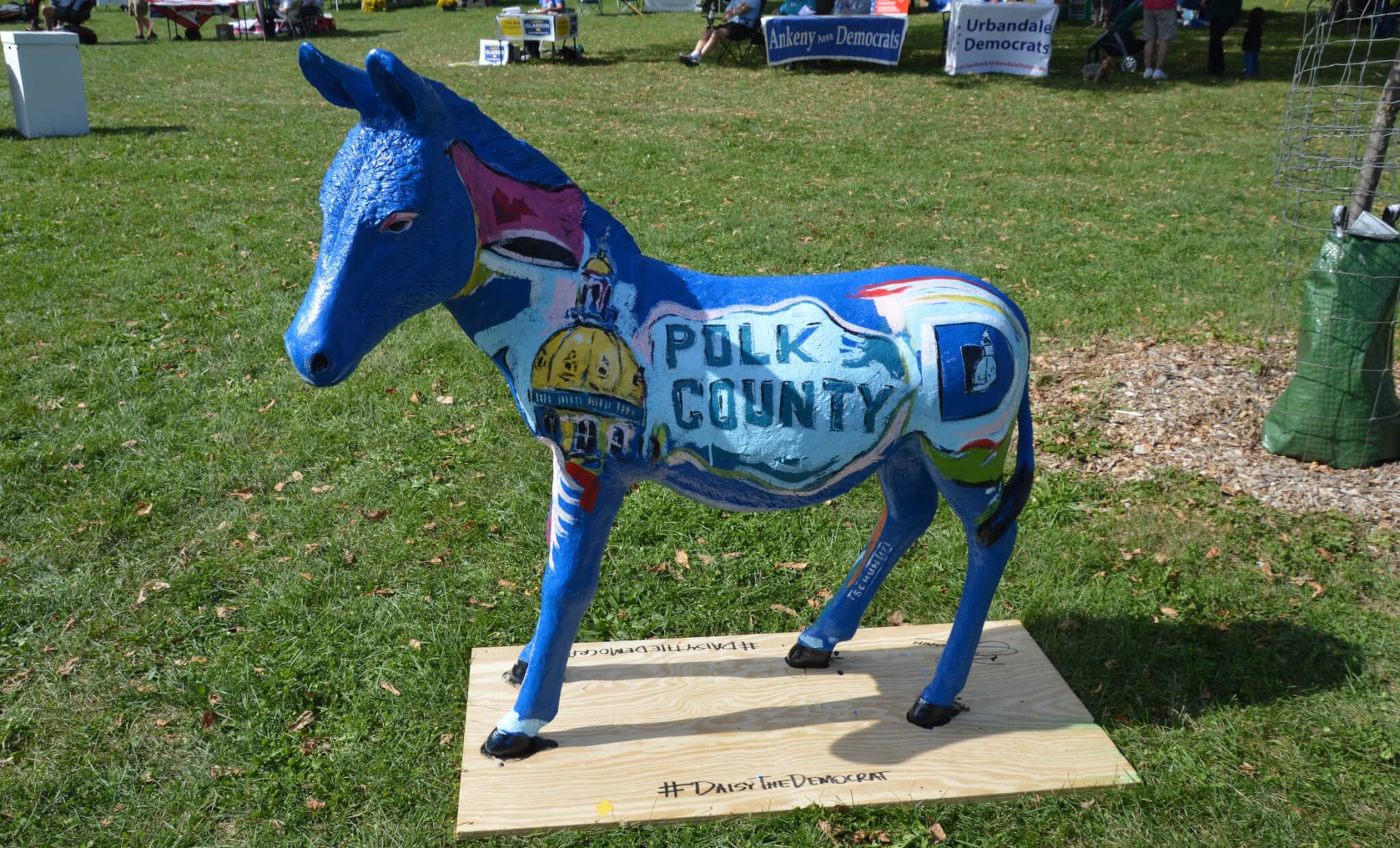 Polk County Democrats Chair Sean Bagniewski bragged that the event sold more tickets than Joni Ernst’s most recent Roast And Ride. Despite criticism from the online commentator crowd, the Steak Fry was rather well-received by attendees and looked like a success from all outward appearances. 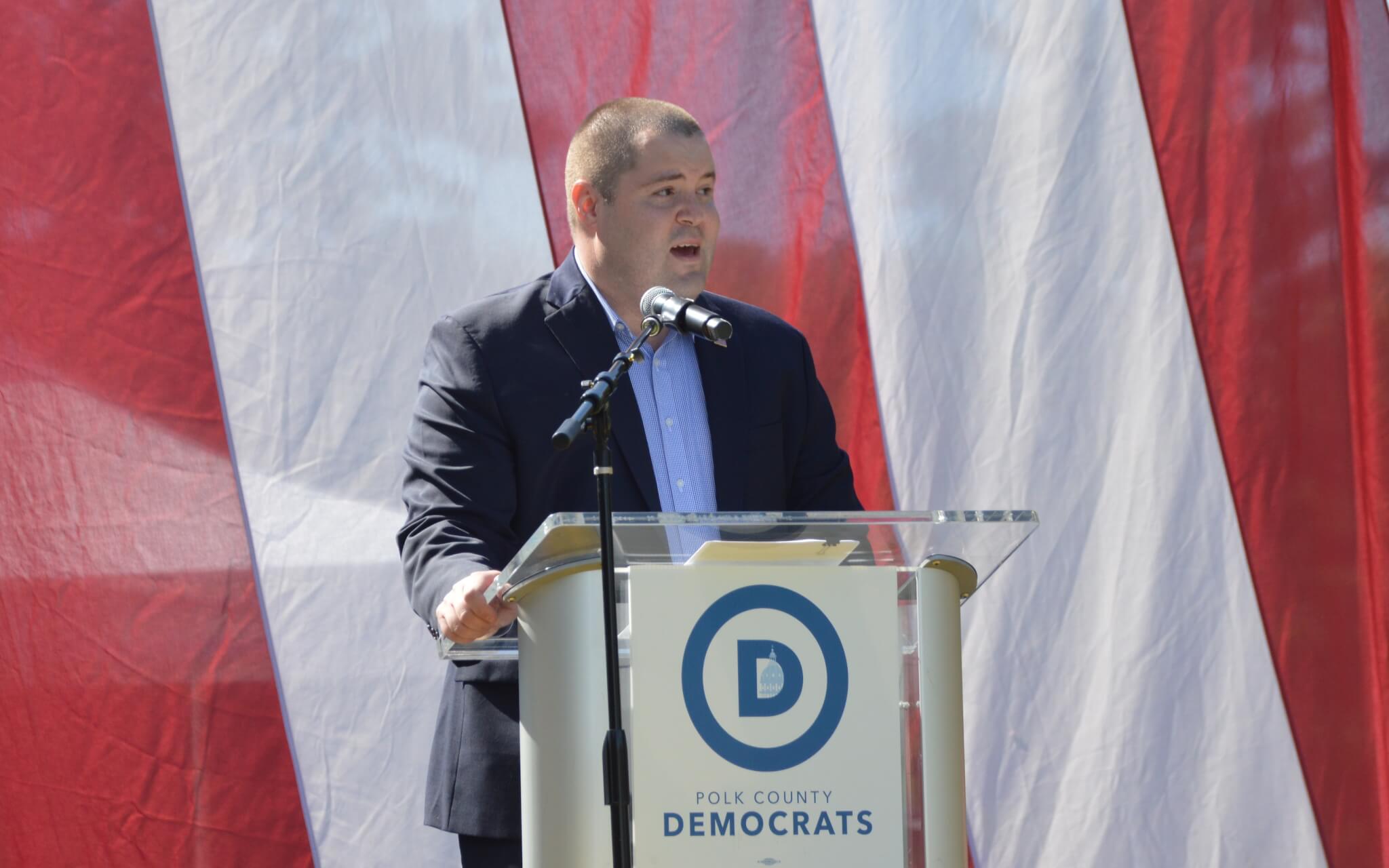 The one frightening moment of the day, however, came when well-known activist Kathleen O’Leary appeared to choke and have a serious medical issue. Gubernatorial candidate Dr. Andy McGuire sprinted to O’Leary’s side and performed CPR. O’Leary was taken from the event in an ambulance, and Bagniewski noted that McGuire may have saved her life. The condition of the activist wasn’t clear later this afternoon. 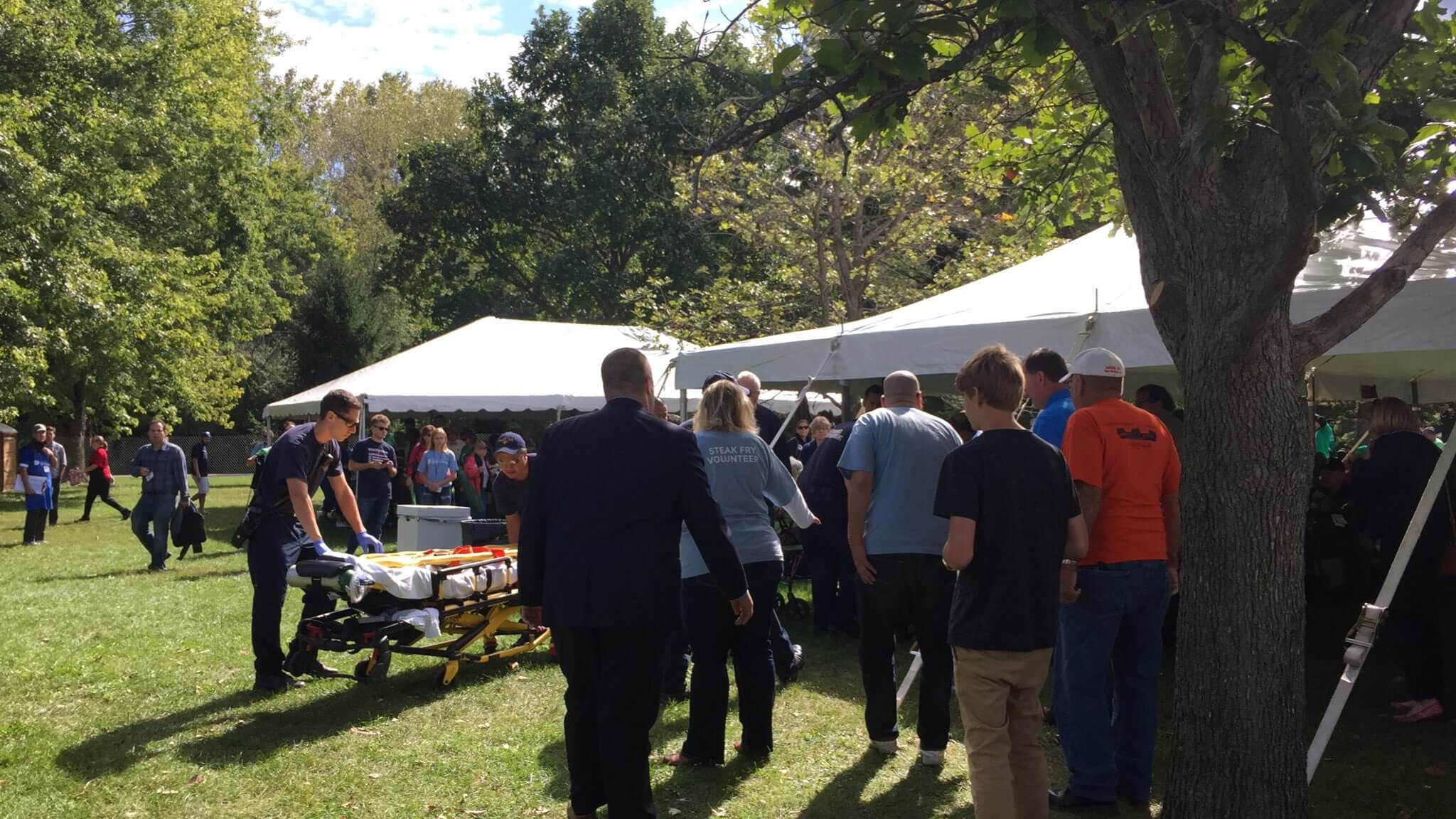 Local Democratic and progressive groups had booths at the Steak Fry. 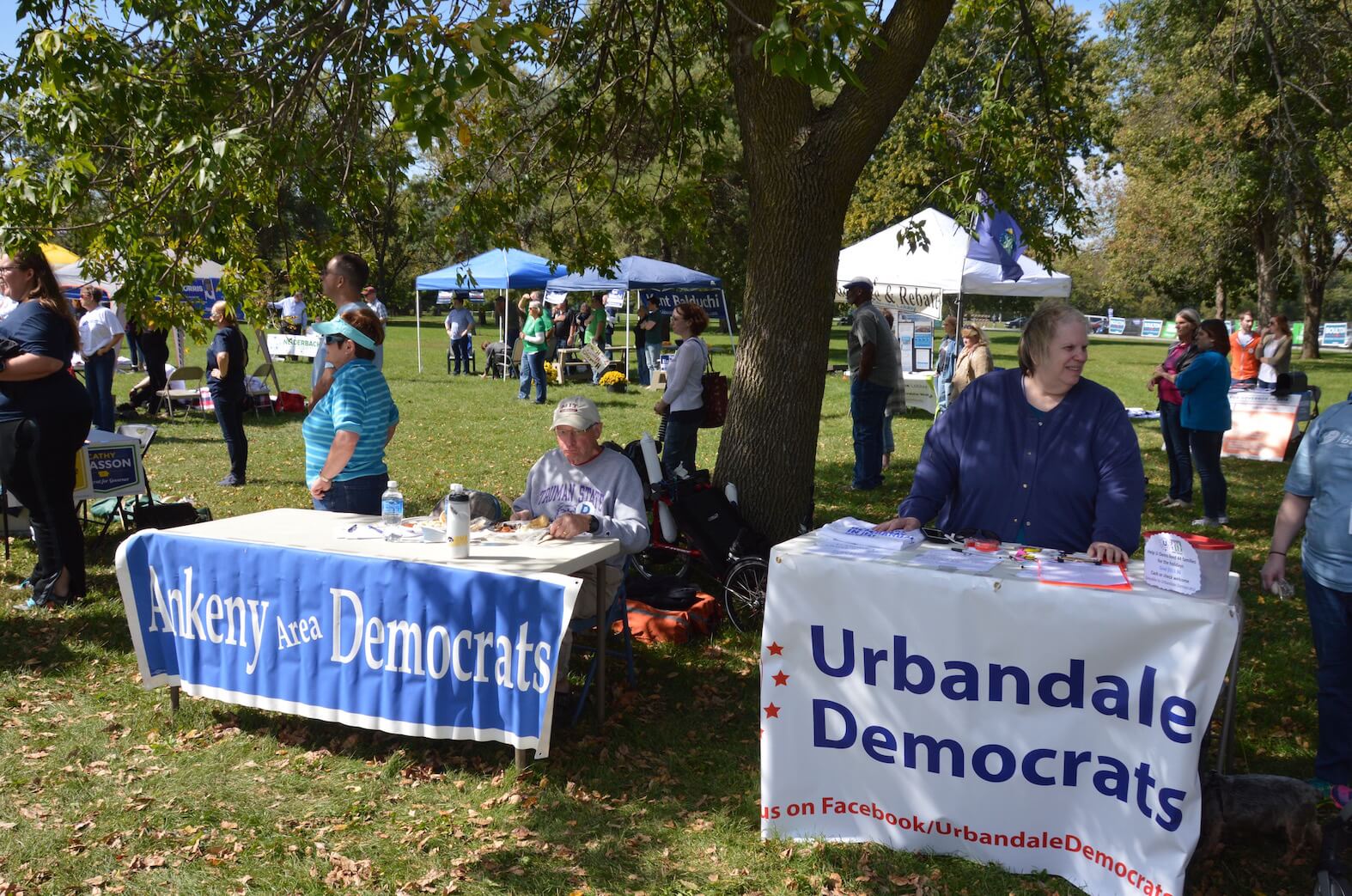 Even the Butler County Democrats showed up to pitch their wares. 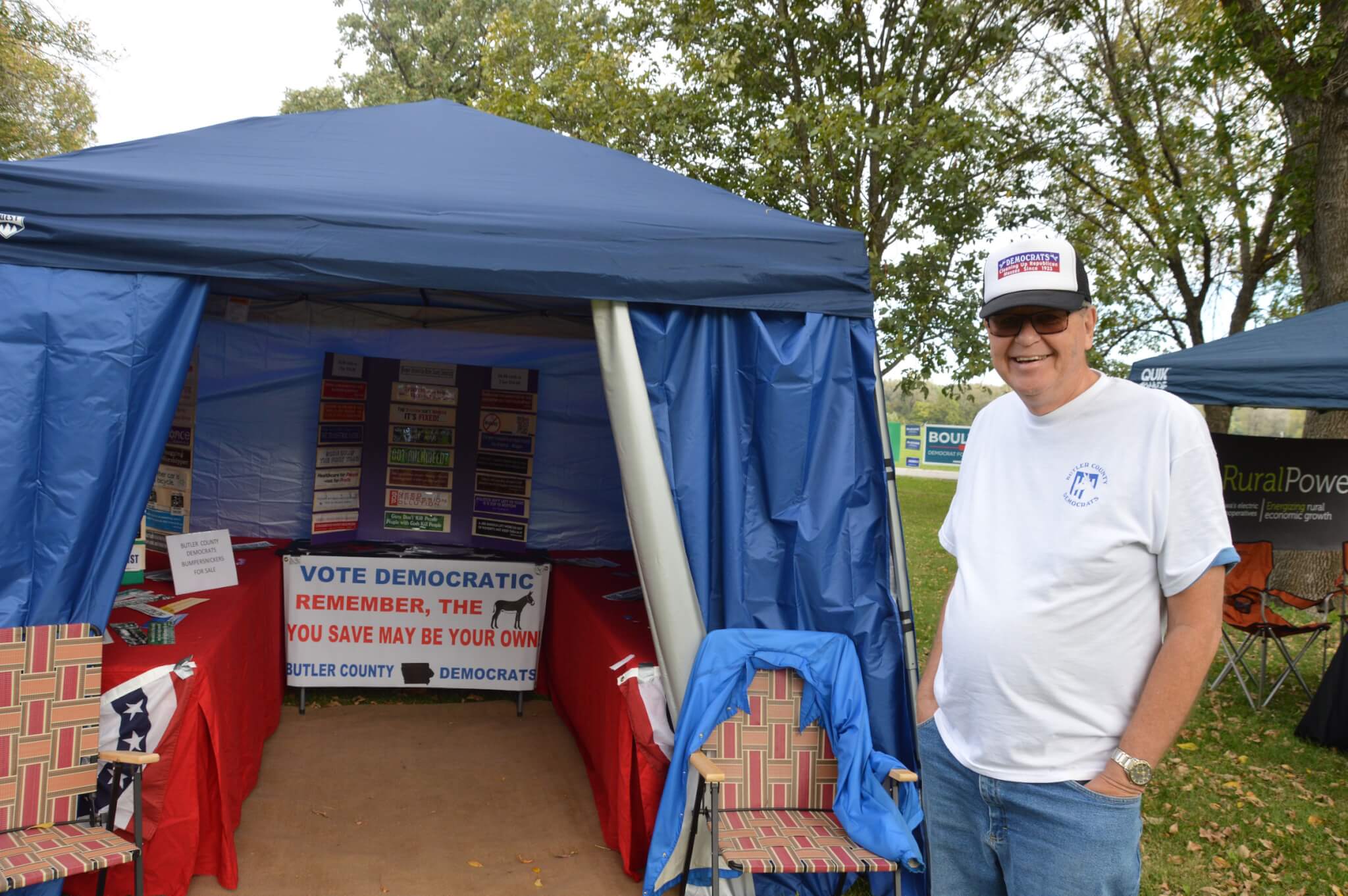 Candidates like Cathy Glasson worked the crowd prior to the speeches. She’s seen here chatting with Congresswoman Cheri Bustos. 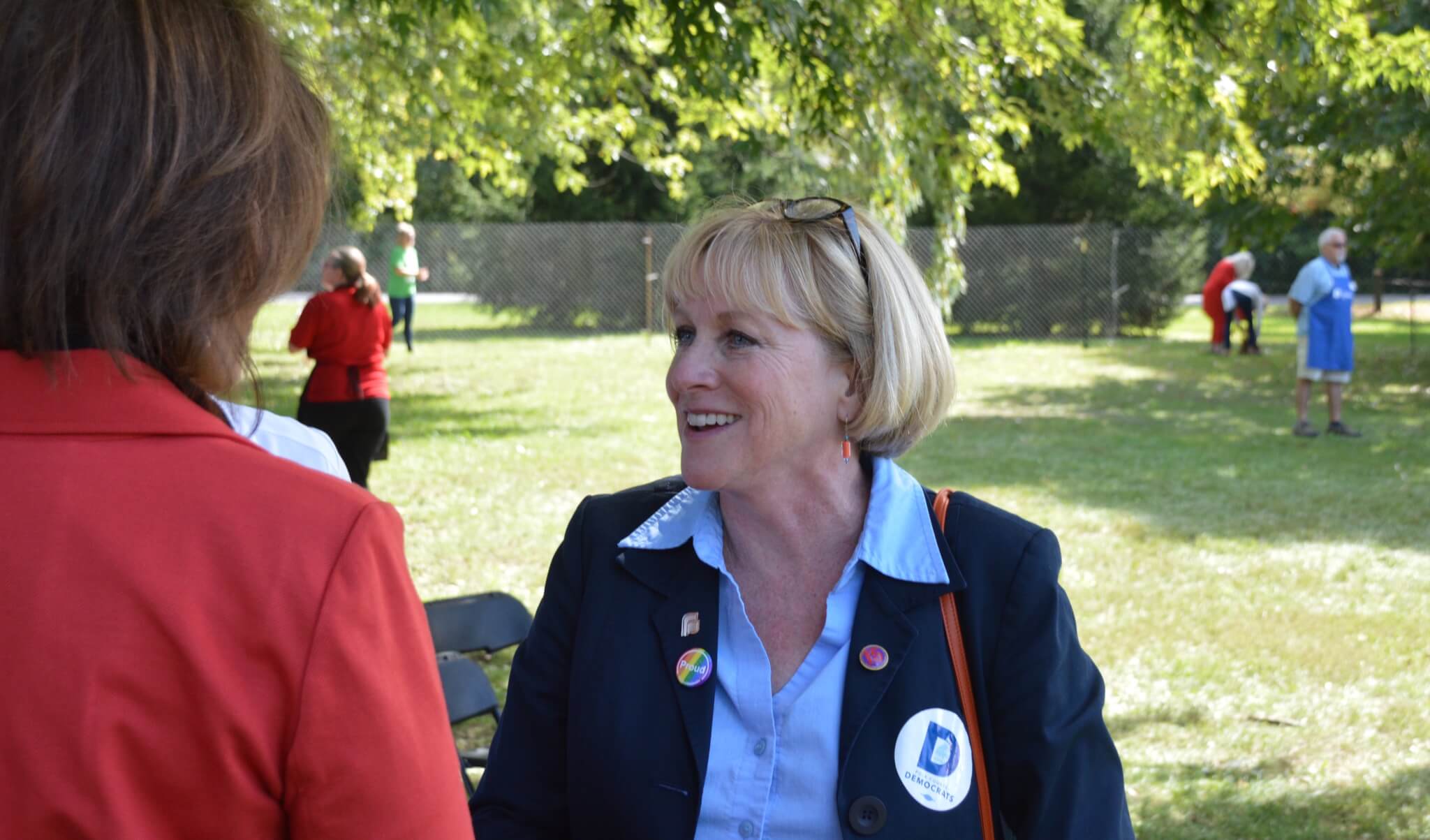 The keynote speakers spoke with reporters, including many national ones who flew into Iowa to cover their speeches and Iowa Democrats’ reactions to them. Here’s Massachusetts Congressman Seth Moulton, who made some trips to Iowa in 2016 to help local candidates, chatting with the press. 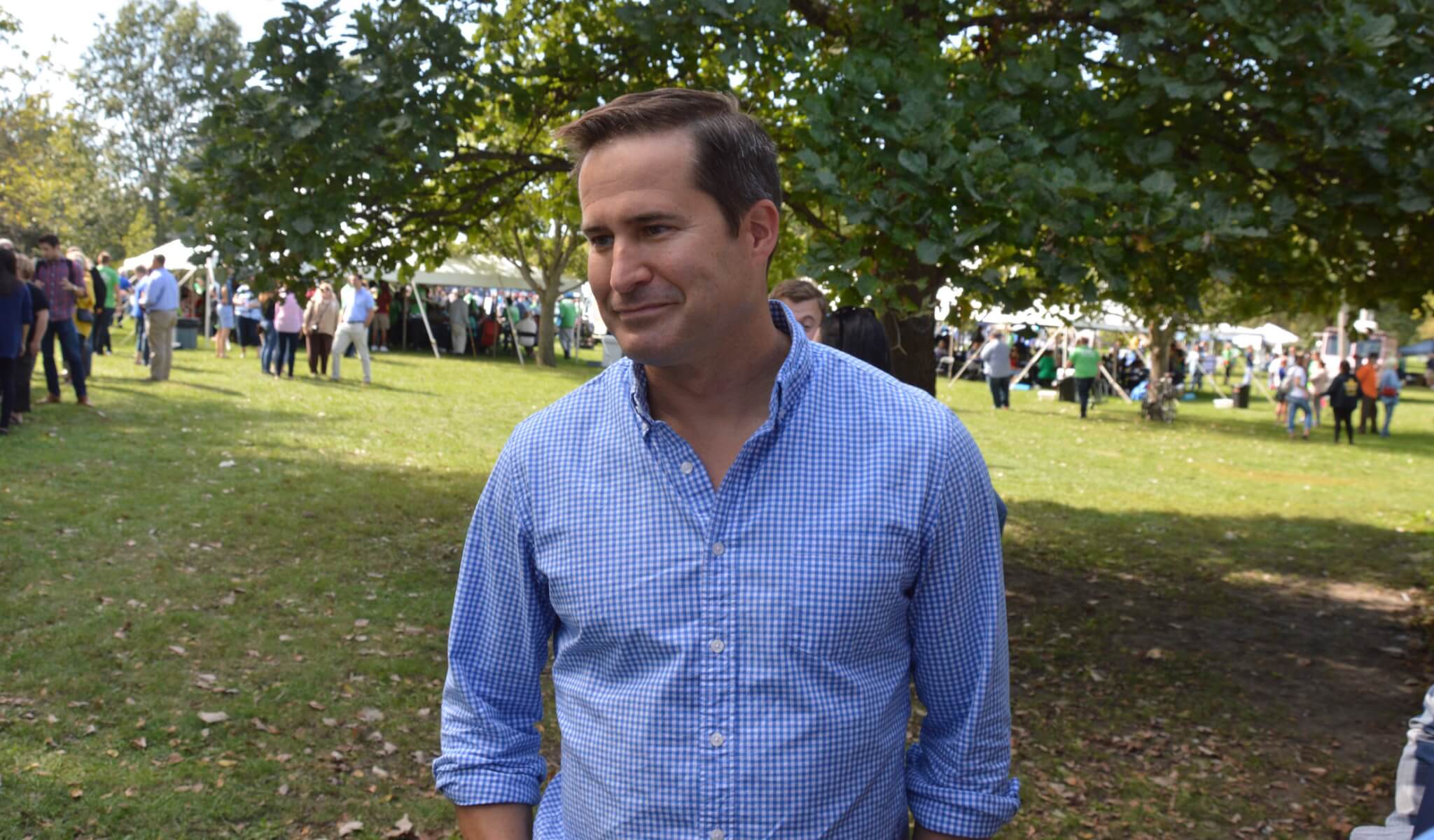 Cheri Bustos and Tim Ryan also spoke with reporters prior to their speeches. 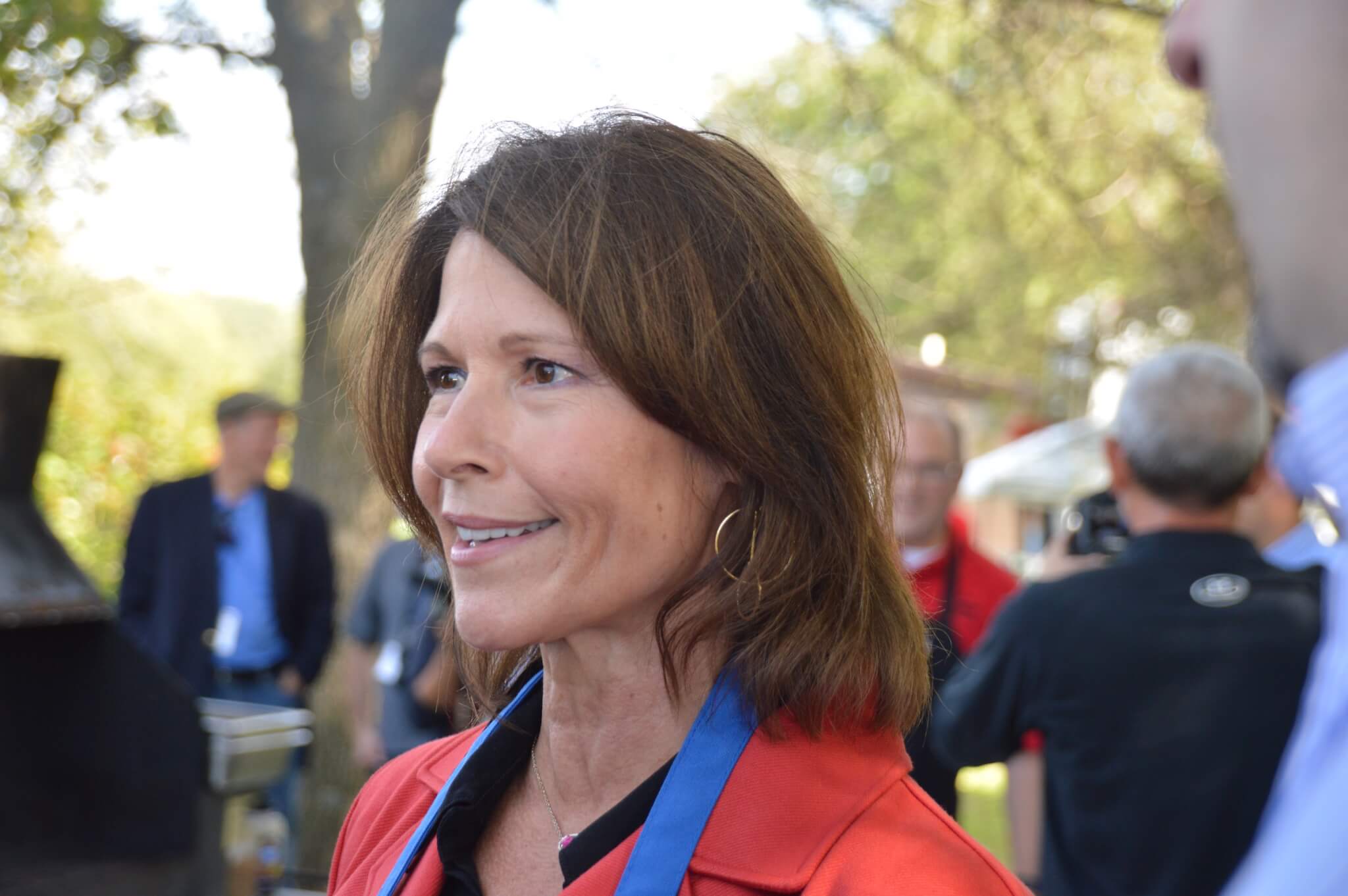 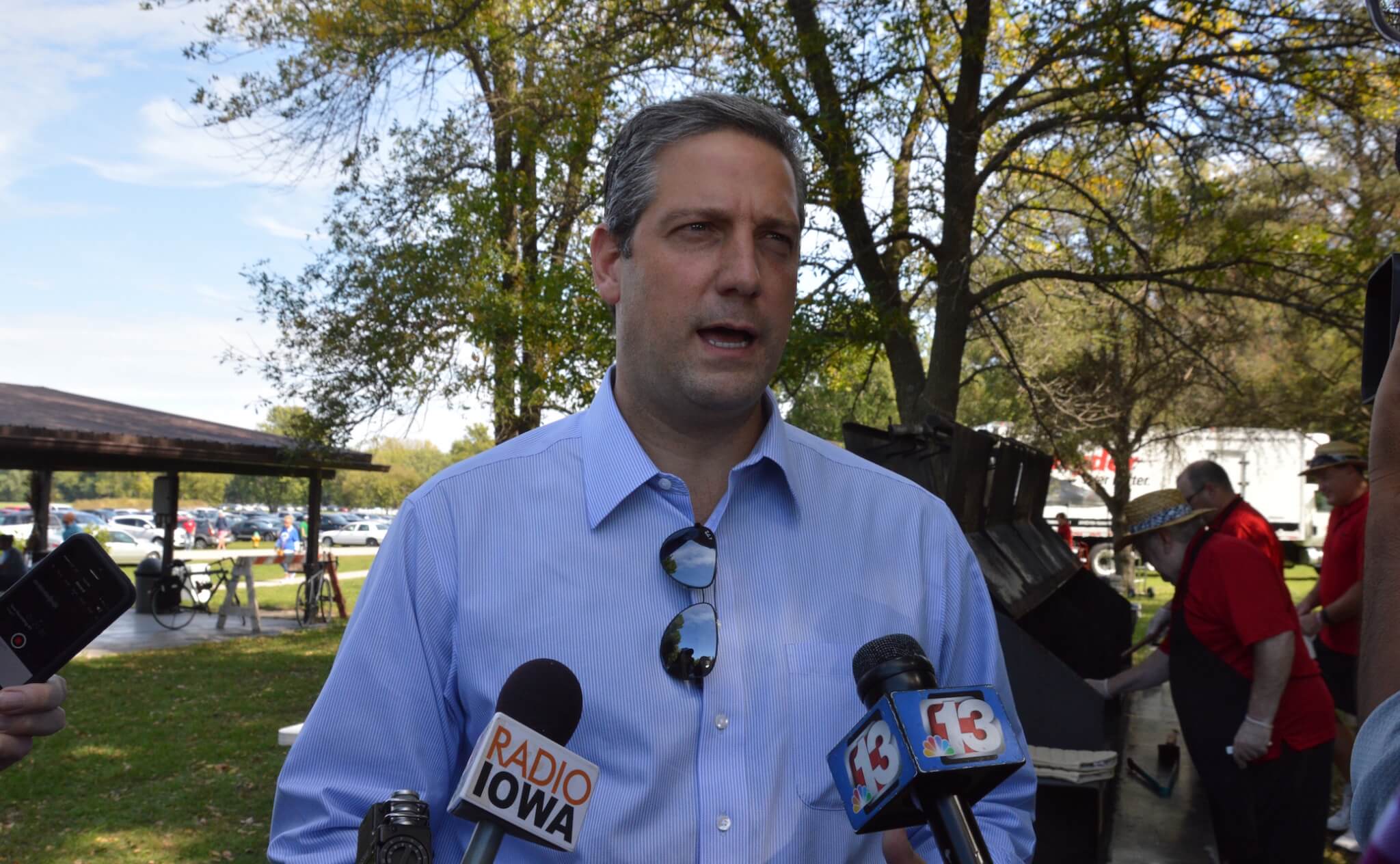 Democrats hoping to join Moulton, Bustos and Ryan in Congress worked the activist crowd ahead of the speeches. Theresa Greenfield made some new friends as she spoke with local Democrats. 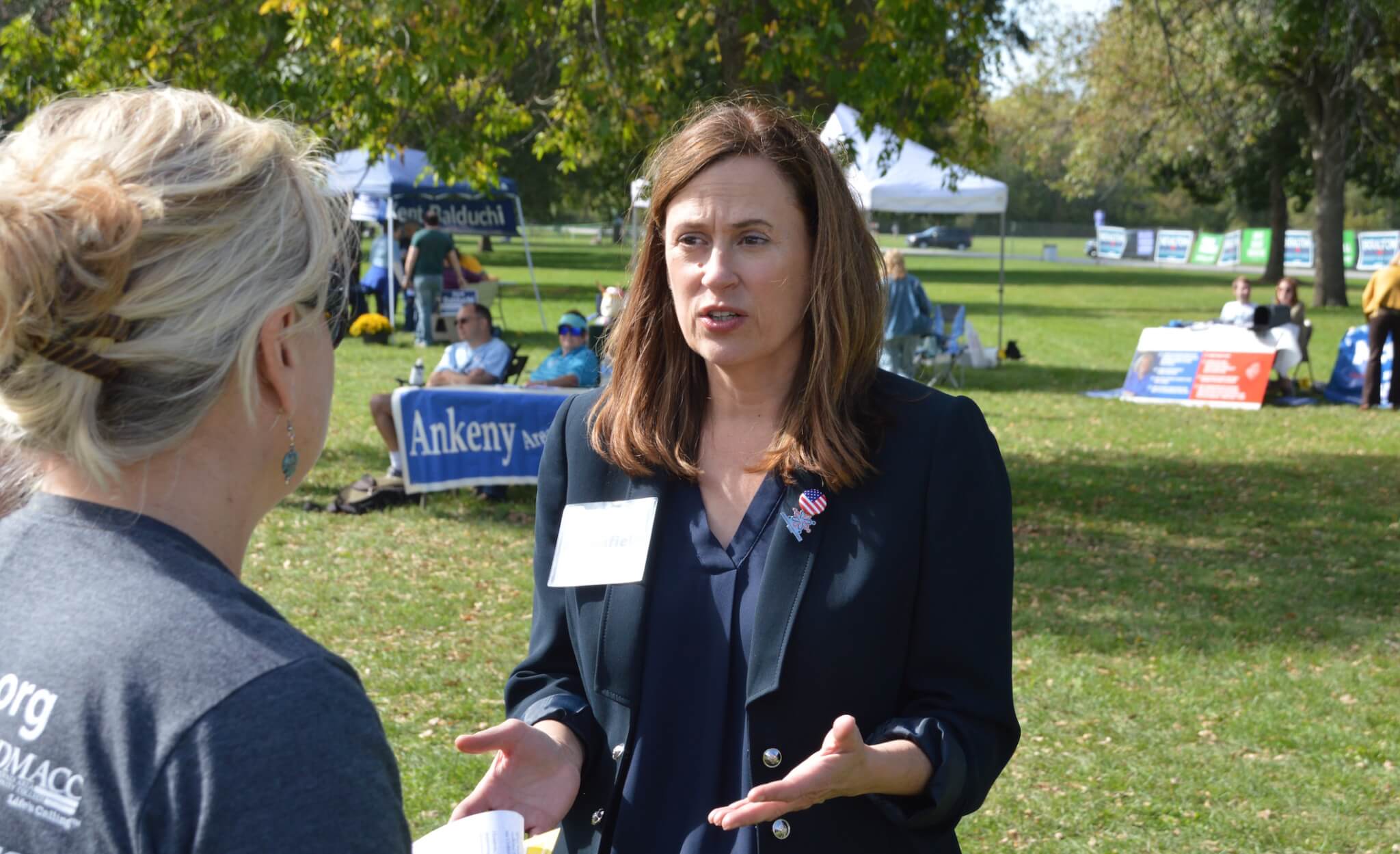 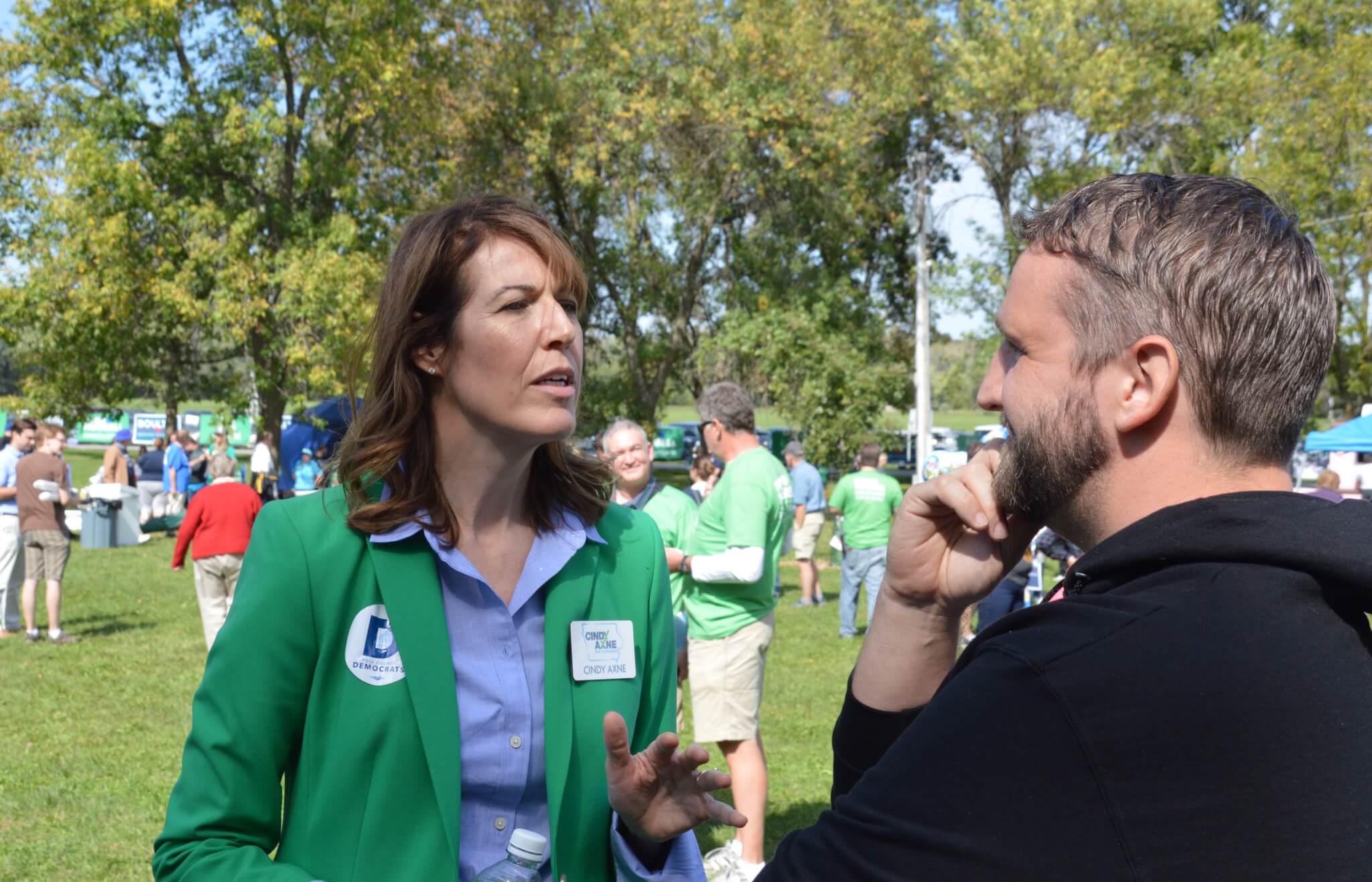 South Sider and former coach Eddie Mauro pitched his campaign, talking to the crowd about his experiences growing up in a Catholic family. He started off his speech with a quote from Pope Francis. (Plenty of other candidates worked the crowd as well, I just didn’t get as good of photos of them.) 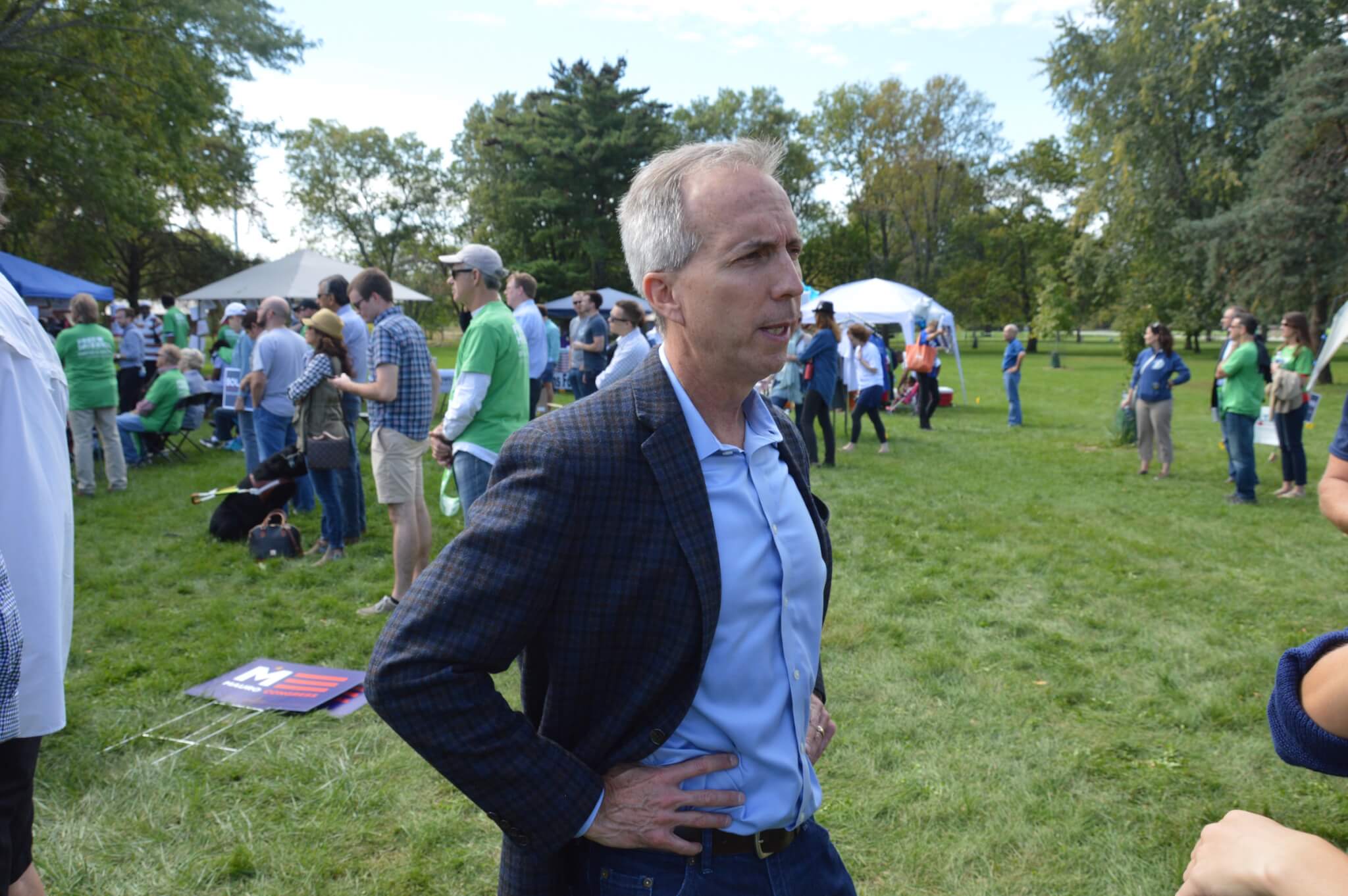 While candidates spoke on stage, climate change activists waved “Talk Climate” flags in the audience. Many contenders for the 3rd District and governor did mention climate change concerns in their speeches. 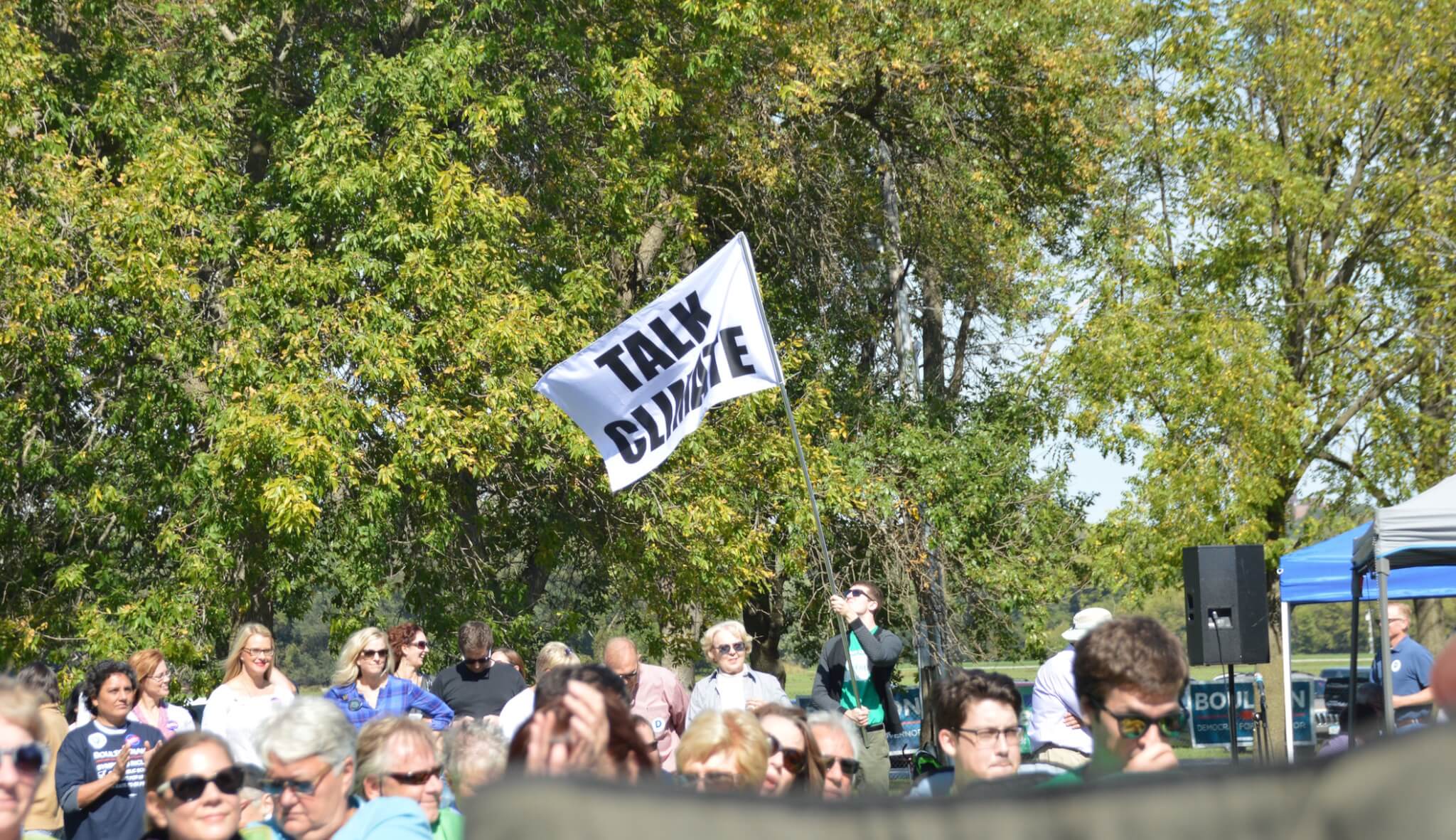 It was a long day on the Water Works fairgrounds, and a lot of people left before the keynote speeches. Those who stayed heard some of the more interesting pitches from national Democratic rising stars about the direction of the party. Here’s Cheri Bustos talking about her Iowa roots and how she won in a rural, working class Illinois district. 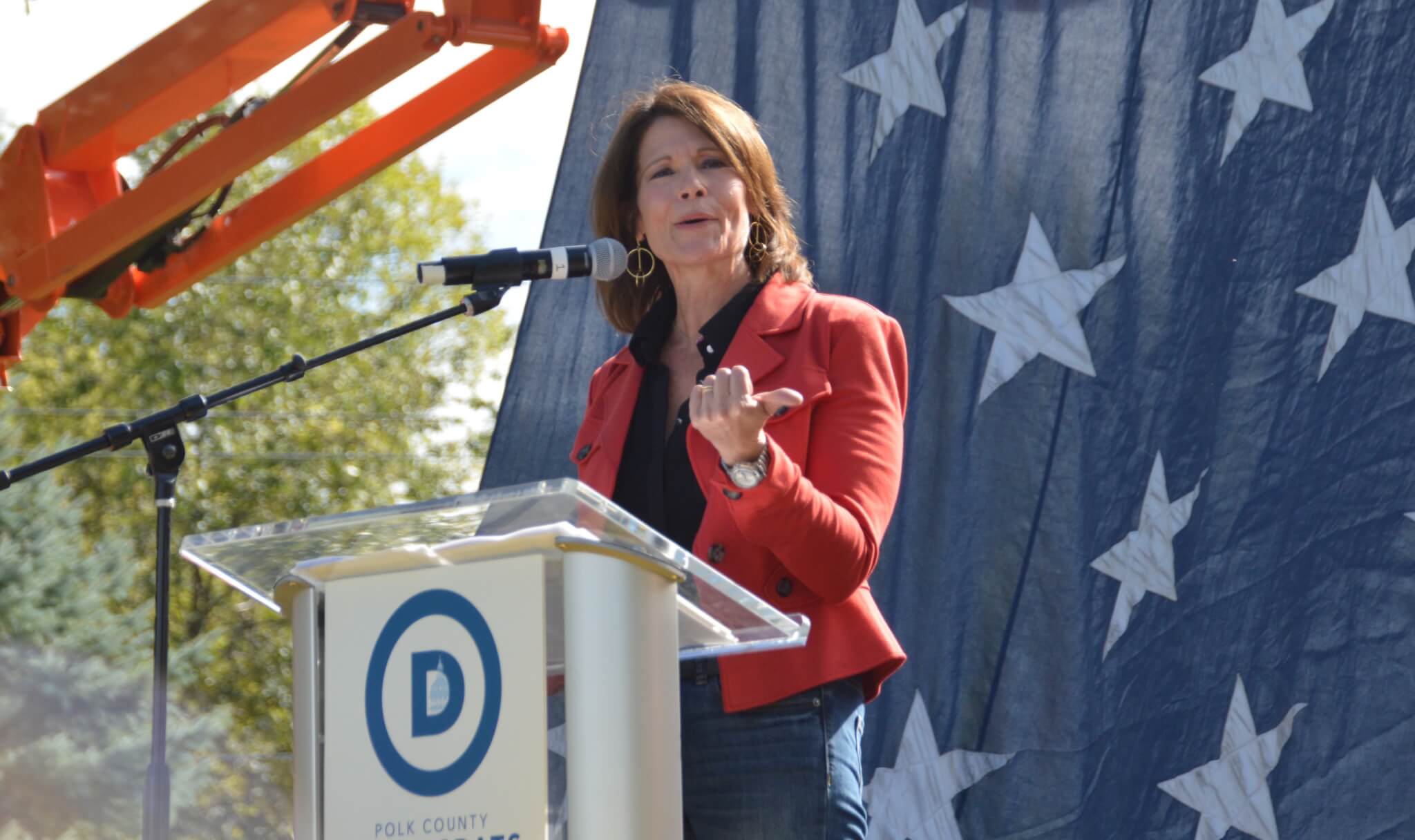 And Ohio’s Tim Ryan pressed the Democratic crowd on failed messaging of the party in recent years, challenging the accepted status quo. 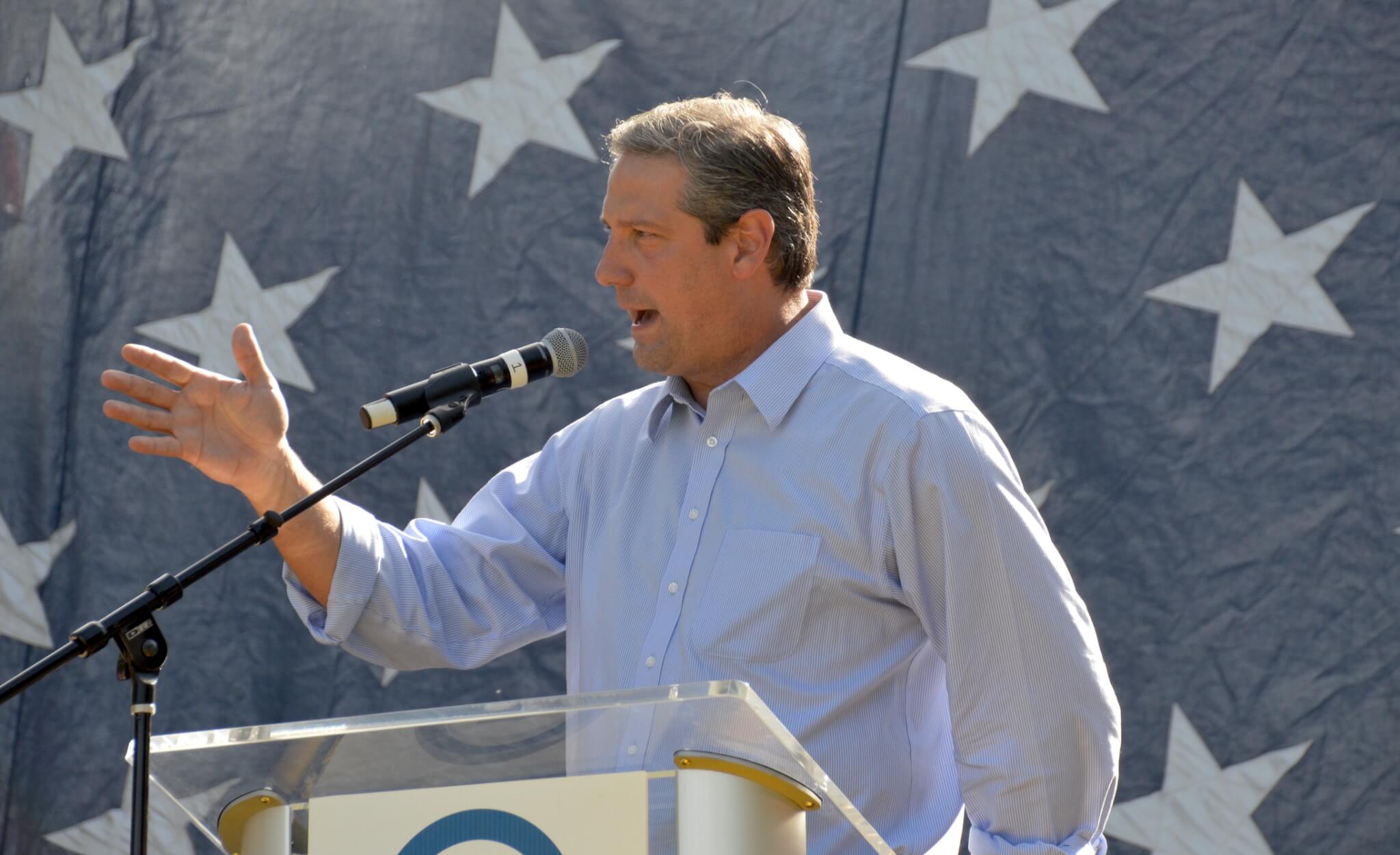 Amazingly, the bloated speaking list actually finished ahead of schedule. Overall, the event was a solid continuation of the Harkin legacy, and gave local Democratic activists a great sampling of new ideas from the party’s national rising stars.

4 Comments on "Scenes From The Polk County Democrats Steak Fry"