Lucas County Auditor Julie Masters had a simple message when asked if she had any advice for Iowa’s election officials as they brace for recounts in Iowa’s 2nd Congressional District: “Pray, keep the faith.”

Last Thursday, Masters oversaw a machine recount of the 4,648 ballots cast during the 2020 general election cycle in the Southern Iowa county. The administrative recount was requested Tuesday by Secretary of State Paul Pate due to a precinct-level reporting error discovered this week when the auditor’s office was preparing to canvass, and because of the incredibly close race for Congress between Democrat Rita Hart and Republican Mariannette Miller-Meeks.

On Thursday morning, before election workers in Lucas County fired up the vote-counting machines, Hart’s campaign announced it will file for a “complete recount” of precincts in the district’s 24 counties, which entailed delivering written filings to each of the counties by 5 p.m. Friday.

As of Friday afternoon, of the 394,383 votes cast in the 2nd District race, Miller-Meeks led Hart by 47 votes.

The recount in Lucas County, and the recount held last week in Jasper County, provide a preview of what voters can expect to see as recounts play out in the coming weeks across Southeast Iowa.

“With so much at stake in this election and such a slim margin separating the candidates, Iowans deserve to know categorically that their ballots have been accurately counted,” said Zach Meunier, Hart’s campaign manager, in a statement. “Over the last several days, multiple consequential errors have materialized in this race that have serious implications for the district’s future representation. Given the errors found in Jasper and Lucas counties at the eleventh hour, we are moving forward today with requests for a complete recount of each precinct in the Second Congressional District to make sure all results have been reported accurately. Anything less will perpetuate doubt around this election.”

Miller-Meeks has claimed victory in the race multiple times despite the fluctuating vote totals and lack of a clear outcome. The Associated Press has not declared a winner. Radio Iowa’s O. Kay Henderson reported that both candidates were in Washington, D.C., last week for new member orientation sessions.

#ia02 candidates @millermeeks and @RitaHartIA are BOTH in Washington, DC for orientation sessions for new members. Current vote count? Miller-Meeks leads by 47 votes out of approximately 400,000 cast. Hart has asked for a district-wide recount. #iapolitics

In Jasper and Lucas counties, recounting all of the ballots did not yield new results. 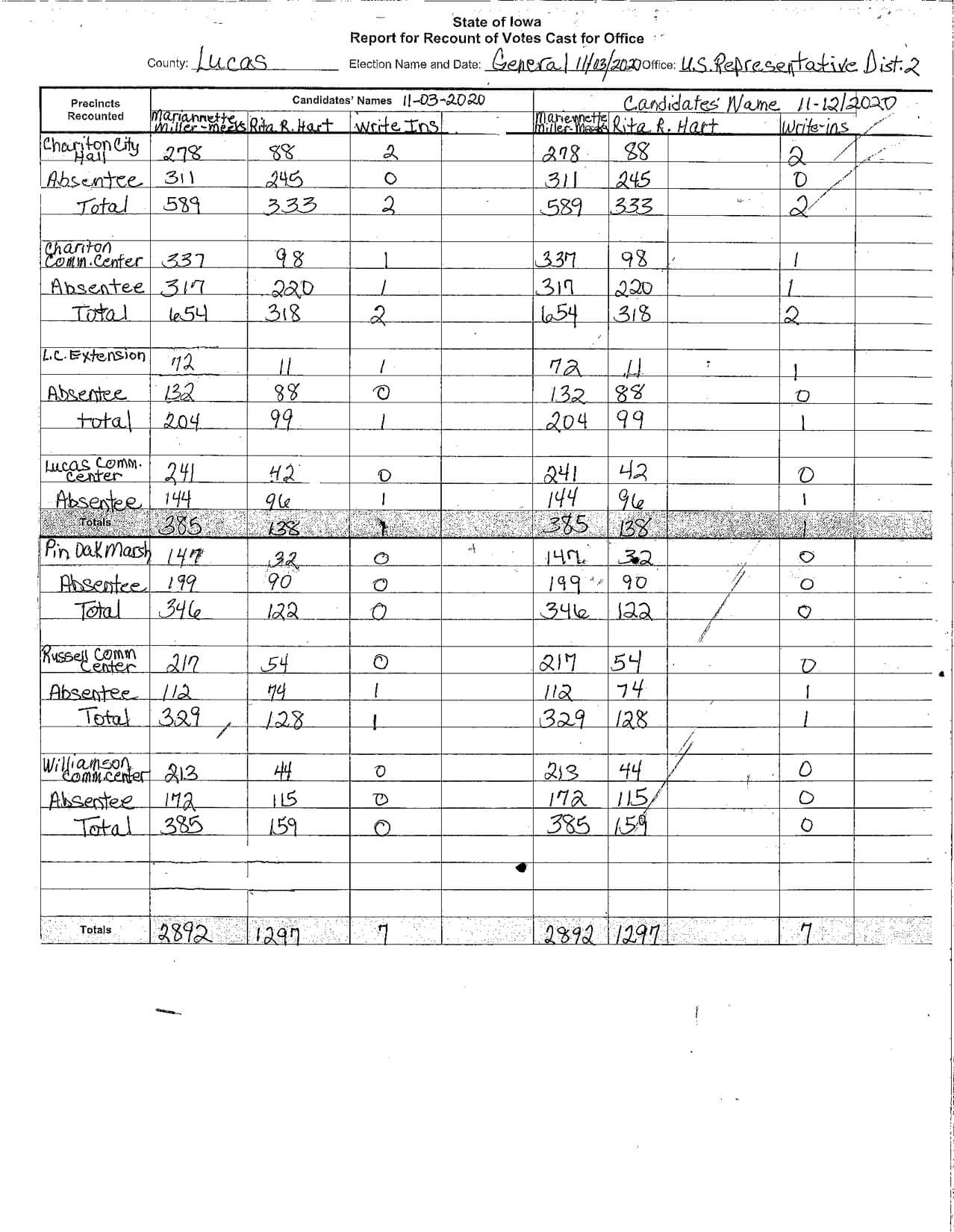 On the second floor of the Lucas County courthouse, at 9 a.m. Thursday about a dozen election workers began feeding ballots into seven ballot-counting machines set up in the hallway. Two workers were stationed at each machine as they took turns inserting the ballots. Two machines were designated for absentee ballots and the rest dealt with ballots cast on Election Day Nov. 3. The machines kept track of the number of ballots it received as workers slid them into a thin opening large enough for one piece of paper at a time.

Throughout the process, which wrapped up around 3 p.m., auditor’s office staff, a staff member from the secretary of state’s office, reporters, lawyers and political party staff observed the goings-on.

While no significant issues occurred, a paper jam in the morning briefly halted counting at one machine, and there were multiple instances of under votes (no vote cast in a race) and over votes (too many votes cast in a race), which are not uncommon. At least once a machine did not register a ballot because of a tear or stray mark, prompting election workers to transpose votes on the “spoiled” ballot to a fresh ballot and insert it again so the votes were properly counted.

At the end of the day, Masters said she was “so secure in our results” because of the “checks and balances” built into the election infrastructure.

In addition to the recount, Secretary of State Pate ordered a hand count “audit” of votes cast in Lucas County’s Russell precinct because that is where the vote tabulating error occurred. An audit cannot change the results of an election. Rather, an audit is a way to “double check” that votes were correctly counted on election night, explained Heidi Burhans, director of elections at the secretary of state’s office. Post-election audits are standard procedure in Iowa. After every election, the secretary of state randomly selects a precinct in each county that is subject to a hand count audit. Lucas County completed two audits this week because it was required to complete the standard post-election audit and an audit of the Russell precinct due to the error that occurred there.

When a political campaign requests a recount, the process is different than an administrative recount requested by Pate, which is what recently occurred in Jasper and Lucas counties. After Pate requested the recount, the board of supervisors in each county had the authority to approve or reject the requests. It was up to the counties whether to recount the ballots by machine or by hand. In both counties, the recounts were conducted by machine.

When campaigns request a recount, the county does not have a say in whether the recount goes forward, it must carry out the campaign’s request. A three-member recount board — in this case comprised of a Democrat selected by the Hart campaign, a Republican selected by the Miller-Meeks campaign, and a third individual jointly chosen — then determines whether the recount will be conducted by hand or machine.

“When all members of the recount board have been selected, the board shall undertake and complete the required recount as expeditiously as reasonably possible,” Iowa law states.

The board must complete the recount and file its report no later than 18 days post-canvass (Nov. 27 or 28). If the recount yields results in a race that are different from the canvass, the board of supervisors must convene within three days to correct the results.