Before Election Day gets here, Iowans may well have already cast one million early votes.

As of this morning, the Secretary of State’s office reports that 924,533 votes have been cast in the 2020 election. The state has also now surpassed one million absentee requests, now sitting at 1,012,922 (if you still have an absentee ballot at home, you should hand deliver it to your county auditor’s office at this point or just show up at the polls).

It’s hard to predict with any sort of certainty what this will mean for the final turnout on Election Day. Overall turnout is likely to be up over 2016, when registered Republicans cast about 70,000 more votes than registered Democrats.

Iowa looks to have great weather on Nov. 3, which could help turnout then. But the massive surge in Iowa’s coronavirus cases and hospitalizations could also make at least some voters think twice about going to the polls if they haven’t already voted.

Let’s take one last look at partisan breakdowns in the early votes, all with the acknowledgement that we simply don’t know what Election Day turnout will bring in such an unprecedented year.

As always, you can take a look at our spreadsheet for more numbers or to play around with it yourself.

While this sounds quite good for Democrats, keep in mind — they need to have a far higher overall turnout than they got in 2016 when they lost the state by nine points to Donald Trump. Simply getting back to the 506,000 registered Democratic votes from four years ago won’t be enough. They’re on a good path to accomplish that, but don’t look at those numbers and think that Democrats only have 15% more to go.

Still, you’d certainly prefer to be where Democrats are right now, with far more votes banked than Republicans.

We’re not going to go as in-depth in this piece as we did with our early vote story from the day ballots went out. Instead, we’ll focus in on the current early vote as a percentage of total 2016 turnout. 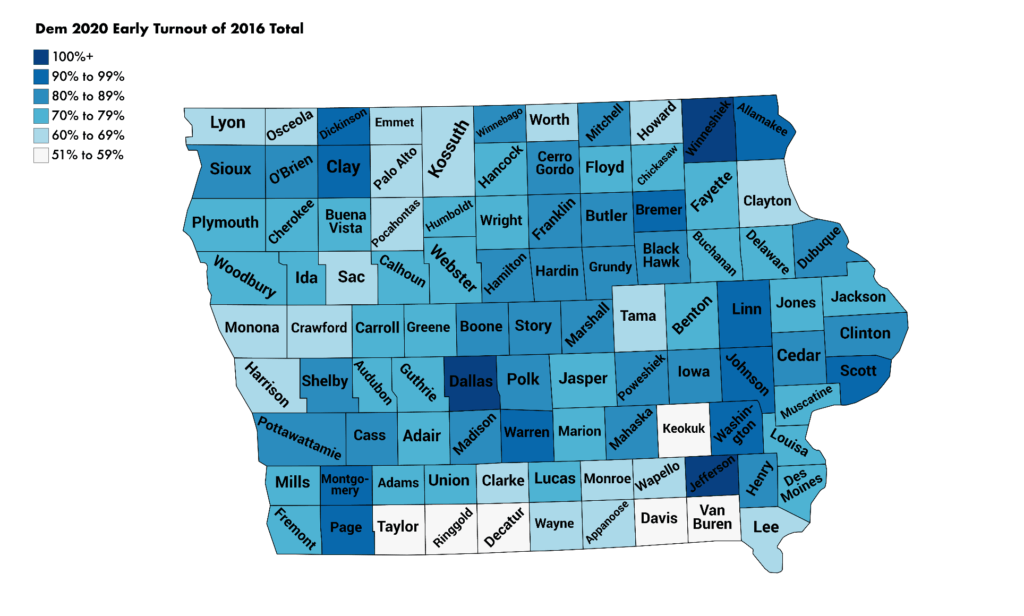 And here’s Democrats’ top 20 counties for current votes as a percentage of their total 2016 turnout:

The best news for Democrats is that four of the largest counties — Scott, Linn, Johnson and Dallas — are all above 90%. Though Polk County isn’t in the top ten, they’re still at 84% of their 2016 turnout, no easy feat to accomplish with such a high population and so many ballots to go chase.

There aren’t too many other trends. Southern Iowa is struggling as it often is, though part of that is due to consistently declining population.

A few caveats are important: Dallas County is the state’s fastest-growing, but the numbers are inflated a bit over 2016 because the local auditor failed to count several thousand votes that year. That accounts for a bit of why Dallas is at 122%, but most of the reason is due to population growth and enthusiasm.

Both Jefferson and Winneshiek often vote early in large numbers, so it didn’t require too much a bump this year to match their total votes early on.

Some of the other counties that are so-so on the percent of 2016 total vote still have vastly increased their early vote numbers. That’s still important, as some counties just traditionally have more people go to the polls than others.

We won’t break that out into a full map, but here’s the top 20 counties where Democrats have increased their 2020 early vote over their 2016 early vote the most: 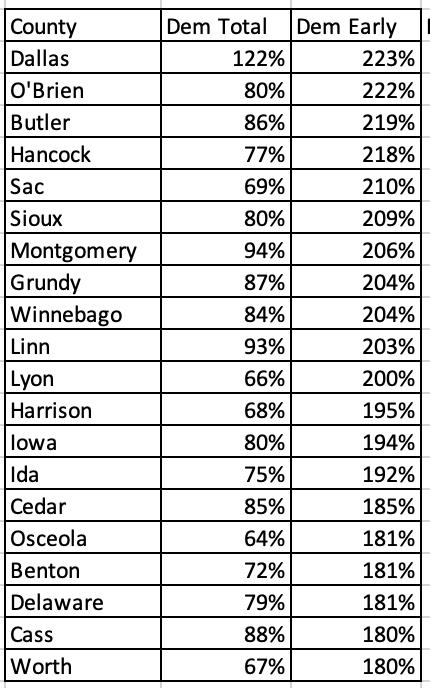 Democrats have literally doubled their early vote turnout in eleven counties, an incredible accomplishment. If you look back at the above map, you’ll notice that some with lower percentages of their 2016 total vote have still made huge improvements in their early vote numbers. Perhaps the rest will come out on Election Day.

Despite their president discouraging voting by mail, Iowa Republicans are still seeing important jumps in their own early vote numbers over four years ago. Though no counties approach the 100% that Democrats have achieved in some, Republicans should still be pretty happy about where they’re at in 25 counties where they’re at 60% of their 2016 total turnout. Again, they just need to get back to their 2016 numbers (though they’d certainly like even more), and Republicans often dominate Election Day voting itself. 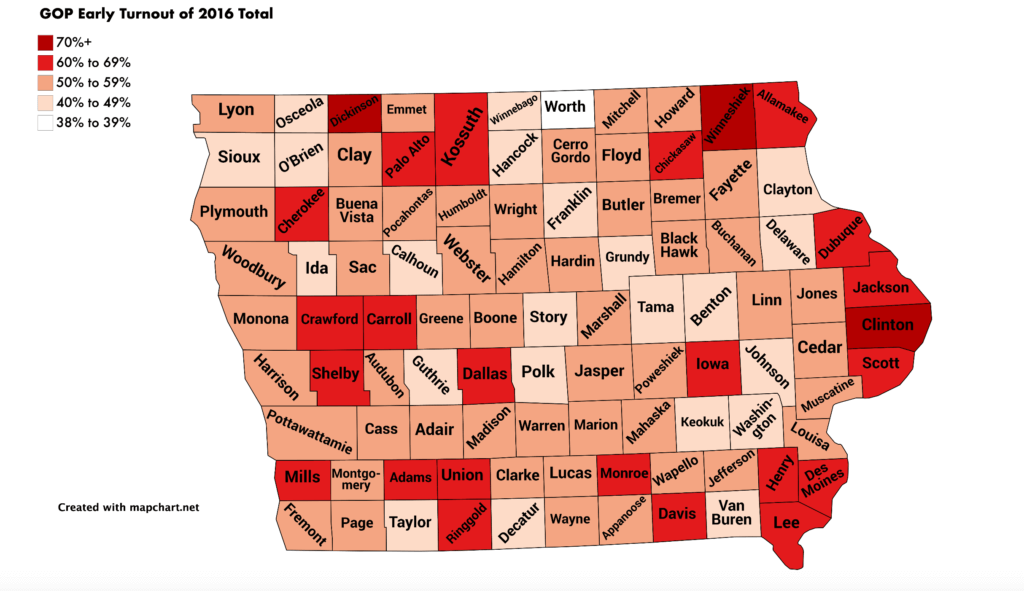 And here’s Republicans’ top 20 counties for current votes as a percentage of their total 2016 turnout:

Many of Republicans’ best counties are all along the Mississippi River, which should be concerning to Democrats given that Trump’s flipping of Eastern Iowa’s blue-collar counties was perhaps the biggest factor in his success. They’re doing particularly well in the southeast corner where some key Iowa Senate races are at.

What should be keeping Republicans up at night is their terrible numbers in Polk County. It’s their 3rd worst in the state for percentage of 2016 turnout — they’re only at 40%. They’re also only to 119% of their 2016 early vote, when the Republican statewide average is 136%. While Republicans obviously aren’t going to win Polk, they still have a lot of voters there — 12% of Iowa’s total registered Republicans live in Polk. Allowing Democrats to run up an even larger margin in Polk County due to their own poor turnout would be disastrous.

Outside of that, there aren’t too many big trends that pop out on this map. Just like Democrats, they also have some counties that, despite having a low percentage of their 2016 vote turned out now, they’re still miles ahead of where they were with the early vote four years ago. 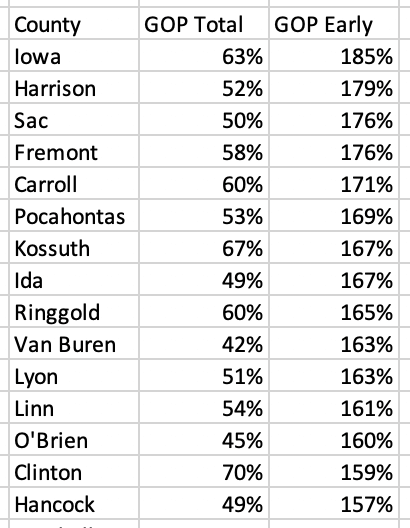 Like Democrats’ list, a lot of these are more rural counties that didn’t have much early vote participation in years’ past, making it easier to boost those numbers up — still useful, of course. But Republicans should be encouraged that a large county like Linn is on this list.

While both Democrats and Republicans have surpassed their 2016 early vote totals in every single county, there are 26 counties where the number of No Party ballots cast still have not reached their 2016 numbers. That seems… odd.

We’ve living in a pandemic, and the Secretary of State sent out an absentee request to all voters this year. One would think that every group would outperform its 2016 early vote totals by now.

Individual campaigns have modeling scores for who No Party voters might support, so they might have a better idea on which party this could help or hurt.

First, after some competitive primaries in past years, the number of No Party voters have dropped as Iowans have re-registered with a party — there’s about 50,000 fewer No Party registered voters now than this point in 2016. So it could simply be there’s not as many potential No Party ballots to be cast in the first place.

Alternatively, perhaps some of the independent Donald Trump voters from 2016 aren’t as enthused to show up this year. Or maybe it’s younger voters that lean left that aren’t any more excited to vote for Joe Biden in 2020 as they were Hillary Clinton. The Democrats’ ground game often does a good job of identifying which No Party voters are with them and signing them up for absentee ballots — with no door-knocking this year, that may be causing problems.

Regardless, it’s something interesting to keep an eye on, though we won’t have a real idea of what’s happening with it until the results come in on election night.

Again, you can see our spreadsheet here.

And keep in mind — early votes by registered party only tells us so much. We obviously don’t know who these voters have cast their ballot for, just that they’ve cast one. It could be that only 80% of registered Republican voters who vote back Trump (probably not, just an example), while 90% of registered Democrats support Biden.

If there’s one fortunate thing to look forward to, it’s that Iowa usually does a pretty good job of counting the votes in a timely manner on election night.