The Clive-based Iowa Values Action registered as a super PAC with the Federal Election Commission on July 15 under the exact same address as Iowa Values. Since then, according to its October FEC filings, the group spent more than $1.4 million on the U.S. Senate race, with $1,382,738 coming in the form of independent expenditures used for digital ads, mailers and radio spots opposing Greenfield.

Of the $1.6 million the super PAC raised, $1 million came from Iowa Values. Some of the rest of the money came from large donors in California, Florida and Texas — Ernst has often criticized the funding from outside Iowa that is benefiting her opponent.

Iowa Values is a 501 (c)(4) tax-exempt organization, also referred to as an “issue advocacy” group or political nonprofit. Nonprofits like Iowa Values may engage in political activities so long as politics is not their “primary” purpose.

“The IRS has never defined what ‘primary’ means,” Open Secrets wrote in a dark money explainer, “or how a percentage should be calculated, so the current de facto rule is 49.9 percent of overall expenditures, a limit that some groups have found easy to circumvent.”

The term “dark money” emerged in the Citizens United era as a way to identify “spending meant to influence political outcomes where the source of the money is not disclosed.”

A super PAC, like Iowa Values Action, is created with the explicit purpose of influencing a federal election and is required to register with the FEC, according to the nonpartisan Campaign Legal Center. Like a dark money group, super PACs also can raise unlimited funds, but they must disclose their donors and expenditures. Unlike the 501 (c)(4)s, they can spend all their money on campaign advocacy.

Super PACs and dark money groups are prohibited from coordinating with political campaigns or donating directly to candidates.

“If the dark money group were to put up their own ads on TV right now, they would be required to disclose their donors because it’s less than 60 days before an election. Instead, by funding the super PAC with money from the dark money group, Ernst’s big money donors are effectively able to spend unlimited money in the race while hiding their identities from the public,” said End Citizens United president Tiffany Muller in a statement. “Iowans have a right to know who’s flooding their airwaves with ads, but Ernst and her big donors have devised a scheme to keep them in the dark. If they’re jumping through all these hoops to run ads, there’s obviously something they don’t want the public to know about.”

Iowa Values was first outed for potential illegal activity in December 2019 by the Associated Press. The AP found “Ernst and her campaign worked in close concert with Iowa Values.” In one instance, the AP reported, Ernst appeared to introduce a donor to Iowa Values fundraiser Claire Holloway Avella, who then reached out to the donor, referencing that introduction, to request $50,000 to help messaging efforts in support of Ernst.

Political activism, which cannot be the primary purpose of a nonprofit like Iowa Values, appear central to the group’s work.

“The documents reviewed by the AP, including emails and a strategy memo, not only make clear that the group’s aim is securing an Ernst win in 2020, but they also show Ernst and her campaign worked in close concert with Iowa Values,” the Associated Press wrote.

Tax returns filed by Iowa Values in 2017 and 2018 show it spent $563,694 in a two-year period, compared to the $1 million it sent Iowa Values Action this year between July and mid-October.

Since the AP story broke, multiple watchdog groups have filed complaints with the FEC to try and get the federal agency to investigate ties between Ernst’s campaign and Iowa Values.

Avella, a political operative for Ernst who handles fundraising, also has worked for Iowa Values, contributing to the allegations of illegal coordination between the two sides.

Iowa Values Action paid Holloway Consulting $59,524 between Aug. 26 and Oct. 13 for fundraising consulting, according to the super PAC’s October FEC filings. Holloway Consulting, of which Avella is the founder and president, was the only political operative paid by the PAC during that time period.

Ernst’s campaign still worked with Avella this year, when two “Ernst Victory” fundraisers were scheduled with Holloway Consulting listed as the point of contact.

On Oct. 13, Iowa Values posted to its YouTube page an ad paid for by Iowa Values Action. Meant to sound like a public service announcement, the narrator says “Theresa Greenfield and the left, they’ll tear this country apart.” The ad calls on voters to “vote Joni Ernst to stop the liberal takeover.” Super PACs, unlike political nonprofits, can call for a specific election outcome, such as encouraging Americans to vote for a particular candidate over another.

On Facebook, Iowa Values Action spent $102,119 between July 29 and Oct. 27 on ads accusing Greenfield of siding with “Nancy Pelosi and the radical left.” 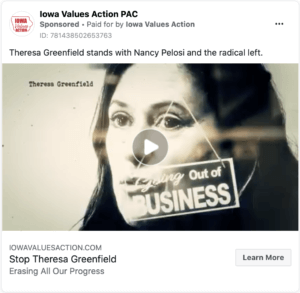 The Iowa Values Action website describes itself as a “Super PAC that supports candidates committed to conservative values and free-market principles. The Iowa Values website says it is a “nonprofit, nonpartisan forum grounded by free-market principles. It champions conservative values and is rooted in the belief that Iowa’s greatest asset is its people.”