With just 17 days until election day, six-figure ad buys have begun popping up across Iowa’s major media markets for Iowa House races — in total, Starting Line found $2.2 million worth of buys on network TV for state legislative races for the House in the first three weeks of October.

While both parties will tout certain races they’re most excited about flipping, the real strategies come out in the TV spending. Democrats are trying to flip the chamber, which currently stands at 53 Republicans and 47 Democrats. They need a net of four wins.

Iowa Starting Line conducted an in-depth analysis of the FCC’s public inspection file to find ad buys in the Des Moines, Cedar Rapids, Quad Cities, Ottumwa, Mason City, Omaha and Sioux City media markets. We covered ad buys contracted from Sept. 28 through the end of this week on the three major networks, or most of the October placements that have run.

Democrats, who appear to have the financial advantage in the House, did start TV ads in some districts one or two weeks earlier in September — we’re covering just October due to the sheer amount of data there is to collect. It should also be noted that KWWL’s file is incredibly disorganized — we did our best at calculating the Cedar Rapids numbers from it. The parties will soon report the total in-kind spending for these campaigns, but our analysis should give you an early sense of where the biggest battlegrounds lie.

From this analysis, the most expensive Iowa House race proves to be Bettendorf’s HD 94 between GOP Rep. Gary Mohr and Democratic challenger Marie Gleason. Next up is Ankeny’s HD 37, where Democrat Andrea Phillips is taking on Republican Rep. John Landon. Third is a Democratic defend district, where Rep. Scott Ourth of Warren County is fending off a challenge from Republican Brooke Boden.

In all, Democrats spent about $1.3 million to Republicans’ $950,000 on network TV in the first three weeks of October. That, of course, does not account for mailing programs or digital buys — it appears Democrats are far outpacing Republicans on their digital program.

In all, Democrats have TV buys in ten districts where they’re on offense, and nine where they’re playing defense. Republicans are contesting five Democratic-held seats on the airwaves, while defending nine of their own. (These don’t all overlap — for instance, only Democrats are spending in the suburban Cedar Rapids HD 67 race where Eric Gjerde is expected to win Ashley Hinson’s current district).

Again, these are the numbers for October that we were able to access as of this week: 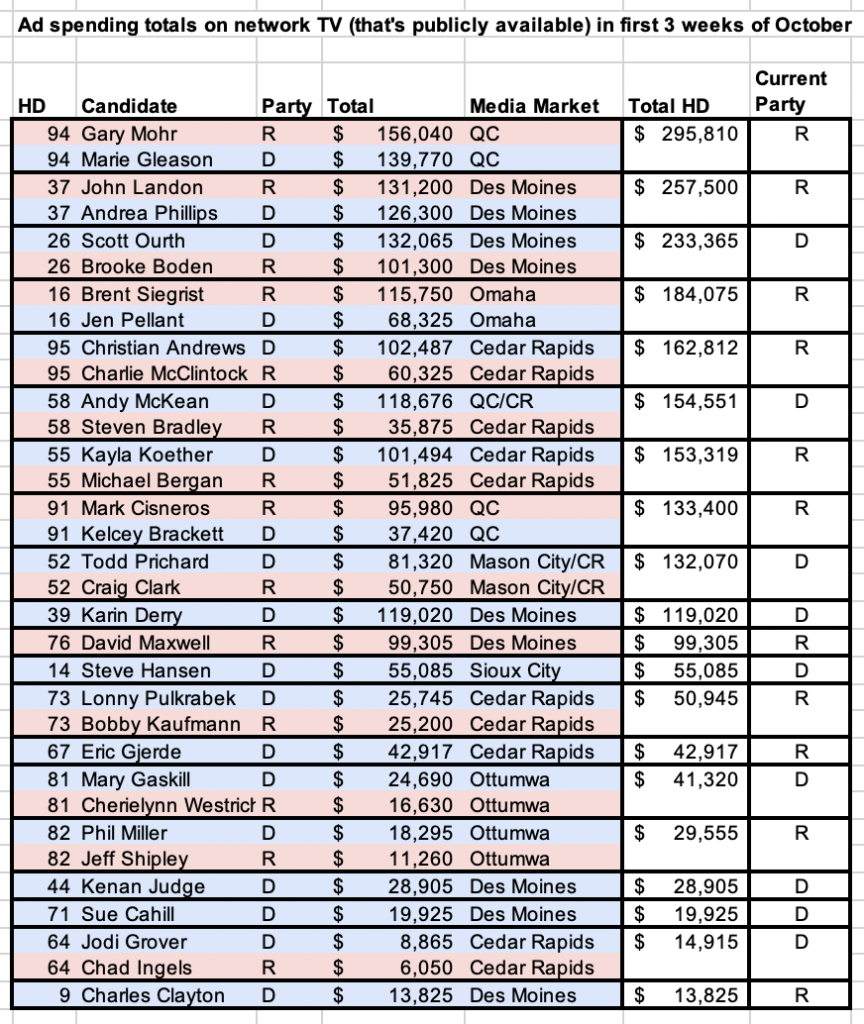 However, Democrats have expanded the battleground map this year, thanks in part to the districts they flipped in 2018 turning into mostly safe seats for their incumbents. They also have significantly more funding this time around.

Judging from their TV buys, Democrats have seen nine seats they could realistically flip, with a tenth coming on the board this week.

Those living outside the Quad Cities may be surprised to see the Mohr seat as the top-spending race in the state. But Bettendorf is a largely suburban city that has lagged other Iowa suburbs in its drift toward Democrats. Now that process appears to be speeding up, and Democrats have a strong candidate in former John Deere worker Marie Gleason, who came close in an underfunded 2018 Senate matchup against Roby Smith. Democrats are all-in with Gleason this year, part of their hopes of ensuring there are no suburban Republicans left standing in the Iowa House after 2020.

The Andrea Phillips HD 37 race is a high-profile rematch from 2016. Though Phillips came far short in that attempt, she has the full backing of the party this year as Democrats try to flip the other half of Ankeny. Republicans, however, are putting significant resources into saving John Landon, and this race will likely come down to the wire, even as Democrats continue to improve their standing in the suburbs.

One area Republicans have appeared to give up on is the Cedar Rapids suburbs. After a hard-fought race in 2018, where Eric Gjerde came an impressive four points shy of ousting the popular Ashley Hinson, Gjerde is now largely expected to win this open seat easily. But Democrats are still spending here to make sure, putting about $42,000 in for the first three weeks of October on the air.

Also in Linn County is one of Democrats’ other best chances for a pick-up that hasn’t received as much attention. Democratic public works employee Christian Andrews is vying for a district that includes portions of northern and eastern Linn County, encompassing Center Point and Mount Vernon and parts of southeastern Buchanan County against Republican Charlie McClintock. It’s an open seat, and one that Andrews ran a strong campaign for last time. Andrews has outspent McClintock on TV the past three weeks by $102,000 to $60,000.

The Decorah HD 55 seat is up for a competitive rematch race — first elected in 2016, Bergan won the Winnishek County seat against Koether in 2018 by nine votes in a race that drew state attention after it surfaced that absentee ballots without postmarks but verified by the postal service went uncounted in the district.

The swing district may also remember Bergan’s recent activity with an Iowa government insurance program, when it was reported by the Associated Press that he and other board members routinely took trips to out-of-state resorts off the coast of Florida and Lake Michigan with taxpayer money.

Current public records show Koether outspending Bergan on TV two-to-one, though some of the Cedar Rapids market files were tough to discern.

A sneaky pickup for Democrats may yet come in Council Bluffs’ HD 16, where Democrat Jen Pellant is running a strong race against a former Republican speaker of the Iowa House, Brent Siegrist. Republicans are investing a lot of money into propping up Siegrist for the seat that Mary Ann Hanusa is leaving. Democrats nearly pulled off an upset here in 2018.

District 91 is seeing a competitive race for the Muscatine seat, with Republican candidate Mark Cisneros facing Muscatine City Councilmember Kelcey Brackett, a Democrat, for Republican Rep. Gary Carlson’s seat after he retires this year. Cisneros has spent well over Brackett in the first weeks of October—securing $95,980 worth of ad buys compared to Brackett’s $37,420.

A contentious contest is developing in Bobby Kaufmann’s district, where Johnson County Sheriff Lonny Pulkrabek is giving the son of the Republican Party chair a run for his money. The Cedar County and rural Johnson County district has seen mostly even spending on TV, but this was another district where the ad buys were difficult to parse — we’ll get the full picture in a few days from the finance reports.

The Ottumwa media market is rather inexpensive, but there’s still a fierce race going on there in the rematch between Jeff Shipley, a Republican, and Phil Miller, a Democrat, for District 82’s seat. Miller was first elected to represent the district in a hard-fought August 2017 special election. In a surprise upset, Shipley won the Fairfield seat in 2018. Now, Miller has been outspending Shipley in ad buys for the first three weeks of October.

Finally, there was an intriguing new entrant to the TV airwaves this week. Fort Dodge’s Charles Clayton, a popular local community leader, is challenging first-term Republican Ann Meyer. This was one of Republicans’ two pickup seats in 2018. Though it’s been trending Republican under Trump, Democrats may have a strong-enough candidate to make this race very close.

Complicating Democrats’ efforts to retake the Iowa House this year is Republicans’ strong challenges of five Democratic-held seats in districts that Trump won handily. If the GOP is successful in flipping any of these seats, it’ll take that many more Democratic flips to capture the chamber.

The third-highest spending Iowa district is a bit of a surprise this year, with Republicans hoping to flip the Warren County seat held by Scott Ourth. Republican Brooke Boden, an Indianola small businesswoman, has just over $100,000 worth of TV ads for her race. Democrats have responded with a $132,000 investment in the same time.

Republicans also want to defeat their former legislator Andy McKean, who switched to the Democratic Party in April 2019 after returning to the Statehouse following a long past career there. Trump won the Jackson and Jones County-based district by 20 points in 2016, so Republicans are naturally spending to recapture it. McKean, however, is incredibly popular locally, and Democrats have significantly more TV time here based on the numbers we could find.

Another GOP target is the Democratic leader himself, Todd Prichard. The district, which includes Floyd and Chickasaw and eastern Cerro Gordo counties, is rural and has been trending red in recent years—after voting twice for Barack Obama, Donald Trump won the area with 57% in 2016. Republican Craig Clark, a Walmart field manager, has a very questionable personal background, but Republicans are propping him up here in the hopes Trump romps again in Northern Iowa and carries down-ballot Republican candidates with him.

Longtime District 81 Democratic incumbent Mary Gaskill spent $24,690 in the first three weeks of October, the most in the Ottumwa TV market. Her race against Cherielynn Westrich, who shelled out $16,630 for the seat covering Ottumwa and portions of rural Wapello County, is a rematch—Westrich only took around 45% of the vote in 2018 against Gaskill. That was still closer than expected, however, and Republicans spent barely anything there two years ago. Trump won by 17 points in this district in 2016.

What is likely Republicans’ best pick-up opportunity has also seen very little TV spending, though this may be another case where the public files for the Cedar Rapids market were lacking. Bruce Bearinger retired from the rural HD 64, which covers the Independence and Oelwein area. Trump won by 13 points here, and public records show Democrat Jodi Grover shelled out $3,895 compared to Republican Chad Ingel’s $6,050 on TV ad buys. That seems low.

In two 2018 pick-up districts and two Democratic open seats, the party is spending money to protect seats to ensure there are no surprise upsets — even though Republicans have no TV ads here.

Democrats are spending to protect two Des Moines suburban seats — Karin Derry’s HD 39 and Kenan Judge’s HD 44 — they flipped last cycle. Heather Matson of Ankeny and Kristin Sunde of West Des Moines seem to be secure enough in their new seats to not warrant TV spending. So are Dave Williams of Cedar Falls and Molly Donahue of Marion.

Ad buys for Judge are relatively modest, while Derry’s is significant and among the top of Democrats’ investments.

Derry’s 2018 victory over a Republican incumbent was one of the Democrats’ most impressive victories of that year—she won by just a few hundred votes in the once-solidly Republican district. The contest was expected to be close again, and Derry is up against Eddie Andrews, the GOP nominee who has engaged closely with the Trump campaign. However, Andrews does not appear to have ad buys in the Des Moines media market.

Meanwhile, Democrats have spent some funds to establish their candidates in two open seats — Sue Cahill had some ads up in the Des Moines market with her using a chainsaw in the aftermath of the derecho. She’s looking to replace Mark Smith in the Marshalltown district. Sioux City’s Steve Hansen, a former legislator, is reintroducing himself in the HD 14 district that Tim Kacena is leaving. Both districts usually lean Democratic, but can enter swing territory in bad years.

Republicans must have seen something concerning in the polls for incumbent David Maxwell. A Republican serving District 76, he’s vying for his fifth term representing Poweshiek County and most of Iowa County. He’s spent close to six figures–$99,305–on ads in the Des Moines TV market. Maxwell is facing both Sarah Smith, a Democrat, and Kamal Hammouda, an Independent challenger. Neither has spent money on TV advertising in the first three weeks of October. The district contains Grinnell, which could see heightened Democratic turnout this year.