The gold standard of Iowa polling shows Sen. Joni Ernst trailing her Democratic opponent and found less than 50% of Iowans approve of the job she is doing in Congress. Theresa Greenfield has out-raised Ernst more than once since launching her campaign a year ago, and national Republican groups are spending millions of dollars to protect her seat.

Combine that with Ernst’s ties to the “dark money” group Iowa Values, Democrats say, and you have a candidate fighting for her political future.

“Maybe she’s trying to skirt campaign finance laws because she’s worried about her election prospects,” said Tiffany Muller, president of End Citizens United, on a conference call Thursday morning with reporters. “Right now we’ve seen that she’s trailing Theresa Greenfield in the polls and she’s seen her approval rating plummet 15 points since 2017. She’s right to be worried, but that’s no excuse to break the law.”

End Citizens United, which has endorsed Greenfield, was part of a press conference hosted by the Iowa Democratic Party to shed more light on Ernst’s connection to Iowa Values, a political nonprofit runs ads supporting Ernst.

“We’ve seen a marked reduction in Joni Ernst’s approval rating with Iowans,” said Mark Smith, chair of the Iowa Democratic Party. ” … Iowans are very informed voters. They go for the truth on these kinds of issues.”

The IDP has obtained multiple invitations to fundraisers for Ernst’s reelection campaign showing Claire Holloway Avella, of Holloway Consulting, as the point of contact for questions about the event. 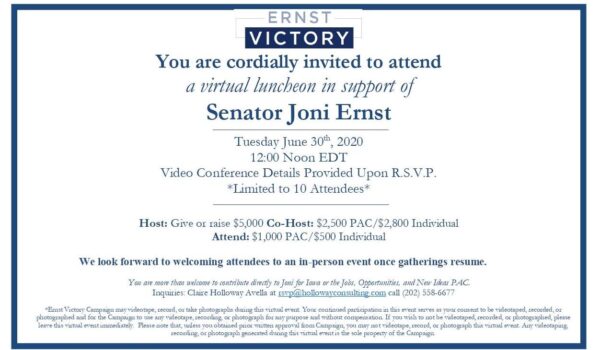 Holloway Consulting provides fundraising support for Ernst’s reelection efforts, as well as Iowa Values, which has come under scrutiny for its close ties to the Ernst campaign. Dark money groups like Iowa Values can accept unlimited campaign contributions and do not have to publicly disclose their donors thanks to the Supreme Court’s 2010 campaign finance ruling.

A December Associated Press investigation looked into documents, emails and a strategy memo that show “Ernst and her campaign worked in close contact with Iowa Values.” As a 501 (c)(4) tax-exempt organization, campaign finance law does not allow the group’s primary purpose to be campaign work or to coordinate with a candidate they support. Though Ernst’s team has not specifically refuted the AP’s findings, they deny any wrongdoing.

In an analysis of Ernst’s Federal Election Commission filings, End Citizens United found the senator’s campaign, leadership PAC and joint fundraising committees paid more than $137,000 to Holloway Consulting and Jamestown Associates, which ECU says is another consulting firm tied to Iowa Values, in the first three months of 2020. Throughout the 2020 cycle, ECU found, Ernst’s campaign and affiliated committees have paid the two firms $793,000.

Part of the AP’s findings were that Ernst appeared to pass a donor along to Claire Holloway Avella so the person could contribute to Iowa Values and help “push back” against negative ads directed at Ernst.

The fact Ernst’s campaign shares a fundraising consultant with Iowa Values, which markets itself as a “nonprofit, nonpartisan forum,” and is not legally allowed to coordinate with political campaigns, is “a degree of illegal activity that stands out for its brazen disregard for the law,” Muller said.

“The formation and coordination with this dark money group is a serious breach of public trust and campaign laws,” she said.

“Sen. Ernst must answer: Did she direct her top political aides to set up and run Iowa Values? And how does she explain the undeniable ties between her campaign and the dark money group?”

During the Democratic primary, Greenfield, who won on June 2 by nearly 23 percentage points, was criticized by her opponents for accepting donations from leadership PACs. Greenfield has insisted she does not take money from corporate PACs that lobby on behalf of specific companies and industries, and if elected to the U.S. Senate would work to end coordination between political campaigns and dark money groups and corporate PACs.

In 2018, Ernst and her fellow Senate Republicans voted to defend the Trump Administration’s anti-disclosure rule allowing nonprofit organizations, including those that are involved in politics, to keep secret their high-dollar donors. Last month, the Treasury Department and Internal Revenue Service finalized the rule so 501 (c)(4) organizations no longer have to provide the IRS names and addresses of donors who contribute more than $5,000.

“The idea that somehow these two candidates are equal on this issue is just not real at all,” Muller said. “[Voters] do see the distinction, and I think you see that reflected in the polls.”