In order to determine mitigation strategies for Iowa, Gov. Kim Reynolds is relying on a set of metrics developed by State Public Health Medical Director and Epidemiologist Dr. Caitlin Pedati and the IDPH. While the Governor continually refers to this as a data-driven process, there are catastrophic events that could occur under their current metric system and still not trigger a shelter-in-place order.

Starting Line dug into the numbers for one of the hardest-hit regions of the state to see what additional factors it would take to necessitate a stay-at-home directive from Reynolds.

This process breaks the state into six different regions, (seen below) and assigns them a numerical score based on four factors, that are each rated from zero to three. 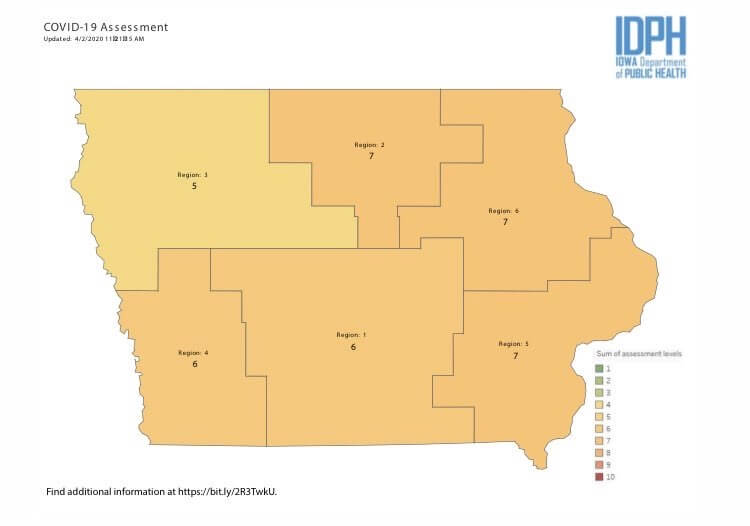 The factors that go into this analysis are:

This leads to a maximum of 12 points that each region could have. The governor recommends the following responses for a region when it achieves a certain value.

Starting Line looked at the numbers in Region 5, the southeastern portion of Iowa that includes Johnson and Scott counties. By the map provided, this region is already to seven points in the metrics. There is only limited information provided by the state, but using the map provided, statistics from the Governor’s press conferences, and statistics from the U.S. Census bureau, we were able to break down the numbers for this region and come up with the following table:

According to the U.S. Census Bureau, for the counties in Region 5, 16.87% of the population is older than 65.  This number is static and cannot change based on the spread of the virus. Using the table below that is in a report from the Iowa Department of Public Health, this percentage leads to an assigned value of 2.

This is perhaps the most significant metric, because it tracks how fast the virus is moving through the population.  Based on publicly reported numbers, this region has had 263 cases overall, but if you narrow it down to the past 14 days, it looks to be 227 (Johnson County had a large number of cases at the outset). The total population for the region is 663,558, so this comes out to about 34.2 cases per 100,000 people. This would earn the score of 2 because it falls between 21 and 49 cases.

Based on statements from Governor Reynolds, there have been no outbreaks in this region at long term care facilities. The only reported outbreak has been at a nursing home in Cedar Rapids.

This is the only metric that we do not know because the governor has not released the percentage of cases requiring hospitalization by county. However, using the fact the other metrics add up to 4, and that we know this region has a total score of 7, this category must have a score of 3. This means that the percent of identified cases requiring hospitalization for this region is over 15%.

Oddly enough, this is a metric that could actually decrease with more widespread testing, which many see as a method to find and quarantine more people carrying the virus to slow its spread. If you tested more people who are asymptomatic, the hospitalization percentage would drop. Right now, Iowa’s stringent requirements for administering a test means that it’s mostly going to those in the worst conditions, and those suffering mild symptoms are simply told to stay at home.

There could be a situation where more testing boosts the number of cases per 100,000 population with the virus that at the same time lowers the hospitalization metric. That hospitalization number could drop and make it harder to shelter in place without it actually meaning that things are getting better.

This again leads us to the table that was presented above.

What has to happen to get to a shelter in place

For this region to reach a score of 10 and trigger a shelter-in-place recommendation, it would need an additional 3 points.  Since the percent of population over 65 is stagnant, and the percentage of hospitalization is already maxed out, there are only two scenarios that would trigger that outcome. Those situations are either three outbreaks at a long term care facility, or two outbreaks at long term care facilities and a decent jump in the rate of infection per 100,000 people. But again, the hospitalization metric could go down with more testing, even though that new number wouldn’t necessarily mean things are getting any better.

While one of these situations could happen, the virus could continue to spread in dangerous ways without reaching that benchmark. Imagine a scenario where the virus is rapidly spreading through communities, but long term care facilities in the area have managed to avoid being affected. No matter how fast the virus is spreading, or how many people die, there would be no way in that case that the data could trigger a shelter-in-place order based on the Governor’s determination.