Iowa was to kick off the “official” beginning to the 2020 election season, and I was honored to be asked to serve as the caucus chair for the Williamsburg precinct in Iowa County. I had caucused before, but not with the buildup and number of presidential candidates this one would have, and certainly never having to “run the show.”

However, despite what the national media has reported regarding the problems with the reporting app (mostly justified), the delay in results, and other issues, these caucuses — for me — will be remembered for the many positives as well.

For instance, looking out from my table in the gym at Mary Welsh Elementary School, I could see a diverse coalition of voters who all cared enough about the future of this country to show up on a cold Monday night in February and let their voices be heard. These friends and neighbors were of all ages, social classes, and political persuasions. People got out of their comfort zones, stood up in front of the crowd, took the microphone and spoke with passion on behalf of their preferred candidate.

Despite this passion, the night proceeded smoothly with respect, generosity, and kindness on full display.

Much has already been written on the shortcomings of the reporting app, but I have to say it did work for me as caucus chair. It certainly was not without its problems in the test phase, however, as well as in many other precincts throughout the state. Much of the blame can and should go to the state party leaders who approved the purchase and use of the app, as well as the developers themselves who obviously did their jobs very poorly.

It was also head-scratching to see the Democratic National Committee nix the use of smartphone technology for voting, but then thought it fine to use in the reporting of the vote. Despite some of these shortcomings, overall the rest of the proceedings went very smoothly with multiple people coming up to me during and after the caucuses to say how well they thought things went. This was a credit to my caucus secretary and the numerous volunteers who pitched in and helped the night go as smoothly as possible.

My faith in democracy was also restored in that one vote really does still matter. For example, after the first round of voting, a young man came up to me to say he did not want to realign to another candidate for the final realignment. He was within his right to do this, but since there was still time left I asked him to talk with others, think it over, and then make a final decision.

Although leaning toward Bernie Sanders, he chose not to realign, which meant that after doing the final count, it went to a coin flip tie-breaker between Sanders and Pete Buttigieg, which Buttigieg won. In this particular scenario it awarded one more delegate to Buttigieg to go on to the county convention. So, to those who still think and may say, “one vote doesn’t matter,” it truly does still matter.

The final counts for the Williamsburg “city” precinct were as follows… 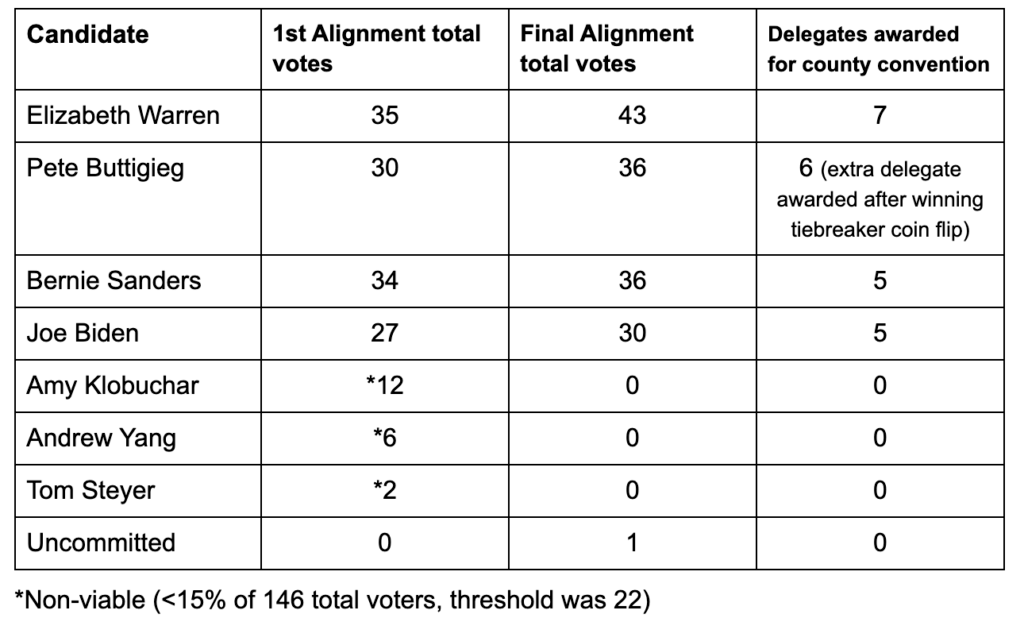 I’m not sure what the future holds for Iowa’s first-in-the-nation caucus status. This year’s cycle did no favors for Iowa’s reputation. The national media already denigrates our caucus process, citing Iowa’s lack of diversity compared to the country overall, and the time it took to report results, as negative factors. The timing and locations of the caucuses also make it tough to participate for those with young children, mobility issues, working third shift, etc.

Some of this criticism is justified.

However, the sincerity with which Iowans treat the process, the relatively cheap advertising that can be done in this state compared to others, and the ability to engage people in the democratic process — connecting with friends and neighbors in a way that regular primary voting does not facilitate — are all still positive outcomes of holding the first-in-the-nation caucus in Iowa.

Fostering an educated and engaged citizenry is one of the biggest challenges facing our country today, and the caucus process helps nurture these essential traits for a healthy democracy. Furthermore, in our most populous and diverse state, California, it takes weeks to report vote tallies instead of the days it has taken to report Iowa’s. So, as with many other things in life, the grass isn’t always greener on the other side.

I still believe in the best of America — in all of us — and that our best days are yet to come if we’re willing to come together and work for them.

1 Comment on "One Chair’s Experience: Reflections On The 2020 Iowa Caucuses"