The collection of results from Iowa Caucus precincts around the state were significantly slowed last night when an unexpectedly high number of precinct chairs couldn’t use the Iowa Democratic Party’s reporting app or decided not to. That led them to utilize call-in lines to the state party, which got inundated with fake calls and media requests at the same time.

Many precinct chairs reported to the media and on social media that it was taking as long as over an hour to get through to anyone at the state party.

In precinct chairs’ packets, there was a public hotline number and a precinct chair hotline. Many people in the call center who were fielding calls from caucus chairs also got many calls through what appeared to be the public hotline, which was listed prominently on the state party’s website. That led to a significant amount of calls coming into the party’s call center that weren’t from caucus chairs, jamming up the system.

Multiple people in the room reported receiving non-stop calls from two phone numbers, one of which had a Dubuque-area number, that clogged up the phone lines. No one was on the other end of the call when answered, and the number would call back almost immediately to the room after someone hung up on it. It only took up about 30 seconds of someone’s time each time it happened, but those still added up.

After a while, those in the room were able to figure out the exact phone numbers and got it shut down pretty quickly.

The other widely reported problem from those working the phones was the number of journalists who called into the line to ask about what was happening and if they could get results.

There were also some prank calls, a number of people with southern accents calling from North Carolina, and the occasional person just calling to yell at everyone.

When the calls with precinct chairs connected, things ran pretty smoothly. Some people in the room said they were able to record each chair’s results in about an average of six minutes.

Part of the issue there, however, was the volume of precincts that decided to forgo the app or couldn’t get it working. There were a few dozen staff and volunteers in the call room. Iowa has nearly 1,700 precincts; it wasn’t immediately clear how many chairs chose to skip the app, but anecdotally it seemed to be a high percentage.

Starting Line reporters searched through the usual internet message boards and forums for signs of any coordinated effort to jam up the IDP’s lines  but didn’t find any. The only references to the phone number were from an Andrew Yang group on Reddit that was trying to be helpful for Iowans who had questions.

[Update: It appears that there was an effort online to “clog the lines” at the IDP from a message thread on 4chan. Interestingly, the number they posted was just the main line to the IDP that you can easily find online.] 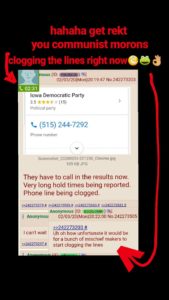 Moments ago, the IDP told presidential campaigns on a call that they would begin to release results today at 4 p.m. Meanwhile, the party has sent volunteers, out around the state to physically collect the preference cards that were used to record caucus-goers choices this year in order to create a paper trail.