Des Moines has opened a new exhibit linking current political and social issues with historical housing discrimination in the city, and 2020 Democratic candidate John Delaney was one of its first guests.

“Undesign the Redline” opened earlier this week at Franklin Junior High School and examines how government policy from the 1930s to current day created segregation and disinvestment in some Des Moines communities, while benefiting others. After touring the exhibit Friday night, Delaney said the nation needs to ensure that decisions around housing, public education, health care and public transportation are made with equality in mind.

“This is pretty remarkable,” Delaney said after viewing the exhibit. “It’s amazing how much of life is determined by where your home is. … Where you live is really important for so many aspects of your life. And we need to make sure every American has affordable housing, dignified housing, housing where they can access good, high-quality schools and public transportation.”

The exhibit, created by the Polk County Housing Trust Fund and social impact firm, Designing the WE, includes loan corporation maps from the 1930s, depicting the areas of Des Moines where low-income communities are grouped. 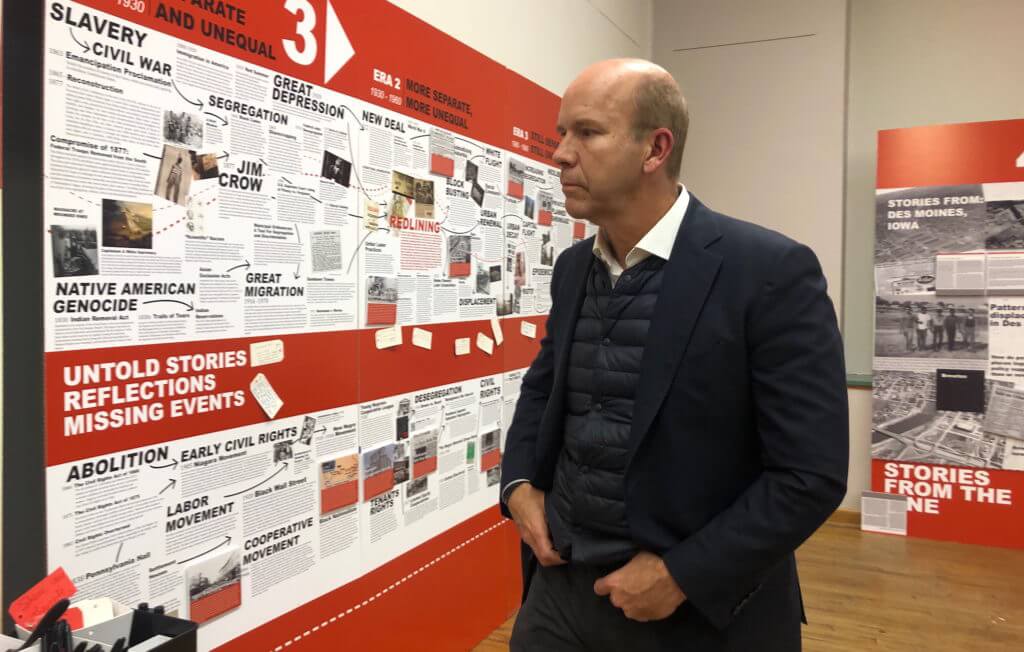 It also includes conversations with older Des Moines residents who experienced firsthand the enforcement of unfair housing policy. Their stories reflect on the displacement they experienced and how they, as African American residents, were able to create new communities.

“There’s one story where this woman basically said when she had to vacate her neighborhood and move to a new school, she was in kindergarten, they put all those 25 kindergarten students from the African American school into special ed at the new school,” said Lauren Johnson, Polk County Housing Trust Fund director of communications, who gave Delaney the tour.

The Polk County Housing Trust Fund, along with other housing advocates, have long engaged presidential candidates with the affordable housing needs that exist around the state. Though he’s since dropped out of the race, Julián Castro has toured affordable housing units at downtown Des Moines’ YMCA Supportive Housing Campus and Sen. Cory Booker visited Central Iowa Shelter to serve Thanksgiving meals, among other examples.

The groups have also attempted to schedule a debate or forum focused on affordable housing this election cycle. One, slated for October, was scrapped when top-tier candidates Joe Biden, Elizabeth Warren, Bernie Sanders, Pete Buttigieg and Kamala Harris couldn’t commit.

Delaney reiterated the need for this type of forum.

“We should have kind of a housing-oriented forum, is what I think we should do,” Delaney said.

“This guided tour into the local history of race, class and housing policy will make some uncomfortable, and it should, given the damage done by these programs. But thankfully the Exhibit doesn’t stop there,” said Burnmeister. “It also provides ways to mitigate the damage done and proactively address inequities in future policies and programs in our region.”