Iowa Congressman Steve King drew a “Pants On Fire!” rating today from the fact-checking website PolitiFact, for pushing a conspiracy theory that the whistleblower who spoke out against President Donald Trump is George Soros’ son.

King, who often buys into viral fake news stories, posted a tweet at 6:21 a.m. Thursday and later took it down.

King wrote: “Adam Schiff said, ‘I do not know the identity of the whistleblower.’ @RepAdamSchiff here are four strong clues.” 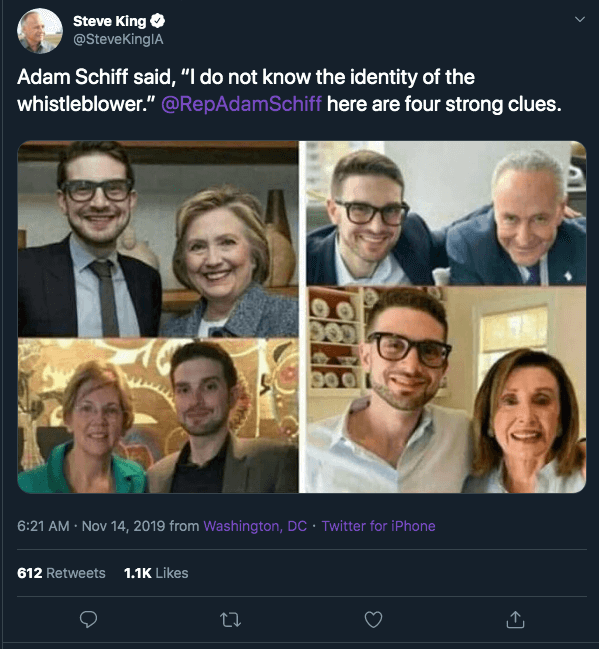 George Soros is a longtime Democratic fundraiser who often draws the ire of Republicans for his support of political candidates.

According to PolitiFact, the viral posts alleging Alexander Soros was the whistleblower inside the federal government, were flagged by Facebook as part of the company’s efforts to combat misinformation on its News Feed.

On Thursday afternoon, King replaced his original tweet with a new one:

Adam Schiff said, “I do not know the identity of the whistleblower.” Me either, but @RepAdamSchiff here’s a better clue. pic.twitter.com/0DP9lOClpB

Under federal law, a whistleblower’s identity is protected, but that hasn’t stopped President Trump and many fellow Republicans for demanding the name of the government employee.

King’s post may be tied to a conspiracy theory spouted Wednesday night on Fox News, falsely accusing George Soros, who is Jewish, of controlling “a very large part of the career foreign service of the United States State Department.”

Invoking #Soros as controlling the State Dept, FBI, and Ukraine is trafficking in some of the worst anti-Semitic tropes. @FoxNews won’t have Chris Farrell on for making similar remarks, and they should hold the same standard for @JoeDiGenova. https://t.co/IbCQCdXZfL

In the last 24 hours Fox News and Steve King have promoted anti-Semitic conspiracy theories that George Soros controls the FBI and State Department, and that his son is the whistleblower. pic.twitter.com/kjTq53K1kM

“He corrupted FBI officials, he corrupted foreign service officers,” said Fox News contributor Joe diGenova on Lou Dobbs Tonight. “And the bottom line is this, George Soros wants to run Ukraine and he’s doing everything he can to use every lever of the United States government to make that happen, for business interests, not for good government business.”

.@SteveKingIA is circulating false information, claiming Alexander Soros, our deputy chair, is the whistleblower. He is not. Attempts to out the whistleblower violate protections put in place to help people in government root out waste, fraud, and abuse. https://t.co/QAQXTSwzEY

A portion of the statement read: “Representative King should know better, but as a member of Congress with a long established history of white nationalism, anti-Semitism, and Islamophobia — whose behavior is so abhorrent House Republican leaders stripped him of his committee assignments — our expectations of his suddenly showing principles are low.”

1 Comment on "King Tries To Out Whistleblower, Shares False Conspiracy Theory Instead"