We pulled away from downtown Des Moines at 7:45 a.m., heading to our first stop of the day, a town hall in Tama, Iowa. I needed some caffeine, and was praying Rob Sand did, too.

Before we even got out of the city, we pulled up at a red light next to a QuikTrip.

“Let’s just stop here,” Sand said. “I need a coffee, and we’ll only lose a couple minutes popping in here, rather than going out of our way to find something else.”

I hastily jumped out of the back seat, and ran inside for a DoubleShot and a slice of breakfast pizza, returning to the car in sync with Sand to get our road trip underway.

I didn’t think much of the decision to stop at QuikTrip as it unfolded, but it was one made with efficiency in mind.

State Auditor Rob Sand’s love for breakfast pizza is far from a secret, but he’s very open about his preference for Casey’s and Kum & Go. Yet, here we were, gladly grabbing QuikTrip breakfast pizza, for the simple purpose of shaving mere minutes off of a drive.

In hindsight, there couldn’t have been a more efficient, and fitting, start to the day.

Efficiency is a concept few people oppose aspiring to; it means minimal waste — time, dollars and energy saved. Being efficient isn’t always easy, though, and in the context of Sand’s position as state auditor, it means promoting and enforcing rules and regulations on myriad levels.

But Sand has a near unmatched dedication to the law, regulatory mechanisms, and efficiency.

For most of the Republican Party, laws and authority over citizens are necessary, but they believe business and financial regulation inhibit economic growth. In Iowa, the Republican Party controlled the Auditor’s Office from 1967 until 2018, when Sand, a Democrat, was elected.

“At the end of the day, look, we have laws on the books,” said Sand, in an interview with Starting Line. “If you get elected, you should be following the laws. If you don’t want the Environmental Protection Agency to protect the environment and human health, then you should campaign on repealing the laws, not just on appointing people who are not going to make it work very well.”

“Putting people in charge of government, who don’t think the government can do a good job, is like putting vegans in charge of the kitchen at your steak house.”

For many years, most Iowans didn’t understand the full scope of the auditor’s responsibility and potential impact.

“I think that more people are realizing that the Republican power structure is so anti-government that if you want someone to promote good government, you should put someone in that job that does believe that there is a role for government, and that’s precisely what we’re doing,” Sand explained.

An Audit Of The Auditor’s Office

Most understand auditing; it’s a financial examination. But how is the Auditor’s Office supposed to operate?

“Most people are actually surprised to see, ‘Oh, I didn’t know that the state auditor was in charge of promoting efficiency,’” Sand said. “Well, that’s because the state auditor just hasn’t done it before and now we are doing it.” 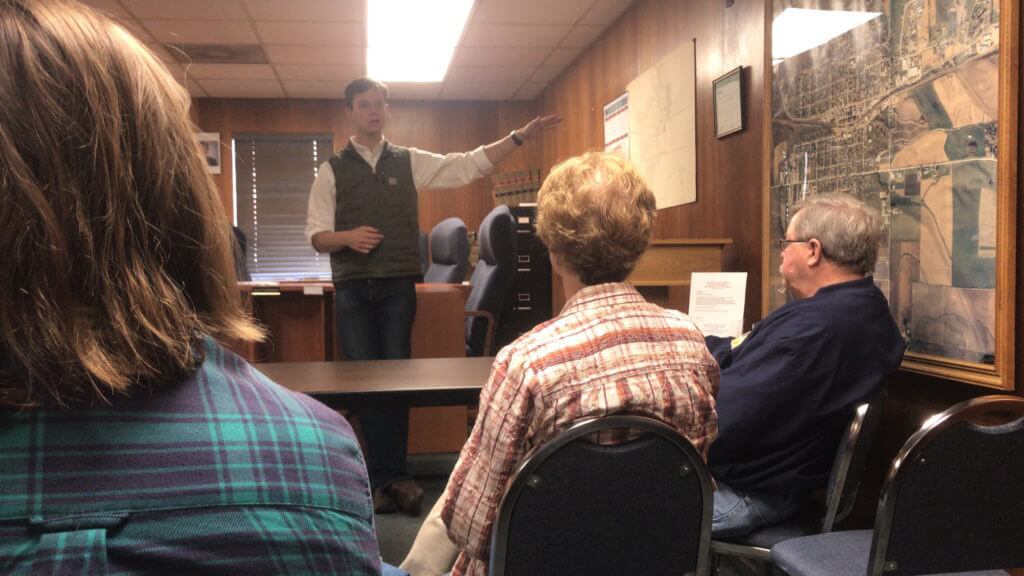 For Sand, the auditor is a watchdog, out to protect taxpayer dollars from theft and abuse. But it goes beyond that; the auditor can also propose legislation, create policy for statewide auditing operations, create and promote models for efficiency, and reward communities that operate in a financially-efficient manner.

And just a short while into his four-year tenure as Iowa’s auditor, Sand is making the rounds to all 99 counties to introduce himself to elected officials and everyday residents.

“I think it’s easier to represent people when you’ve met them,” he said. “These are public events. I take questions at every one of them, and I’ve never had a situation where there were so many questions that I couldn’t answer them all.”

“I’m trying to make myself available as an elected official, which I think is a good thing. Elected officials should be close and accessible to people. I think it helps me because I get out there and have an opportunity to hear what people are thinking about.”

The town halls help Sand meet constituents and get a gauge on their concerns, providing them with the opportunity to meet him, speak face-to-face, and ask whatever questions they have about the Auditor’s Office. It also gives people a chance to tell Sand about situations they think his office should investigate, like potential wrongdoings they aren’t comfortable sending in a email.

From Sand’s position, it also allows him to inform people about the duties of the office and promote his approach to government service — which people seem to appreciate. Throughout the day on Tuesday, in four stops, people consistently expressed that they didn’t realize how much the state auditor could actually do, and how much assistance the office could provide.

Sand has a law degree and spent time in the Attorney General’s office as a prosecutor. For him, becoming Iowa’s auditor presents the opportunity to help Iowans trust their government more, by consistently showing them that public servants are trying to do the right thing.

“I get excited about this because I’m a good-government nerd. Government isn’t the answer to every question, and it can’t solve every problem,” Sand said. “But, if it has the facts right and the information right, and the right people running it, it can do a lot to mitigate problems or, at least, create structures and legal incentives that influence people toward doing the right thing.” 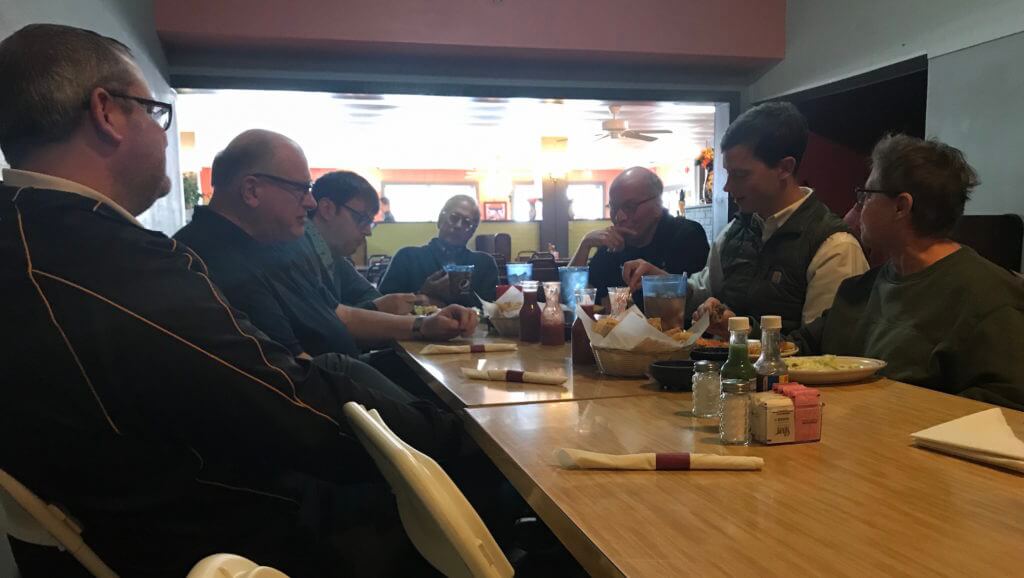 Part of pursuing the right course of action in office is ignoring partisan politics and creating an environment where everyone knows they will be treated the same, regardless of party affiliation.

“I think a piece of it for me is that it’s not a deeply partisan position,” Sand said.

“Government and democracy should be about problem solving, and this office is in a unique position to investigate, uncover facts and provide that information so that problems can get identified and actually get solved.”

But being a statewide official means representing and talking to people from all over the political spectrum. And while it doesn’t mean he has to bend on his personal morals and ethics, Sand recognizes that having a non-partisan approach to a regulatory position allows him to more easily communicate his goals.

“It’s an easy thing, to sort of cheerlead for one position or the other, or just have a laundry list of positions that are typical for your party and what they’re doing,” he said. “I think if we want to get things working better we have to be more focused on finding the right answer and doing things the right way.

“That’s what I want to do; I want to do things the right way and I want to solve problems. Nobody has a monopoly on the truth, so looking at things with that motivation makes it a lot easier for me to do the work that challenges people in both parties to do better on behalf of the public.”

Our lunch break for the day took place during a town hall. With a busy travel schedule and the responsibilities of his office, Sand keeps the commitment to efficiency by simply setting up a luncheon town hall, killing two birds with one stone.

We had time to chat in and out of the car throughout the day, but there were also quiet periods in the car, as Sand took phone calls and responded to emails to keep up with business back in Des Moines.

With the exception of one conversation we had about music, he was on the clock and, on his game, from 7:45 a.m. until we got back to Des Moines just after 5 p.m.

From Sand’s perspective, his drive to inspire people to do the right thing, and create a system that promotes doing so, is key to making sure our government can operate with public trust backing it. It’s also one of the more rewarding parts of the job.

“One of the most rewarding moments, to me, is when someone communicates that you’ve actually improved their trust in government,” Sand said. “Look, government is us. We are picking how we run the system; it’s self-government and it’s an experiment in self-government that’s been going over for a little over 200 years now. It doesn’t work if people don’t trust ourselves to create a system that works.”

In his short time in office, Sand has already built up quite a following, especially on social media with his frequent Twitter usage. But, he has also shown initiative for creating a trustworthy government, and people seem to be taking notice and showing gratitude.

“I’ve had people walk up to me at the state fair, or even places like construction sites, and take a second to walk up and say, ‘Hey, I saw that you did this thing, thank you for doing that. It makes me think that this can work — we just need to get the right people in there,'” Sand said.

1 Comment on "A Day On The Road With Rob Sand: Redefining The Auditor’s Office"