Amidst a day full of chanting, marches, sign wars and a number of other moves to demonstrate organizational strength, Elizabeth Warren’s Iowa team diverged from the pack to focus on something very specific: talking to voters.

By the end of the night, Warren found herself in first place in the Des Moines Register’s Iowa Poll, with a narrow 22% to 20% lead over Joe Biden.

Though the two things weren’t directly linked (the poll ran in previous days), the overall approach of Warren’s strategy that was on display at the Steak Fry is what’s helped boost her poll numbers here. And her ground game, seen by most observers as the strongest in the state, has helped carry that plan out.

At the Polk County Steak Fry at Des Moines Water Works on Saturday, Warren’s team decided to not have a massive pre-speech rally, nor a big march into the event. Instead, they did a training session early in the day with volunteers before sending them out in the event to mingle with attendees. “We’ve proved at other events this summer that we can get hundreds of people together to scream and chant and make a huge fuss, but at the end of the day that’s not how you win,” said Morgan Sperry, an organizer for the Warren campaign in Dallas and Madison Counties. “You win by talking to people, finding out where they are and having these persuasive conversations.”

The Bernie Sanders’ campaign also chose not to participate in the day’s festivities, which is their usual approach to party events, instead sending volunteers out to door knock. That left Warren’s team as the only ones spending the entire time getting out and talking to voters at the event (other campaigns obviously talked with attendees, it was just Warren’s sole focus). Over 12,000 people attended.

Olivia Ellis, a Warren organizer in Ames, Iowa, said that Warren wants to invest in the field, and put an emphasis on talking to voters, “and that’s exactly what we did today.”

“It’s not every day that there’s 10,000 Iowans in one place, so we would be remiss to not be talking to them about who Elizabeth Warren is, where she comes from and what she’s fighting for,” Ellis said.

And the work seemed to pay off. When it came time for Warren to speak, third in the day’s order, there was an eruption from the crowd as a sea of liberty green signs were raised over attendees’ heads to welcome the Senator to the stage. 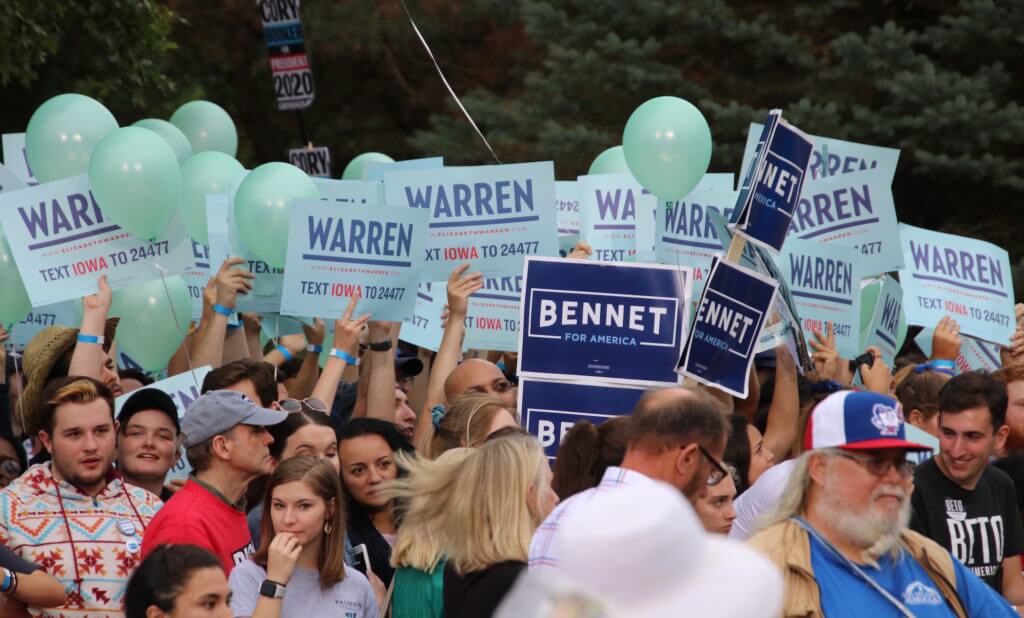 Senator Warren is also one of the few candidates who really continues to shape her messaging throughout the campaign. Even today, just a few months out from the caucus, many candidates were still doing an introductory-style speech at the Steak Fry. Warren opened her speech focusing on the impeachment of Donald Trump, a day after more news broke on the Ukrainian situation.

Other parts of her pitch to the crowd contained tried-and-true lines central to her candidacy.

“We need to protect our democracy,” Warren explained. “We need a constitutional amendment to protect the rights of every citizen to vote, we need to stop partisan gerrymandering, reverse every racist voter-suppression act, and we need to overturn Citizens United.”

Throughout the speech, Warren’s reception was excellent. Specific pieces of her speech drew large applause, but she also received a warm goodbye when her speech concluded. 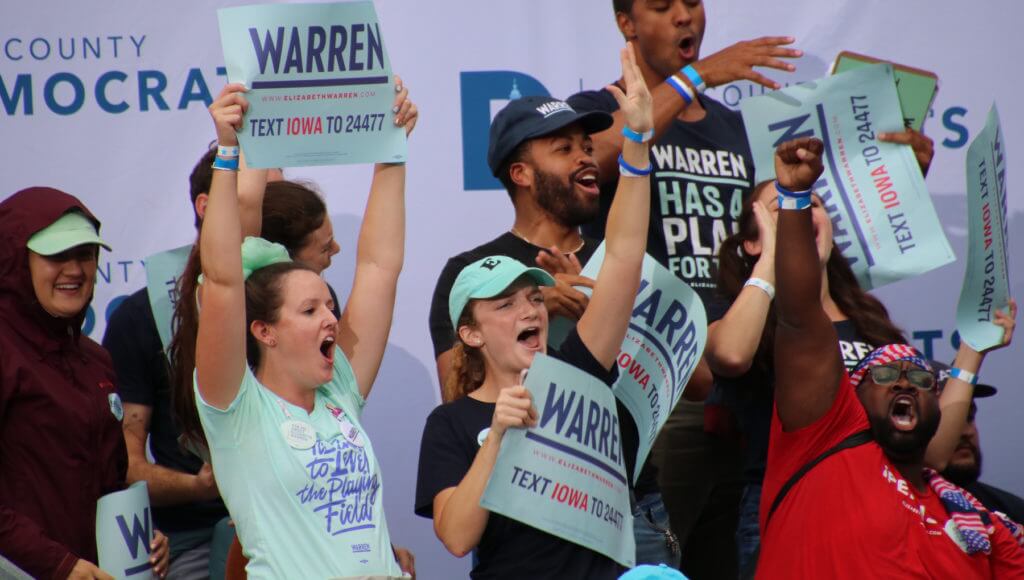 “I really like her roots, that she was a school teacher; she gets what it’s like to be a normal person,” explained Ellen Vroege, a 21 year-old student who lives in Des Moines. “I like her energy, I like that she’s a woman, I like her priorities with climate change, gun control, women’s reproductive rights — those are all things I’m really for.”

Warren seemed to inspire some hope in much of the audience with her speech, but some people who attended are just really big fans of the plans.

Early in the day, Ellis and Sperry needed some help from other organizers and volunteers to put on their costumes. The two of them dressed up as pennies for the entire event, and walked around together to promote Warren’s two-cent tax proposal – also known as the Ultra-Millionaire Tax. Other Warren staffers affixed single liberty green balloons to themselves and wandered the fields to talk with caucus-goers. The balloons floated above the organizers heads like a little help desk avatar symbol, alerting Iowans who to go to if they had any questions about Warren. 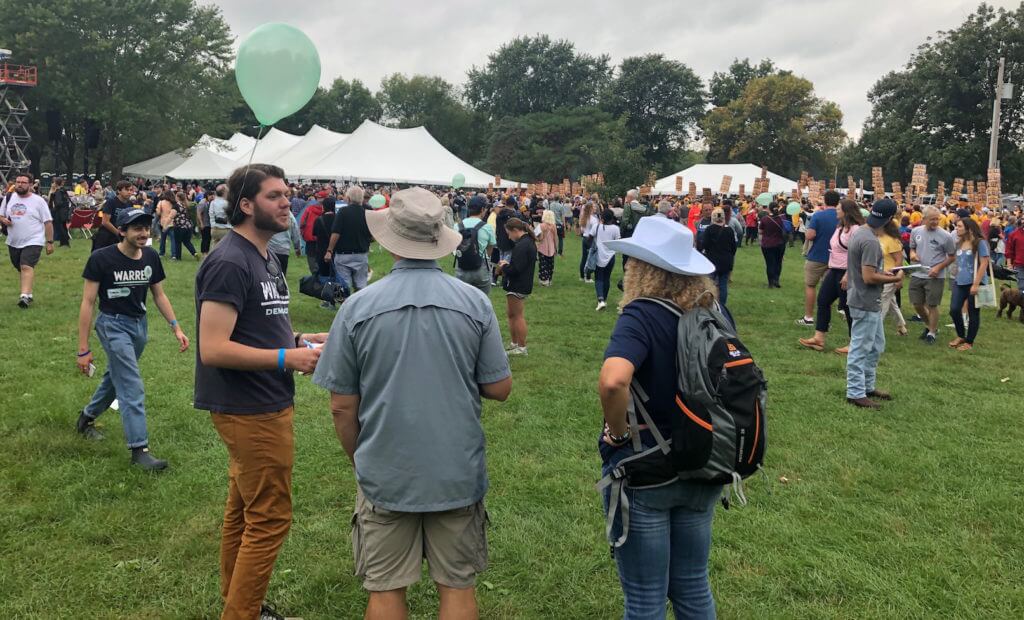 “I had the time of my life [today],” Ellis said, discussing walking around all day dressed as a penny, talking to would-be caucus-goers about Warren’s plans. “Here’s the thing, it’s an incredible ice-breaker, first of all. Second, I’ve never seen people so excited about a policy proposal, it’s incredible.”

When Warren brought up her tax proposal on stage, the Steak Fry audience burst into a “two cents!” chant, interrupting the Senator’s speech momentarily. 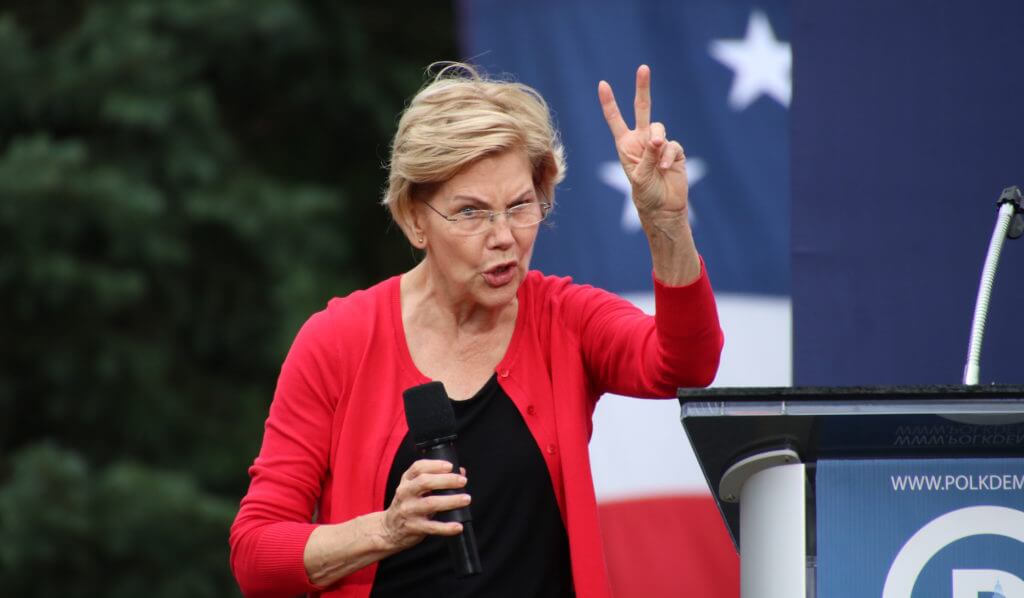 “Two cents on the top one-tenth of one percent. What can we do with that?” Warren asked the boisterous crowd. “We can provide universal child care and Pre-K, raise wages for childcare providers and Pre-K teachers, make college free for anyone who wants to go, and we can cancel student-debt for up to 95% of people. We can do all of that for two cents on the dollar.”

With another cattle-call event down, another strong showing for Warren and a night where her supporters can delight in her new first-place standing, the only thing to do next is keep building the organization off the same message that’s gotten them this far.

“I think it also speaks to the fact that people love that she has a plan for things, they’re obsessed with it. It’s not like it’s this esoteric, intellectual thing. People are in a crowded field screaming, ‘two cents,’ it really is a movement,” Sperry said.

After speaking to a big audience, Warren went to her booth to take selfies, and hundreds upon hundreds of people stood up, left their seat and waited in line, despite the rain, to get their picture taken with her.

“She’s versatile, she’s definitely a front-runner – top two for sure. With this line, just look; people want to say they got a picture with the future President of the United States,” Vroege said.

As those Democrats waited to get their photo, dozens of Warren staffers worked the line, signing people up on caucus commitment cards and to volunteer. One more small organizational step into building an operation that can ensure those good poll numbers turn into a good caucus night 135 days from now.

4 Comments on "Why Is Warren Leading Now? Look To Her Steak Fry Strategy"