The senator hosted a town hall in front of nearly 2,000 on Thursday night at the largest stand-alone event the Democratic hopeful has had in Iowa this far, her campaign said. The event, held at the University of Iowa’s Memorial Union, follows her historic rally of 20,000 people packed into Washington Square Park in downtown Manhattan on Monday night.

The senator touched on the hallmarks of her campaign — attacking corruption, making structural changes in the economy and protecting democracy – with the same speed, in the same direction she always has.

“I just want three things,” Warren said. “These are three things that are deeply intertwined. Because for me, they’re all about what this country should stand for. And it should be about opportunity.”

Warren’s momentum is ever-present. As the venue started to fill, chatter started among students and community members about the candidate. A single row-boater stopped to gaze at the crowd from the water beneath a “Warren green” colored bridge.

Libby Pasquariello, a nurse from Decatur, IL, traveled to see the senator.

“What drew me to her was her attitude early on, when Trump got into office and she immediately started being loud about resisting,” Pasquariello said. “And I’d love to see a woman in the White House.”

Four years ago, Tyler Chlfant, a senior at the University of Iowa majoring in English, said he was a Bernie Sanders supporter, but has since shifted towards Warren.

“As soon as I found out she was running, I knew she was a front-runner for me,” Chlfant said. “It comes down to a personality thing. She seems like she could work with people more.”

Then, after an introduction from Sen. Zach Wahls, D-Coralville — who noted he doesn’t yet know who he will caucus for but is feeling positive about Warren — the senator began her speech by addressing Friday’s climate strike. 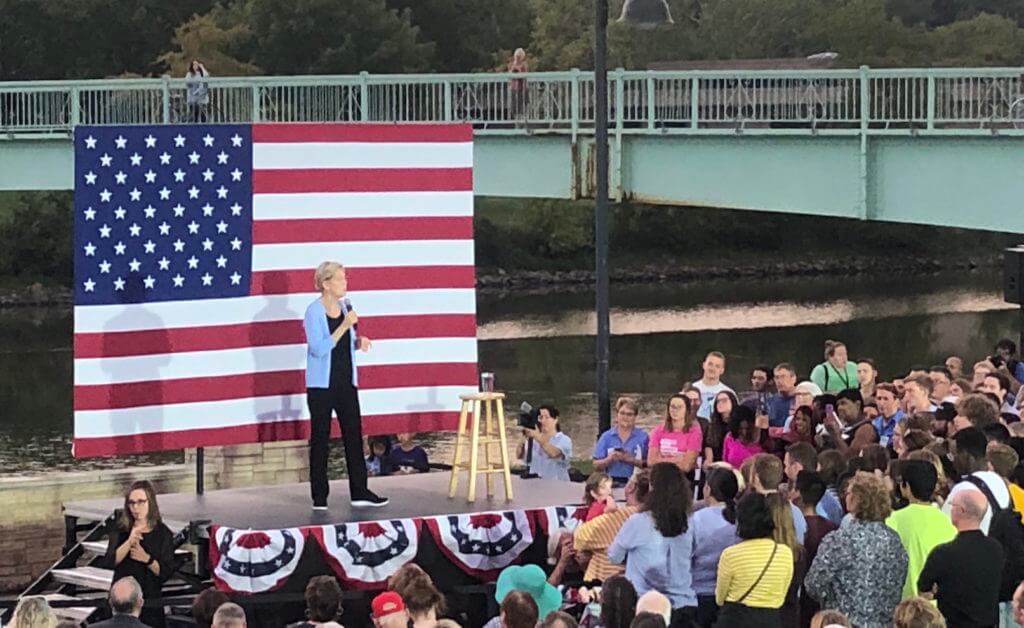 Callie Eyman Casey went to high school in Iowa City and is now an internal auditor in Victor, Iowa. Her grandmother was volunteering at the event but she tagged along because of all the Democratic candidates, she likes Warren’s policies the best.

“I like the student loan policy. I like that she adopted Jay Inslee’s climate change policy, I thought that was really smart. I would say she would be the one I would be most likely to support,” Eyman Casey said.

Warren then took time to discuss her backstory as a public school teacher and her three-pronged approach to governing, among other things.

Greg Batenhorst, the superintendent of the Mt. Vernon school district was at the town hall with his wife Mary Lou, an English teacher at Kirkwood Community College and Cornell College.

“We’re both educators, so we’re privy to education policy,” Greg Batenhorst said. “Her tagline is ‘she has a plan for that,’ and she does. She is very thoughtful, and whether you agree or disagree with them, she makes it very clear where she stands on the key issues. She doesn’t dodge the tough questions.”

Warren’s ‘plan’ tagline was highlighted often throughout the night.

Eileen Murray, a sophomore at the University of Iowa studying microbiology, was a summer fellow for Warren. Murray said she wasn’t committed to the candidate before she started her fellowship, but really appreciates the approach Warren is taking for the environment and holding the corporations accountable.

“I like that she has feasible plans that are comprehensive. I also think it’s important that she thinks everything is connected,” Murray said.

Later in the evening, the senator fielded several questions from the crowd. Lina-Maria Murillo, a Gender, Women’s and Sexuality Studies and History professor at the University of Iowa, asked Warren what her plan was to deal with the racial issues in the United States and the rise of white supremacist violence.

“White nationalism is a domestic terrorist threat,” Warren said. “And we need to call it out. We need a Justice Department that investigates and prosecutes. It is critical to our survival going forward.”

And finally, the end of the night, the senator took her 60,000th selfie.