“Frustration” was the word Congresswoman Abby Finkenauer often used to describe the mood of her agricultural constituents during a trip throughout her district last week. On Wednesday, Finkenauer met with multiple groups of concerned farmers, manufacturers and ethanol producers, many of whom told her they were at their wits’ end with the president’s trade disputes and undermining of Iowa’s ethanol industry.

“We brought folks together on this issue and we had one woman literally look us in the eye in that committee, saying that she’s telling her three sons right now not to go into farming because she’s worried about her future,” said Finkenauer, describing a House committee meeting to a group gathered at the County Line Feed Mill in La Porte City.

Finkenauer, elected in 2018 to represent eastern Iowa’s 1st Congressional District, first flexed her political muscle in the Iowa Legislature, particularly in the Republican-controlled session of 2017 that brought about devastating changes to collective bargaining rights and further eroded the strength of labor groups.

Now in the U.S. House of Representatives, when Finkenauer talks about the impact of Republican President Donald Trump’s policies on Iowa’s farming economy, it’s not partisan, it’s personal.

“Immediately I thought of my sister and brother-in-law who have a two-year-old and now they have a little four-week-old at home, too … and they want to pass that farm on, and they’re worried,” she said. 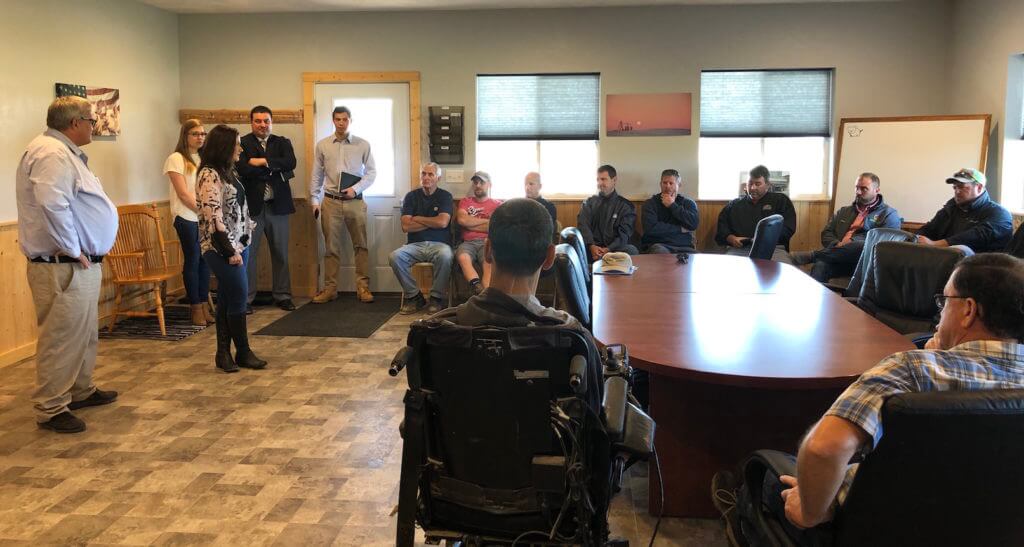 Wednesday morning at the feed mill in Blackhawk County and at the Blackhawk County Corn and Soybean Plot, Finkenauer heard from constituents struggling to make a profit at a time when commodity prices are low, demand has deteriorated and market uncertainty is running rampant.

“We’re all frustrated with how long this is taking,” Finkenauer said, of Trump’s prolonged trade war. “Anything we can do to make sure, again, that they know what’s actually happening on the ground. This is not just some trade war on Twitter or anything like that, this is people’s lives, this is the future of our state.”

Bill Northey, undersecretary for farm production and conservation at the U.S. Department of Agriculture, and a former secretary of agriculture in Iowa, also joined Finkenauer on her district visits.

When asked in La Porte City what advice Northey had for young farmers working to keep their family business afloat, he was hopeful prices eventually would bounce back and new trading routes would open.

“I would argue that for the long term, the world needs what we do in agriculture,” he said. “We still have, I would argue, the best agriculture in the world, and we’re going to have, I believe, trade policies that’s going to let us take advantage of that. I certainly believe there’s going to be some opportunities for renewable fuels as well.” 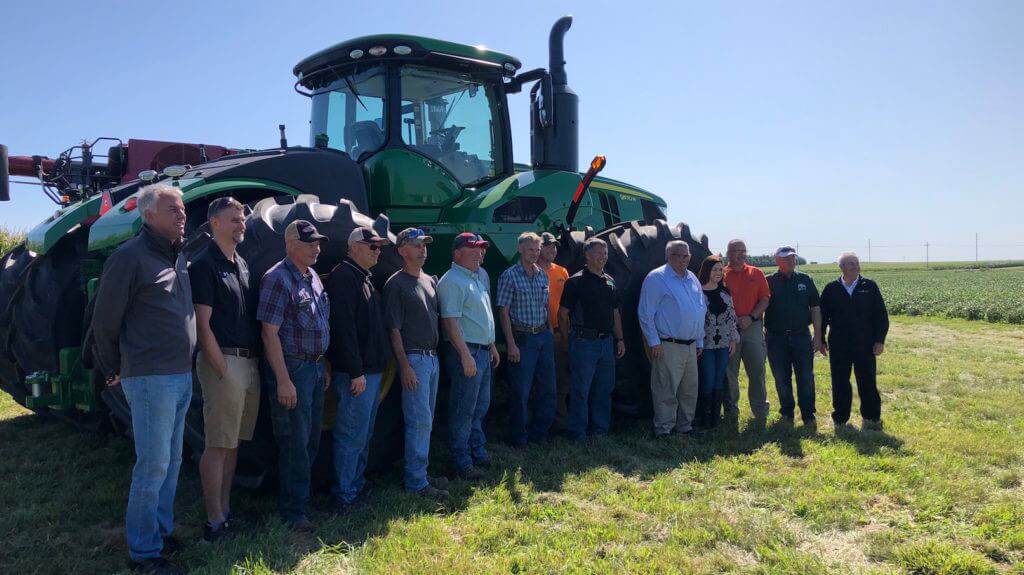 As part of her visit, Finkenauer’s staff distributed copies of her eight-point plan to strengthen Iowa agriculture, encouraging the group to make suggestions and provide feedback.

Her priorities included: easing regulatory burdens for farmers and producers; promoting the state’s renewable fuel sector; and expanding commodity markets and reducing barriers to trade, in addition to other initiatives.

“I don’t care who’s sitting in that White House. I do not care if it is a Democrat, if it is a Republican,” Finkenauer said. “I want the president to be successful when it comes to these trade deals because, quite literally, the future of our state depends on it.

Both groups that Finkenauer visited wanted an update on the status of the United States-Mexico-Canada Agreement [USMCA], Trump’s trade agreement meant to replace the current policies of NAFTA.

The USMCA was approved by the nations’ three leaders in 2018, but still must be ratified by legislators in the U.S. and Canada before it can take effect. Mexican lawmakers approved the deal in June.

Northey, a Republican and an advocate of the plan, said USMCA was “a clear win for agriculture.”

“I think passage of that creates momentum for the conversations that we need to have with China, as well,” he said. “I think if we delay too long, certainly if it doesn’t pass, I think that undermines the credibility for all of us on trade and limits our ability to make the progress on trade.”

Despite accusations against House Democrats that leadership is slow-walking the agreement as an affront to President Trump, Finkenauer said she wanted to see USMCA voted on and approved, but the party was working on provisions in the bill related to prescription drug prices before moving it to the floor.

“I want to make sure that we get something done and we get it done sooner than later,” she said. “I’m frustrated at the length of time that it has taken.”

When Congress resumes its work next month, Finkenauer said she would continue to uplift the experiences of Iowans in an effort to get the Trump Administration to pay attention to the damage caused by his trade war and refinery waivers.

Last week, Finkenauer led a bipartisan group of House members in calling for an investigation by the Government Accountability Office into the Environmental Protection Agency’s use of Small Refinery Exemptions. Since Trump took office, an unprecedented 85 waivers have been granted to oil companies, allowing them to skirt regulations requiring they blend ethanol into their products.

“When you go after my neighbors and my family — and that’s quite literally who we’re talking about here, in this district — I’m going to call you out on it and I’m going to make sure that the folks in this district are heard,” Finkenauer told Starting Line. “And that, again, is not me being partisan or anything like that, it’s me being an Iowan and caring about our future. I wish there was more people in Washington doing the same.”

5 Comments on "Finkenauer: “The Future Of Our State” Rests On Trade Fix"