While the State Fair kicked off in Des Moines yesterday, I continued my hitchhiking trek across Western Iowa with the presidential candidates. In case you missed my first story, I discovered this week that several of the candidates’ events line up just perfectly where you can catch a ride from each to the next stop of someone else.

After getting dropped off by Amy Klobuchar’s team in Storm Lake late Wednesday night, my Thursday started early (well, as early as I could force myself out of bed) to finish up some writing before Kirsten Gillibrand rolled into town. I had picked the only hotel that was within a morning stroll to her coffee shop drop-by.

About 40 local Democrats crowded around the tables for Gillibrand. Her husband Jonathan (who is British, by the way) comes in first to apologize for being a few minutes late, explaining it took a bit of maneuvering to park the campaign RV, which he’s driving.

“I’m the director of fun!” shouted the Gillibrands’ youngest son, Henry, who burst into the coffee shop with a bubble-maker and seemed to be enjoying himself quite thoroughly throughout the day.

Gillibrand introduced her family after she entered and shook hands, saying of her husband, “He’s a fine driver and has been keeping us safe.”

She went through her usual stump speech, then took questions on Medicare for All, what she’d look for in a vice president pick and wage theft. 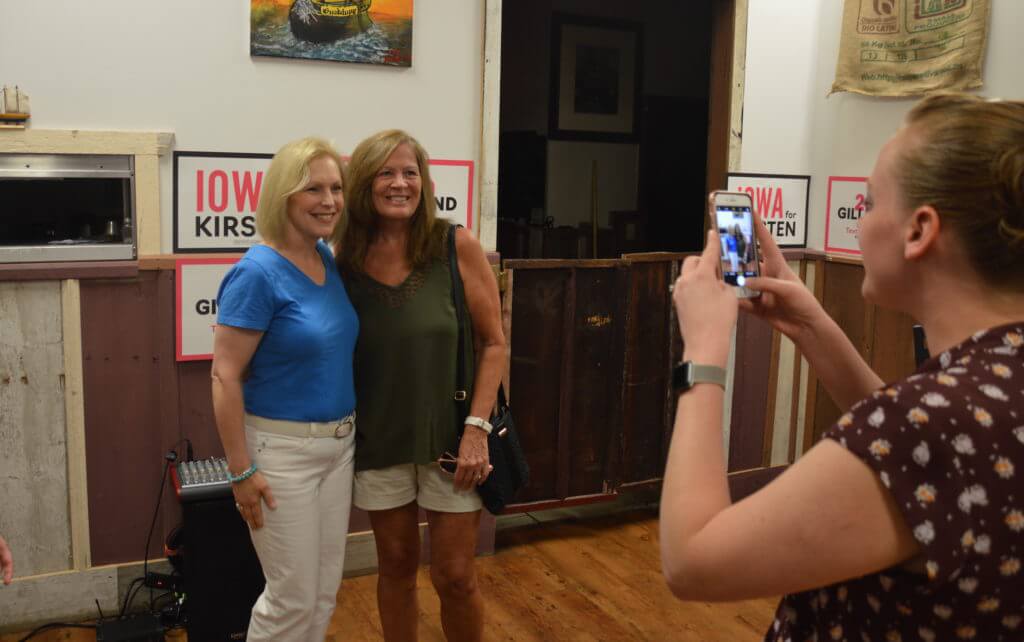 The New York senator was in particularly high spirits yesterday morning because the latest Monmouth Poll that just came out that morning put her at 2% in Iowa. That put her above much of the rest of the field stuck in the 1%s or below, but most importantly, it counted as a qualifying poll for her to get on the debate stage in September.

“I’m very excited about it, I feel like we have real momentum,” she told me in the RV later. “I think the second debate really gave me a good chance to talk about who I am, why I’m running … The more opportunity I get to talk about this vision and how I’m going to get things done, the more it will resonate with primary and caucus voters … Even though I’m not the front-runner or flavor of the month, I’m someone they trust and know can get things done.” 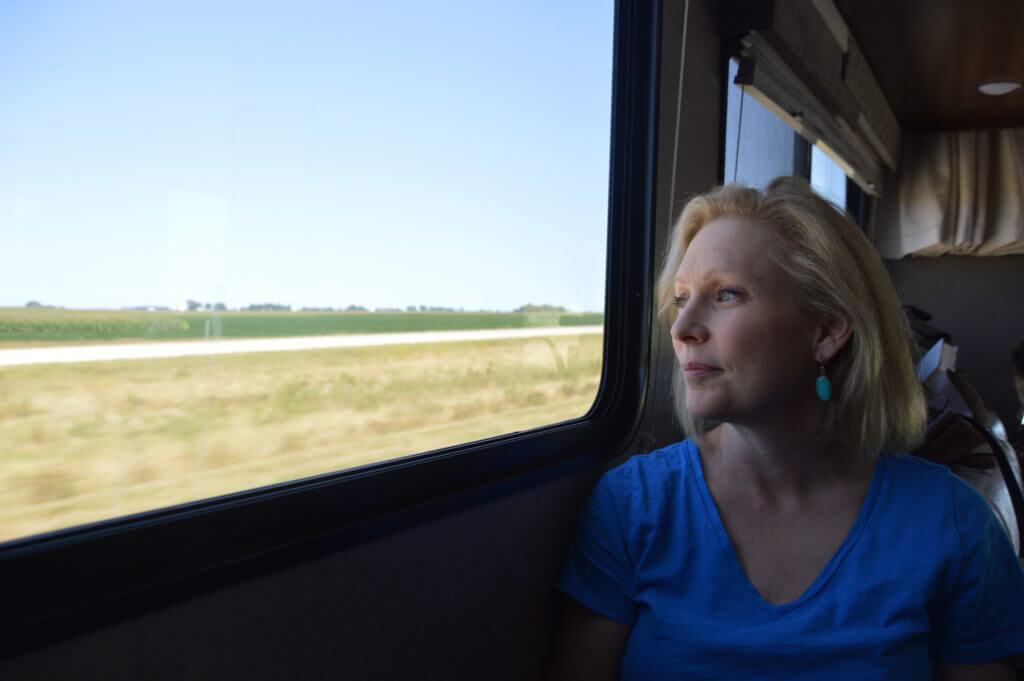 She added that it didn’t surprise her that the field of candidates had gotten so large, noting that Democrats had “never had a primary this diluted.”

“I did imagine you’d have this many candidates, and I did imagine it would take me all year,” Gillibrand said. “When I ran for Congress in that two-to-one Republican district, I was 20 points behind the whole race until really the month before the election, when I was five points out. It takes time.”

Gillibrand still needs to get to the 130,000 individual donor mark (she’s over 100,000 now), and she tried to finish that out one donor at a time, closing her Storm Lake remarks by asking each person in the room to donate $1.

“This summer, we really wanted to do another RV trip,” Gillibrand said. “Since Iowa is the home of the Winnebago, we wanted to do it here. But I’m a little sad that Theo isn’t here, he loved it.” 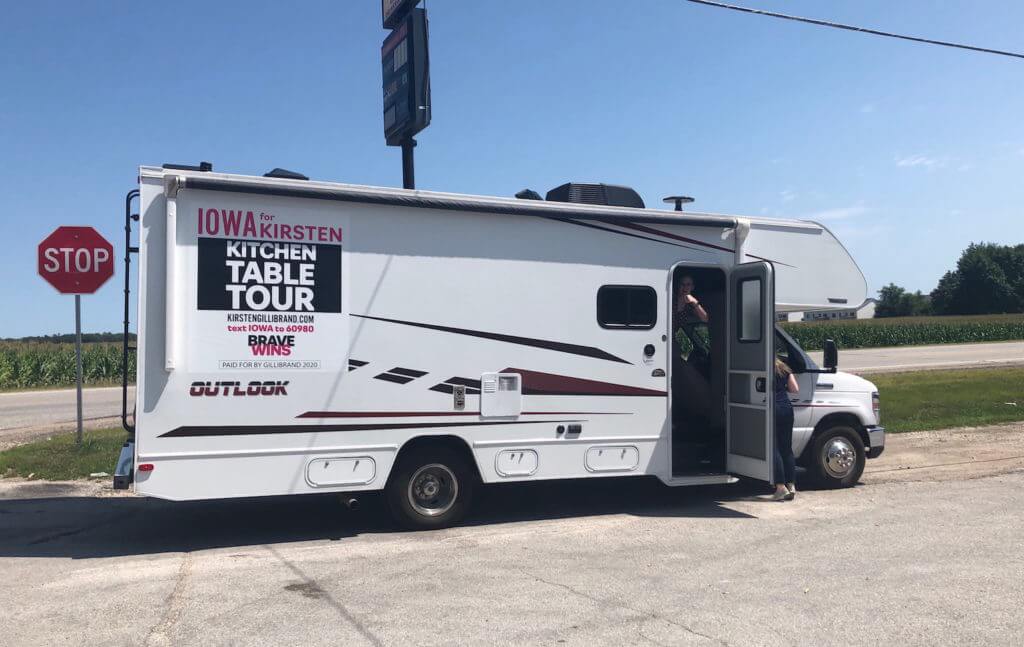 Her older son, Theo, is currently up on a canoeing trip in the Hudson Bay in Canada. Gillibrand showed me the little dot on her phone app that shows where he is; it’s a trip where they bring no phones and little technology save for a GPS tracker, which the concerned mother had mixed feelings on.

Her other son, meanwhile, helped run the show on board the RV.

“Henry’s been rocking our tunes on this particular ride,” Gillibrand explained.

The campaign RV itself was a nice, new model, and Gillibrand had stocked the fridge with vegetables and La Croix. She planned on making sides and shrimp for their Cedar Falls house party later that night, and Gillibrand was bringing all the food to cook for a BBQ in Decorah on Friday. 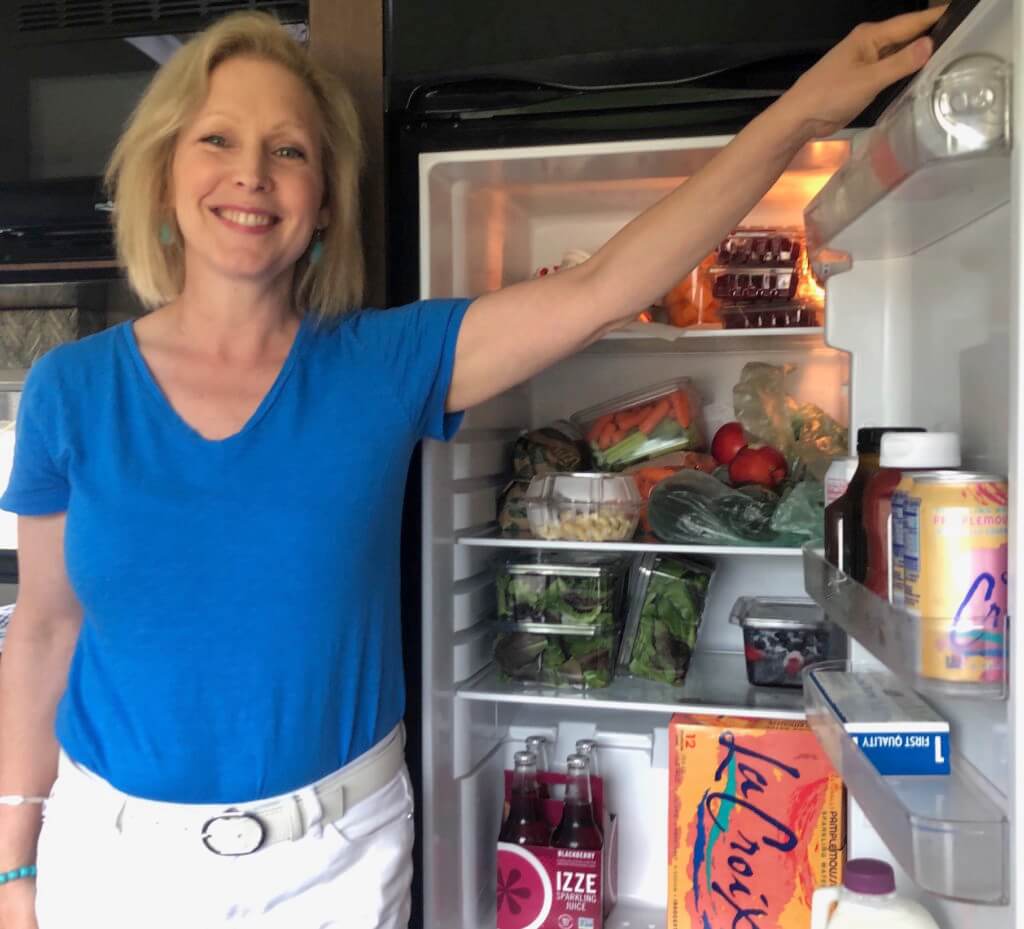 Gillibrand is set to attend the State Fair for the better part of Saturday afternoon, though she lamented she had nothing to enter in any competitions that year. She said that she and Henry will try some ice cream taste testing, while Jonathan would try out the craft beer tent.

The senator and I spoke for a bit for a later story, then just sat back and enjoyed the ride from Storm Lake across Highway 20. I also learned during our chat that Gillibrand used to be a wedding photographer, and she still seemed to have some good skills for when she borrowed my camera for a bit.

Some of her other campaign staffers passed by the RV in another car twice, getting some footage of the trip for their various social media feeds.

We eventually got just outside Fort Dodge, where I’m spending two days to see Elizabeth Warren, Steve Bullock and Kamala Harris. Fort Dodge is a little ways off of Highway 20, so I just asked to get dropped off at a random gas station at a small town outside it. Gillibrand insisted on coming in to make sure it was a safe place to wait for a local ride and to buy me some coffee. 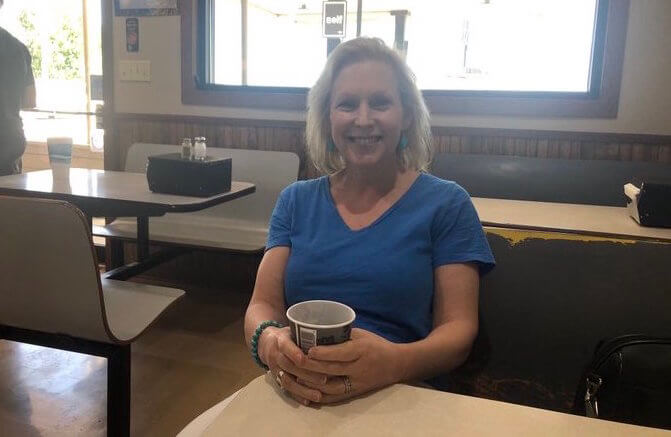 Catching Up With Elizabeth Warren 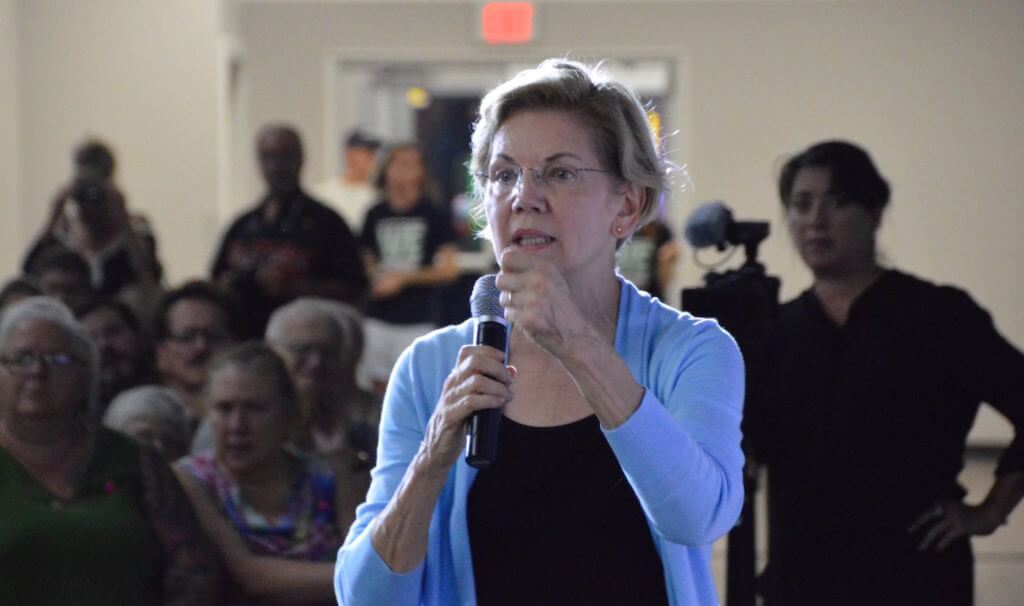 While I’d travelled around with Elizabeth Warren for quite a few trips earlier this year, it was a while since I’d seen the good senator from Massachusetts. She hasn’t been out in Iowa as much this summer, though she didn’t need to be — Warren dominated the Iowa Caucus scene in the early months of this year with non-stop visits.

Warren drew 350 people out to her Fort Dodge town hall forum, another impressive turnout that reinforced her status as one of the top contenders in the Iowa Caucus. Like many other Warren events I’ve been to, the audience was a wide mix of the Democratic Party: young, old, people of color, progressive activists and the county party rank-and-file. That last group, including many more moderate Democrats, isn’t often out at Bernie Sanders rallies, but they’re still interested in Warren. 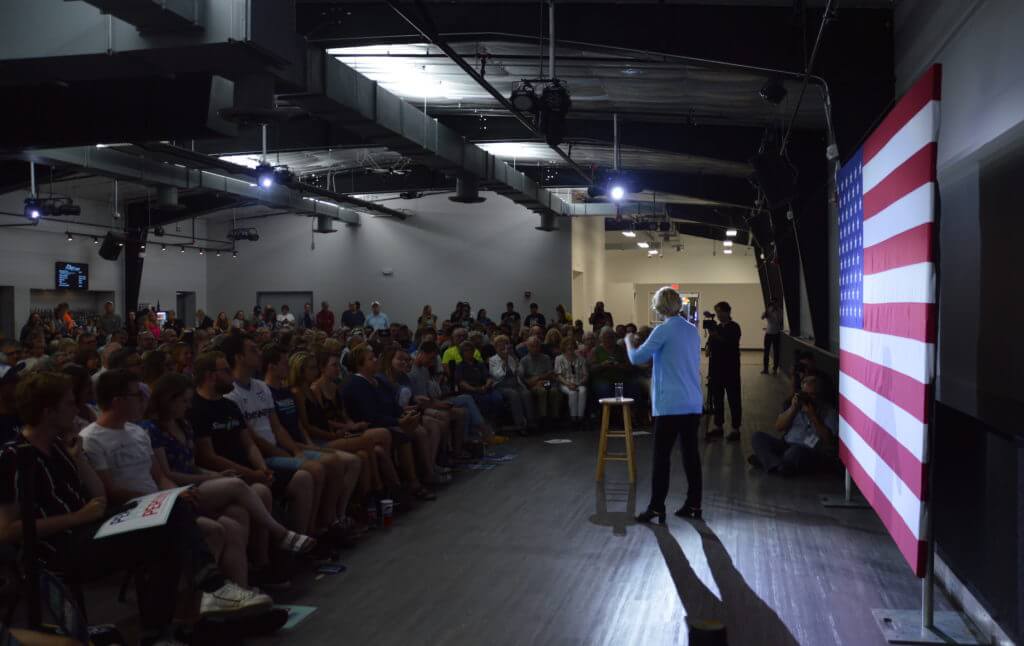 Warren introduced her son Alex, who I don’t believe had been out to Iowa on a trip before. She too had a RV for her Iowa journeys this week. Taking a cue from Warren’s well-organized Iowa ground game, it prominently displayed its own call-to-action. 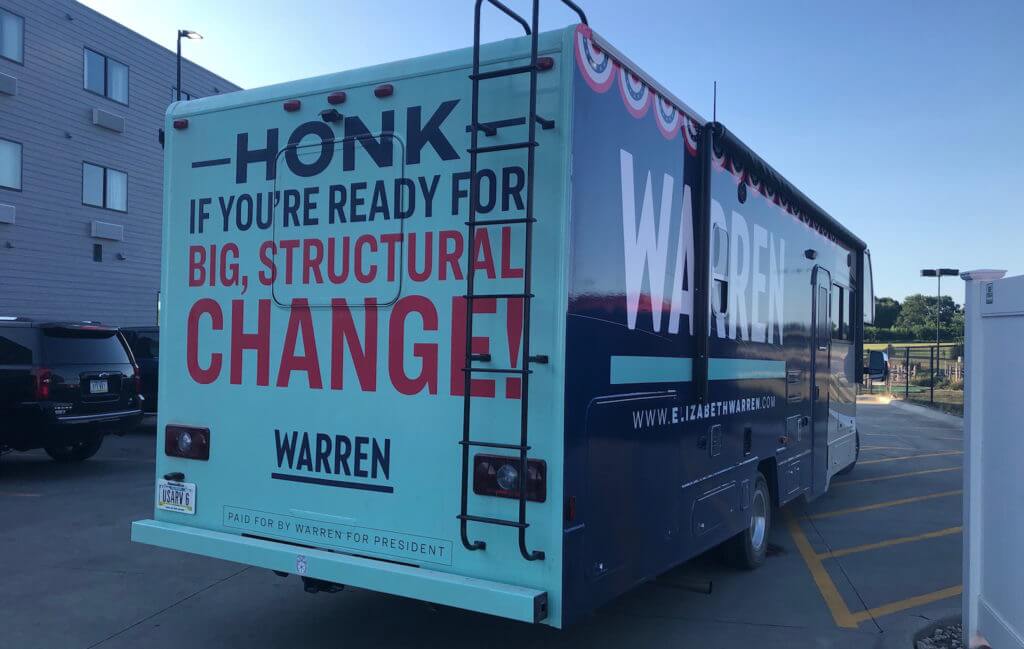 While Warren’s speech in Fort Dodge emphasized her expanded rural America policy plans, it was interesting to see how much of her stump remained unchanged from her initial foray into the state in January. For towns she hadn’t been to before, perhaps that still works, but it’s interesting in the larger narrative of the race. We’ll see what her Wing Ding speech is like.

There’s more to cover about Warren, but we’ve got that planned for a later story. I need to wrap up now as my ride to Bullock’s event in town is about to arrive. Harris gives me a lift up to Clear Lake tonight.

Check back in tomorrow for more.