It’s the first week of the Iowa State Fair, which means every single presidential candidate is flocking to Iowa. Even if you live outside Des Moines or Clear Lake, you may have chances to see four or five candidates around your hometown over just a few-day span.

Which got me thinking.

Could you literally just catch a ride with different candidates, jumping on and off their RVs, vans and busses at various stops and join up with the next one coming through town?

Turns out, the answer is yes.

So, from Wednesday to Friday, I’m hitchhiking with the campaigns across Iowa to see five candidates’ individual events, then I end up at the Wing Ding Dinner in Clear Lake, where almost the entire field will be.

I kicked off Wednesday morning a few miles from my house in West Des Moines with John Delaney, rode with him in his truck and RV up through Western Iowa, then caught a ride from Amy Klobuchar’s team in Spirit Lake, who dropped me off in Storm Lake for the night. Kirsten Gillibrand has an event there Thursday morning, then she’ll give me a ride to Fort Dodge where Elizabeth Warren holds an event that evening. Kamala Harris comes to Fort Dodge the next day, and she’ll then give me a lift to the Wing Ding Dinner in Clear Lake.

I actually don’t have a ride back to Des Moines from the Wing Ding set up yet, so if any other candidate wouldn’t mind a passenger on Friday night, let me know (I’ll just ride back with my reporters if not).

If nothing else, it saves on gas. Plus, it gives a fun look at life on the Iowa Caucus trail for the candidates.

Here’s my dispatch from day one.

No other candidate has logged as many miles in Iowa as former Congressman John Delaney, not by a long shot. It helps that he started two full years ago at this time in 2017. He’s currently in the midst of a six-day trip with over 30 stops.

For these extensive journeys, he has two main rides: a red 2014 Dodge Ram truck and a newly-commissioned Delaney RV from Idaho. Delaney bought the truck originally for his father several years ago, who then passed away three years back. Now he takes it out on the campaign trail as much as possible. 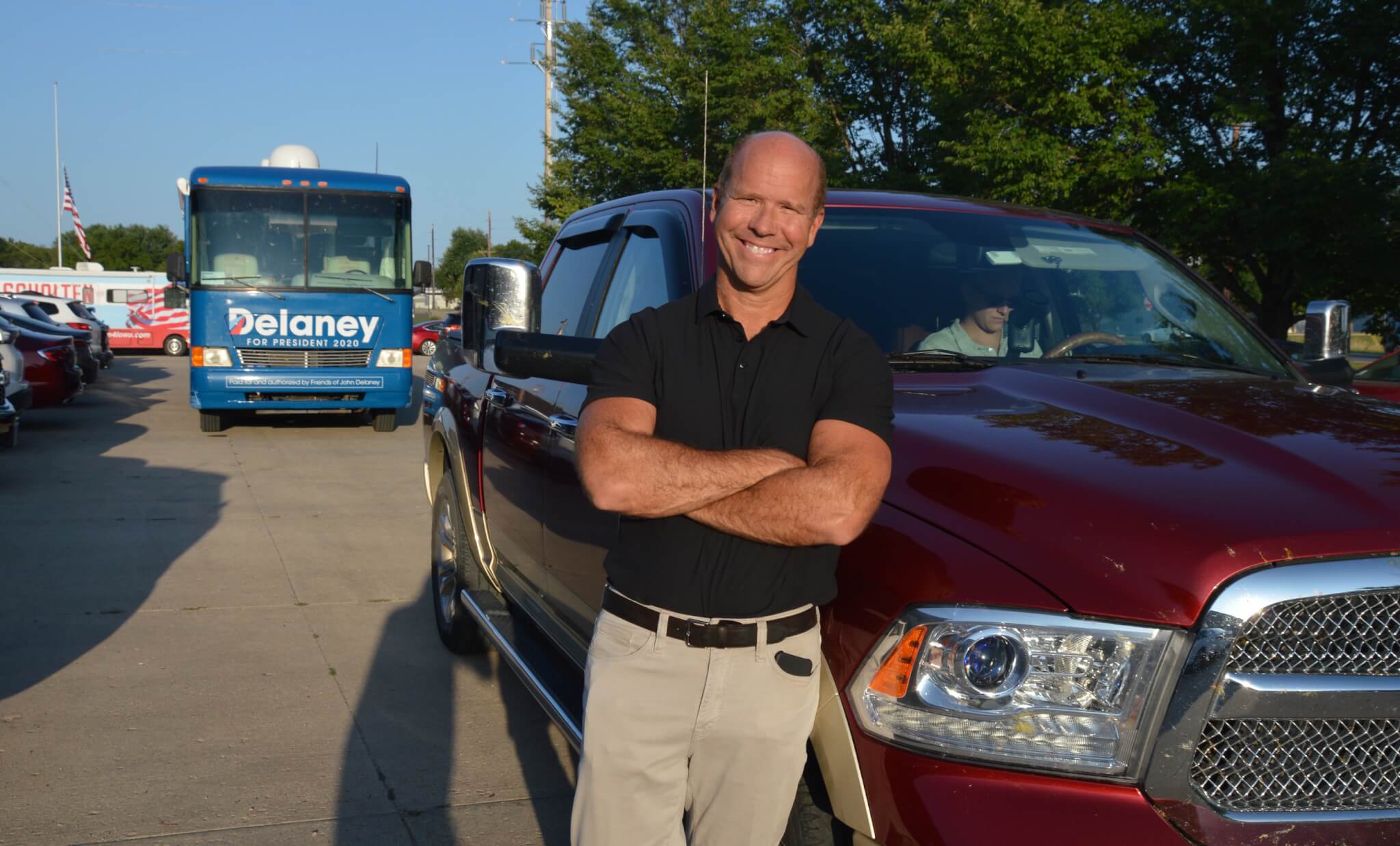 The RV comes from a dealer in Twin Falls, Idaho that Delaney’s wife April knew (she grew up in that state) and is a new purchase for the campaign. It was wrapped with the Delaney logos and driven out to Detroit for the debate, then made its way to Brent Roske’s West Des Moines house for parking in Iowa. Roske, Delaney’s new deputy state director, drives it on all of this trip. It’s a helpful announcement that the candidate is in town when the colorful RV rolls through main street, though Roske noted it’s confused his neighbors as to whether a presidential candidate moved into their block when it’s parked back at his home.

Delaney prefers to drive himself in the truck to most of his events with a staffer or two (or reporter) riding along.

I got dropped off by Mrs. Starting Line around 8:30 at Smash Park, a really fun sports and entertainment complex in West Des Moines that I don’t ever have time to actually visit outside of work.

Delaney’s first two stops of the days were low-key small business drop-bys and tours at Smash Park and The Foundry, where there’s a new whiskey distillery in West Des Moines.

The former CEO of some rather successful finance companies himself, Delaney enjoyed talking shop with the owners, and his questions sounded more like those of a potential investor than candidate.

“Your commercials look great, I’ve watched them quite a bit,” noted The Foundry Distillery’s owner as he showed Delaney around.

Sadly, it was a little too early in the morning to sample the distillery’s wares.

And Delaney also tried his hand at Pickle Ball at Smash Park’s courts, facing off against one of his traveling campaign staffers.

“You got to come up under it more, pop it up – it doesn’t have any spin,” Delaney remarked on the odd dynamics of a pickle ball. He stuck around on the court until he got the hang of it, walking off after hitting a good volley against his staffer. 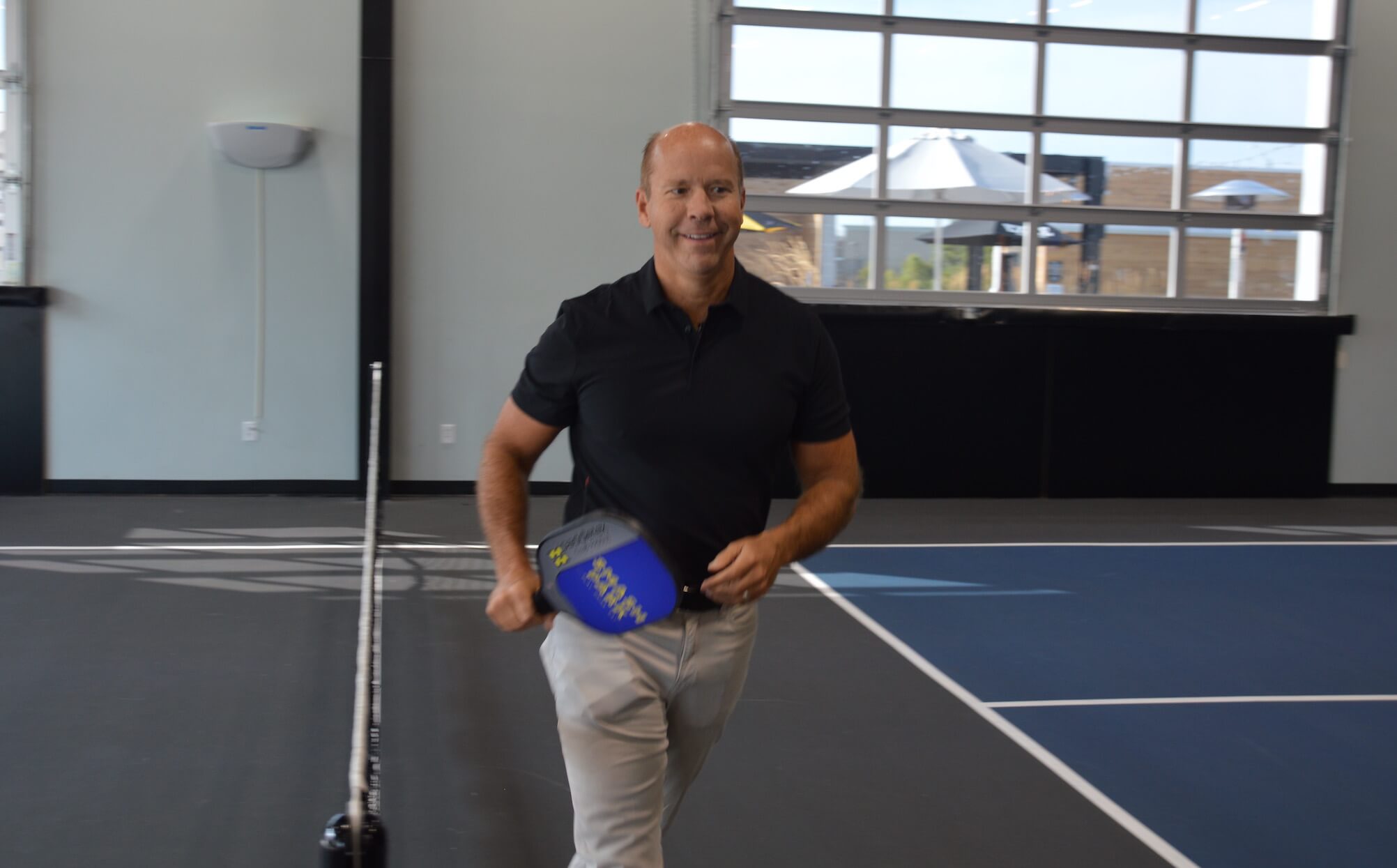 Though these events were simple business tours, you can always count on a strong contingent of Chinese exchange students at any Des Moines metro event, who were there to ask questions and get signatures. They ended the event with getting a photo with Delaney.

“Wait, what does it say?” Delaney questioned as he stood behind their banner. “People get in trouble for that, you know.” 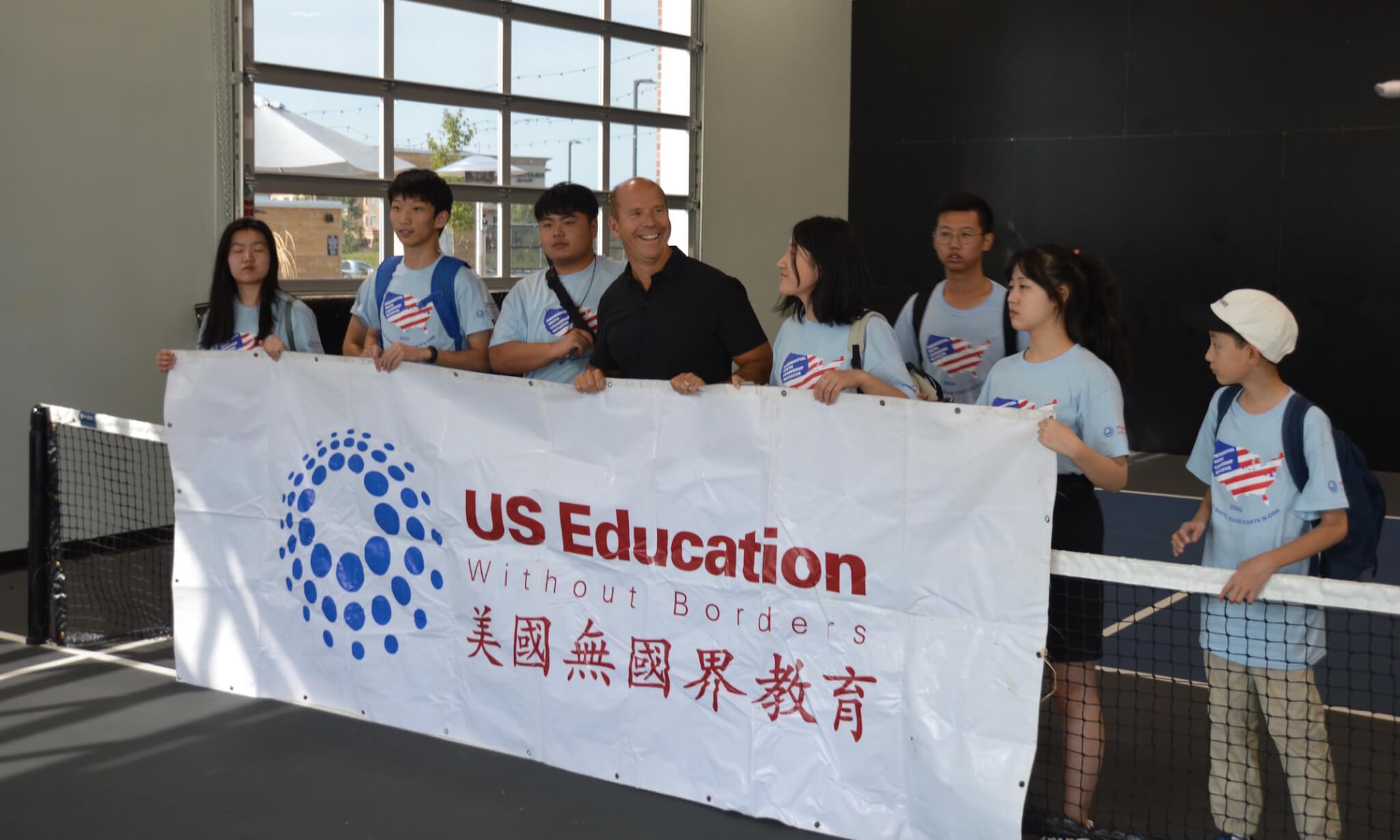 On the way to his next event in Coon Rapids, Delaney got an important question from the back seat from his state director, Monica Biddix.

“When’s the last time you bowled?” she asked. The owner of the bowling alley they were headed to wanted to know if she should turn the alley on.

And he did just fine, knocking down eight pins on his second frame. 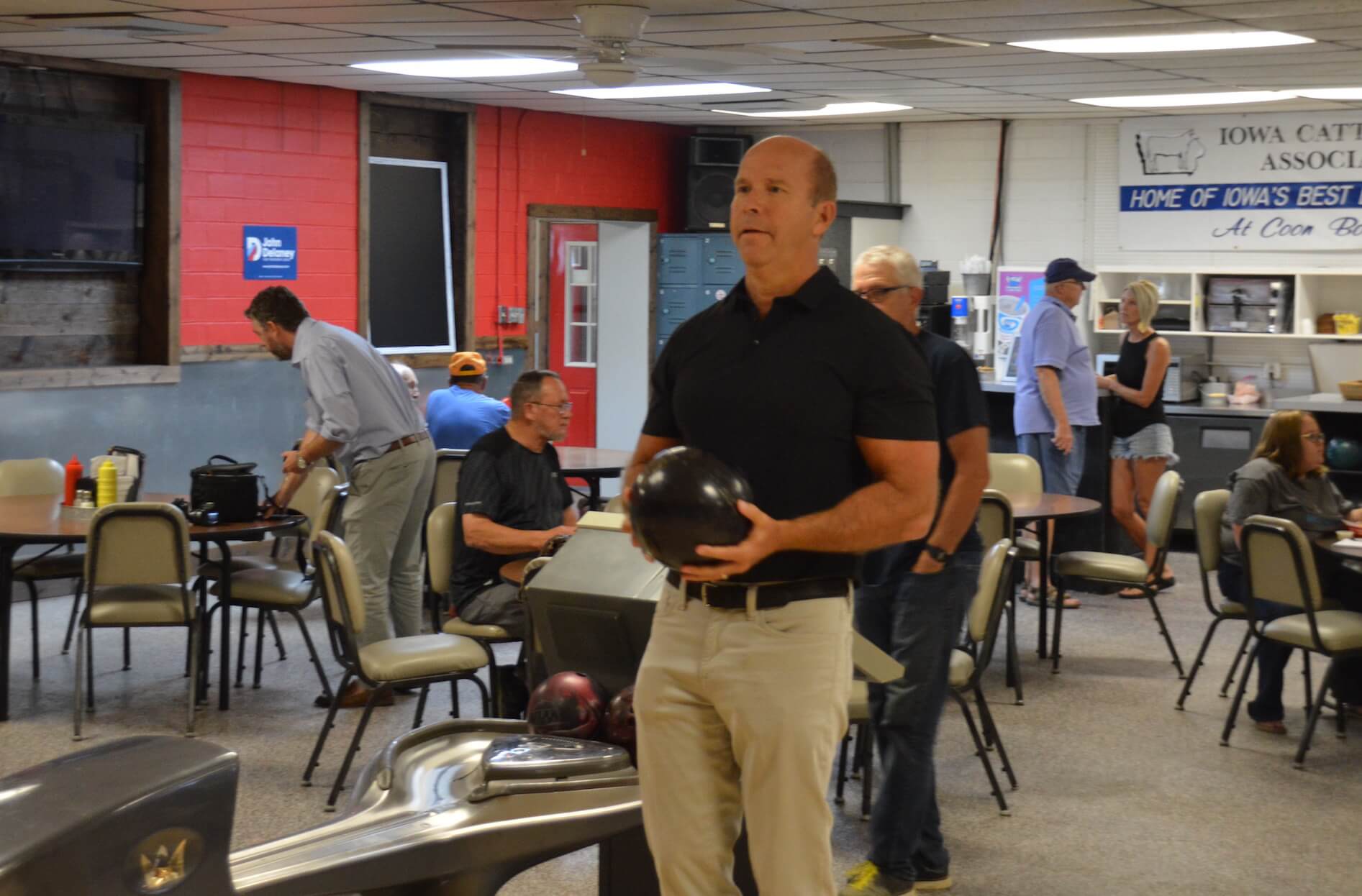 The Greene County Democrats were quite familiar with Delaney, however, who had been visiting them since a farm forum they held in 2017. The locals were so impressed with Delaney’s speech then — the county chair called it “almost poetry” — that they literally printed up his words on a banner that they take to every one of their events. 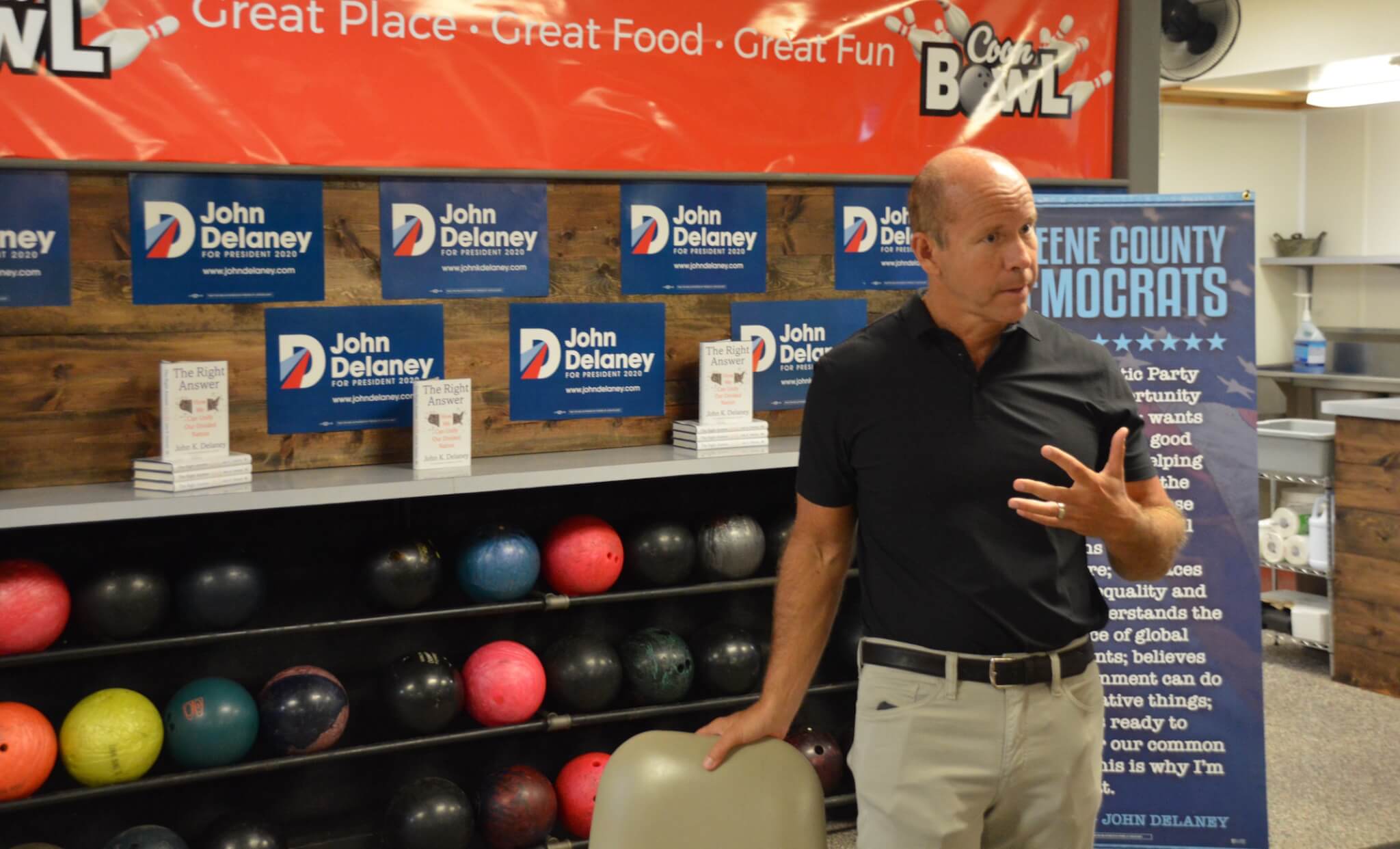 The reception wasn’t all supportive, though. Liz Garst, part of the Garst family that brought Nikita Khrushchev to the local farm in the 1950s, pressed Delaney on his backing of the Farm Bill and what it meant to sustainable agriculture.

A Bernie Sanders supporter pushed back on Delaney’s insistence that the Democratic nominee needs to support the Trans Pacific Partnership.

“You do realize that’s how Trump won, right?” he asked.

But Delaney stuck to his position, arguing that advocating for the TPP could help win over Republican farmers who have seen their livelihoods damaged by Trump’s trade wars. It was a position he’s increasingly making on the trail now, telling me for a later story that he feels like he’s already succeeded on moving the health care debate in the party and now wants to focus on the next topic.

Delaney kept chatting with the Sanders man well after the event was over, calmly explaining why he disagreed on a range of topics with the left-most candidates.

The candidate’s next stop was Sac City, where Delaney stopped to view the World’s Largest Popcorn Ball before dropping by the local community center, a place where he’d already held an event during his first 99-county tour (Delaney now calls that “The Full Delaney,” in joking reference to Chuck Grassley’s annual tour).

After that, Brent took me in the RV straight to Spirit Lake for the Dickinson County Democrats’ Summer Sizzler as Delaney made one other stop.

Between 400 and 500 Democrats from across Western and Northern Iowa gathered at the second-annual Summer Sizzler on Wednesday night. Attendees seemed grateful for the presence of several armed police and private security guards during a troubling week for the country.

While three presidential candidates were on hand that night — Delaney, Joe Sestak and Amy Klobuchar — the real hero of the evening was J.D. Scholten, who got a standing ovation just for walking in the room. He had announced his second bid against Steve King earlier this week. The presidential contenders wisely played to his popularity.

“Hello to the Democrats who are going to send J.D. Scholten to Congress!” Delaney said to garner some louder applause and cheers from the crowd as he took the stage.

Klobuchar slapped an “I heart J.D.” sticker upon her arrival, and huddled with Scholten for most of the time before her speech. 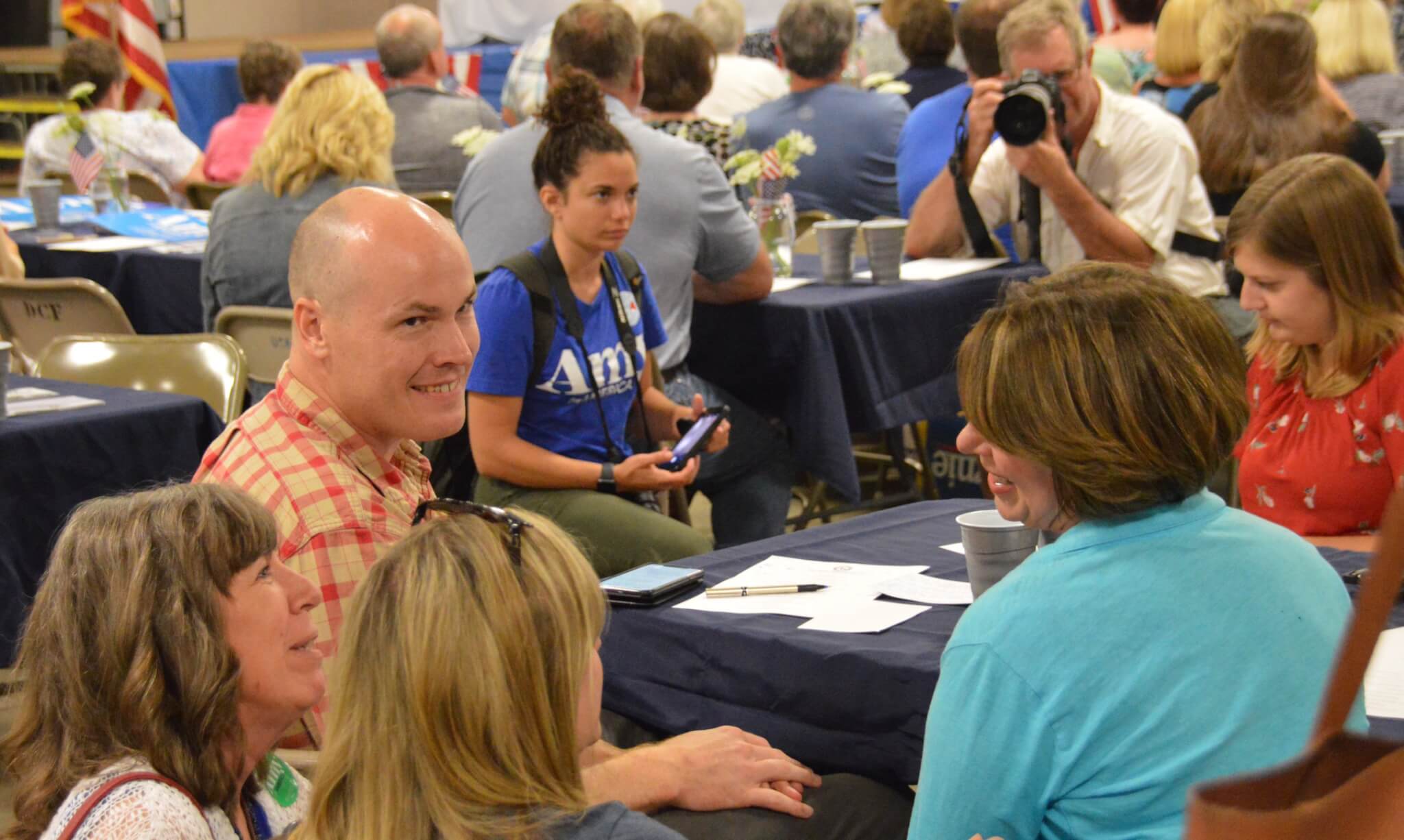 The Minnesota senator also got a beer in hand soon after arriving to the event. Much to her likely approval, it appeared to be about 98% beer and only 2% foam.

Klobuchar had spent most of the day on farms and at a wind turbine. Her campaign noted the owner of the wind farm’s name was Thomas Wind. She had been touting her new, extensive agriculture policy plan that she rolled out earlier this morning. Interestingly, while she commanded a strong press presence at her morning event in Ankeny, just a small handful of local reporters and Starting Line were on hand for the Sizzler.

“I feel like I’m on the debate stage, everyone’s so tall up here!” Klobuchar quipped once on stage and standing next to the rather tall county Democratic leaders who were MC’ing the event.

Always a fan of a good joke, Klobuchar shared one she heard that night from a former county party chair of Dickinson County, who hoped to turn the conservative county — and the surrounding ones — blue in 2020.

“Dickinson County won’t just be a blueberry in a sea of tomato soup,” she said was his plan. “I thought that was pretty good.”

While Delaney and Sestak largely kept to their stump speeches that evening, Klobuchar spoke a good deal about the recent domestic terrorist attacks and mass shootings.

“There is so much more that unifies us than divides us, despite what this president says … We are one America,” she told the crowd, then turned her attention to Trump’s past statements after the Charlottesville protests. “There are not two sides when there is white nationalism on the other side. There is only one side, and that is the American side.”

All three declared Democratic U.S. Senate candidates were on hand that night, as well, and so was Michael Franken, the retired admiral who’s likely to enter the race later, but those are all stories for another day. 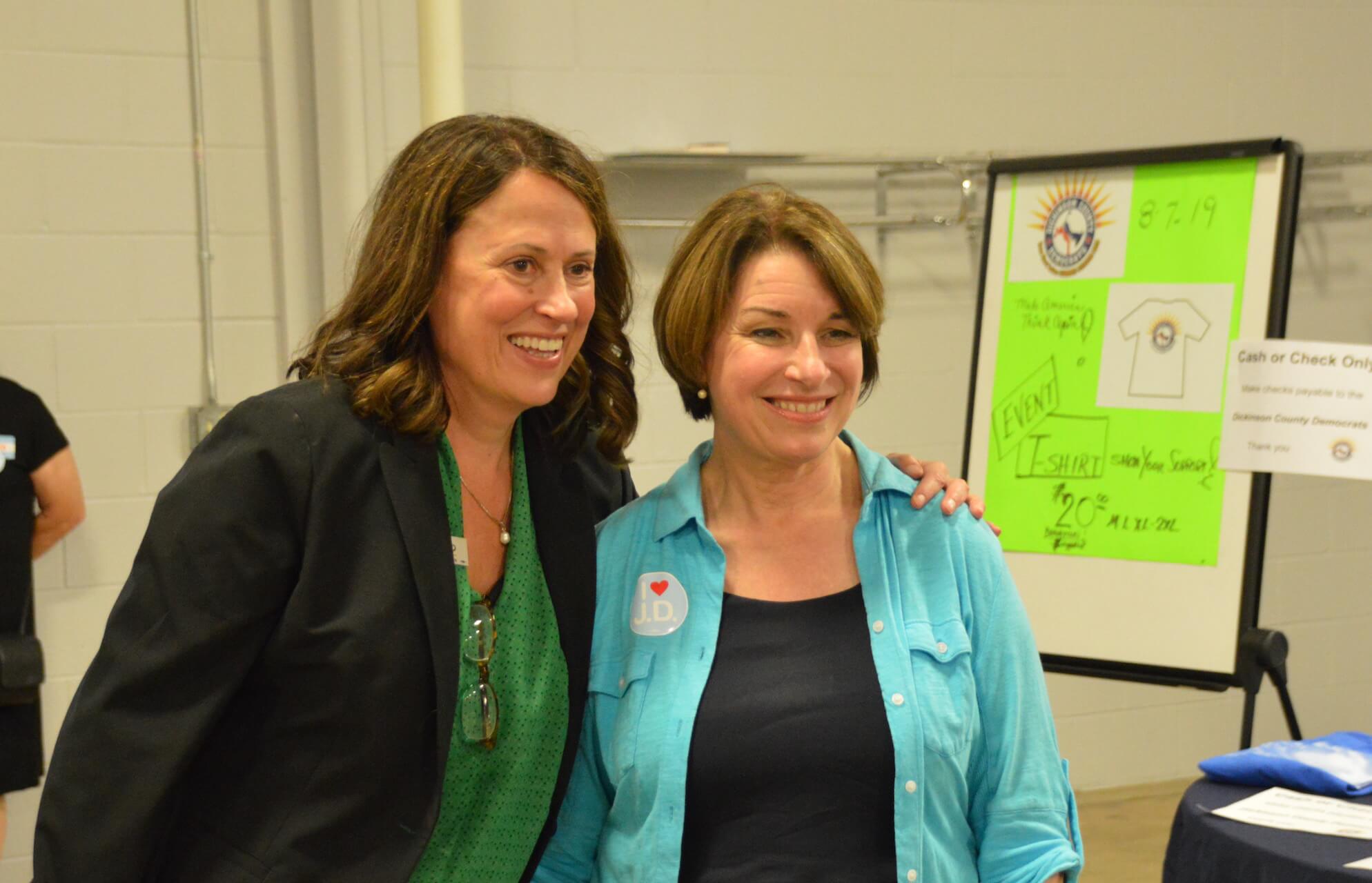 After a late dinner, the Klobuchar team dropped me off at the only Storm Lake hotel in walking distance of Gillibrand’s event Thursday morning (Klobuchar had an early 7:30 AM event in Webster City).

Check back here late tonight or early tomorrow morning for out next dispatch from the road.

1 Comment on "Hitchhiking With The Candidates: Day 1, Delaney And Klobuchar"