A new cog in the fundraising machine for Sen. Joni Ernst launched its voter outreach campaign this week with a digital advertising blitz and door-to-door canvassing.

The Iowa Values Super PAC said in a press release Thursday it “invested six-figures in a digital advertising campaign that will touch swing voters in all 99 counties.”

Ernst, Iowa’s junior U.S. senator, is seeking reelection for the first time in 2020.

The Democratic primary to unseat her is beginning to take shape, with operational campaigns from Theresa Greenfield, Eddie Mauro and Kimberly Graham. And on Wednesday, retired Navy Admiral Michael Franken told Starting Line he, too, was considering a run.

Iowa Values first filed with the Federal Election Commission in 2014, the year Ernst was elected to replace longtime Democratic Sen. Tom Harkin. They spent just under $100,000 that year.

FEC filings show the PAC’s last significant contributions came in 2014, the largest being a total of $75,000 from an individual Iowan. That cycle, Ronald Daniels of Buyers Realty in Des Moines contributed the bulk of the funding.

“We plan to knock 150,000 doors over the next six months, an immense mobilization effort that will showcase this organization’s commitment and resources,” said Derek Flowers, executive director of the Des Moines-based Iowa Values, in a statement. “Through out voter education efforts, we’re going to highlight the work Sen. Ernst has done to fight for Iowans and to combat wasteful government spending.”

Flowers served as Ernst’s campaign manager in 2014 for the primary.

Iowa Values’ first ad of the year, “We Are Iowans” will run on YouTube and Facebook, the press release stated, along with “display ads across the web.”

This web ad was seen in the middle of a Politico story the other day: 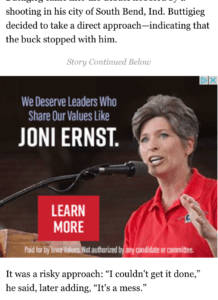 Though the press release explicitly stated its intention to help reelect Ernst, the Iowa Values website, ouriowavalues.com, describes the organization as a “nonprofit, nonpartisan forum.”

“While political progressives have a litany of strong public policy advocates in academia and the mainstream media, Iowa has few state-based, free-market organizations to bring conservative voices to policy discussions in Des Moines and across the state,” the website states. “Iowa Values was founded to help fill that void.”

In addition to the help of PACs like Iowa Values, Ernst also is raking in millions on her own. Her campaign in April reported raising $1.7 million in the first fundraising quarter of 2019, bringing her total cash-on-hand to $2.8 million.