Sen. Joni Ernst tied her love of motorcycle riding to a central theme of her 2020 reelection campaign for the U.S. Senate, which she kicked off at her annual Roast and Ride event on Saturday.

“I’m often asked what I love most about riding,” said Ernst to a room full of Republican supporters at the Central Iowa Expo in Boone. “And the answer, folks, is really simple: It’s the freedom.”

Those “freedoms,” Ernst and other top Republican speakers claimed, “are under attack” by Democrats.

“We can’t take our way of life for granted,” Ernst told her crowd. “The very values that make up the heart and the soul of our state and this beautiful country are under attack. All across Iowa, liberal Democrats running for president … are advocating for a socialist agenda.”

Ernst was joined at the Roast and Ride by Sen. Charles Grassley, Gov. Kim Reynolds, Nikki Haley, former Ambassador to the United Nations, and Jeff Kaufmann, chairman of the Republican Party of Iowa. All were adamant Ernst was in a strong position to win a second, six-year term.

A recent poll conducted by Public Policy Polling showed 49 percent of Iowa voters surveyed approved of Ernst’s work in the Senate, compared to the 40 percent who disapproved.

The Public Policy Polling results forecast a potential weakness for Ernst, however.

When squared against a generic Democratic candidate, Ernst’s lead shrunk to 48 percent support over a Democrat’s 44 percent.

In order for Ernst’s Democratic challenger to be successful in 2020, he or she will need to combat the senator’s fundraising prowess and high name recognition often enjoyed by incumbent candidates.

In April, Ernst’s Federal Election Commission filing showed she raised $1.7 million in the first quarter and had $2.8 million in cash-on-hand. According to a news release issued by her campaign, those numbers reflected the largest first-quarter fundraising totals in an off-year election in Iowa.

Ultimately, Ernst made clear Saturday she will run her campaign on asking voters whether they want to be represented in Washington by a “socialist” Democrat or conservative Republican. 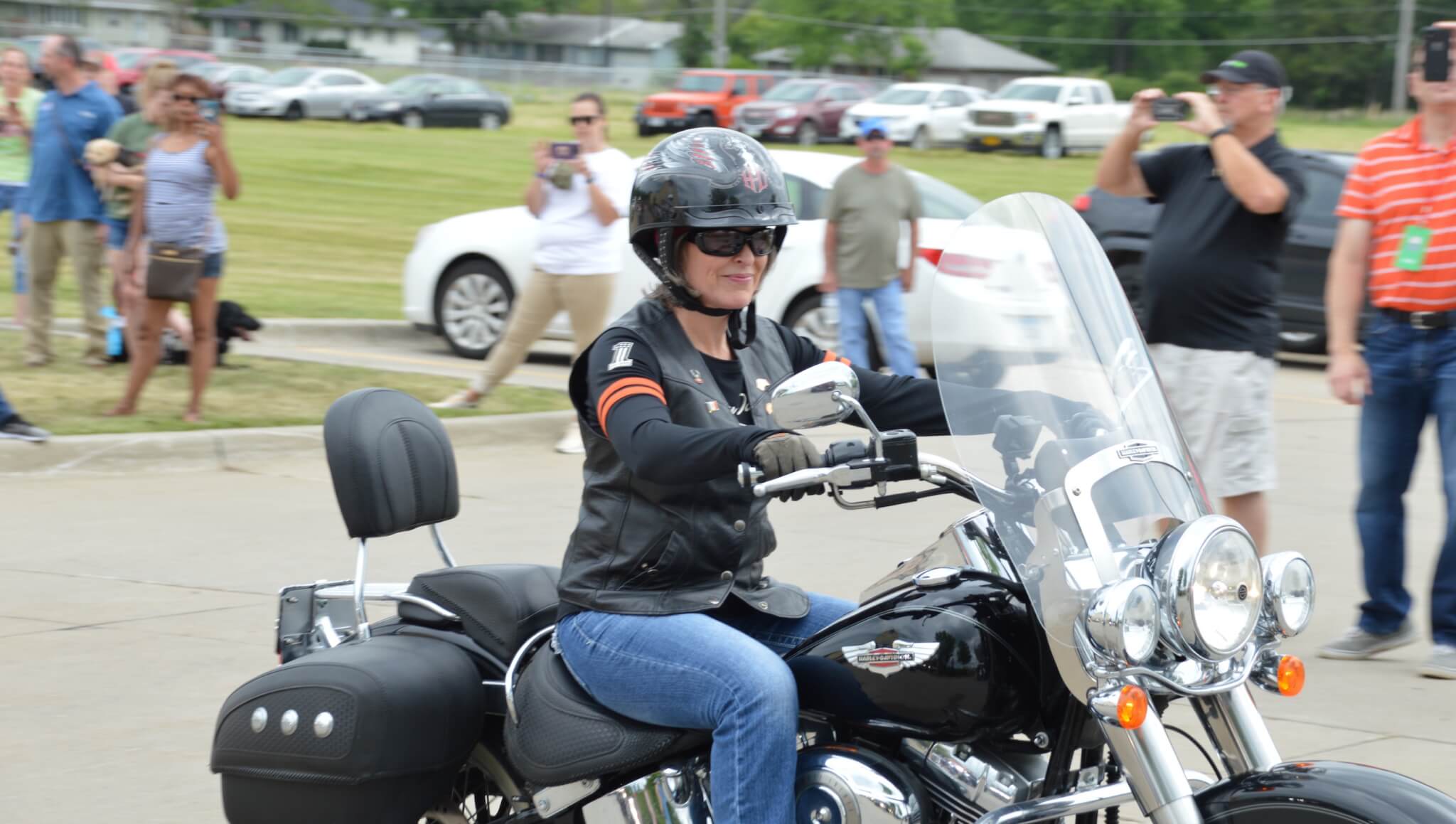 Here are the issues Ernst will leverage on the campaign trail, along with key quotes from her announcement speech on Saturday:

A Fight Against ‘Socialism’

“Today as I kick off this campaign, I ask you to join me on this mission to stamp out socialism and protect the important balance between government responsibility and individual liberty. It is that liberty that makes our democracy the greatest nation mankind has ever known.”

Each of the Roast and Ride speakers directed a portion of their remarks Saturday to the threat posed by “liberals, radicals and socialists,” as Democrats were described by Haley.

“The stakes are really high in this election,” said the former U.N. ambassador. “You can count on Joni to do her part.”

Reynolds, elected to her first full term in 2018, said Democrats in the House and Senate were “focused on impeachment and investigation. How many jobs do you think that that’s actually going to create?”

Ernst asked the crowd if she could “count on your help to stop” Democrats from winning election.

“Make no mistake, the forces of the radical, socialist left are on the march all across our state and across our nation,” Ernst said. “We must, we must do our part to defeat them. Our freedoms are quite literally under attack, because the radical left will stop at nothing until socialism has spread from coast to coast.”

“President Trump and Senate Republicans have gotten to work delivering on some very critical promises to the American people, like confirming judges who will follow the Constitution … and making sure that they do not legislate from the bench.”

One of Republicans’ proudest accomplishments in the Trump era was the addition of two conservative justices to the Supreme Court.

Ernst and others speaking Saturday made sure to highlight the importance of keeping the GOP in control of the courts.

“He [President Trump] has appointed conservatives to the Supreme Court,” said Grassley, former chairman of the Senate Judiciary Committee. “People who are going to interpret the Constitution according to original intent.”

Ernst voted in favor of confirming both of Trump’s nominees, Neil Gorsuch and Brett Kavanaugh.

“I understand the threats we face and have the judgement and the know-how to keep America safe and strong.”

As the crowd was often reminded, Ernst is the first female combat veteran elected to the U.S. Senate. And as such, she has taken an interest in military issues while in Congress, ranging from sexual assault to services for veterans and increased security at the U.S.-Mexico border.

“I know it is so important, and this president has made it known, that we need to continue to advocate for increased border security to keep our Iowa communities and the rest of the United States safe from harm,” Ernst said.

“Here in Iowa, we know that we feed and fuel the world, which is why I have fought tirelessly in Washington to keep markets open for Iowa exports.”

As President Trump continues to squeeze the farming economy with tariffs on China and threats to impose them on Mexico, Ernst said she has kept “the importance of the rural economy” at the forefront of her work in Congress.

“In addition to my efforts to ensure a level playing field for our farmers when it comes to trade, I have also successfully fought to eliminate Obama’s WOTUS rule, which would have regulated 97% of Iowa’s land,” she said.

Ernst has talked often about the WOTUS (Waters of the United States) rule during her time in the Senate, using it as an example of federal government overreach. The policy was put in place by former president Barack Obama’s Environmental Protection Agency to broaden the category of waterways under federal jurisdiction.

The senator said she “defended” the Renewable Fuel Standard against attempts in Congress to repeal it, and “succeeded in my efforts to secure E-15 year-round.” 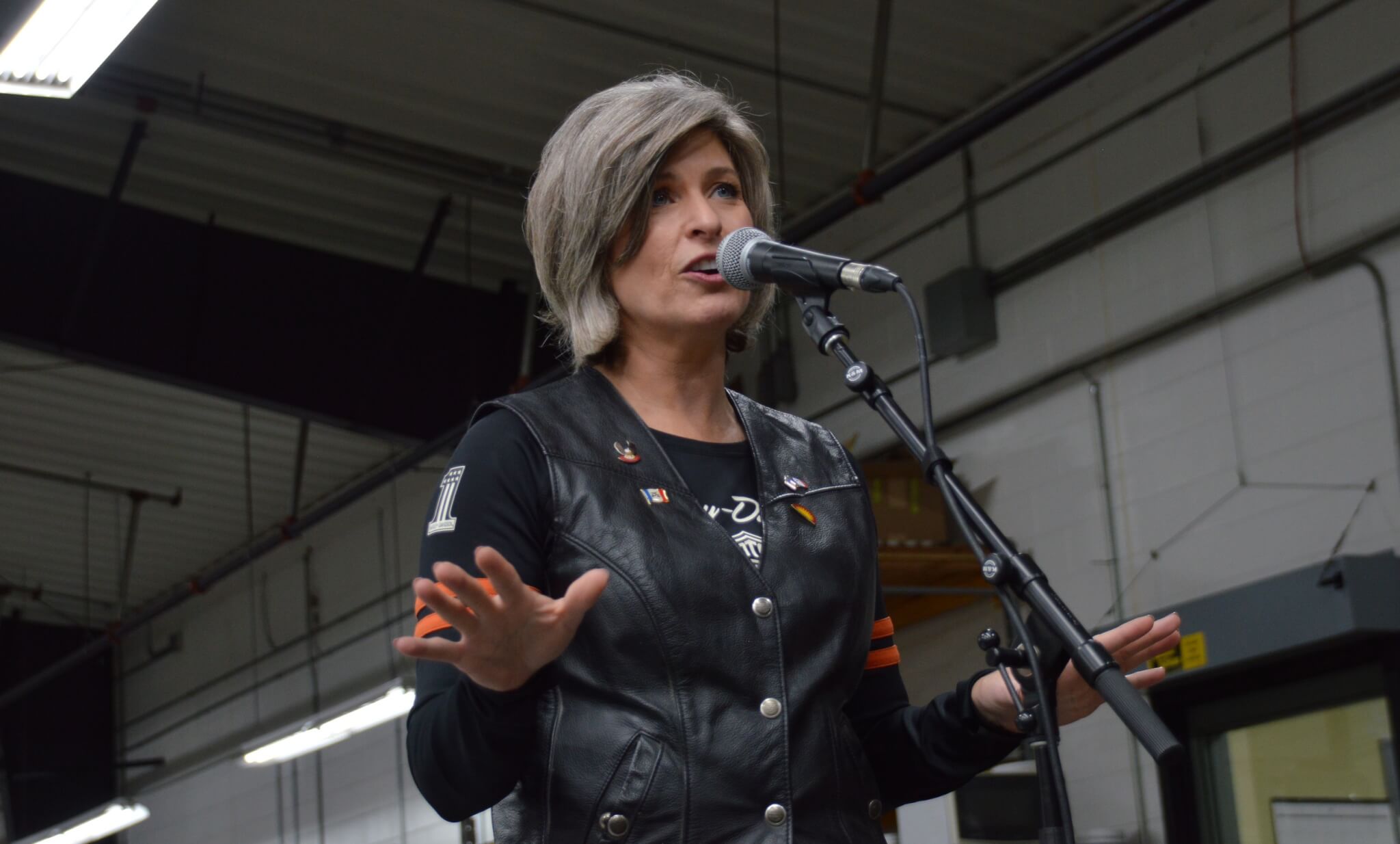 “In today’s world where past presidents are getting Netflix deals and podcast deals and major speaking fees, I hardly think that it makes sense for taxpayers to have to finance their lives.”

Other than the senator’s two bills to keep financial perks for lawmakers and past presidents in check, specific policy accomplishments were largely absent from her speech.

Early in her remarks, Ernst discussed a bill to “slash” the financial assistance presidents receive when they leave the White House. The bipartisan bill passed the House and Senate before Obama vetoed it at the end of his second term, she said.

Her legislation, the SQUEAL Act, to end the tax break lawmakers are eligible for while living in D.C., was signed into law.

“These [Democratic] presidential hopefuls, they love to talk about government-run health care, what they don’t like to talk about is its price tag — $32 trillion. Not to mention that quality of care will go down, while the wait times go up.”

In keeping with Republicans’ theme of attacking “the radical left,” Ernst accused Democrats of advocating for “government-run health care” without a plan to fund it responsibly.

Though Ernst, Grassley, Reynolds and Haley all spoke out against providing health insurance for every American, no one proposed a solution to covering the uninsured, except for Ernst to say she was “working to identify solutions for affordable, quality health care for Iowans.”