The Twitter-verse has not taken kindly to Iowa Sen. Joni Ernst’s rallying cry that socialists soon will take over Iowa and the United States if they’re not stopped by Republican voters.

Fear of the “radical left” was a central theme of her 2020 campaign kick-off earlier this month, with Ernst telling the Roast and Ride crowd that “the forces of the radical, socialist left are on the march across the our state and across our nation.”

Since the June 15 event, Iowa’s junior U.S. senator has kept the hype alive on social media, much to the ire of her detractors. 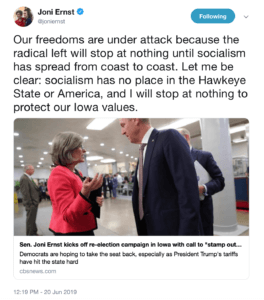 The statement has garnered 12,000 replies and counting, many of which decry Ernst’s hyperbolic language.

“Makes you wonder what they label the gov’t subsidies and the Farm Bailout money some farmers are receiving,” wrote ‘Terri.’ 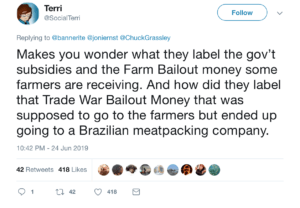 ‘Devin Nunes’ cow’ jumped in on conversations on farm subsidies, as did Twitter user Brian Wilde, asking Ernst, “Aren’t your farmers receiving massive sums of government money? You do know what socialism is, right?” 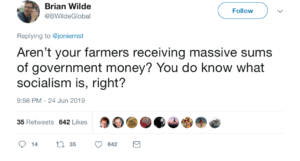 Her critics pointed to the numerous social benefits Republicans are willing to support, calling them on their hypocrisy now that “socialism” is a tag they stick on every Democratic candidate.

“Why is it bad socialism when my taxes pay for things I need: healthcare, education, green energy,” asked ‘CloseTheCamps,’ “but capitalism and [sic] good when it pays for things the GOP want like subsidies for oil companies and tax cuts for already wealthy billionaires?” 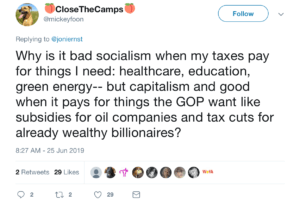