It would be hard to call Senator Elizabeth Warren’s well-attended and well-organized inaugural trip to Iowa as anything other than a very successful introduction to Iowa Caucus-goers. A little under 3,000 people showed up to see Warren pitch her biography, policy priorities and vision for America across Iowa. For almost all those at her events, it was their first time seeing the 2020 contender in person.

But what was particularly interesting from Warren’s visit was just who was in that crowd and what that might tell us about Warren’s chances, Democrats’ enthusiasm as a whole, and the progressive lane of the primary.

Intrigued and excited Democrats crammed into event spaces in Council Bluffs, Sioux City, Storm Lake, Des Moines and Ankeny. They came from a diverse range of ideological backgrounds within the party and level of activist involvement. Starting Line found about equal numbers of past Hillary Clinton and Bernie Sanders supporters, as well as some folks who had never attended a political event before.

“I look around, it’s a lot of everybody,” Jeremey Dumkrieger, chair of the Woodbury County Democrats, said of the Sioux City event. “I see people who are at every central committee meeting and people who I’ve never seen before. She seems to be drawing both the old guard and the people who are interested in changing things. It’s a big mixture of both Sanders and Clinton supporters.”

The same was true at the Des Moines event.

“I see a lot of people I met with the Bernie campaign and a lot of people I know from other campaigns,” noted Jason Frerichs, a top activist for Sanders’ 2016 run and former chair of the state party’s Progressive Caucus. “It’ll be a hodgepodge. I think she’s going to bring in a lot of younger Hillary people.” 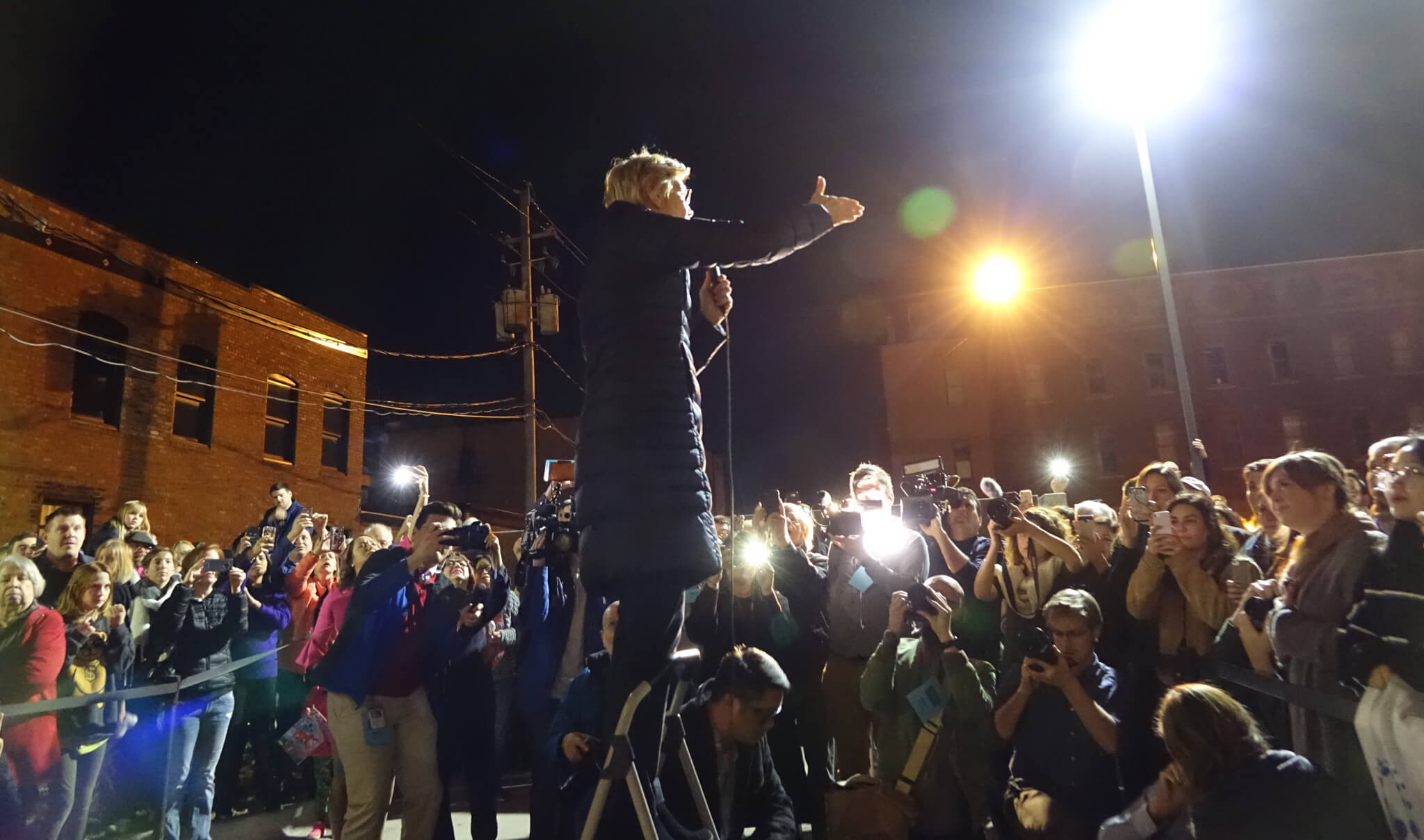 Some of the turnout was simply because Warren was the first major candidate to announce. If for nothing else, the huge crowds and long lines that snaked around city blocks demonstrated just how motivated Democrats were for the 2020 presidential race to get underway (and their desire to oust Trump).

That brought out some skeptical attendees who simply wanted to see Warren up close. Bev Calvert, a former Clinton supporter who attended the Sioux City event, said she was looking for more of a “middle-of-the-road candidate” who wasn’t “far-far-left” and wasn’t sold yet on the Massachusetts senator. Still, she was actively considering Warren, though she was particularly interested in Amy Klobuchar. Some attendees at the other events had similar ideological concerns.

That, though, is the benefit of being one of the first candidates in the race: you get to make your case in person to very large audiences, even to those skeptics. By the time the tenth or fifteenth person jumps in the race and makes their first Iowa stop, activists might only be attending the events of candidates who they’re seriously considering in their top three.

But there was also many Democrats out this weekend – from all political backgrounds – that already had Warren in their top tier of candidates.

“I’ve been following Warren for years. I’ve been hoping for the past five years that she’d run,” said Syd McCoy, a Sioux City teacher who caucused for Sanders but noted that the “socialism tag” on Sanders worried some of her Western Iowa friends. “I think Elizabeth Warren is a good in-between between Hillary and Bernie … She brings a new light to that, maybe Bernie was too far one way. She’s relatable and she’s female.” 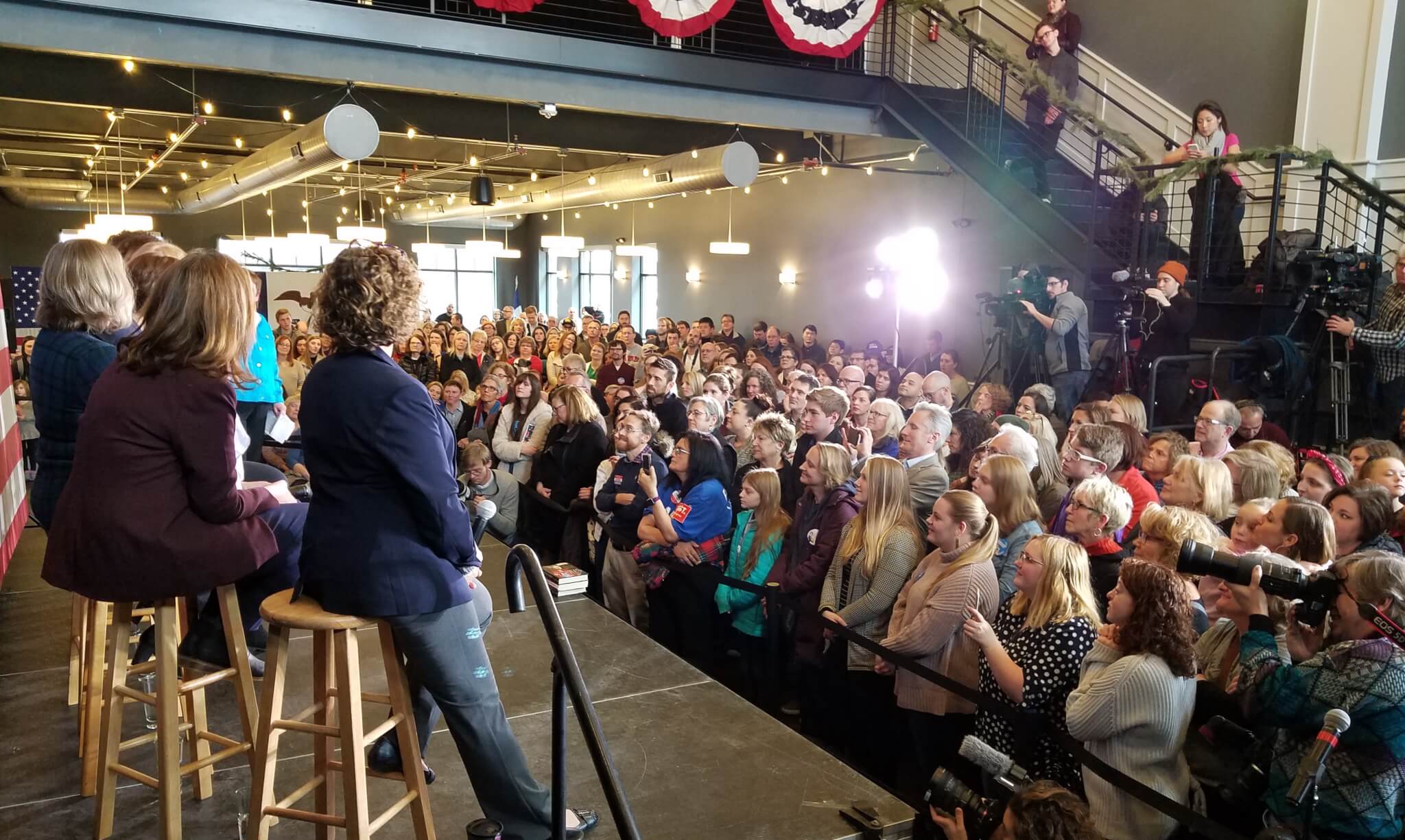 Many attendees noted their preference to nominating a woman in 2020.

“I don’t want just another white male,” said Caitlin Thompson-Smith of Ankeny, who preferred Clinton in 2016. “Having a woman or a person of color, we can get different perspectives and they can reach out to demographics that we need support from.”

Robyn Robbins, a former Sanders caucus-goer who drove in for the Ankeny event from Durant in Eastern Iowa, agreed.

“The main piece for me is supporting the more progressive part of the Democratic agenda,” she said. “I think she brings a change from the old established white guy to some new blood. Some new perspectives, being a woman she definitely has had different experiences.”

Robbins added that she would prefer a new candidate this time around. That thought was shared by a couple other former Sanders backers.

“Bernie’s too old,” commented Brenda Olverking of Sioux City, who caucused for Sanders in 2016 but likes Warren and Sherrod Brown this year.

“Well, she’s no spring chicken” chimed in her friend.

“No, but she’s not as old as Bernie,” Olverking replied. “I considered Bernie last time, but not this time. He had his chance.” That’s what offers some of the best news for Warren’s chances in Iowa. Part of the Sanders coalition may look to her as the new progressive choice, whether because they prefer how she frames the left’s cause, because they want a woman, or just because they want someone new. But Warren also appears to draw from a broader pool of potential support within the party – or at least she has a better chance of winning them over.

Some of that is simply due to a changing party, in part thanks to Sanders’ own success.

“She folds in a lot of the ideas that Sanders brought forward. Some of those ideas have become more mainstream. That’s why this is appealing to so many people,” noted Rick Mullin of Sioux City. But Warren also presented herself in a way that’s likely more familiar to some party regulars than Sanders’ hour-long, policy-heavy rallies. Her pitch began with a biography-heavy focus, explaining how her father’s heart attack threw their family into an economic tailspin, and how her mother had to take a minimum-wage job to save their house.

“At night, I’d go to bed, my parents would tuck me in, and then they’d talk and I’d learn words like ‘mortgage’ and ‘foreclosure,'” Warren said at her events. “It’s the story of a lot of working families.” 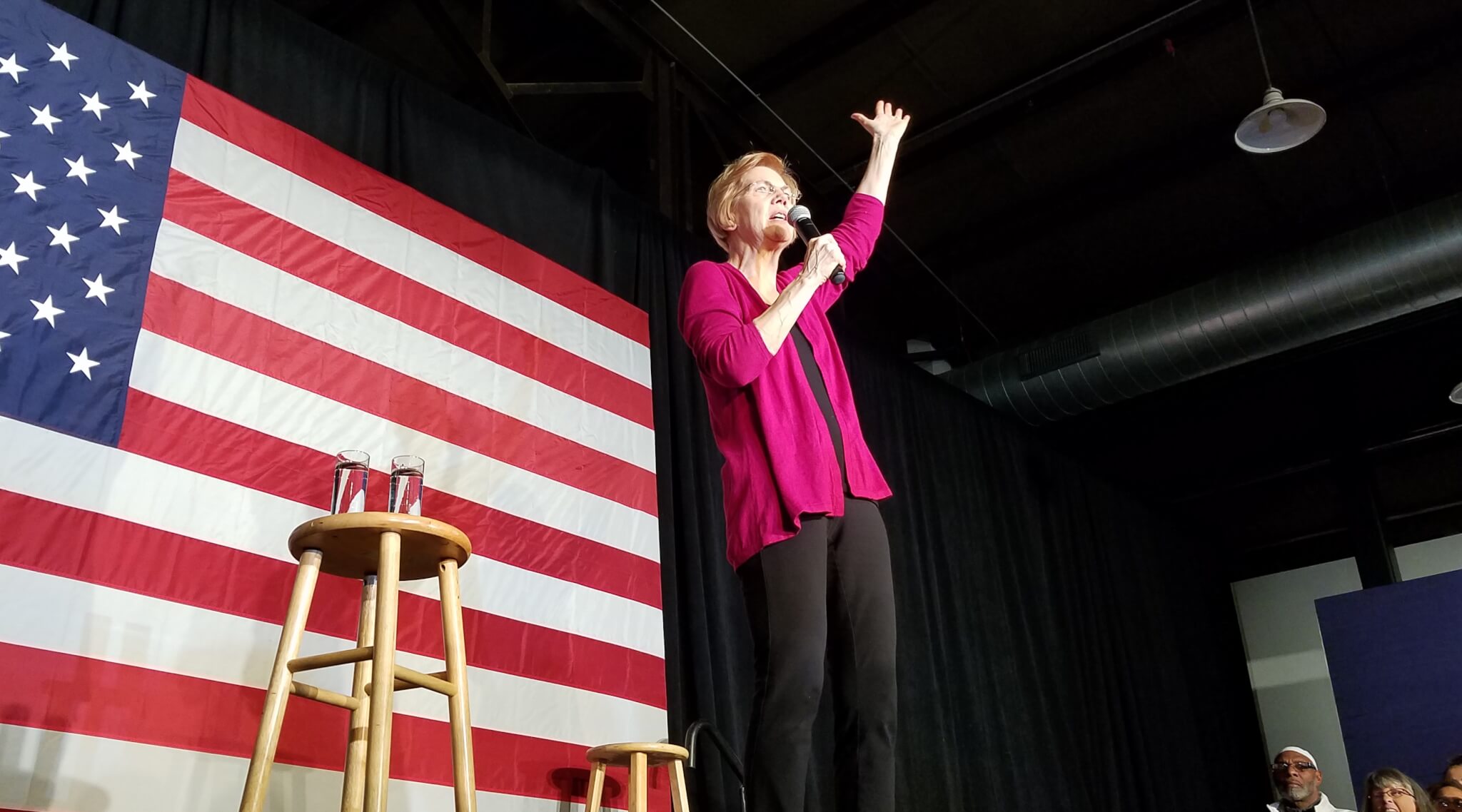 Warren wove a personal narrative into many of her policy points, and she would drive broad policy challenges down to individual stories of Americans suffering from healthcare costs or student loan debt. And she still framed her vision in the bold, far-reaching change that the progressive wing of the party desires.

That connected with some.

“I think she brings a lot of empathy in the way she presents in her speaking,” said a young woman named Elsie in Sioux City, who caucused for Sanders. “She appeals to me in that way. She hits you right in the heart.”

Warren also emphasized struggles that people of color face in America, even in her Western Iowa events where about 99% of the audience was white. That focus may help her better compete for the party’s diverse base of voters in Iowa and especially southern and western states.

Her Ankeny event was also noteworthy for who it included. Warren shared a stage with five recently-elected Democratic legislators from the Des Moines metro area. Sanders didn’t get a single public endorsement from a state legislator in 2016, and only had a handful of local elected officials that campaigned with him. These women weren’t backing Warren, just participating in a discussion panel with her, but it offered up an image that would be familiar and welcoming to longtime party activists. While Sanders took pride in being the outsider (and was successful at essentially building an entire political operation in Iowa from scratch), Warren is demonstrating that she’s very much a part of the party and its leaders. That may be a more palatable option for some Democratic caucus-goers.

Still, Sanders himself proved he retains a lot of his original support and excitement during a campaign swing he did in late 2018 that covered the same area of the state that Warren just hit. He drew crowds comparable to Warren’s trip in Sioux City and Fort Dodge, and drew over 1,000 to an Ames rally with J.D. Scholten. Those events drew a much larger percentage of the ideological left and younger crowd than Warren’s did – his old base, essentially.

While making predictions about this huge Democratic field is difficult, this situation could easily play out in the early stages: Sanders begins the caucus with a larger base of loyal supporters, while Warren has a better chance of selling a progressive candidacy to a broader slice of the party.

There’s no guarantee, of course, that Warren capitalizes on that (and anyone – Sanders especially – could win the caucus with 20% in a fractured field), but this initial tour suggested that a significant part of the party is open to Warren and her progressive candidacy.