Bernie Sanders got the band back together at his rally in Sioux City for Steve King opponent J.D. Scholten yesterday evening. A crowd of 500 people, many of whom caucused for Sanders three years ago, packed an auditorium at Morningside College to hear the senator’s familiar lines about economic inequality and universal healthcare.

At this rally, however, Sanders’ message was urgent and simple: put aside any frustrations you have with politics and just go vote.

“I think that what J.D.’s election is all about is voter turnout,” Sanders said. “And I believe that if working people and young people and people of good conscious go out to the polls in large numbers, J.D. is going to be the next congressman from the fourth.”

Sanders ticked off a litany of promises that Donald Trump made during the 2016 campaign and then broken, pointing to Scholten, a former baseball player, as the Democrat who could end up flipping the U.S. House.

“We need people in Congress who are going to stand up to the pathological liar that is the President of the United States,” Sanders said to a cheering crowd.

The Sioux City visit was the first of three events that Sanders is holding for Scholten throughout the 4th District. Rather than just a quick, in-and-out media hit and rally, Sanders is spending the better part of the third weekend before Election Day activating voters in King country. They travel next to Fort Dodge for a Sunday morning roundtable on seniors before their major rally in Ames on ISU’s campus this afternoon.

Sanders has ramped up his campaign travel across the country in recent weeks, stumping for candidates who share his support of progressive priorities. That’s included many visits like these to the conservative 4th District, helping in races that lie outside the list of top battleground contests this year.

Scholten has attracted national attention and local enthusiasm for his outside-the-box campaign against Iowa’s most notorious member of Congress. He’s outraised King $1,422,926 to $670,529 so far this cycle. Certain political realities still remain, including the daunting 70,000 registered voter advantage Republicans have over Democrats in the district.

Scholten has made retail politicking a key part of his candidacy, visiting all 39 counties in the spread-out district three times now. He travels (and often sleeps) on his campaign RV nicknamed the “Sioux City Sue.”

“I’m probably the only congressional candidate in America who sleeps more in a Walmart parking lot in his RV than his own bed,” he joked. 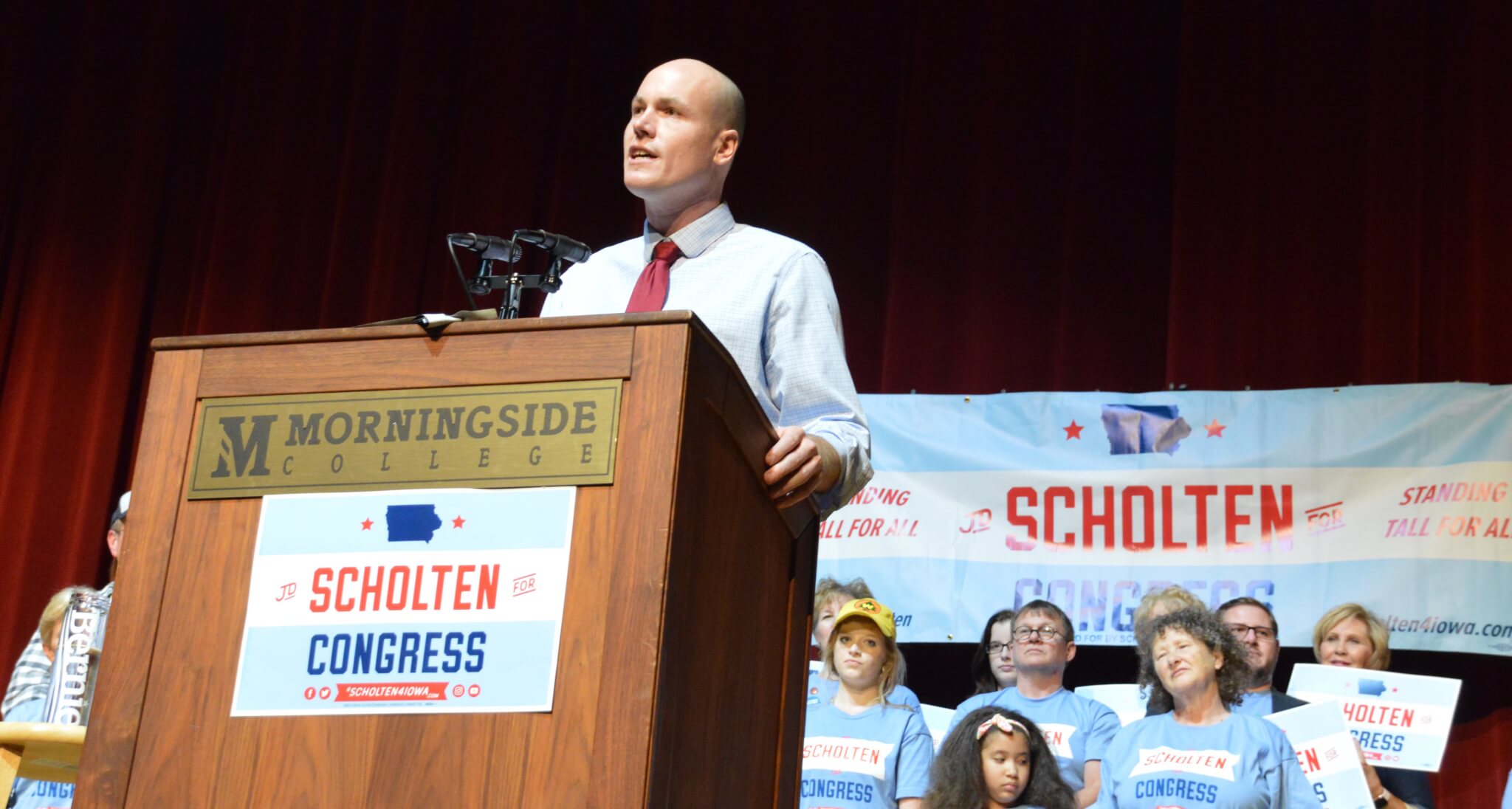 Scholten himself has been unafraid to run in deep-red Northwest Iowa while promising to support a wide range of very progressive policies. He’s for a $15/hour minimum wage and Medicare-for-all, and most notably he’s forcefully pushed back against King’s immigration stances, running specifically on a more welcoming and fair immigration system. He even began part of his speech in Spanish, encouraging Hispanic voters to get out to vote.

That’s a big part of what brought Sanders out to help. And Scholten reaffirmed some of those stances with Sanders standing nearby.

“My health insurance was often praying at night,” Scholten explained of his baseball-playing days. “I’m out here looking for solutions. I think the senator might have one.”

Still, a lot of Scholten’s campaign messaging has been focused on jobs, healthcare affordability, trade and simply showing up for voters. His TV ad that began running recently highlights his life as a baseball player, his return home to Iowa and how he’s been extensively traveling the 4th District, in contrast to King’s more aloof approach to constituency outreach.

And Sanders touched on a number of issues that Democrats everywhere have been running on this year. He mentioned Mitch McConnell’s comments from a few days ago about how Republicans may take aim at entitlement programs.

“Does everybody understand what Republicans mean when they talk about entitlement reform?” Sanders asked. “Those are cuts, devastating cuts to Social Security, Medicare and Medicaid.”

Sanders has been out to Iowa three times since 2016 before this current trip. With a host of other potential 2020 Democrats making the journey to Iowa in recent weeks, the former 2016 candidate’s visit has obviously drawn some national interest and speculation about his future plans. He did recap his performance in the last Iowa Caucus, as well as explain how many of the ideas he campaigned on at the time have since gained much more widespread support.

Bringing out Sanders to the most-conservative district in Iowa is an interesting choice. On the one hand, Scholten needs independents and Republicans who are fed up with King’s antics to consider backing a Democrat. King already took to Twitter to attack Sanders’ “socialism,” and some of those voters may be hesitant to go all the way in voting for a Democrat who aligns with Sanders.

On the other hand, like every Democratic candidate, Scholten also needs strong turnout from the part of the Democratic base that doesn’t typically show up in midterms. There’s no better messenger than Sanders to activate that younger, progressive base of voters who aren’t always too excited about the Democratic Party.

Last night’s rally was one of the larger ones this year for a Democratic event in Iowa. Helping turn out a couple hundred extra votes in Sioux City and Ames, especially if it’s the kind of voters few other politicians can reach, could be a very nice benefit to Scholten and the entire Democratic ticket.

And for Scholten, it certainly seems like a safe, cautious approach to his underdog bid won’t quite cut it against an incumbent who has stymied Democrats’ hopes in the past. May as well embrace the message you’ve waned to run on.

Scholten has had a busy several weeks getting boosts from well-known national Democrats. Senator Cory Booker rode on Scholten’s RV and joined him for a packed mid-day event in Boone two weeks ago.

3 Comments on "Bernie Sanders Rallies The Base With J.D. Scholten"