A new poll came out around 11 p.m. that showed Scholten down only a single point to Steve King. It sent him and his team into a flurry of late-night activity, readying a new fundraising push and spreading the news.

The next day didn’t slow down any.

Tuesday saw more donors publicly abandon King, and Congressman Steve Stivers, the chair of the National Republican Congressional Committee, admonishing King on Twitter for promoting “white supremacy.” The NRCC later confirmed they would not help in any way in King’s race. The controversy spread to the governor’s race, where Fred Hubbell called on Governor Kim Reynolds once again to remove King as her campaign co-chair. And the Cook Political Report moved the race from “Likely Republican” to “Lean Republican.”

Scholten held a press conference on Tuesday morning and fielded calls from CNN on his drives in between campaign stops. By the end of the day, he had five national press interviews scheduled between Tuesday night and Wednesday morning.

“It’s been completely nuts,” Scholten said while driving his campaign RV, nicknamed the Sioux City Sue, between Denison and Carroll, Iowa. “A lot of press have reached out to us, people we reached out to for 15 months. And, who knows, maybe the DCCC will return our phone calls at this point.”

It all comes on the heels of a series of damaging press reports that have suddenly caused some to wonder whether King’s reelection effort is in doubt. While King is no stranger to constant controversy, something has felt different about the latest round of news.

There was the story that King had used funds from a Holocaust memorial group for travel to Europe during which he met with a far-right Austrian political party with roots in Neo-Nazism. His decision to endorse a white nationalist in the Toronto mayoral race was bizarre, even by King’s standards. On the more traditional politician scandal front, another report showed he blew taxpayer money at ritzy D.C. restaurants.

But the mass killing at the Pittsburgh synagogue drew renewed scrutiny and condemnation for King’s repeated promotion of white supremacists and far-right European nationalists, as well as his past comments attacking the value of diversity in American culture.

In past years, King has withstood such flare-ups, handily winning reelection in his deep-red Western Iowa-based congressional district. But a number of factors are making Iowa politics watchers rethink that.

The elimination of straight-ticket voting in Iowa (pushed for and signed into law by Republicans) is a major wild card.

“With straight-ticket being off the ballot this year, it’s going to get in people’s heads that they have to actively vote for Steve King,” Scholten explained.

For King to lose, a lot of Republicans would have to defect. Registered Republicans outnumber registered Democrats in Iowa’s 4th District by 190,274 to 120,023, while there’s another 172,404 registered as No Party. There are some signs that people have had enough.

“Even my Republican friends just can’t vote for him,” said Denison Mayor Jarad Beymer, who saw Scholten walking through the town’s main street. “When I try to get people to move to our community, they see, oh, you’ve got Steve King there … It’s made it hard on us.”

Barbara Johnson, a registered nurse who lives on a farm near Kimballton, Iowa (population 322), hears frustration over King in rural Iowa. She came out to see Scholten at his brief stop at a restaurant in Harlan.

“I was in the coffee shop in Audubon the other day, and half the women were Republican, but there was a general consensus that no one liked Steve King,” Johnson said. “It’s an embarrassment the things that he says.

“I’m surprised at the number of J.D. Scholten signs I see in Elk Horn,” she added. “Elk Horn is known as a pretty conservative area. Usually there’s only two Democratic signs in the whole town, but this year they’re all over.”

Still, there’s been plenty of chatter about local misgivings on King before. But Democrats here point to Scholten, a former baseball player and first-time candidate, as the type of challenger that has connected with voters in a way other Democratic opponents have not.

“I think J.D. is the most serious candidate we’ve ever had to run against Steve King,” said Ellen Walsh-Rosmann, a restaurant owner who lives outside of Harlan. “He’s got a fabulous ground game, he’s been to Shelby County four or five times now.”

Scholten has employed an extensive retail politicking strategy in his race, calling one of his recent 39-county tours (he’s completed three of them) the “Can’t Fake Showing Up Tour.” Central to that has been the campaign’s bright, red-and-blue Winnebago that Scholten himself often drives, drawing eyes and well-wishes whenever it pulls into a small town. On Tuesday, several people stopped by the parked “Sioux City Sue” to say they had already voted for Scholten. Several truckers flashed thumbs-up to him on the road. 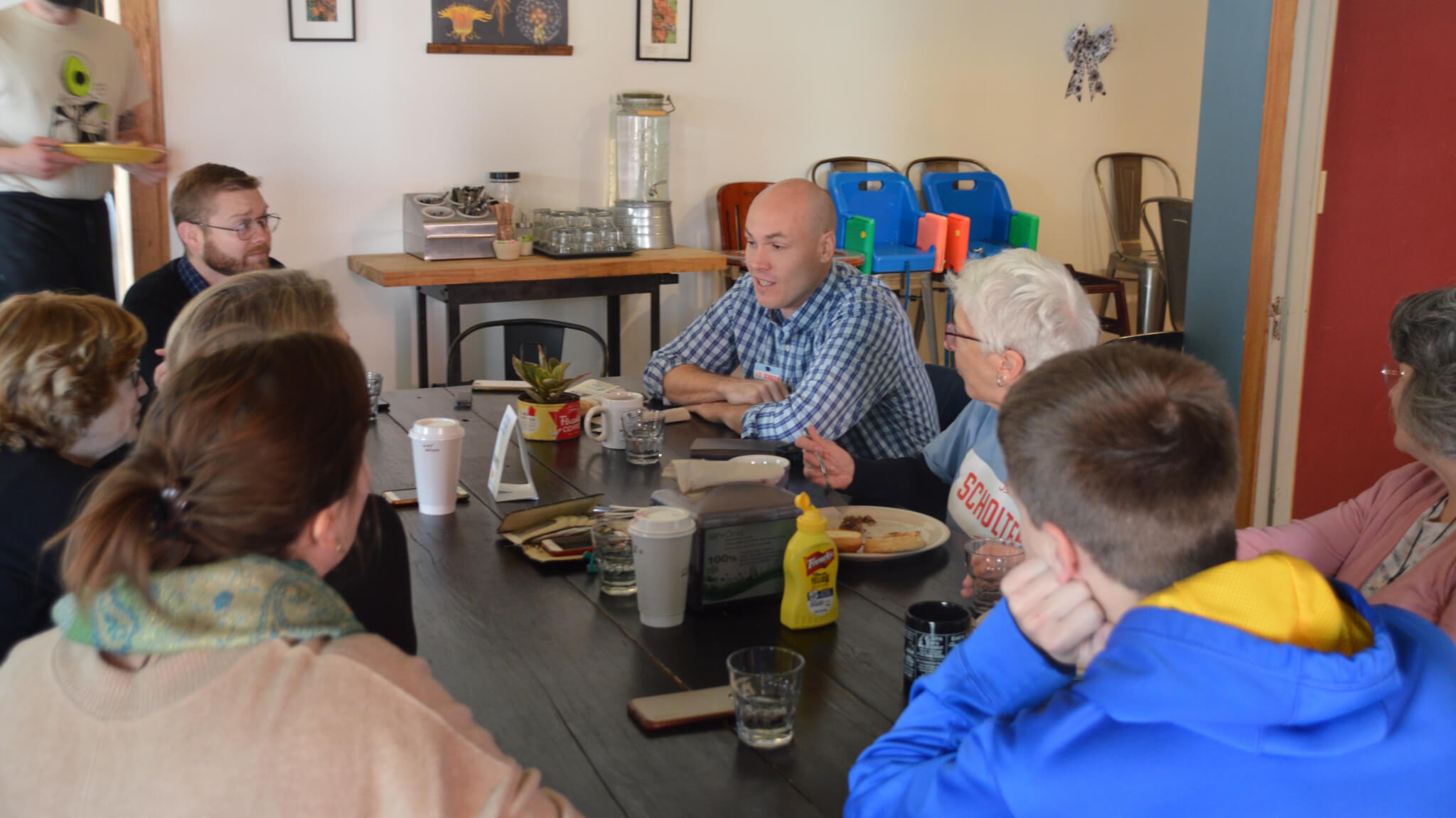 One of the earlier signs that something was happening came from the surprisingly large turnouts that Scholten saw for his town halls. He notes often on the campaign trail how few public events King holds in his own district.

Democrats also have a serious financial advantage here. Scholten has out-raised King, $1.4 million to $670,000. Scholten’s been on the TV airwaves in most of the district unanswered for weeks. In fact, there seems to have been no paid communication of any kind that’s attacked Scholten or tried to define him in a negative way.

That’s a far cry from King’s 2012 campaign against Christie Vilsack, one of the few times he ran a serious operation. He spent $3.7 million in that race, and another $2 million in 2014 against Jim Mowrer.

King has mostly spent his funds this year on salaries for his family members who “run” his campaign. Most of their public activity seems to revolve around sharing right-wing memes on King’s Facebook page.

Their campaign put out an internal poll on Tuesday from a week ago that showed King up 18 points. That would fit some of his recent victory margins, but if things have tightened significantly in the past few days, King has no resources or ability to respond, especially with the NRCC staying out.

And Scholten’s fundraising will only grow from here. He could still place ads in the Omaha market and increase their Des Moines buy (the 4th District, split between six media markets, gets very costly to cover every county). He watched in real time on Monday and Tuesday as their online donations jumped, timed in part to when people on the East Coast woke up and started re-tweeting the new poll.

A lot of that is driven by social media, which was an early focus for the campaign.

“I knew if we were going to have a chance to beat Steve King, I needed to have a connection to the world,” Scholten explained. “And that connection is Twitter. We’ve put a lot of work into Twitter, but it’s paying off now. That response to the poll is 15 months worth for that one moment. Even if we were six or ten points behind, what happened in the last 24 hours, I think it’s game on.”

In fact, Scholten might have found himself in the best position possible to surprise King: sneak up on a lazy incumbent and get hot at the end (while that incumbent also implodes). Republicans may had better prepared against Scholten if he was bringing in millions and millions of dollars early on. Now, he’s essentially getting a free pass as he heads toward the finish line.

“You don’t know if these things add up or not, we won’t know until election night, but each day I get more and more confident,” Scholten said.