When Donald Trump visited Iowa in July this year, he tossed “Make Farmers Great Again” hats into a crowd outside Dubuque and thanked Congressman Rod Blum for support of his agenda. Blum responded by praising Trump’s handling of the trade wars and tariffs.

“Thank you for having political courage to renegotiate these trade deals,” Blum told Trump. “You’ve taken some heat for it in the short-term, but in the long-run, the farmers, the manufacturers, the employers are all going to better off.”

As we suspected at the time, Blum may come to deeply regret those words. An ongoing poll from the New York Times’ Upshot in Iowa’s 1st Congressional District shows 54% of voters opposing Trump’s tariffs on steel and aluminum. Only 36% support them. Those tariffs have hit working-class manufacturing neighborhoods and small towns throughout the 1st District hard in the past year.

Additional retaliatory tariffs from the Chinese on soybeans have also damaged many Iowa farmers’ bottom line. Indeed, it’s hard to think of many congressional seats around the country where Trump’s trade war have made a larger impact on the local economy.

That is likely one of the bigger contributing factors to Blum’s bleak reelection numbers. The poll currently shows Democratic challenger Abby Finkenauer at 51% to Blum’s 37%. Another 12% say they are undecided. (The Times is showing their polls as they’re conducted live; this one has 477 respondents so far, and they usually get around 500. So, while it’s not finished yet, the margin of error of +/- 4.8% is low and it’s nearly done. If things change significantly with the final few dozen respondents, we’ll update this post.)

The President’s favorability numbers in the district aren’t helping things. 55% say they disapprove of his job performance, compared to just 39% who approve. 48% think that Democrats should retake the House, while 40% say Republicans should hold onto it.

And while Trump’s tough talk on trade seemed to help him in Iowa for his 2016 election, Iowans appear to be rethinking their stance on the trade agreements that benefit their state. The poll has 58% of respondents supporting NAFTA.

Meanwhile, voters just narrowly approve of the Republican tax plan (47% support to 45% oppose), which Blum has campaigned heavily. But that apparently isn’t enough to overcome concerns with other parts of the Republican agenda.

Blum won reelection by eight points in 2016 thanks in part to connecting himself with Trump (which the Democrats did as well in their TV ads). Trump carried the 1st District by four points, a dramatic reversal from Barack Obama’s 14-point win there in 2012. Blum himself was seen as a sort of Trump prototype politician, presenting himself as an outsider businessman who could shake up Washington. But that alliance with a president who now finds himself very unpopular in a trade-reliant Iowa could be his undoing.

That’s not all of Blum’s problems, of course. He’s committed a number of unforced errors since his reelection in 2016 and finds himself mired in scandal and controversy. A House ethics investigation just opened into his ownership of a shady internet reputation company.

In her campaign for the district, Finkenauer has run on a blue-collar image and kept her policy focus on good-paying jobs and healthcare. The trade wars haven’t gotten a lot of play yet on TV ads in the 1st District.

Part of Democrats’ key to success in the past in the 1st District has been keeping the margins in rural communities relatively close. Obama carried nearly every county, including the rural ones, in his 2012 reelection. It’s a small subset of voters, but Finkenauer certainly must be happy about the number of blue dots in rural areas in the poll: 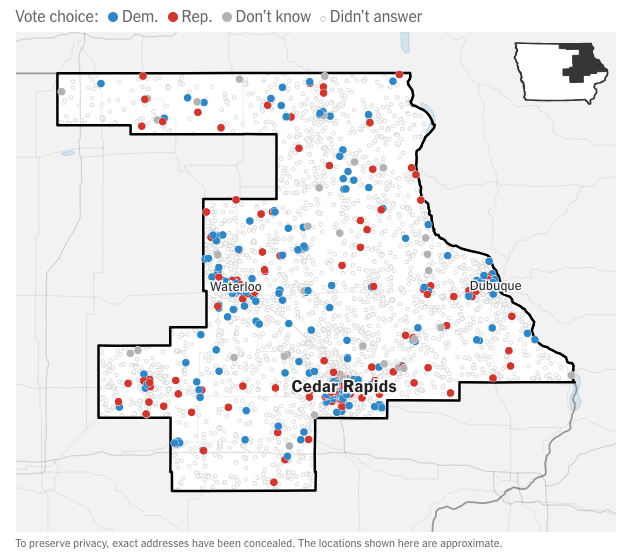 National Republicans have considered giving up on Blum’s reelection. Democrats are vastly outspending Republicans on TV ads so far, the Des Moines Register recently reported. And the situation for Blum may only get worse during harvest season as farmers throughout the district bring in their crops that now sell for much less thanks to Trump’s actions.