This wasn’t the election scenario Tracy Freese envisioned when she first launched her campaign to take on Bill Dix, but she’ll take it. A special election date of April 10 was just set yesterday by Governor Kim Reynolds to fill former Senate Majority Leader Dix’s seat in the Iowa Senate. It comes after the senator’s swift resignation on Monday once a video and article showing he was engaged in a romantic relationship with a lobbyist was published.

Freese, a Democrat, told Starting Line she was inundated with phone calls shortly after the story broke. She was on a spring break vacation with her family in Chicago, walking around a Wal-Mart to get food for their hotel room, when she noticed Senate Minority Leader Janet Petersen was calling her.

“I’m not terribly surprised,” Freese said of Dix’s behavior with the lobbyist. “And given the historical perspective of this, I really didn’t expect that he would resign. I just didn’t … This is not the first straw. The first straw was the sexual harassment lawsuit. This should have already happened.”

Now she faces a hurry-up-and-win special election, where she’ll face off against former Republican State Representative Annette Sweeney. The winner of the special may not even vote in this year’s legislative session, however, as the swearing in will probably occur in mid-April. Both candidates have filed their nominating petitions for the November ballot and will compete again then regardless.

But Freese will have a head start in organizing, having declared her candidacy last July, four days after the initial jury verdict that awarded Kirsten Anderson $2.2 million in her sexual harassment lawsuit against Senate Republicans.

“Running for state office wasn’t even on my mind, I was thinking maybe school board, something locally,” Freese explained. “But I couldn’t deny when the sexual harassment lawsuit came out against Bill Dix that I could do something there.”

Freese had long been involved in community service, but not as much in politics. Like many other first-time candidates this year, the 2016 election results motivated her to do more.

“Trump happened and I stopped being as complacent politically and wanted to get involved,” she said. “I walked into my first [county Democratic] central committee meeting and walked out the chair of my county.”

She lives in Dike, Iowa now, part of Grundy County, but grew up in Clinton. Her mother was permanently disabled with multiple sclerosis and her parents were divorced. Freese’s father was a union welder who lived in Clarence and raised cattle and did some farming. She noted that she got the best of both worlds – growing up in a 4-A school, but also getting plenty of rural exposure.

Freese grounds her Democratic and progressive beliefs in much of that reality of her upbringing. With her mother’s disability, her family got by on help from social security checks, heating assistance and free lunch programs at public schools.

Never moving out of Iowa, Freese attended college at Mount St. Clare in Clinton (now Franciscan University) to get a business administration degree. She later obtained a masters in organizational communications at the University of Northern Iowa.

Freese worked her way through her education, both in high school and college, with a job at Taco Bell. She got a work permit to begin working there at age 14 and became a manager and stayed there all the way through college.

“Those early experiences as a Taco Bell manager in my teenage years were amazing and set me up for a great work ethic, understanding business. I knew I wanted to get into business,” she explained. “Work is not something I don’t understand.”

Straight out of college she began working in finance, which included agriculture financing and planning, and did that for about 13 years. In 2013 she began her own marketing company that started from her kitchen table and now employs seven people and works with clients around the world. Part of that work continues to help farmers manage their assets and estate.

Aside from her education and work, Freese stayed involved in community service. Her grandparents were very active Republicans and engaged in politics, always working at the polls on election days. Her grandfather was the head of his local VFW, and helped give Freese a sense of civic duty. Freese’s civic work began by being on the Clinton mayor’s youth commission, where they worked on things like building a skateboard park.

“When you don’t have a lot of money to spend on donations, I always try to give my time,” she said.

But now her focus has turned to the campaign side of public service, both from Trump and the impact she’s seen Republican policies take on her own family – her husband is a public worker union member.

“We understand organized labor and its impact and what the legislation has done,” she said. “It’s hurt us financially as a family because of the changes and price increases.”

While much of her campaign up to this point highlighted her economic policy ideas, opposition to Dix and the senator’s involvement in the sexual harassment scandal was obviously a major point of discussion. The prospect of taking down Dix at the ballot box was always a draw for her campaign events, but she’s happy to be able to focus now on just the policy issues.

“I’m excited about being able to switch off that,” she said. “It’s an opportunity as I see it for the rhetoric to move into a pro-District 25 message.”

Now she’s looking to promote her background and experience in finance issues to deliver her message on progressive economic ideas. Her biggest discussion topic is how to keep young people in Iowa or how to entice them to move back.

“You want to see your children or grandchildren stay in Iowa as you did,” Freese said of voters in the district. “Those policy pieces are affordable daycare, rural hospitals, strong enough wages so that if you choose not to go to college you have a position in life so you can support a family … You want to be by your family, you want to be close to your support system. If you can’t find the necessary job or opportunity, that makes it very difficult. It’s not really partisan.”

Getting rid of some of the partisanship and drama is another key of hers, which might be attractive to local voters tired of their former senator’s scandals.

“Overall, people are tired of divisiveness,” Freese said. “They’re tired. I’m tired. Maybe it’s the woman in me, but patience and compromise and having the big, messy discussions and reading and looking at facts is important. Is that boring? It might be these days, but that’s what I want to be … I think the previous business-as-usual is you get voted in by your neighbors and then you go to Des Moines and forget all about the realities your neighbor is facing.”

Senate District 25 itself is one of the more Republican ones in Iowa. Registered Republicans outnumber registered Democrats there by about two-to-one, and Trump carried it 60% to 34%. It covers all of Hardin and Grundy counties and parts of Butler and Story counties. 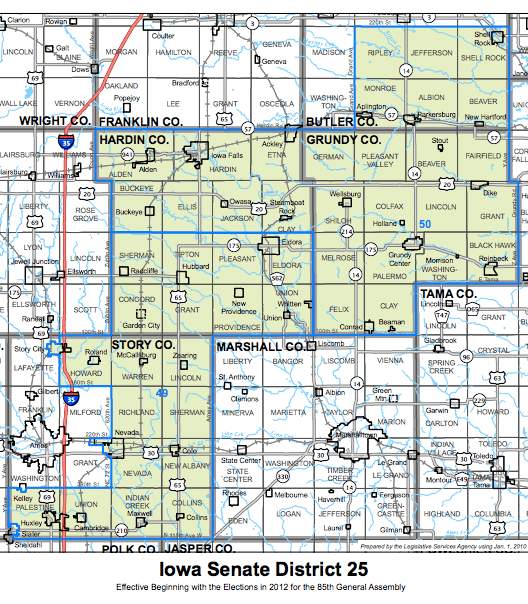 Despite the Republican lean to the district, Democrats are hopeful that their outsized success in recent special elections will give Freese a boost here. She noted that she’s already received a lot of help from local organized labor, as well as statewide help through networks like Indivisible. And donations to her campaign have reportedly skyrocketed since Monday.

“Women have been a huge area of enthusiasm for my campaign for probably obvious reasons,” Freese said. “Otherwise, in general every time we’ve done events in the district there’s been larger crowds and support. The enthusiasm is definitely there.”

The Democratic Party and other progressive groups have started organizing various volunteer efforts for the special election. You can find out more about Freese on her Facebook page and her website.