A video recently obtained by Iowa Starting Line appears to show Senate Majority Leader Bill Dix in a romantic relationship with a Statehouse lobbyist while out at a Des Moines bar. The evening the two were together happened on Thursday, March 1 at Waveland Tap on University Avenue.

The people who captured the moment on their camera phone say they recognized Dix from media reports, including those surrounding the Senate Republican sexual harassment trial and settlement. They observed Dix flirting with and occasionally kissing a younger woman at the bar in the evening. They are not affiliated with a campaign or party organization, but were members of the general public who happened to see the scene while at the neighborhood bar.

Here is the video – the more relevant parts occur near the end. (Starting Line edited out half a second of footage where you briefly see part of the people who recorded the video – they requested anonymity).

The woman in the video has been registered and works as a lobbyist for various municipality groups at the Statehouse for the past two years.

The bar patrons who recorded the video also took a couple pictures of the two where you can better see what certainly appears to be Dix: 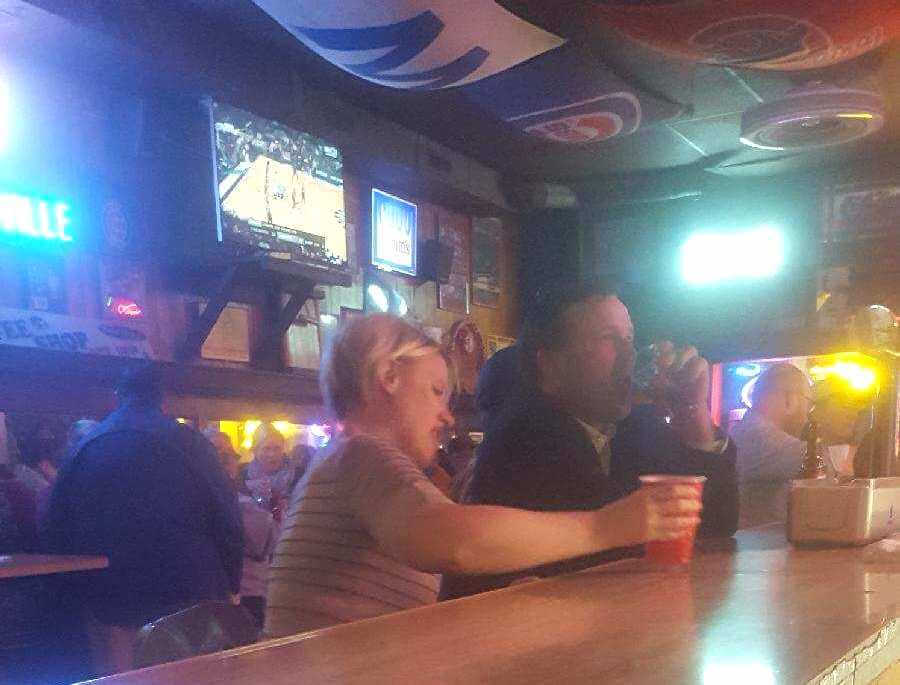 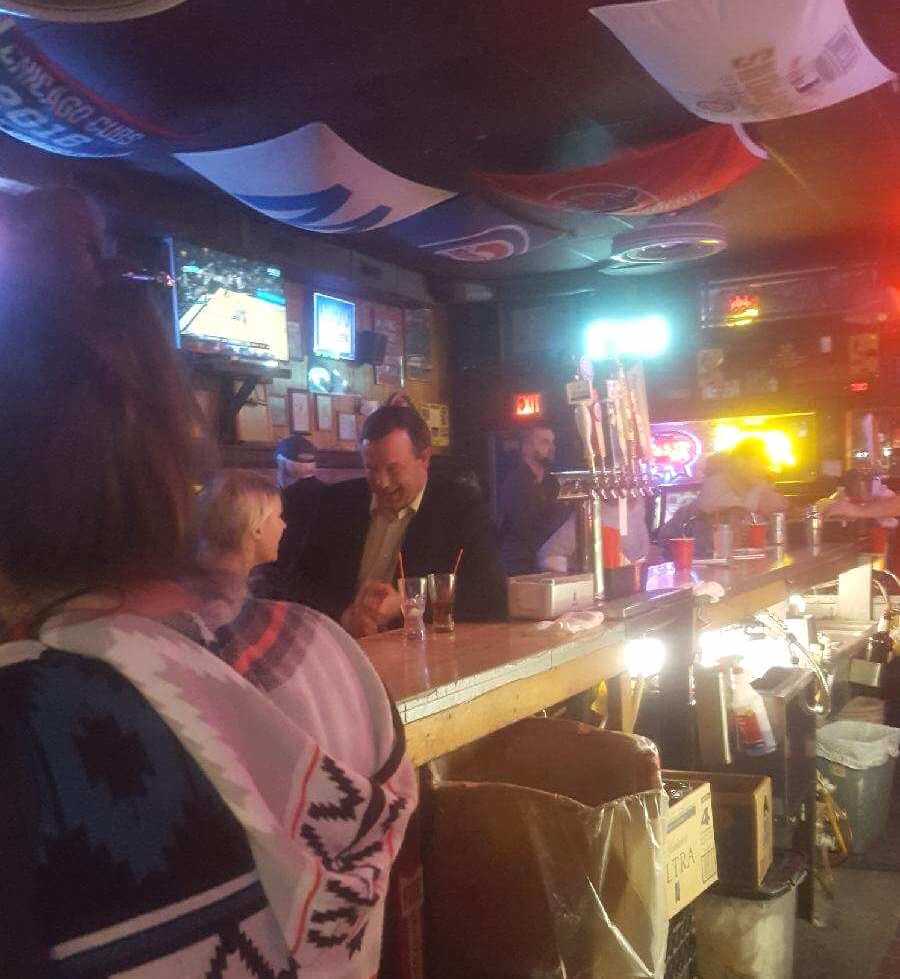 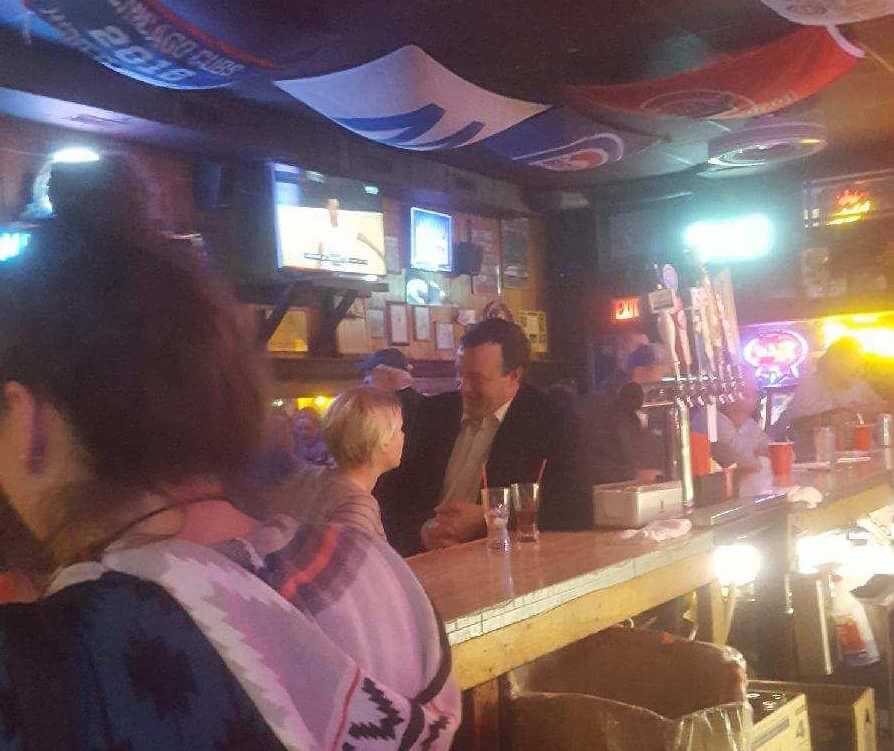 It also appears to be the same black suit and white shirt combination that Dix was wearing earlier in the day (sans tie).

Starting Line spoke with several people at the Waveland Tap this Saturday. They didn’t recall seeing someone who looked like Dix at the bar recently, but they also weren’t there on that Thursday evening. The bar is, however, a regular hangout for several lobbyists, and bar patrons Starting Line spoke with said they’d seen senators in there before.

Senator Dix’s office declined to comment. The lobbyist in question declined comment when contacted by Starting Line this morning.

The moment at Waveland Tap came just weeks after legislators and staffers at the Statehouse conducted a new sexual harassment training. It also came months after Iowa taxpayers were put on the hook for a $1.75 million settlement from the Kirsten Anderson lawsuit.

Senator Dix has come under significant scrutiny for his role in firing Anderson hours after she reported a toxic work environment and for continuing to insist he did it solely for job performance reasons. He faced a call to resign from one member of the Republican caucus after the initial $2.2 million jury verdict was handed out. He weathered further outrage and calls for him to step down when he refused to make public Senate Republicans’ internal investigation into the matter (they later released it over the Thanksgiving holiday, and the report seemed to contradict some of Dix’s public statements about it).

Late last year, the Iowa House and Senate hired a human resources director to handle sexual harassment issues. Dix himself also brought in former Ambassador Mary Kramer, who once served in the Iowa Senate, to advise on changing the “workplace culture” of the Iowa Capitol.

Those efforts seem to have had little impact, according to Katie Ervin Carlson, an Iowa attorney who specializes in workplace employment and sexual harassment matters.

“This footage would suggest to me that the sexual harassment training was not effective, at least not for Mr. Dix,” Carlson said after viewing the video.

“As long as men in power can continue to abuse their power without consequences, this problem will not be fixed,” Carlson explained. “Someone who was afraid of the consequences of their behavior would not be doing something like that in public. That suggests to me that we’ve failed the people of Iowa in terms of fixing the problem so far.”

She didn’t have an opinion on whether the scene constituted any actual legal issues, but said that a senator placing himself in such a situation could lead to conflicts of interests and consequences down the road. As senate majority leader, Dix isn’t just a vote in the Iowa Senate – he can decide which bills come to the floor in the first place. For a lobbyist pushing certain legislation, that person holds considerable power over their job.

“He can abuse his power here,” Carlson said. “Maybe he says, ‘I’ll help you get your bill through, but now I need x, y and z’ … Even if he doesn’t ever say the words to her, it’s just inherent in the power differential that he will always have an upper hand.”

Whether or not Dix and Senate Republicans find themselves in more trouble with sexual harassment issues, just public knowledge that a senator was engaged in a relationship with a lobbyist over whom he has significant power could impact future cases elsewhere.

“If I were representing the next Kirsten Anderson and making claims of sexual harassment, a hostile environment or retaliation up at the Statehouse, I would certainly use this as exhibit one that not only is it still being allowed to go on, but two, I think it makes claims more credible,” Carlson said.

Carlson also questioned whether Statehouse leaders would ever change, considering there was a huge public relations fallout that resulted from the public trial and settlement and senators still appear to be acting in this manner.