After months of abated breath, we can add two more moral victories to our trophy case. Archie Parnell ended with a closer margin than did Jon Ossoff, despite the millions and millions of dollars difference in their campaign expenditures. Disappointing, to say the least.

If you haven’t already, go and read this article by Pat. His piece is the right mix of hopeful and analytical, and was also the material which inspired me to write this article. Again, I encourage you to read the writing in full, but there was one statement in particular on which I’d like to elaborate further. After explaining his worry that national leaders might be lulled into complacency given the results, Pat said:

“I have particular doubts about how Democratic field strategies have been developing in recent years and whether our in-person conversations and targeting of voters are actually working.”

Given our continued defeats, I think he’s right to raise this point. I don’t have to be as cautious with my criticisms, so what follows is a list of areas where I think the Democratic Party should change how it campaigns.

Jon Ossoff followed in Hillary’s footsteps with his ad strategy: blanket the airwaves with television ads lambasting the opponent or advocating for the home team. Jon Ossoff bought 13 million dollars of ad time, while Karen Handel spent $2.8 million. Follow the link and you’ll see that even more money was spent by outside groups, which ballooned the final election expenditures to be over $50 million.

Yet, what is the point in such heavy investment into TV ad campaigns? Ironically, research has indicated that campaign ads are effective at increasing interest, but that increase rapidly decays over the course of a week or two. Democrats should learn from this by recognizing ad campaigns should be used as a primer for action preceding a significant event, like election day. Since ads are only effective for a small amount of time, there is no point to blanketing the airwaves for weeks and months at a time; ads last 30-60 seconds which is not enough time to forward a substantive argument, so why create ads which make that attempt?

Instead, we should tailor ads toward garnering attention for our candidates, or to alert the public to an impending election. Television may not be persuasive but it can inform, so grabbing voter’s attention and getting them interested to learn more should be our ad campaigns strategic goal.

Each campaign I’ve worked on was unique yet an all-too-familiar experience: I’d canvass Dubuque neighborhoods on the weekends, call from a list of names during the night on weekdays, and often ended up asking some of the same people the same questions many times over before Election Day rolled around. Repetitive contact was necessary in order to create an accurate and complete list—or “universe”—of voters who would ultimately turn out to vote. Furthermore, this universe would guide our GOTV operation in the days leading up to Election Day. An accurate list would lead to an efficient GOTV operation, and the better, more efficient GOTV operation would win the election—or so the thinking went.

However, this campaign logic has turned out to be flawed, as demonstrated by this study from Harvard; by calling the same numbers and knocking the same doors, we annoyed the same people to such a degree that we lost their vote. We weren’t creating an accurate voter universe for our future GOTV effort.

In fact, by campaigning as we did, we discouraged “low-propensity” voters from turning out while simultaneously creating a universe containing only “high-propensity” voters. In the process of identifying a candidate’s level of support, we call people 5, 10, 15, 20 times too many and turn them off from voting altogether—and every vote counts in those races where vote totals differ by three or four digits. Rather than campaign by quota, with 3 hours of mandated call time each day, we should make contact less often and more purposeful; instead of making routine calls to check a box yes or no, we should be sincere and broach more meaningful discussion with voters. 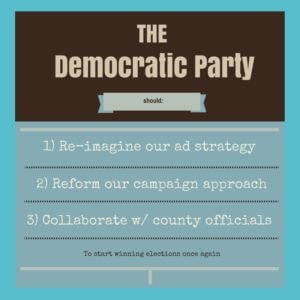 What can be done to solve these problems? While I cannot offer answers, I can give some suggestions.

For starters, we need to find a better system for intra-party collaboration. In my experience, the IDP, DNC, and County Democratic parties work largely independent from one another. Previously, this could be justified by the fact that county-level parties had shrunk in size and influence over the years.

However, by shutting local Democrat Party officials out of the campaigning process, we no longer have the capacity for year-round outreach efforts. State and national party committees will hire out-of-town operatives to staff and direct the campaign, while local party officials are expected to hand over the reins—which makes it impossible for us to switch from campaign-centric contact to a year-round approach.

With this process, local officials don’t gain the administrative and strategic experience necessary to continue outreach efforts after the state and national people leave. Thus, since people only hear from Democrats during campaign seasons, as opposed to year-round, there becomes a perception that Democrats only care about a person’s vote, not the person, and people detest being treated as a means to an end—in addition to compounding county-level atrophy since there isn’t activity during election off-years.

It’s time that we encourage county Democratic officials to adopt their own outreach efforts, train them in the skills necessary, and give them the support they need to succeed. Rather than working separate from county officials, state and national committee operatives should expand upon the infrastructure already created. Democrats love to talk about grassroots organizing, and this is one way to prove it.

6 Comments on "Time For A Change In Democratic Campaigns"