The political data site FiveThirtyEight published a story today that looks at where Hillary Clinton and Donald Trump have the potential to pick up new support over their party’s vote totals in 2012. The conclusions are not good for Iowa Democrats.

Iowa takes on a dark shade of red in their map, which looks county-by-county at voting demographics and how that lines up with shifts in Democrats and Republicans’ support. Our state is one of the uniformly red in the country. Wisconsin and Minnesota have their similar issues as well, though Maine seems to be the worse off. That’s the state where their governor declared yesterday that Trump should be an “authoritarian power.” 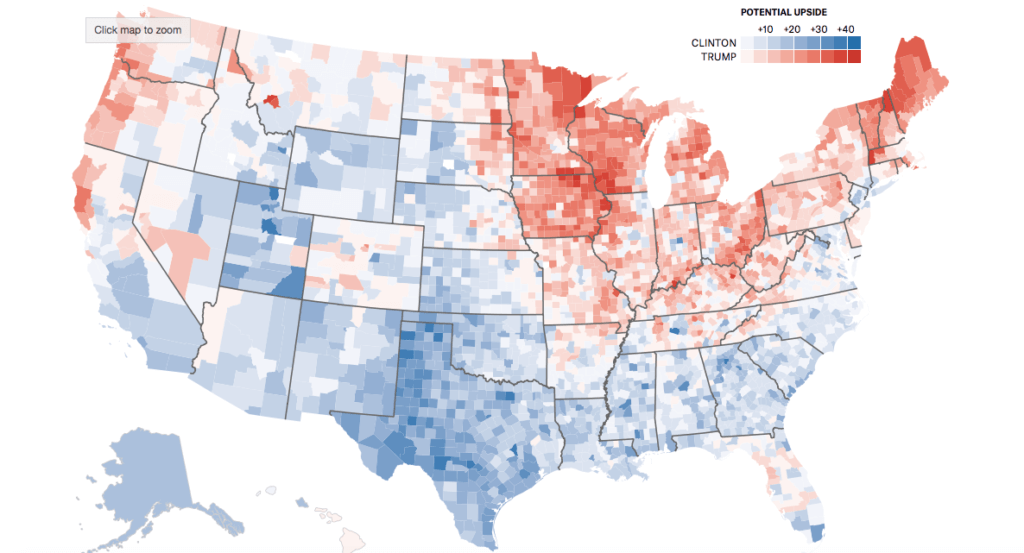 What’s even more interesting is when you zoom in and use the interactive map to look at individual counties. 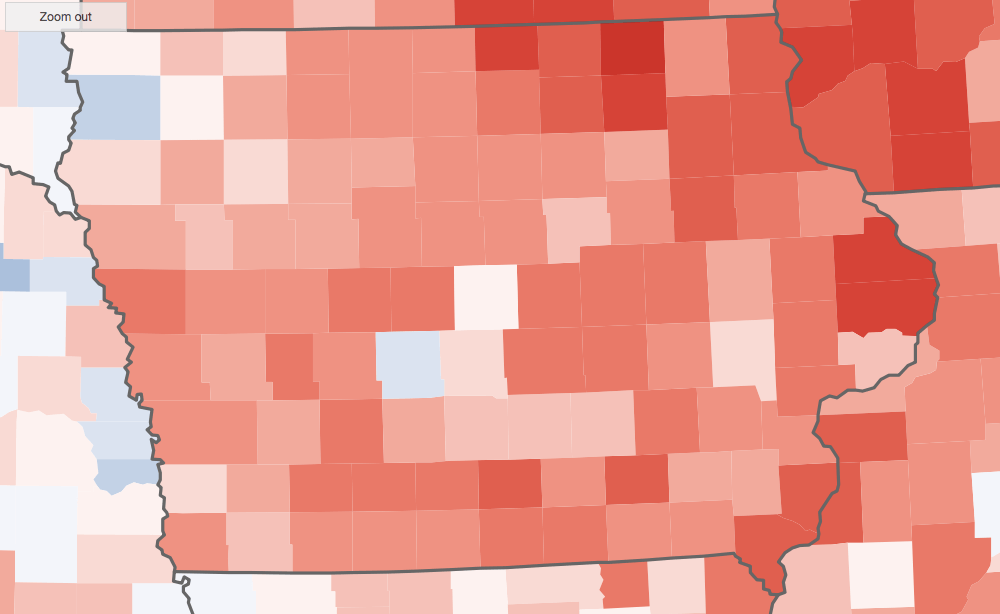 Now, as you mouse over each county, there’s some pretty big and scary numbers there, like Trump +36 in Chickasaw County. Obviously this isn’t meant to imply that a county would swing over 30 points in favor of the GOP from 2012. They built the model by looking only at how many people of each demographic group lives in that county, and also used it to model how much support Obama or Romney got of that group in 2012. So it doesn’t account for the fact that counties in North and Northeast Iowa that are Republican on paper by registration numbers have actually voted strongly for Democrats in the past. By not using the actual vote numbers from 2012, it misses out on the strength of local parties organization, like Democrats in Northern Iowa and Republicans’ evangelical network in Northwest Iowa.

And when they ran a “vote swap” test, they only assumed that one in five voters would flip from either group. So the potential for the vote totals to move from 2012 is much lower than some of the numbers that pop up on the map. Still, all those caveats aside, it’s an important look at Iowa to be able to compare relative new strength for Trump across the state.

We’ve known from polling and anecdotal evidence on the ground that Iowa is trending more Republican than usual thanks to Trump, but this map provides a helpful breakdown of where it could happen the most. The huge problem for Iowa Democrats is that the reddest counties lie right in the swing legislative districts that will determine the majority in the Iowa House and Senate (revisit our senate and house rankings). Even if Republicans only end up over-performing past numbers by one or two percent in some of the reddest of counties on this map, that could still make an important difference in those races.

The deepest red cluster of counties in Northern Iowa basically outline Senate District 26, Mary Jo Wilhelm’s district. She won by 126 votes in 2012, though doesn’t have an incumbent Republican to beat this time. Democratic Senator Brian Schoenjahn’s Buchanan/Fayette/Bremer-based district isn’t much better, with “potential upside” of +33, +31 and +17, respectively (again, that’s not how much Republicans would actually have any chance of gaining, it’s just comparatively big).

Jackson County doesn’t look great, where House Democrats hope to pick up Brian Moore’s district. Tama and Marshall counties, home to the Sodders and Wrage races, are pretty red too. Senator Chris Brase’s Muscatine and Scott County-based district is one of the okay ones for Democrats. Dallas County looks better, which makes sense with Clinton winning that overwhelming in the caucus. Polk County isn’t too much redder, and given Dallas County’s numbers, the suburban districts where Democrats hope to pick up House seats could be trending toward Clinton.

All of this should just be one more reminder to Iowa Democratic activists how important it is to go out and volunteer in these legislative races. Democrats are defending senate seats they narrowly won in 2012, and could use some extra help with absentee ballots in the tougher fight this year. Clinton can get to 270 without Iowa, and the future of Iowa’s education, mental health and water quality rests in a handful of key state legislative races.

Obviously, all this may be rendered moot if Trump keeps on his path toward total implosion. But Democratic volunteers should play it safe by giving what extra support they can to the targeted legislative districts.