I was excited when I saw Hillary Clinton’s final Iowa schedule. Sunday, her last day of full campaigning in the state, took her through Western Iowa, her stronghold of support from 2008. It was where I worked for her in 2008 in Council Bluffs, so I thought it would be a nice bit of nostalgia to follow along on the trip.

But I was surprised at what I saw. The turnouts in Council Bluffs and Sioux City just a day before the caucus were okay, but nothing special. About 600 showed up in Council Bluffs, a place where Clinton drew over 800 a few days before the caucus in 2008. And only 450 were on hand in Sioux City. In the crowds were many key activists who were with Barack Obama and John Edwards, now on board as Clinton precinct captains and volunteers. But something was missing: younger, working class white people.

I was confused over the difference at the time, but apparently I was witnessing one of the main underlying dynamics of the most fascinating thing to come out of the Iowa Caucus: that much of Hillary Clinton’s base of support has essentially flipped from 2008.

In possibly the biggest surprise of caucus night, Bernie Sanders won many of the Western Iowa counties that made up Clinton’s western wall in 2008. Pottawattamie County, Clinton’s strongest 2008 county, went to Sanders by a slim 50.7% to 49%. Woodbury County, home to Sioux City, fell to Sanders by a larger 53.3% to 46.3%.

Why the change? It’s certainly not for a lack of trying. I met many of Clinton’s team out there, and they were by far and away one of the best groups of field organizers I’ve ever seen (and they did have their victories – Carroll County went for Clinton with 63%), who had built very impressive volunteer networks. And Sanders himself barely visited the region. So something else big was at work here.

It’s hard to know for certainty without interviewing everyone on the ground, but we can get a sense of what happened by looking at the precinct-by-precinct results. Let’s take a look at the results in Council Bluffs from 2008 to start with. Here’s my poorly-made map from then (there isn’t 2008 county level maps online): 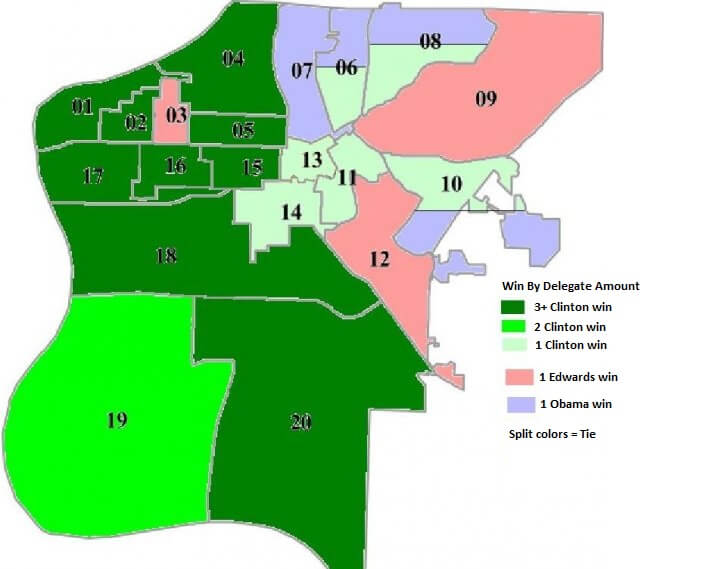 The west end of Council Bluffs is largely working class white. As is the south part of town by Lake Manawa, though there’s some nicer neighborhoods thrown in with some trailer parks. Downtown has a lot of public housing. The hills are mostly middle and upper-middle class neighborhoods with better-educated residents.

Now take a look at Monday night’s results (it’s a little small to see, but you can also look on the results website). The red is Clinton, the orange is Sanders and grey is a tie. 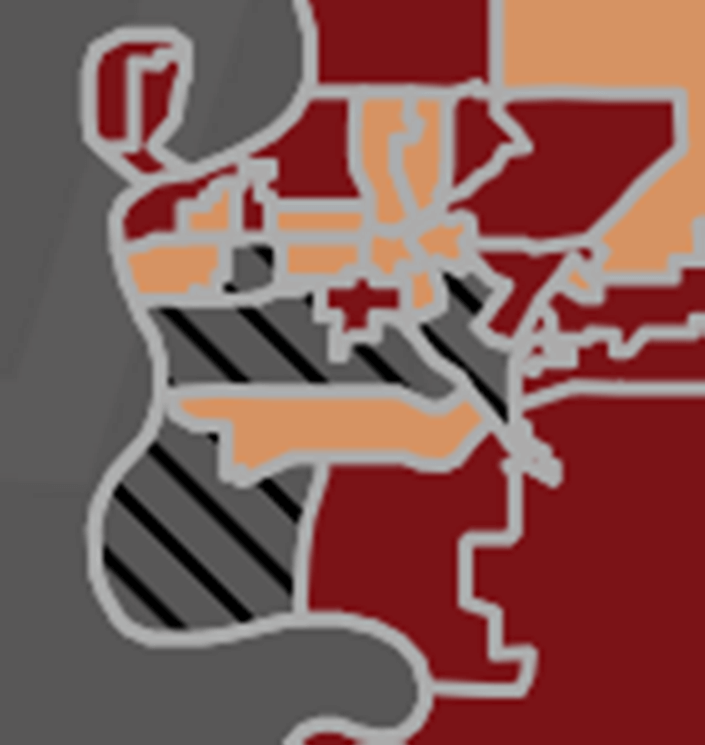 Much of the city flipped. Clinton still won some areas on the west end, but Sanders picked up a lot of precincts in the working class neighborhoods. He also took all of downtown. And this time Clinton won the higher-income precincts of 8 and 9 on the northeast side of town.

Obviously, age was the main determining factor in the split between Clinton and Sanders, which I’ll get to in a moment. But this economic difference is interesting.

Bright and early on the morning of the 2008 Iowa Caucus, my fellow Clinton staffers and I stormed the trailer parks in Council Bluffs and put fliers on every single door about attending the caucus for Clinton. In every precinct that contained a trailer park, Clinton won 50% of the delegates, a big victory in that 3-person race. We did it after finding overwhelming support there earlier in the campaign. Why did they like Clinton then?

It may seem like a long time ago, now that Sanders has fully captured the mantle of economic populism, but there was once a time when the Clinton name was synonymous with working class. When we talked with folks in the trailer parks, the Clinton brand was still strong. For many of them, the last time they had a good-paying job was during Bill Clinton’s time in office. It’s part of why Clinton won in later primary states like Ohio and Pennsylvania.

But Council Bluffs precinct 21 (a new one created after 2008), which contains the county’s largest trailer park, was won 2-1 by Sanders.

And yet Clinton still won the state, albeit narrowly, not something you might expect if she was losing places she won in 2008 (like also in Cerro Gordo County, which Clinton took in 2008, but lost to Sanders in 2016). So where did she make up the margin?

In places like my precinct. When I attended my caucus location in West Des Moines, I was concerned it wouldn’t go well for Clinton. My suburban, well-educated, middle to upper-middle class neighborhood of all established houses was Obama’s base of support in 2008, and where Clinton often performed poorly. Instead, on Monday night, Clinton won my precinct with 4 delegates to Sanders’ 2.

As you can see from the Polk County map (this one is better to look at online), Clinton dominated the suburban precincts in West Des Moines, Clive, Johnston and Urbandale. I know the West Des Moines precincts pretty well, and the ones Sanders won are the two Valley Junction precincts, a small working class neighborhood. The ones where he tied almost all have apartment complexes where many younger voters live. 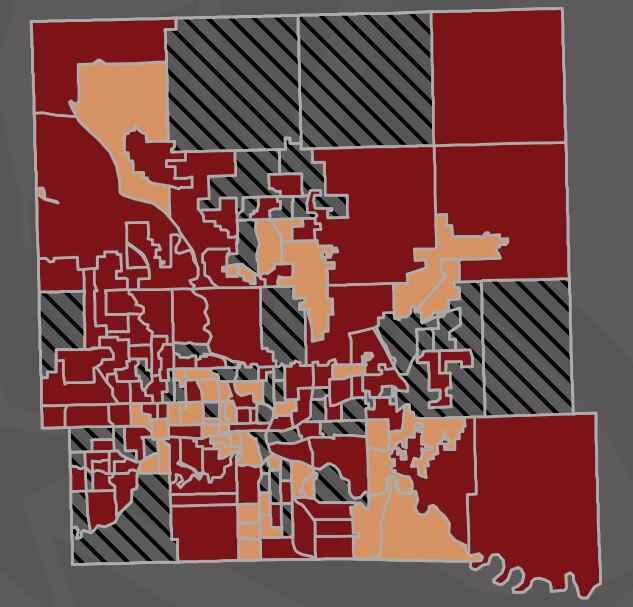 For a starker example, look to Dallas County. Despite getting destroyed there in 2008, capturing only 25%, Clinton won handily this time with 57%. That’s a massive improvement.

Now, this trend doesn’t track perfectly and there’s some exceptions around the state. Some of those could be caused by particularly strong volunteer networks from one campaign or the other. But you can see it in places like Dubuque County. In places like Linn County, however, the fight for the suburbs was more evenly-matched, with Clinton taking Hiawatha, but getting lots of ties and a few losses in Marion.

Again, the biggest breakdown between Clinton and Sanders came strictly on age lines. In the CNN entrance poll, Sanders obliterated Clinton among 17-29 year-olds, 84% to 14%. So any precinct with decent populations of younger people was going to do well for Sanders, and many working class neighborhoods trend younger.

The education breakdown is a little more mixed. Clinton easily won postgraduate voters 53% to 39% in the 2016 caucus, while Sanders won those with “some college” 52% to 42%. But Clinton also won high school or less 58% to 39%. This again is a flip from 2008 where Obama dominated the higher educated voters.

This all points to the interesting differences between Sanders’ and Obama’s insurgent campaigns. Many have suggested Sanders is recreating Obama’s success in inspiring new voters to get engaged and running on a more hopeful, optimistic message. And there’s certainly similarities in the youthful movement behind both Sanders and Obama.

But the coalition is vastly different in many ways. Much of that comes from the different types of revolution Obama and Sanders spoke of.

Obama wanted to usher in a new era of civility in Washington D.C., bringing together Democrats and Republicans to end the partisan rancor and actually get things done. It was a very high-minded, process-focused appeal that included more poetry than policy. And it became a perfect fit for well-educated, better-off suburban voters. When he added African Americans to his coalition in later states with larger minority populations, it became an unstoppable force.

Sanders, on the other hand, is focused solely on economic populism. He certainly inspires a different way of doing politics, but it’s all backed up with specific tax-the-rich, free college and Medicare-for-all policies. So aside from the young voters he’s cleaning up with, he’s also built a base of poor and working class voters. But that revolution may go too far or sound too impractical to economically secure suburbanites who once favored Obama.

So while Clinton won the beer-drinker’s vote in 2008, she’s now moved on to the wine-loving crowd in 2016, who see her years of experience as the more rational choice.

There’s also the racial component to all of this, which I’ll only briefly touch on. Sanders ran surprisingly strong in several rural counties, much better than Obama, perhaps due to a lack of having to deal with latent racism. Meanwhile, Clinton kept places like Scott County, where she was trounced by Obama in 2008, exceptionally close with Sanders thanks to big wins in Davenport’s African American precincts.

This all has major consequences going forward in the 2016 Democratic nomination battle. The kind of big precinct-by-precinct flips in support for Clinton over 2008 you saw in Iowa may happen at the state level across the country. Places like Ohio may not be nearly as hospitable to Clinton this time around.

Some pundits are already wondering if Clinton’s candidacy will see deja vu from 2008 in her looming long fight with Sanders. But whether she wins or loses this year, it will be for much different reasons, at least on the demographics aspect, than 2008.