The Iowa State Fair has come and gone, with another year of political candidate visits in the books. Starting Line attended nearly all the of the Soapbox speeches hosted by the Des Moines Register, but got a little distracted with fair food afterward and I didn’t write them up right away. Instead, let’s do a review of the Iowa candidates’ speeches, which are still quite relevant as each perfectly encapsulated where the candidate is at in their race. It will be interesting to watch how their pitch changes post-Labor Day as we move ever closer to early voting.

None of the candidates drew crowds larger than 100, and most audiences were made up of party activists and color-coordinated issue group members, like from AARP and the Rural Power group. For some of the independent candidates, only a small handful of people sat in the chairs. Gone were the massive crowds and national press from the presidential candidate speeches in 2015, but so too were protesters – there were no disruptions this year.

Most of the major federal candidates spoke, save for Chuck Grassley, Monica Vernon and Rod Blum (Steve King was first and newsworthy, which I wrote about earlier):

Democrats’ nominee to take on King in Western/Central Iowa gave one of the most polished speeches of the Fair, connecting easily with the audience of mostly supporters. A decent-sized crowd of about 50 gathered for her speech, not bad for a Western Iowa Democrat at the State Fair. Weaver took aim at King several times, slamming him for backing the “TPP” – the “Trump/Pence/Putin” ticket. However, she didn’t make it all about her easy-to-malign opponent, instead focusing on her own personal story and a list of progressive issues she’s advocating.

“I’m a long-term care ombudsman, I work for the Iowa Department on Aging, I protect seniors at nursing homes and assisted living facilities,” Weaver explained. “I finally got fed up when I read about how Steve King wanted to privatize Social Security and voucherize Medicare … We’re an aging state, and as an advocate for people in nursing homes, I know how important those things are for seniors.” 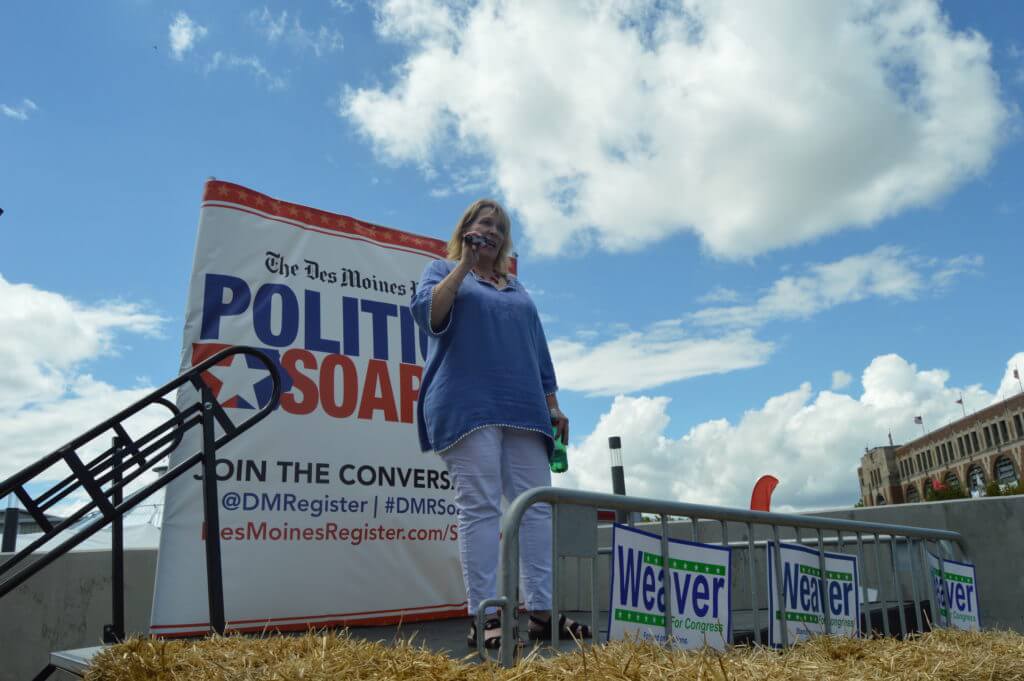 With her daughter in the crowd, Weaver bragged on her kids some, noting one son attended MIT, her daughter goes to medical school and her other son is studying geology at ISU. She compared that success with being a single mother to tie into a point about student loans.

“So I kind of laugh sometimes when I read these articles of how kids of single moms don’t do as well, I think, dang, I wonder how well my kids would have done if I had stayed married,” she said to laughs. “As a single mom, I think about people who struggle to put their kids through college. I believe the next financial crisis is this student loan debt that all our kids are carrying.”

She laid out one of her proposals to address that: expanding the Americorp Vista volunteer program where students would do 4 hours/week of volunteering in exchange for their loan interest and payments being deferred, along with the ability to have some of the loan forgiven.

Weaver also mentioned how she would soon be inducted into the Daughters of the Revolution, joking of how her ancestor’s fight mirrored hers in a way.

Despite running in a deep-red district, Weaver hasn’t strayed away from promoting typically left-leaning policy solutions, and continued that approach at the Soapbox with a call for more industrial hemp farming to address water quality issues.

“It can be planted in marshy areas, it’s very good at mitigating nitrates, as well as because of the roots system it has is, it helps avoid soil erosion,” Weaver suggested. “You can make paper, you can make fabric, all sorts of things from it.” The freshman Republican Congressman’s campaign likes to frame Young as “Everyday David.” Not flashy or firebrand, just a regular Iowan doing honest work in Congress. Unfortunately, this often makes for rather dull speeches. His State Fair oratory was no different, full of pleasant-sounding platitudes. But Young is running more on personal character, even if it’s a low-key one, than on a specific policy or ideological platform.

“I worked for Senator Grassley, but really, I worked for Iowans, right?” Young said to his audience, many wearing green t-shirts with his name on it. “The 3rd District is really awesome, right? I’m very biased. We’ve got 16 counties, I call them the Sweet 16.”

Young then quizzed the crowd on 3rd District facts before explaining which subcommittees he tried to get on, picking strategically to best leverage his influence for Iowa.

He largely avoided any topics that could be construed as political, avoiding the presidential race and not mentioning his opponent, Jim Mowrer. What little in his speech could pass for laying out his position on various issues were mostly limited to vague notions of smaller government.

“As you know, the federal budget is very big, it’s massive,” Young said. “We know the federal government is not a profit-making body, it’s not a private organization. But I tell you what, they sure could borrow from some of the practices, the management practices that you folks practice every day with your own personal budget or small business budget.”

He then went on to talk up his “No Budget, No Pay” legislation, of which he said he’s the only one in Congress actually participating in it.

His focus also turned to more local problems that have hit the district, including a rash of scams targeting senior citizens.

“There are people out there who wake up every morning and want to rip you off,” he warned, explaining how he set up a task force in Congress to address it.

Mowrer’s approach on the Soapbox was night-and-day from Young’s. Mowrer repeatedly made a specific case for his candidacy, laid out the reasons for why Young is wrong and forcefully contrasted issues in the race. But first, as with all the candidates, Mowrer talked up his fond memories from the fairgrounds.

“I’ve shown a lot of pigs here at the State Fair, and I was proud to win the Madison County Celebrity Swine Show a few weeks ago,” Mowrer joked.

Along with his usual stump speech that highlights his rural upbringing, how Social Security survivor benefits saved his family, his Army service and work at the Pentagon, Mowrer also added in a part about a fellow solider being sworn in as a new American citizen while serving with him in Iraq. 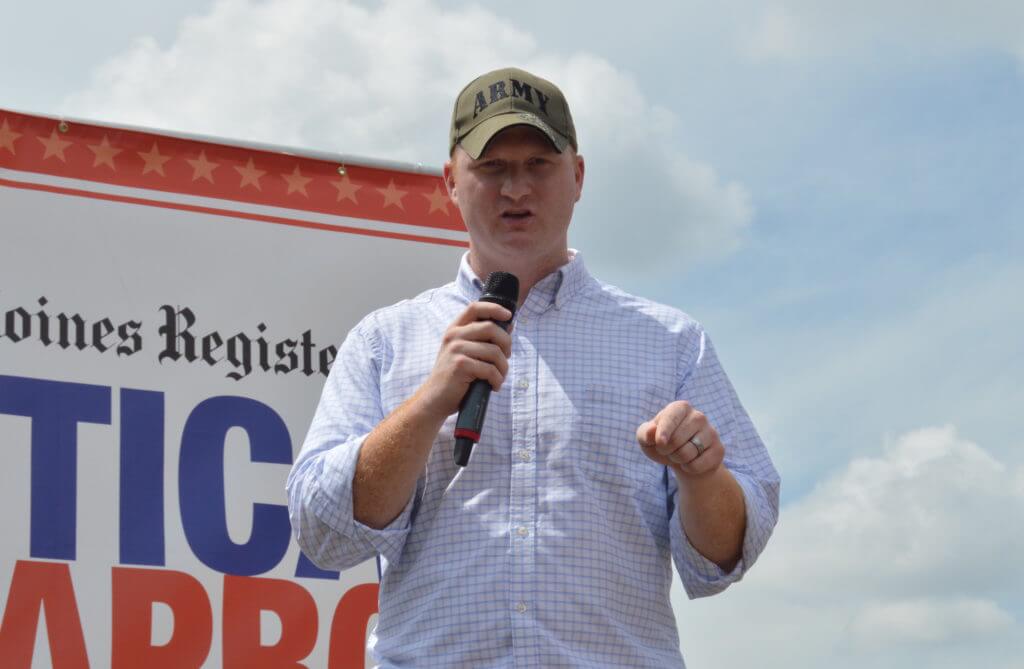 Mowrer then turned his sights specifically on his opponent, attacking Young both on your usual anti-incumbent topics, but also on things like Planned Parenthood funding, which bring with it more partisan allegiances.

“Right now we have a Representative, David Young, who broke nearly every promise he made in 2014. He voted four times to defund Planned Parenthood,”  “He was one of only 64 members of Congress to vote against the bipartisan Highway Bill.”

Parts of the 3rd District are looking particularly bleak for Donald Trump, who’s struggling with support from suburban swing and Republican-leaning voters. Mowrer made sure to tie Young repeatedly to the unpopular top-of-ticket nominee.

Also of note: Mowrer repeated the phrase “ladies and gentlemen” about 15 times during his speech.

The former Lt. Governor took the stage on the first Sunday, armed with some sharper, direct hits on Chuck Grassley. Occasionally using notecards in her hands, Judge challenged Grassley on the Supreme Court nominations and in Congress’ inability to act in general. It seemed like a more focused delivery from Judge and an improvement as she heads into the final stretch. A few other observers thought it was a so-so speech, but I thought she was getting back to her feisty campaign form of her previous statewide runs.

“We’ve got to quit the politics and start finding solutions,” Judge said after criticizing Congress for failing to act on Zika. “We cannot count on Chuck Grassley to do his job any longer. And he’s been avoiding us. He chose to not stand up here in front of you at the Soapbox.” 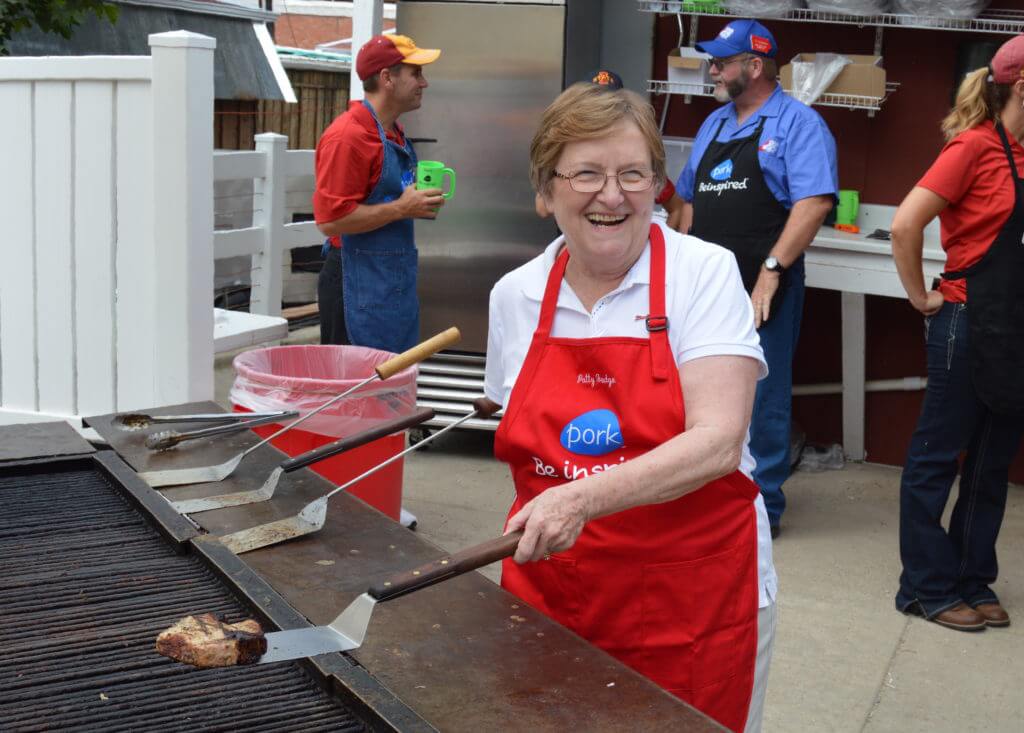 Grassley chose not participate in the Soapbox speeches, though he did tour the Fair himself. His avoidance of public meetings and events in Iowa’s largest counties has become a point of contention in recent weeks.

“The obstruction that’s going on in the United States Senate has to end, and it has to end with this election,” Judge said. “If Chuck Grassley can’t do the job, let me tell you, I will do the job.”

Judge, who is viewed suspiciously by some on the left in Iowa, also laid out some rather progressive policy proposals, including tutition-free two-year community college, a $15/hour minimum wage and lifting the cap on Social Security payments.

“This is the message I want to send him today: If you choose to put political party before the interest of Iowa families, we do notice,” she concluded. “We will together take action.”

Afterward, Judge headed over to the Pork Tent, where she met Bachelor star Chris Soules. They flipped a few pork chops together. Soules has been spotted at a number of political events in Iowa. When asked by Starting Line whether he’d consider running for office, Soules replied, “Maybe some day … I wouldnt rule it out. Im not much of a politician. I like to tell the truth.” 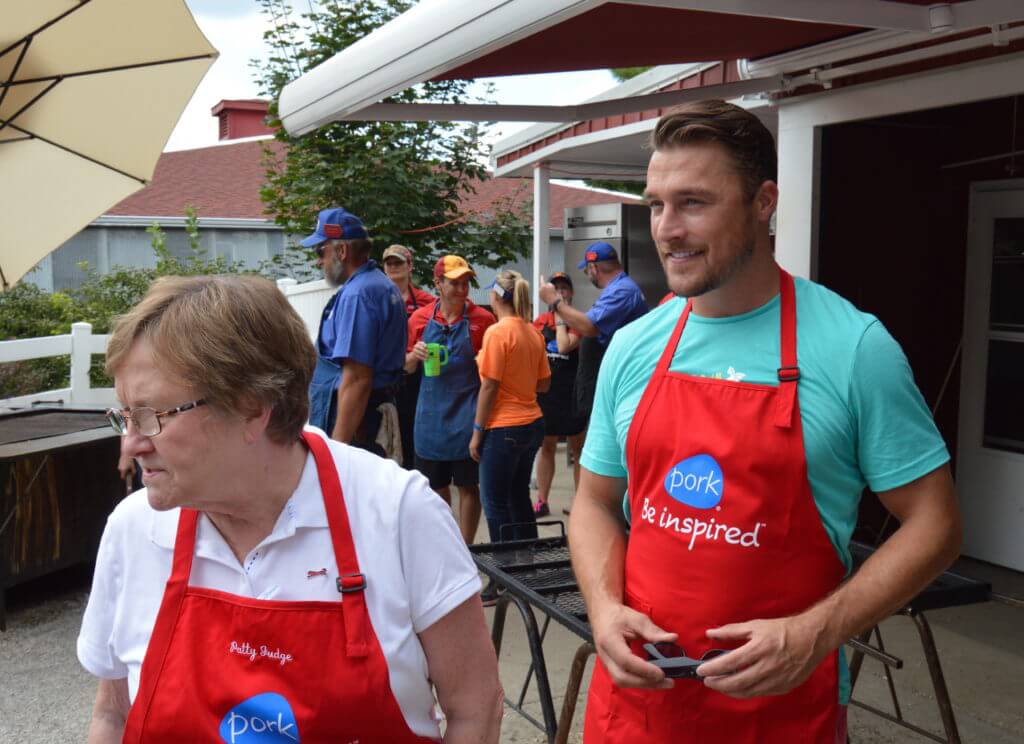 The five-term incumbent and last federal Democrat standing in Iowa started his speech with a biographical focus, talking about his upbringing in a single-mother household in Sioux City and his first job at a sewage plant funded by a federal jobs program for disadvantaged youth. Loebsack enjoys a relatively easy reelection this year against a Libertarian-turned-Republican candidate (whose appearance I missed), and played it relatively safe with a well-delivered speech.

Loebsack framed his pitch in a sort of non-threatening sounding progressive agenda with a focus on middle class jobs, personally responsibility, an avoidance of adding to the national debt and an ability to work in a bipartisan manner. 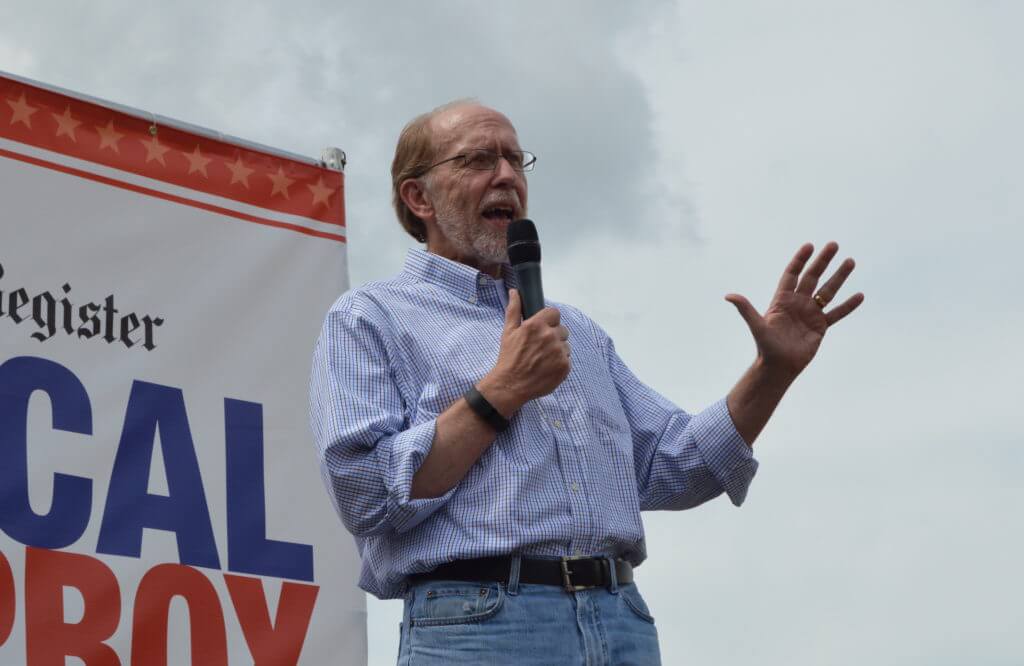 To accomplish his economic goals, Loebsack focused on infrastructure spending for jobs that can’t be shipped overseas and rural broadband internet. He painted a nice visual image of his work on getting high-speed internet in nursing homes so that grandparents “can do Facetime with their kids and their grandkids.”

Finally, he criticized the nastiness of the current political season, recalling how in 2006 he didn’t say anything negative about Republican Jim Leach, who he defeated.

“Enough is enough, enough of this partisan nonsense,” Loebsack said. “Yes, I’m a Democrat. Yes, I want more Democrats in office because I think Democrats do better for the middle class … When I go back in January of next year, I’m going to work with folks on the other side of the aisle.”