Iowa Republicans got into the full spirit of Halloween this weekend, with a number of activists donning some creative and creepy outfits at two recent events. Rand Paul held a Halloween costume party in the back room of Buzzard Billy’s in Des Moines on Friday night, which ended up being perhaps the strangest Iowa Caucus event Starting Line has attended this year (and that’s saying something!). Then on Saturday the Republican Party of Iowa held their big Growth And Opportunity event at the State Fair. 10 candidates attended and all the campaigns decorated booths in the Halloween theme. Here’s our favorite photos from the two events.

So this is how you run for President of the United States. Judging a costume contest with about 50 attendees in a Des Moines bar. That’s how Rand Paul spent his Friday night. He gave no speech and simply mingled with the costumed crowd for about an hour, starting off by doing a personal photo with every attendee (a staple of Paul’s Iowa events).

Paul himself dressed as the spookiest thing he could imagine: the national debt. 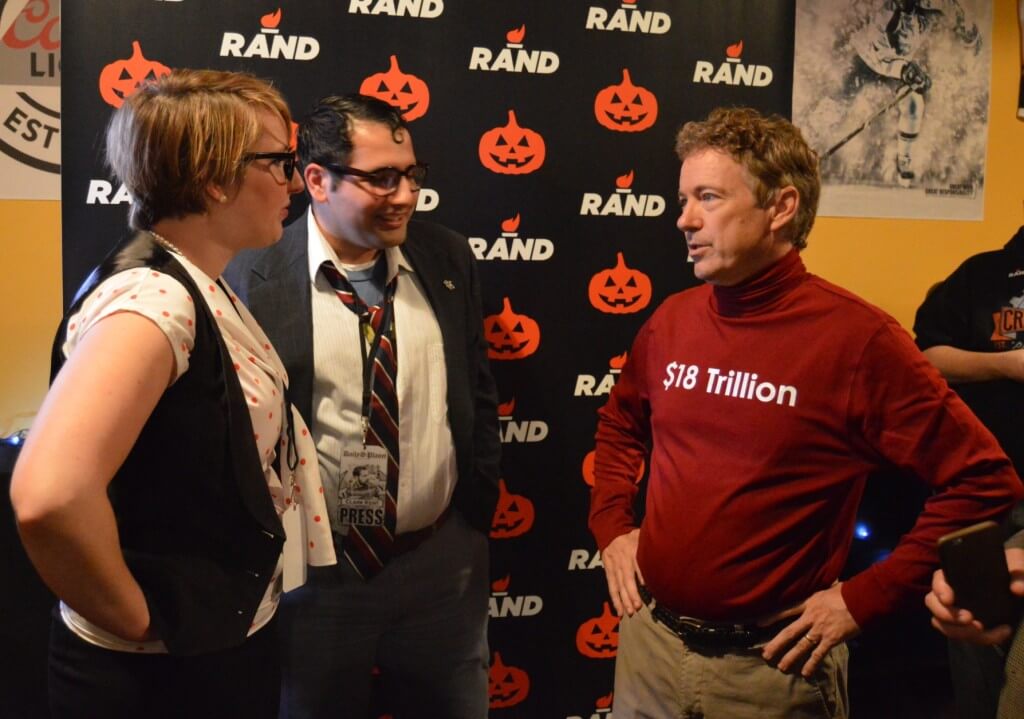 Several attendees came in rather creative costumes, like this State of Liberty lady, brutally stabbed by “The Washington Establishment.” 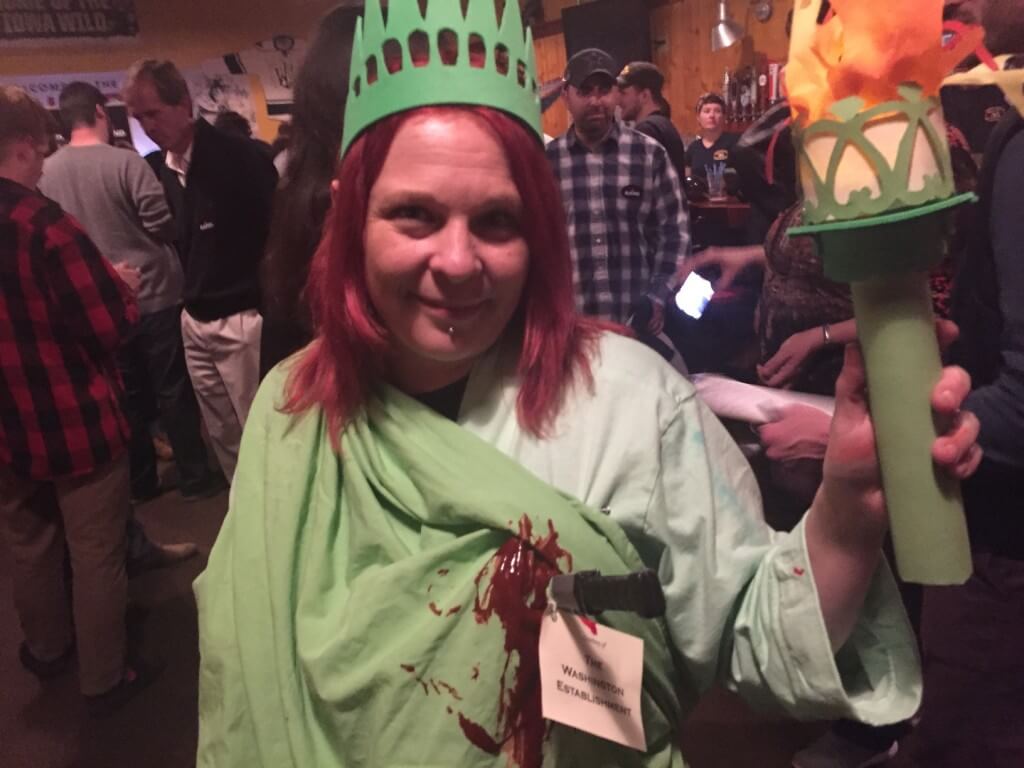 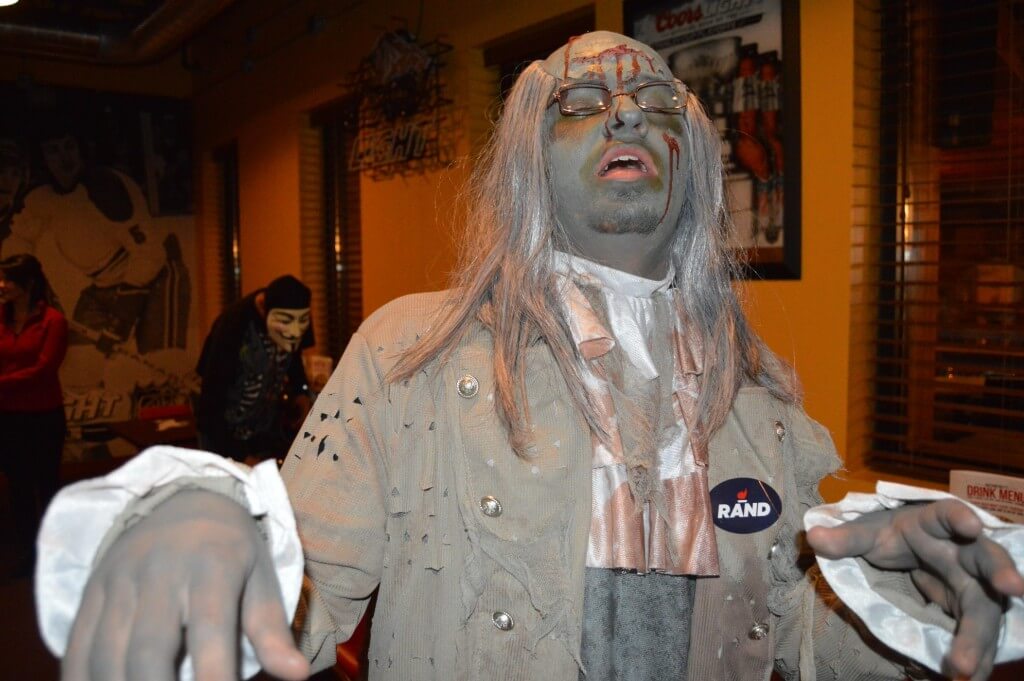 This guy was an Obamacare doctor. 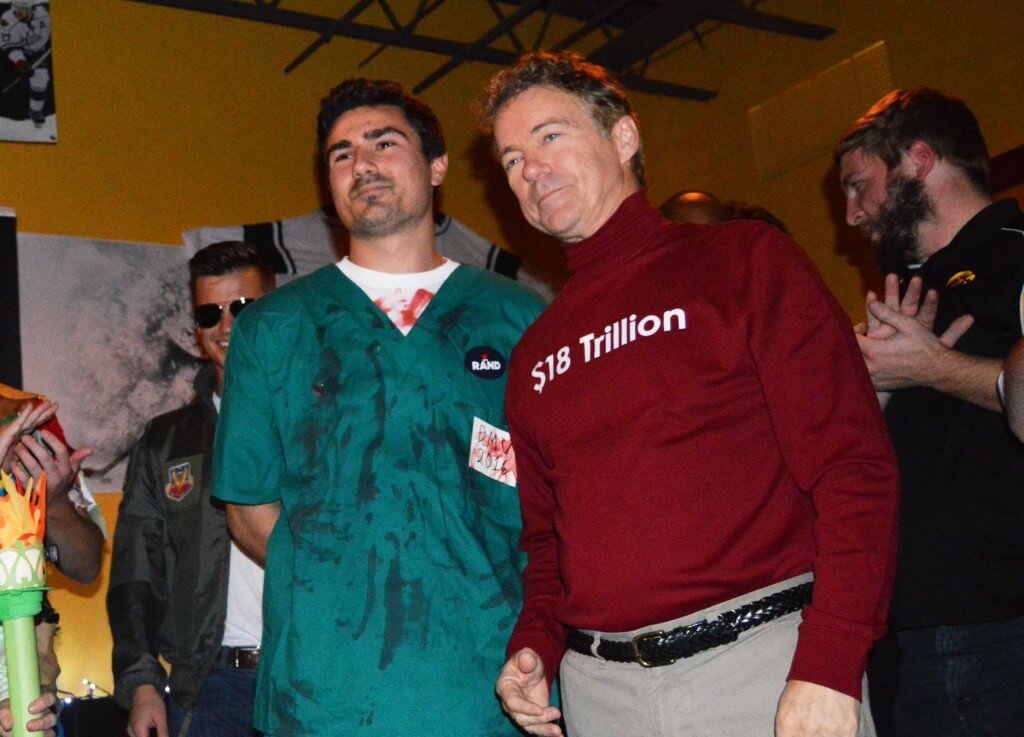 Here’s Pancho Villa, who the crowd cheered for when he declared, “I’m a revolutionary!” Here’s Paul with two Clark Kents/Supermans. Dangerous for this Republican, considering Clark Kent was part of the liberal media. 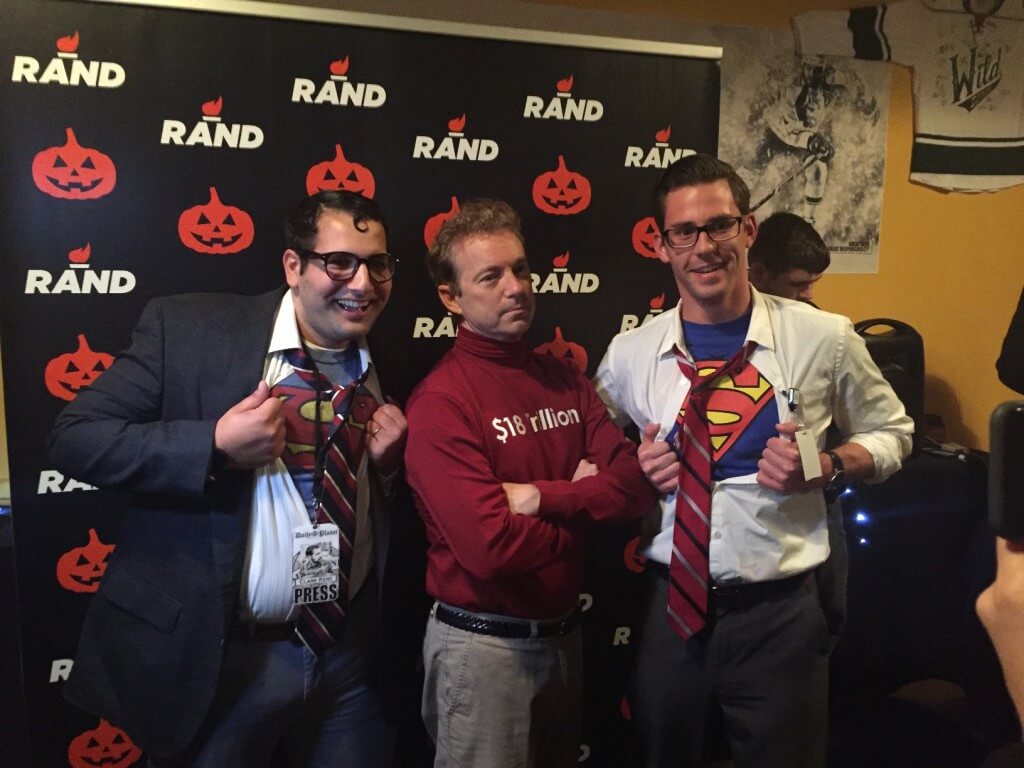 Steve Grubbs, Paul’s chief strategist in Iowa dressed up as his boss, signature turtle neck and all. 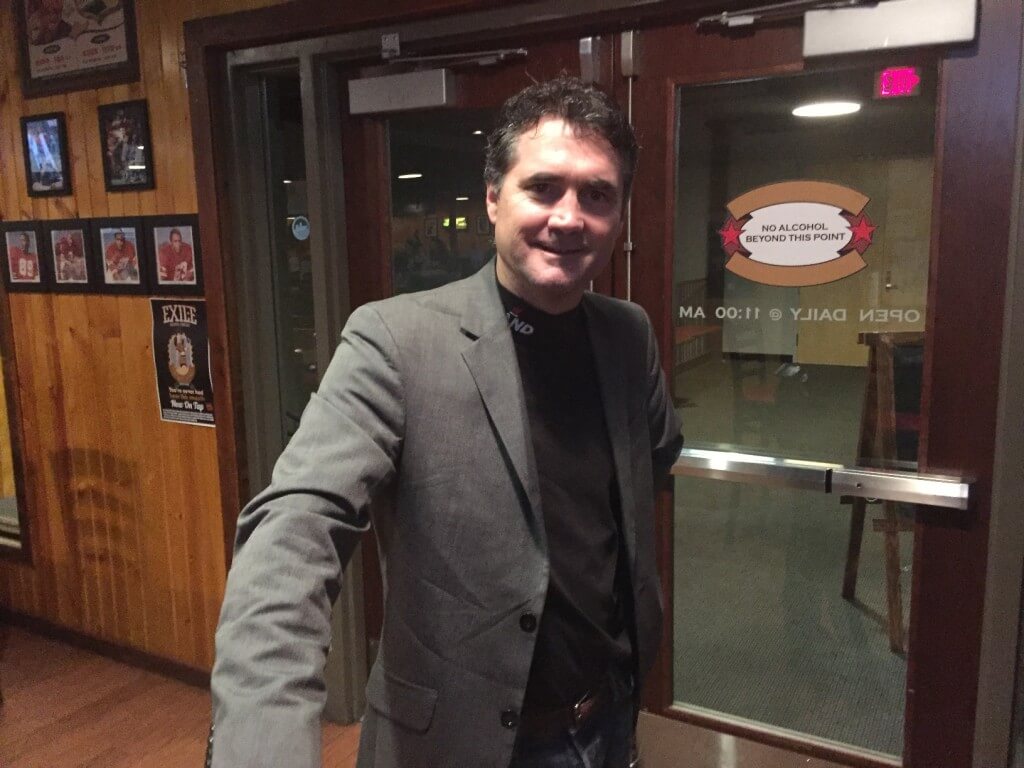 Paul poses with all the costume contestants. “So this is who my supporters are?” you have to imagine him wondering. 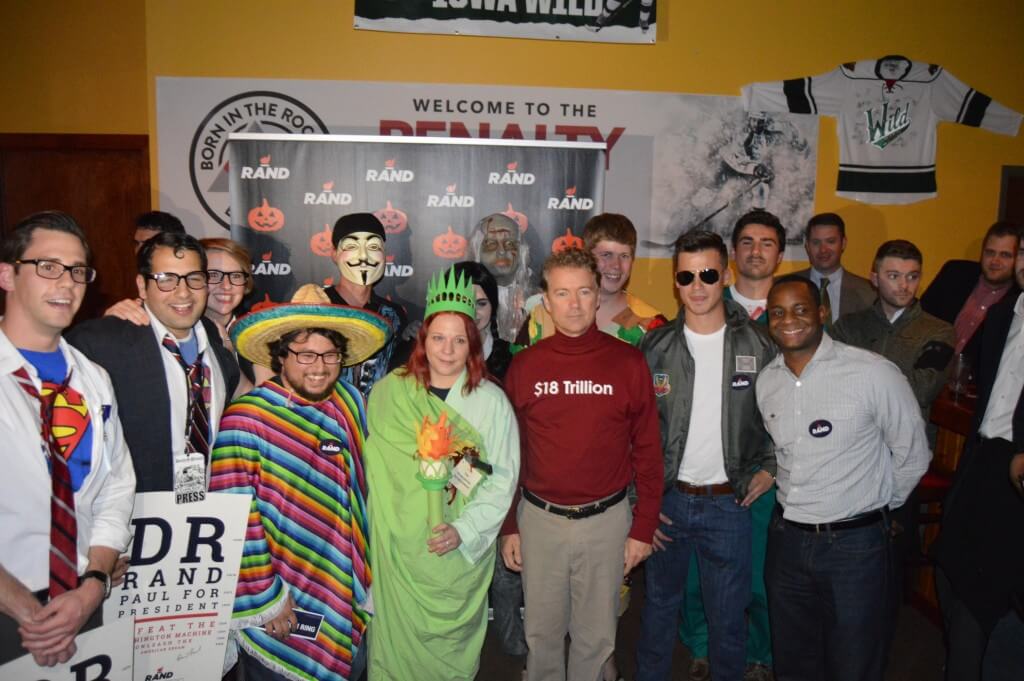 Paul personally gave out the prizes after each stood before the crowd to be judged. A guy in a Jedi outfit won first place, probably for saying he was a “defender of the Republic.” The Statue of Liberty lady got robbed in my opinion, but she got this sweet “Don’t Drone Me, Bro!” t-shirt. And that’s how you campaign in Iowa! Seriously, this was the oddest event I’ve been to on the caucus trail. It was pretty entertaining event, though, and gave everyone a chance to interact with Paul in a different type of setting. Paul had his typical bored look on his face for most of the night, but I think he was having fun. It’s nice to do something different than a speech and Q&A once in a while.

The hashtag for the event was #GOParty, as RPI tried to play up the fun aspect of listening to 10 presidential candidates on Halloween Saturday. The campaigns gamely played along with a couple fun booths, and some people brought their kids in costumes.

At Rick Santorum’s booth you could get a picture in front of a White House backdrop with Abraham Lincoln. They also had a few masks of former presidents you could use as well. 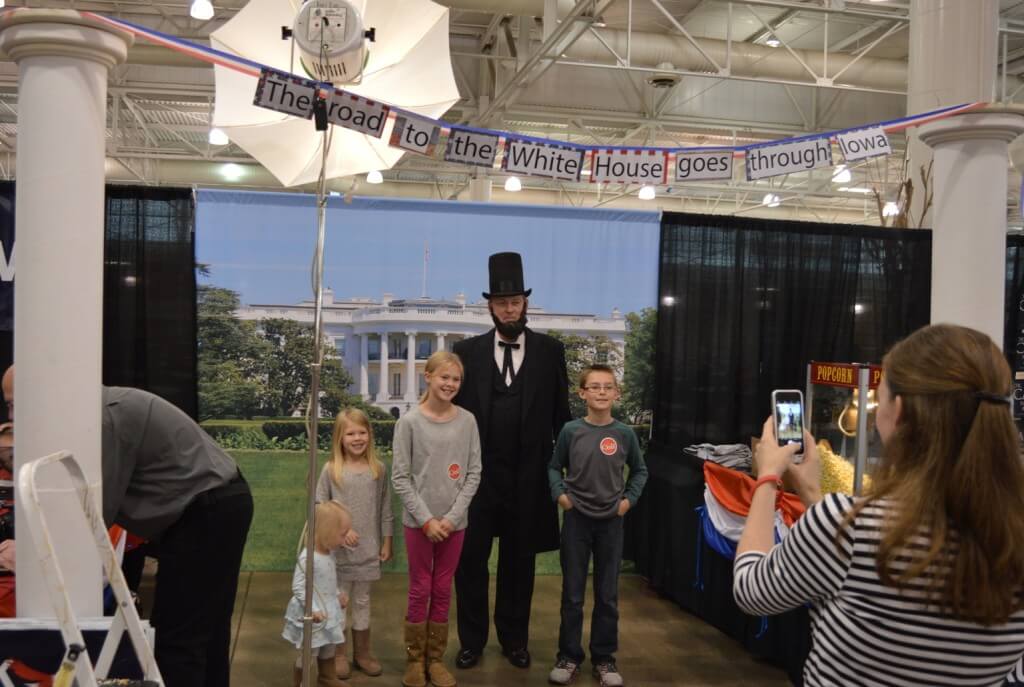 Ben Carson was one of the few no-shows at the multi-candidate event, but his campaign was well-represented, dressing as surgeons. The Ted Cruz campaign hosted a Common Core house of horrors, complete with zombies eager to pose for the cameras. Lindsey Graham posed with some children who dressed up for the event. 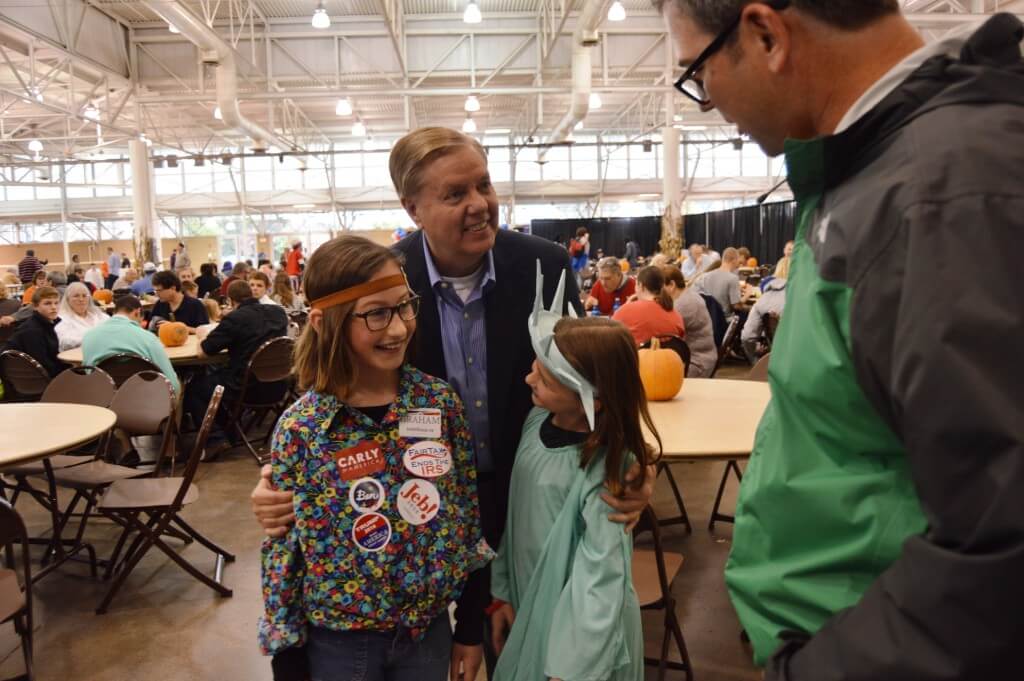 This guy brought his own, uh, unique companion to the event. I’ve seen him out at a couple events with this. This isn’t a costume, but I appreciated the spectacle of having huge Chris Christie heads at the event. Supporters held them during his speech, and followed him with it afterwards as he walked around. 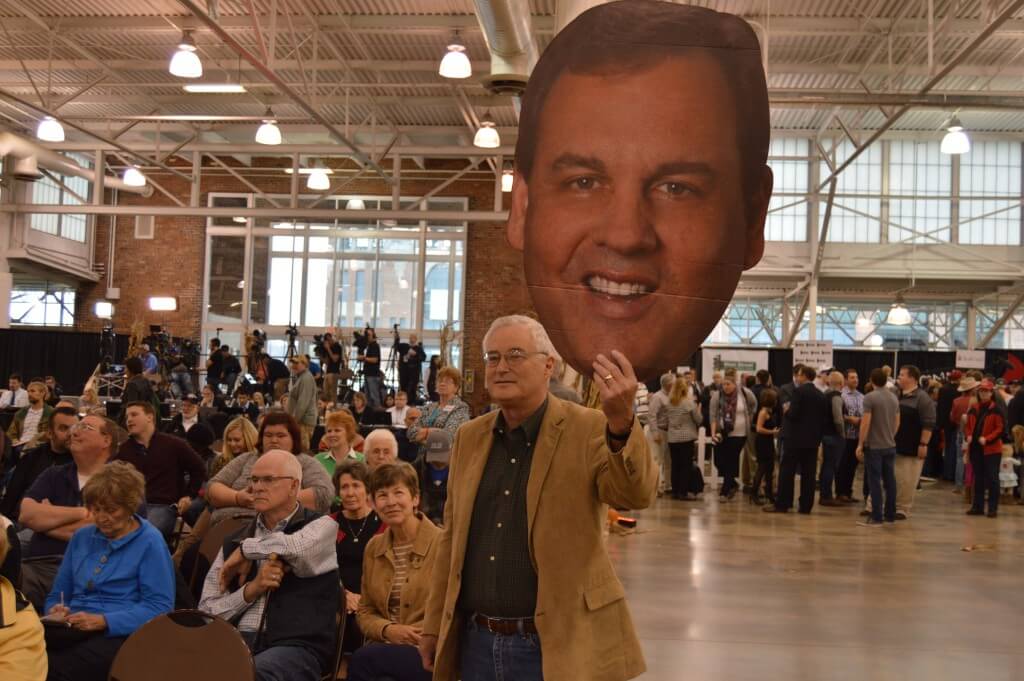 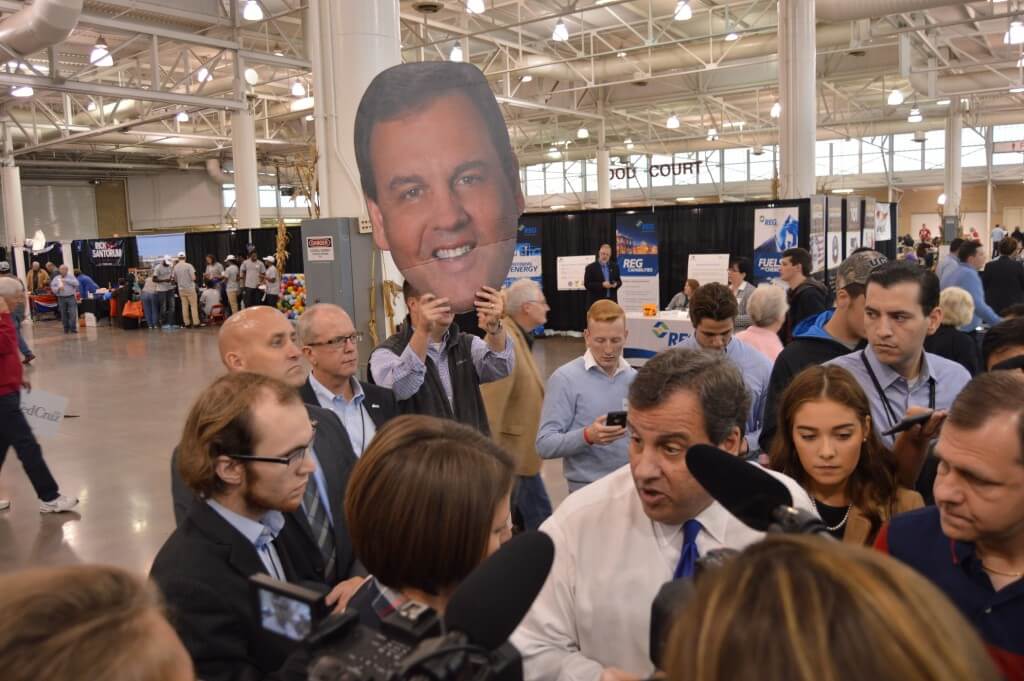 And finally, I just thought I’d add in this shot. A Republican political event in Iowa? Better have a Flag Tractor! 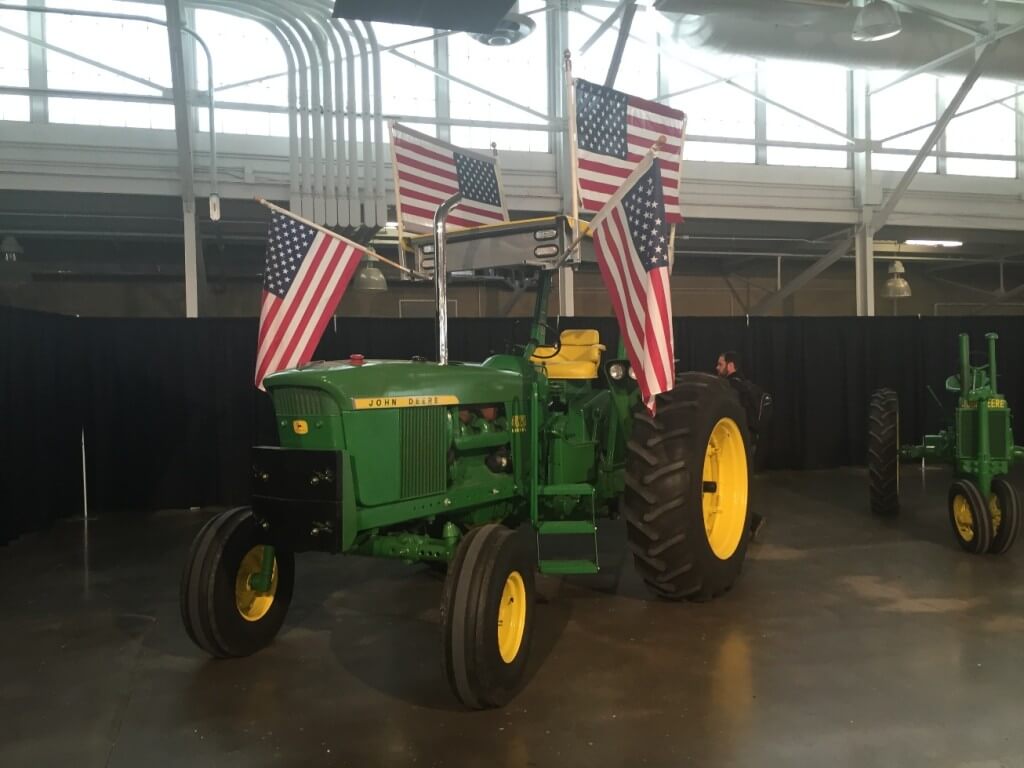 We’ll have full analysis of the Growth And Opportunity event posted later today.