Now before I come off too critical, I actually think the large “family fun” events are a great idea. At first glance the spectacle may seem like a highly-questionable use of campaign funds, but once you mingle with the families there you realize it’s a smart way to engage voters in a different manner. Only so many caucus-goers want to attend three events a week where some candidate speaks for 20 minutes, then does a 30 minute Q&A. This was a chance to bring out the whole family and have some fun with your dose of politics.

Especially when there’s 16 other Republican candidates, holding creative, fun events is important. Doubly so for someone like Carson who appeals in part to the more evangelical sort, many of which have young families. It certainly cost a significant amount of money (and he’s holding several of these types of events across the state), but there’s only so much TV ads are going to do for you in this large a field. Still, certain expenses probably could have been avoided.

Here’s a look at the event:

The first thing you noticed was the flag so massive it could block out the sun: 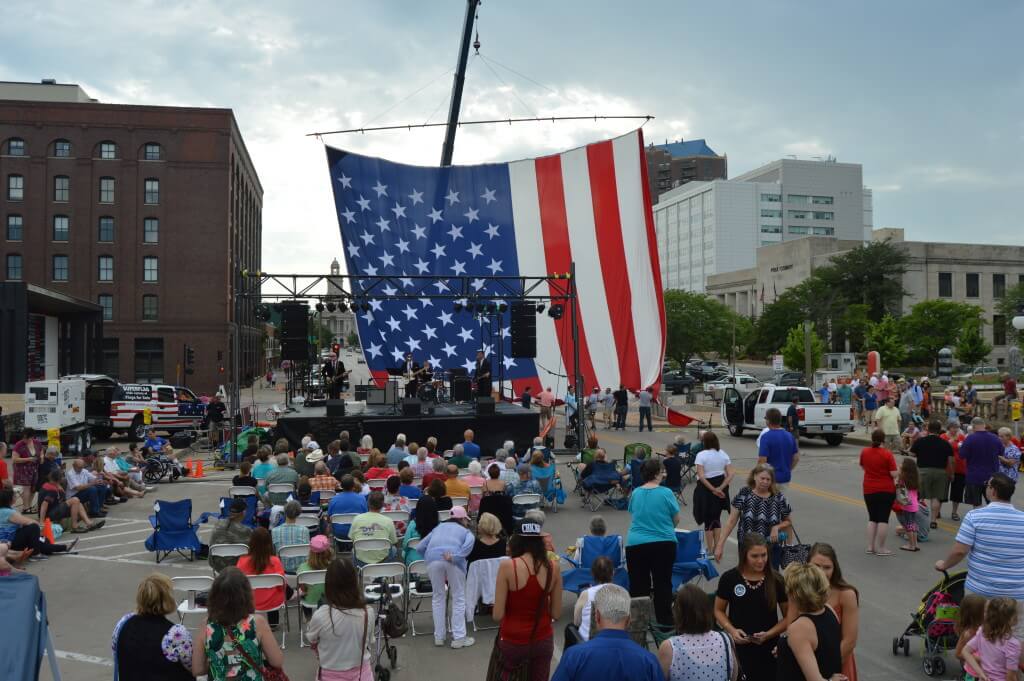 Unfortunately, due to the wind, they couldn’t hoist the flag all the way up. So instead people had to hold onto the bottom of it to keep it from touching the ground/blowing all over the place. People held it for over two hours, and the campaign asked the crowd for volunteers to swap people in and out. At times the wind pushed it and the holders around so much I got worried for their safety. 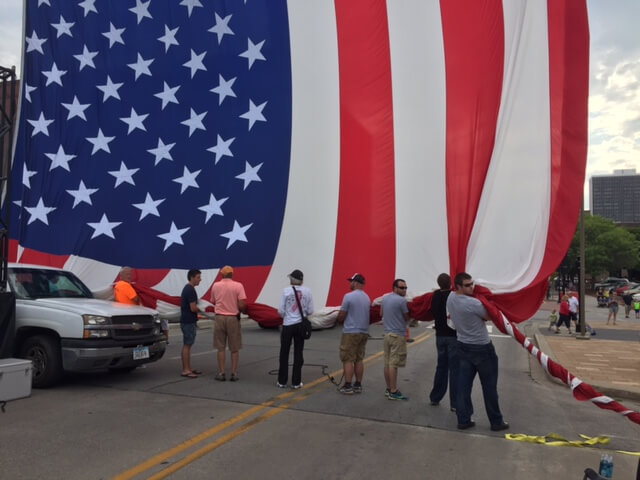 This was definitely something they could have cut back on. I’m guessing someone on the campaign said, “I want us to have the biggest flag in the country behind us!” The company named Super Flag that provided it was from Long Beach, California, and they drove all the way out to Iowa just for this. I can only imagine how much the crane cost too. A much more reasonable flag would have sufficed – you wouldn’t have even been able to get the flag in one camera shot if it was completely unfurled. 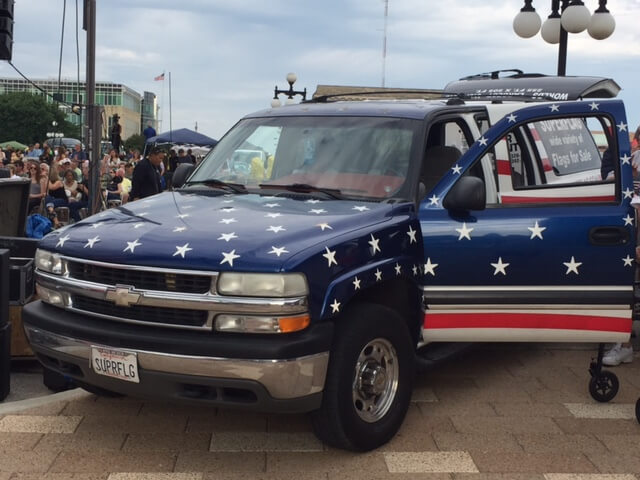 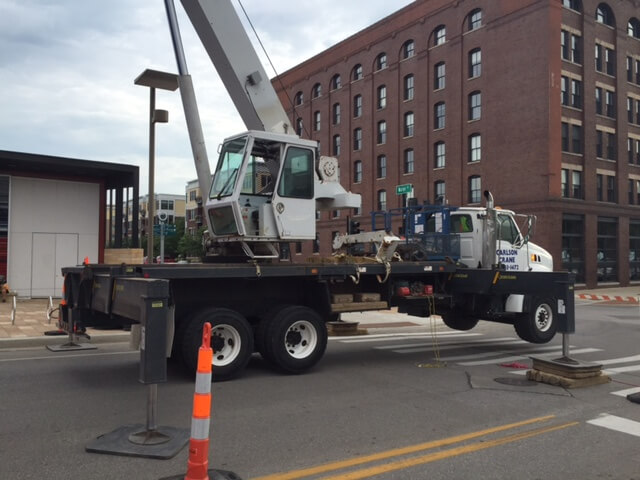 Now to the family fun stuff. There were four actresses dressed up as Disney characters: 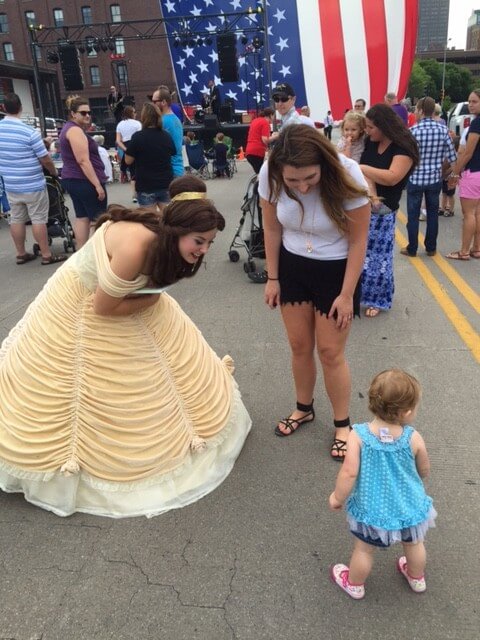 An Uncle Sam on stilts (who kind of looked like the guy who dressed up as Thomas Jefferson at another Republican event): A children’s musician entertained the young ones after the main speech: In the back there was a petting zoo: 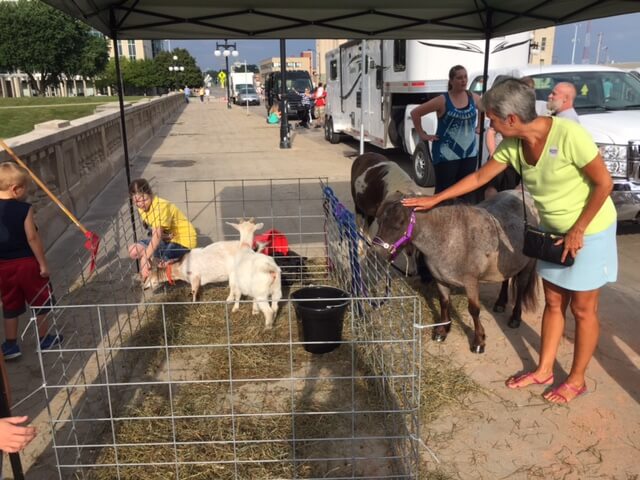 Plus face painting and balloon animals: 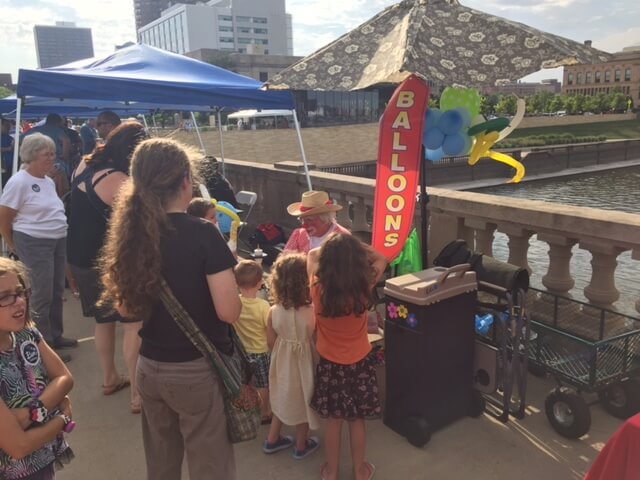 And a tractor trailer with video games to play for free: 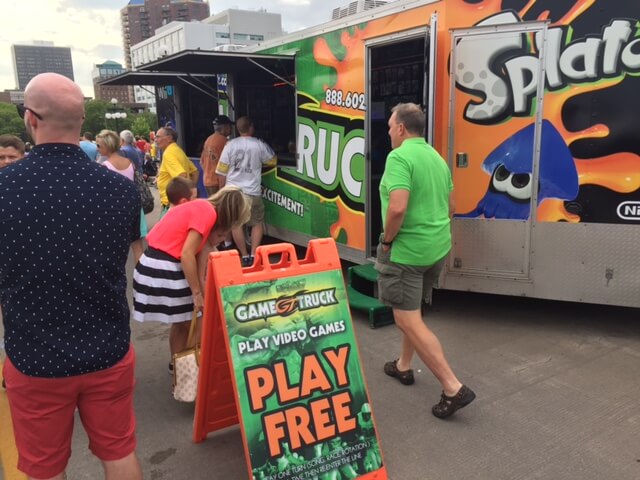 There was a bit of an issue towing cars off the bridge that hadn’t heeded the no-parking signs the day before. This Carson event literally took over an entire downtown Des Moines bridge, like many of the festivals do: 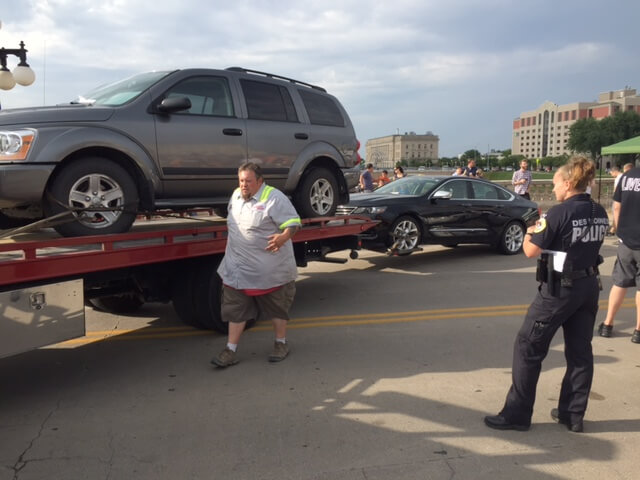 A number of local vendors were selling food, giving it the feel of a downtown festival. 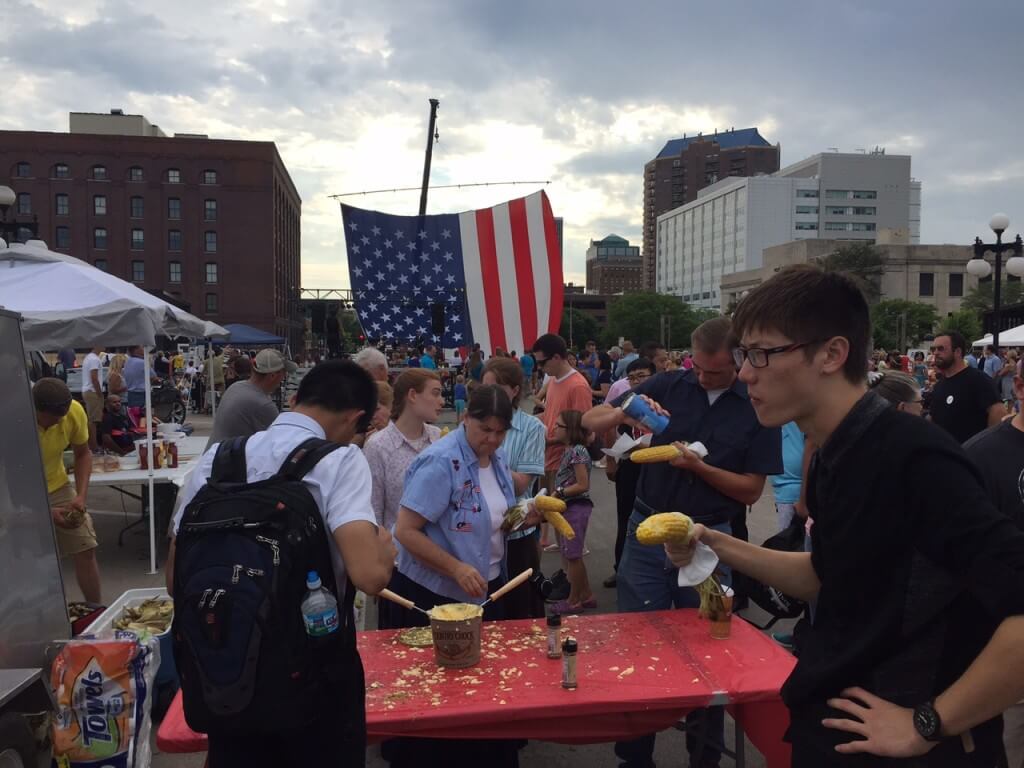 On stage before Carson spoke was a local band. The national anthem was sung by a well-known contestant from The Voice (or I assume well-known, I don’t watch it, but many people around me nodded their heads when he was introduced). 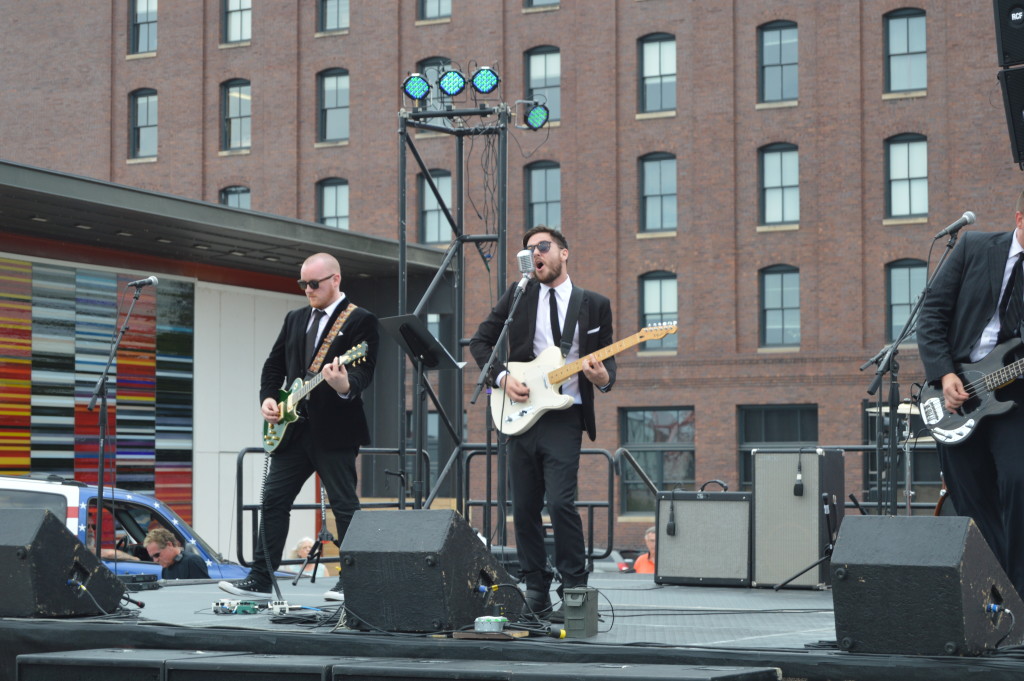 Carson, after arriving in his campaign bus, took the stage and spoke for about 45 minutes. I haven’t really understood the Carson appeal the same way I do other Republicans, but it started to become more clear last night. Sure, his speech kind of rambles around and doesn’t have a clear focus. He’ll jump from recalling being called dumb in school one moment to touching on police brutality/the need to respect them the next to the need for national unity in the next breath. But what comes through more than anything is his likable, joking and warm personality. Some of his policy points and plans left something to be desired for those wanting more substance, but to the friendly crowd that was there, Carson came off as a candidate you’d want to caucus for. 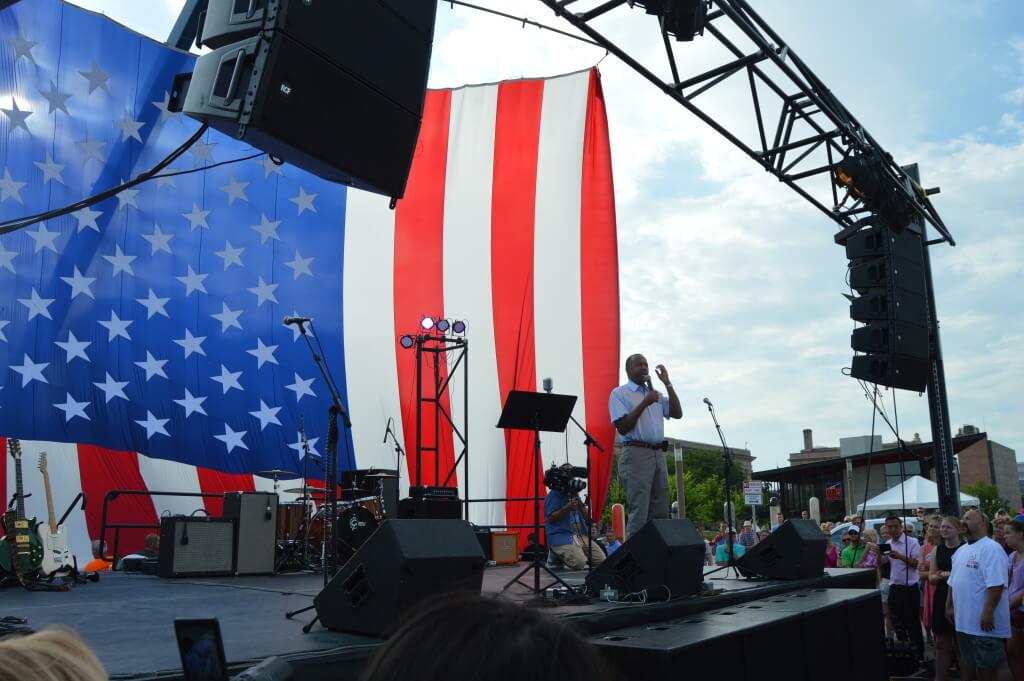 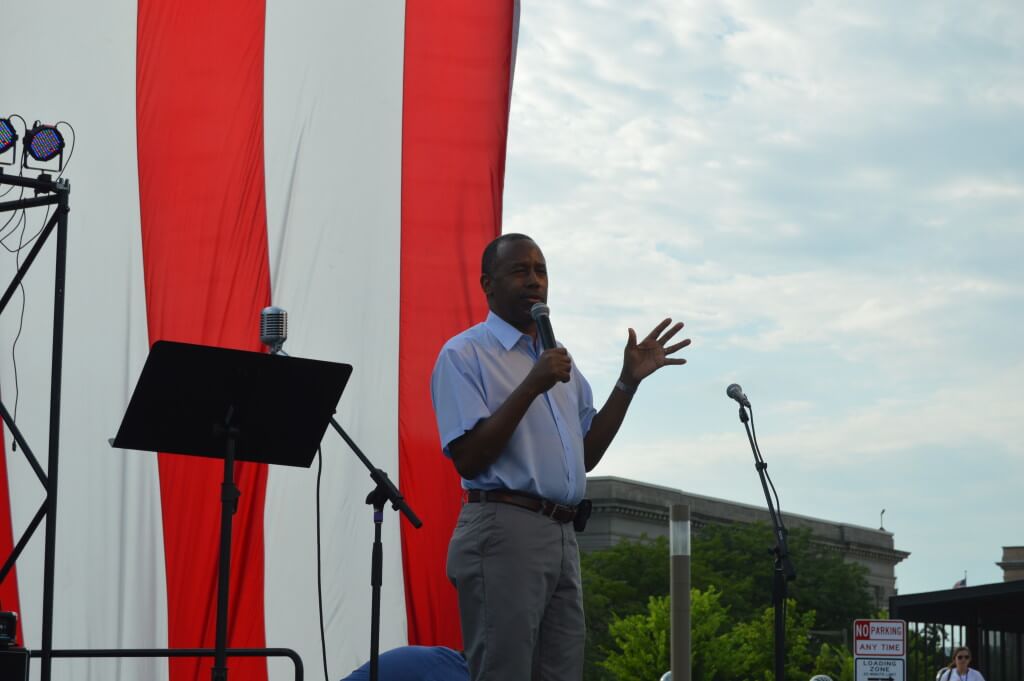 However, as I’ve written before, beware the candidate with a fancy campaign bus. And Ben Carson has the biggest one I’ve ever seen. In fact, he pointed out it’s Maya Aneglou’s old tour bus (who I was not aware had one, but did). These things, especially ones of these size, are an unnecessary expense. Maybe you rent a bus and put your logo wrap on it for a multi-day tour, but a full time monstrosity such as this one isn’t needed. And here’s why it can be a red flag: the types of candidates who buy these things are the ones who jump into running for President and think, “okay, what’s running for President like? Well, on TV they make big speeches, have big moments in debates, and ride around in big campaign buses.” (I added up how much Leslie Knope spent on this stuff in a fun post.) Those kind of candidates don’t always realize the grueling work of an actual campaign is much more than the made-for-TV moments. And I would seriously question a candidate who claims to be a fiscal conservative yet feels the need to travel around in a luxurious campaign bus. 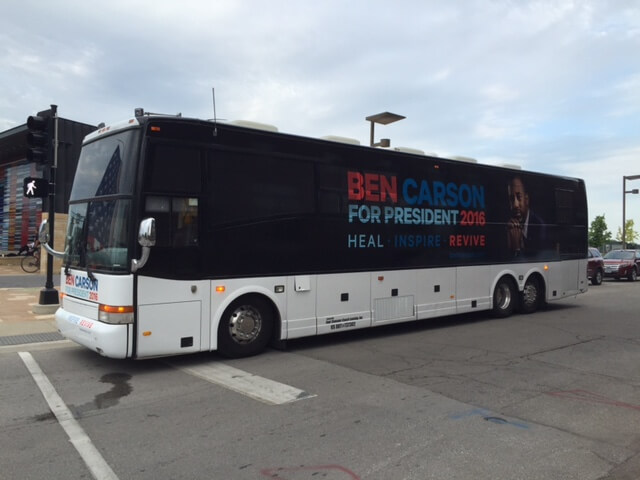 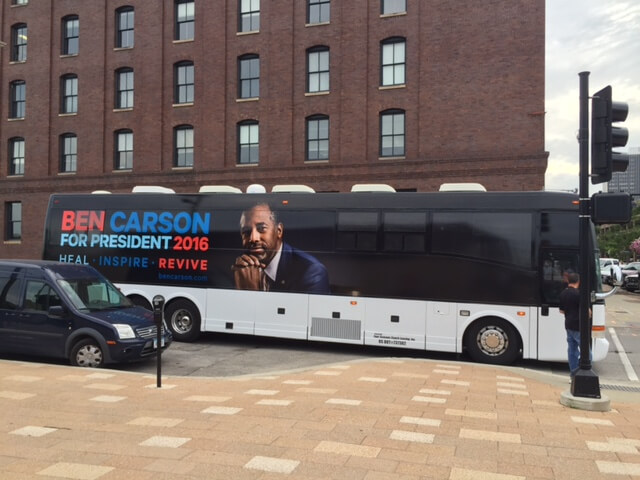 Sadly, the press was not allowed in. “You can look at it from the outside,” Carson replied to me during a press conference when I asked if we could take a look. (I asked him about actual policy stuff too. He was talking about the need to reduce our dependence on foreign oil, so I asked if that included extending the Renewable Fuel Standard. “Absolutely,” he replied.) 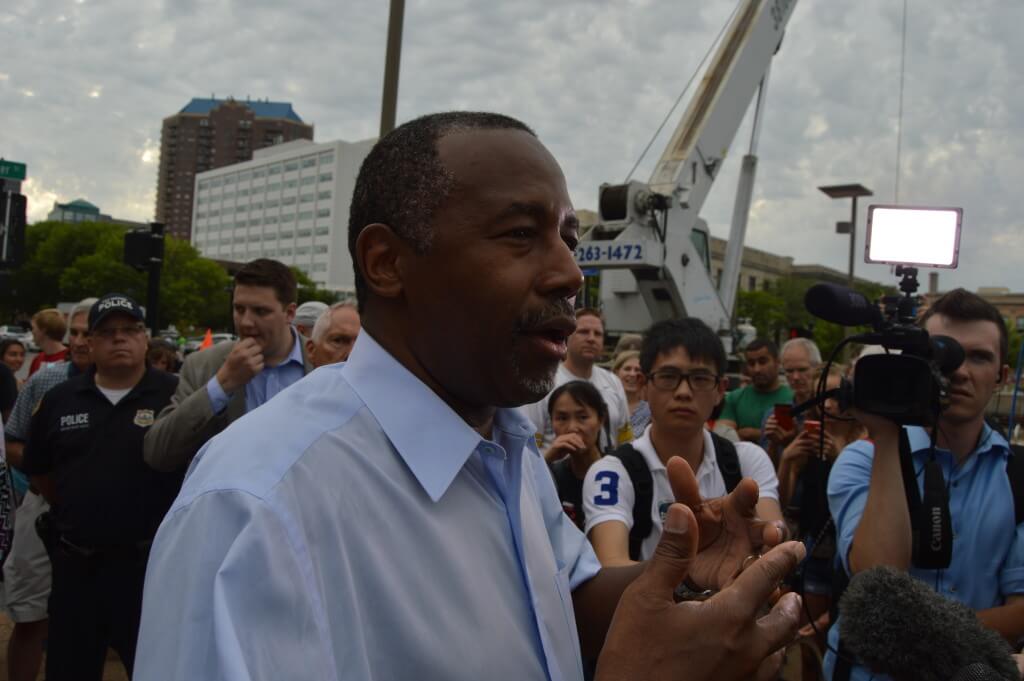 So what was missing from the event? Well, the biggest thing lacking was an army of volunteers asking every person who walked onto the bridge to sign up their name, address, phone number and email. There was a tent where you could sign up on iPads (more unnecessary expenses) to help the campaign. But they could have gotten everyone’s information had they stationed volunteers/staff at the entrances and exits (of which there were few – it was a bridge, after all). Still, a long line of people waited to sign up, so they probably got the people who wanted to volunteer.

And all in all, the event was a big success. The campaign said they had over 2,000 attendees. I estimated more around 1,300 to 1,500, but either way that’s really good. I believe it’s the best attended single-candidate event for the Republicans so far in Iowa. Too pricey for what it’s worth? Maybe. But if you’ve got the money, may as well spend on something different that will help you break through from the huge GOP field. I enjoyed myself, anyway. I wouldn’t mind attending a few more of these before the Iowa Caucus rolls around.