It was a pleasant, laid-back setting on a warm afternoon in State Senator Liz Mathis’ backyard, where about 125 local Democrats sat around folding picnic tables to listen to Hillary Clinton speak. The day was a sleepier affair than some of the recent Iowa events held by other candidates, but not every Iowa Caucus event features high-flying rhetoric, breaking news or rowdy crowds. And it’s the combination of small, more intimate gatherings like these that slowly fill a candidate’s corner on caucus night.

Clinton discussed a wide range of topics in Mathis’ yard in Robins, much as she did at an earlier event in Newton, but often returned to topics affecting children and families. That was likely intentional as Mathis works at Four Oaks, a child welfare and juvenile justice center.

“I think we should listen to teachers more than we currently have been about what works and what will make a difference for our kids,” Clinton told the crowd, speaking in a voice made raspy by several long days in a row of campaigning. “We have a lot of research about this, we should start paying attention to it. And we should empower our teachers to actually do what they know will light that spark of learning. But their job and our outcomes will be better if we invest in early childhood education and universal pre-kindergarten.”

She emphasized the biggest the reason to invest now in education is to ensure America is well-positioned to be competitive for jobs and growth. And she cited the early childhood studies that show the amount of brain development that occurs in a child’s first five years. 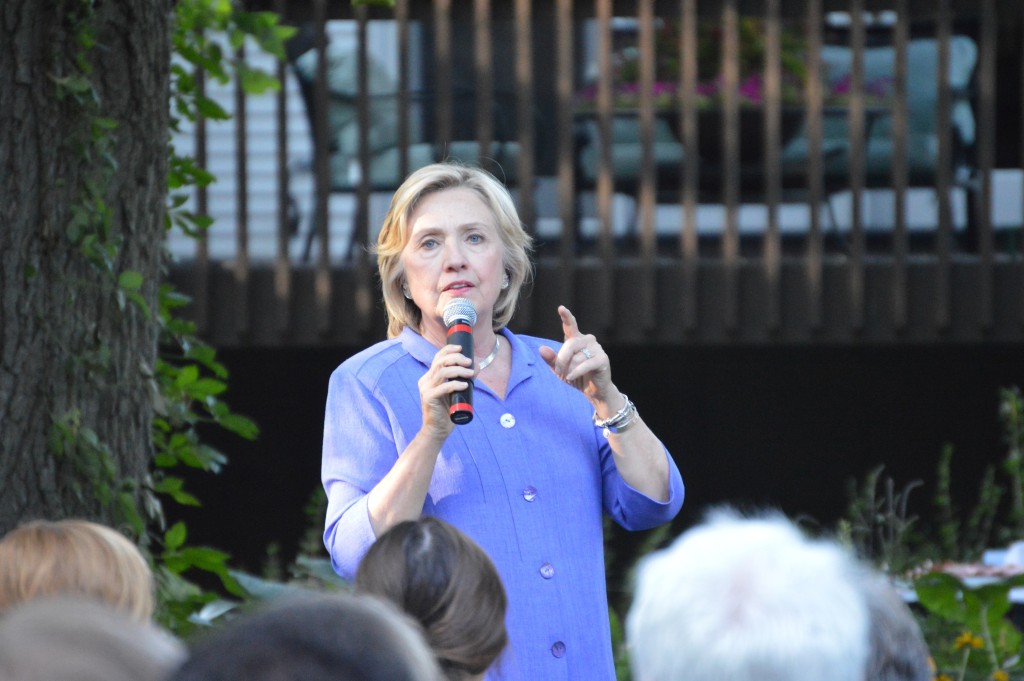 “I want to help people refinance their debts,” Clinton said, turning to college affordability. “Too many kids, and I’ve met them in Iowa, they can’t move out of their parent’s house, they can’t change jobs or even start a business. They can’t get married because they have such a heavy student debt load. So we’re going to re-finance it. We’re going to get more young people into a program where they can pay a percentage of their income as opposed to a flat rate with a high interest rate … And if you do public service, you will get an even better rate.”

On mental health issues, she again criticized Governor Terry Branstad’s closure of the Clarinda and Mt. Pleasant facilities, and recounted a story of a woman she met in New Hampshire who is caring for both her husband and mother who has Alzheimer’s.

“We’ve got to look at Alzheimer’s or Autism, where it’s a life-long commitment,” Clinton said. “What happens when they get older? You’ve got to make sure you have the support that you need.”

“What I as President will do is everything I can to make sure … [that] you should not have to be the granddaughter of a former President or former Secretary of State to have every opportunity to go as far as your hard work and talent will take you,” Clinton concluded her speech with. “You should be able to be the granddaughter of a factory worker, like I am, or the grandson of a food service worker and have just the same opportunity in America.”

Mathis, one of Clinton’s high-profile endorsers in the state, appreciated the focus on family issues.

Of those in attendance at the backyard picnic, Mathis says about 3/4 were Clinton backers she hoped to get even more motivated, and about 1/4 were undecided who could be swayed by seeing her in person.

“It was the other quarter that I knew I could move the needle on,” Mathis said. “They were open and amenable to hearing more from her and supporting her, and I asked a couple of those people afterwards and they’re all in.”