The sun had begun to drop behind a picturesque Iowa cornfield as Bernie Sanders took to the stage at a rally in Burlington on Thursday. By the time he was finished, it was pitch black outside.

His voice turned scratchy by the end of the day, and his Brooklyn accent got thicker as the night went on, shouting out multiple “yuge,” “speechers,” and “agenders.” The microphone went out at one point, and sweat marks that began as small circles on his chest eventually drenched his entire shirt on the incredibly muggy night. None of it seemed to have any effect on his enthusiasm, as he gave one one his most amped-up stem-winders for well over an hour.

The crowd certainly helped, over 500 in all, a turnout local Democrats said was larger than any Iowa Caucus event they’ve had this early in a cycle. They had placed 400 white folding chairs on the dirt-caked concrete floor at the local county fairgrounds, a location switch made necessary by the number of RSVPs. 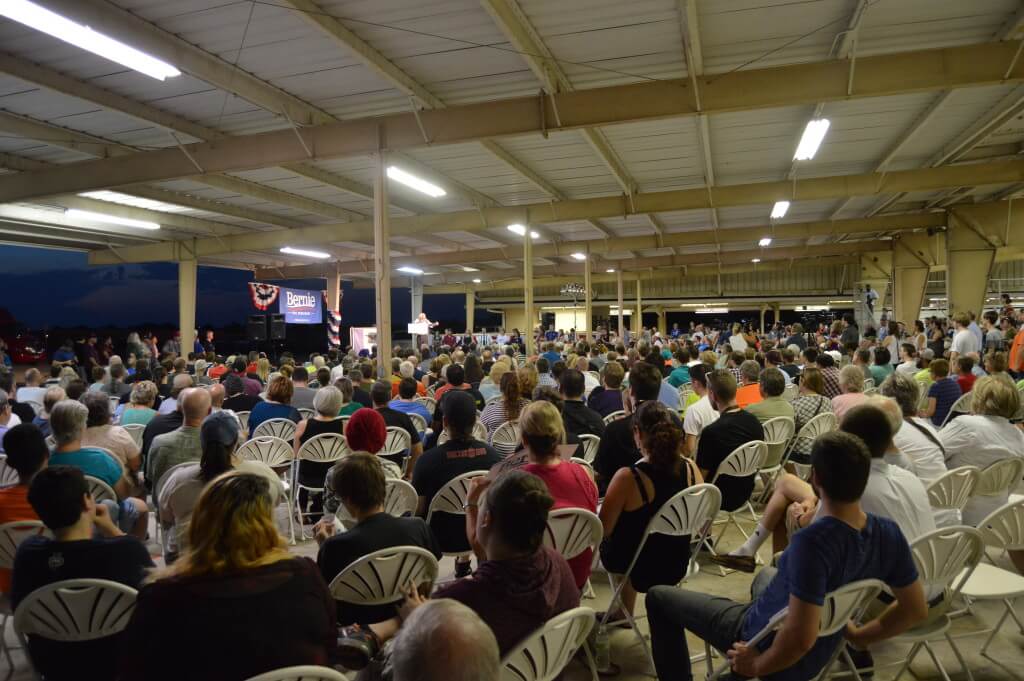 Despite sitting in the sticky, humid heat for nearly two hours, attendees only got more excited as the night wore on. Multiple standing ovations broke out in the last twenty minutes of his speech, and applause lines came about once per minute. Most already knew Sanders’ main talking points. “Oh, here it comes,” one union member said when Sanders brought up Citizens United, the topic that received some of the biggest cheers.

For those only at the Burlington event, Sanders’ never-wavering energy hid the fact that this was his last event of a full day on the Iowa trail. Several media interviews and hot, sweltering events at a sun-drenched park in Grinnell and a packed, stuffy office opening in Ottumwa preceded Sanders taking the stage on a flat bed trailer in the southeast river town.

Earlier in the day in Grinnell, the crowd was mostly young college students and liberal retirees. Burlington is a working class town, and the audience was packed with blue collar workers. Labor members leaned up against the fence of the animal show pen, donning the shirts of their local unions and baseball caps. “Break ’em up!” shouted one man when Sanders’ speech turned to criticizing banks “too big to fail.”

“His message, everything about it resonates with me,” said Aaron Carr 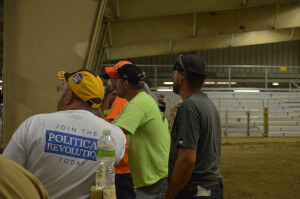 , a laborers union member from Pekin, Illionis who drove two hours with some of his friends to see Sanders. “The blue collar worker has been taking a beating for the last forty years. It’s time for it to stop. Bernie Sanders is the only candidate who has said any message about taking on the big banks and Wall Street. It’s long past due.”

“A lot of my coworkers are uninformed – we’re waiting on upper union leadership to make an endorsement,” Carr added. “My hope is they get on with Bernie Sanders.”

That sentiment was shared by a number of labor members from Iowa that Starting Line spoke with at the event. Several people noted that while some of their local leaders are leaning toward Hillary, much of the rank-and-file is agitating for a Sanders endorsement.

Another important part of the Sanders coalition – college students – were similarly enthused with his appearance near Grinnell College. A crowd also of around 500 came out to hear him deliver his stump speech from a park gazebo, many taking shelter under the shade of nearby trees while some brave (or foolish) students stuck it out in the sun to get a closer seat. 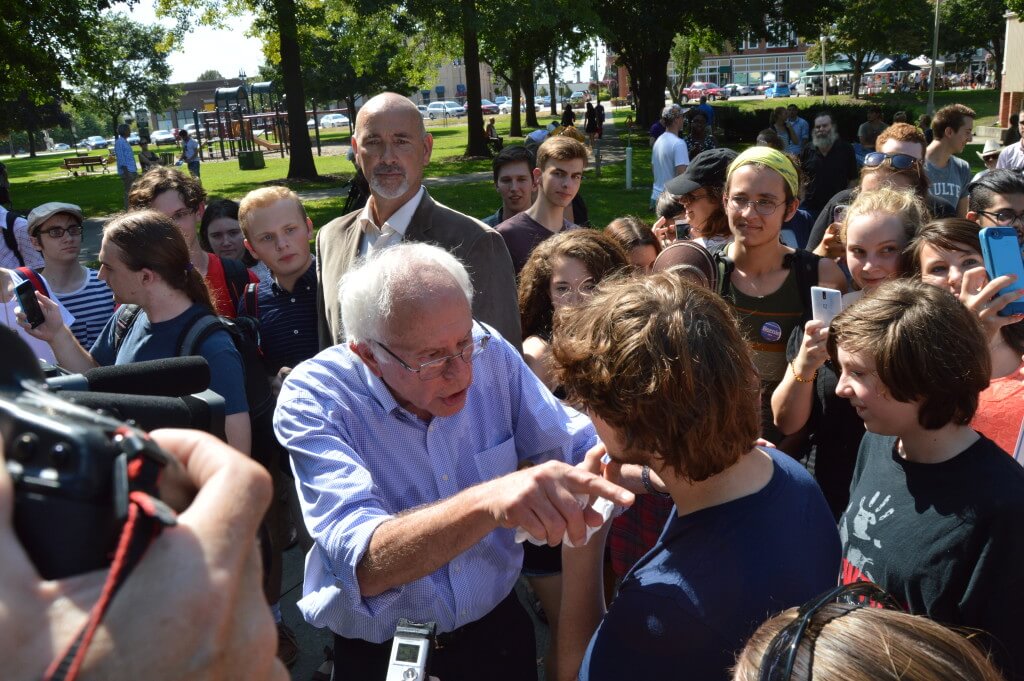 “What I see in Bernie is he’s not just doing it because he wants it, but because other people need him,” said Riley Murphy, a first-year student from San Diego who had just moved to campus two weeks ago, partially to get involved in the Iowa Caucus. He mentioned he prefers Biden, but is ready to jump on with Sanders. “They’re on top of these different social attitudes before they’re popular because they’re the right thing to do … I think what’s really appealing about him is that he’s honest and he knows how to get a crowd worked up. Young voters, millennials, we like to be excited. When you can find a person who has an attitude where it looks like when they get into office they’re not going to sit around.”

“He’s the first one in a long time to talk about wage inequality,” said Hannah Lee, a third-year student who helps head up the Sanders group on campus. “He’s listening to the Black Lives Matter movement … From what I hear, there’s a lot of Bernie supporters here [on campus].” 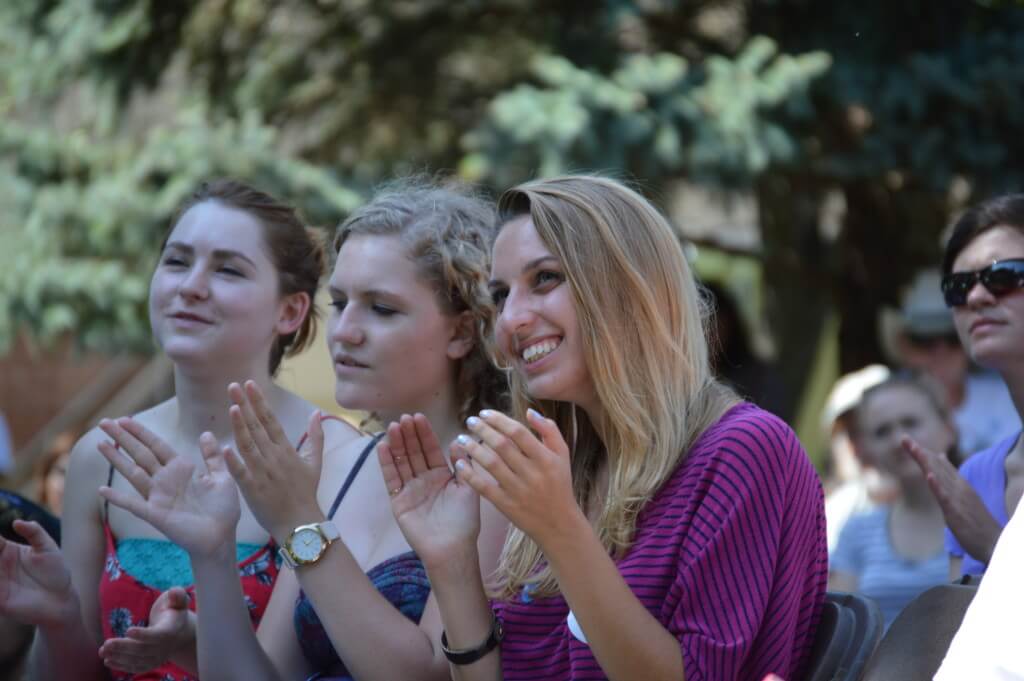 Overall, it was a day full of encouraging signs for Sanders. While he has been very successful in turning out massive crowds of supporters in places like Oregon, California and Arizona, he still obviously needs to place close to Clinton or outright win at least one of the early states. That will require much more than just big rallies in liberal-leaning cities. That needs a 99-county effort, with excited backers ready to turn out to every precinct. Record early crowds in mid-sized and small towns points to that being a viable path to victory.

“We have [had this large of events], but not this far out,” said State Senator Tom Courtney, who has endorsed Hillary Clinton, but wanted to come out to support all the Democrats. “What I’m hearing locally is what I’m hearing everywhere – people are ready for a real change and some think Bernie’s is that real change … I’m supporting Hillary because I believe she’s the best chance of getting a Democrat elected President. But Bernie says a lot of good things, every Democrat has got to love the stuff he says.” 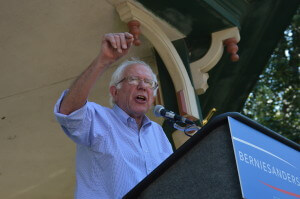 “This is a different kind of event in Des Moines County,” said county chair Sandy Dockendorf, noting many of those in attendance were undecided and here to hear from one of their candidates (the local party sponsored the event). “For us, I think it’s exciting. If I could get every candidate in front of every voter, I would do that … There’s a lot of support for the top three candidates [Clinton, Sanders and O’Malley] in the county. I could probably name a like number of people for each one. It’s sort of like 2008 where we went one-one-one. I don’t think Des Moines County listens to the polls.”

“People aren’t ready to commit too much,” added State Representative Jerry Kearns, who said he thinks many people are waiting to see what Joe Biden does.

Some caveats, however, should be pointed out. Many attendees in Burlington had traveled over from Illinois and Missouri to see Sanders speak. So they can’t caucus, but they could easily come volunteer in the effort. Grinnell is a small town, but a very liberal one with Grinnell College where you can get good turnouts. Martin O’Malley brought out 400 in town a week before. That event, however, was on campus during a weekend. Sanders’ was during the weekday in a park a few blocks from the university, in the middle of an extremely hot afternoon. Sanders also got 150 in Ottumwa for his local field office opening, a good number for a town not known for big activism.

Sanders continues his three-day swing through Iowa on Friday, hitting Muscatine, Tama, and Cedar Rapids. So far, it looks Bernie Sanders’ revolution is taking root in communities all across Iowa.

4 Comments on "Bernie Sanders’ Revolution Spreads Outside The Big Cities"