NBC’s Parks and Recreation’s seven-year run ends tonight with their series finale. Leslie Knope’s drive, decent humanity and love for her town built a loyal following of fans for the show. However, one thing always bothered me: the cost of her campaign for City Council in Season 4. Seriously, a bus tour? I’ve run several local legislative races around Iowa, and I was amazed at what she chose to spend on for her campaign in the fictional town of Pawnee.

So as the book closes on our favorite Indiana government employee, I decided to add up all the expenses from her city council race. A lot of these, of course, are estimates. They’re based off my own experience, conversations with Iowa political consultants and a pricing guide from Carter Printing in Des Moines. After binge-watching Season 4 and taking copious notes, this is what I came up with: 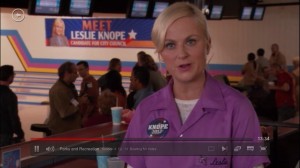 Leslie sure loved campaign banners. Most pros will suggest only buying one of these to use at your larger events. I counted over a dozen throughout the course of her run (sizes are rough eye estimates)

Tom must have been in charge of swag purchases. The Knope campaign went with the fancy corrugated yard signs, which always drives up costs. I’m guessing on a lot of amounts here from what was visible in the episode or the amount you’d likely buy.

Jerry and Donna stuffed a whole lot of envelopes in episode 4.18. Surprisingly, it doesn’t appear Leslie conducted a full direct mail campaign, usually one of the most costly (and also most effective) aspects of a campaign. Based on the number of boxes Jerry had around him, I’m calculating these numbers off of a 2,500-piece volunteer mailing.

Few city-level races of this size do polling. They cost a lot more than what you’d think, anywhere between ten and fifteen thousand. Ben ordered at least two polls (it might have been more, but it’s possible the polls they were discussing in later episodes were public ones). 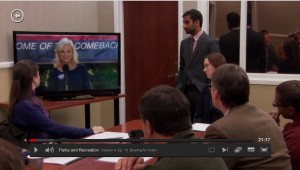 Leslie got a full briefing book on Bobby Newport. That probably cost a lot considering the research required to detail all of the Sweetums candy empire’s business dealings. She also held two focus groups in just one episode. Those things are VERY expensive.

Considering the huge expenses Leslie’s campaign incurred on less-important budget items, you’d think she’d save some for TV ads. Instead, she only bought time for one ad during a major basketball tournament, which she didn’t even run because of a dispute with Ben. It’s very difficult to estimate the point costs in the Pawnee media market, so we’ll be kind here to Leslie and low-ball the cost of an ad during a high-ratings sporting event. 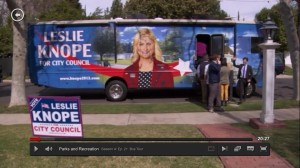 Do I really need to explain why you shouldn’t rent a full bus tour for a city council race in a town of about 50,000? This is the estimate for a full wrap, rental and driver cost for a week. At least she probably didn’t spend much on gas just driving around Pawnee.

Another section where Leslie could have saved some funds. Again, some rough estimates.

This part of the budget will kill you if you’re not careful. 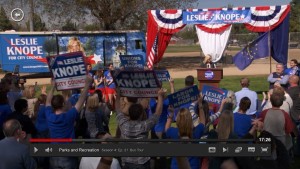 As you can see, the Knope campaign’s budget was completely upside-down. Huge up-front expenses on polling and research left them with nothing for direct voter contact. A classic rookie candidate mistake.

Still, they did save money in key areas. The campaign was run out of Andy and April’s house, so no office rental costs. Ron gave some in-kind donations by building Leslie’s second podium himself and providing food for the debate-watch party. Newport paid his campaign manager $250,000 for six weeks work, while Ben worked for free. However, how valuable that was is an open question. Ben got lots of praise for running Leslie’s campaign, but I would have fired someone who presented me with this budget. Hopefully Jerry was in charge of the finance report so Ben’s mistakes were never discovered. Then again, Leslie won, so what do I know?

Farewell Parks and Rec crew. You showed us a government that actually worked and was led by public servants who cared. We’ll miss you.

2 Comments on "How Much Did Leslie Knope’s City Council Campaign Cost?"