Iowa Starting Line closes out its best year yet as 2022 comes to an end, one in which we saw rapid growth and significant success with our social-first reporting efforts.

Our focus in getting Iowa news journalism in front of Iowans where they’re already at online—and through whichever format works, whether that be infographics, videos, quote cards, maps, in-depth stories, memes—is going very well.

In this piece, we’re largely going to focus on the most-used social media platform.

Starting Line was the fastest-growing news outlet in the state on Facebook, and it wasn’t even close. Our following there grew by 161% since January 2022. The next closest was 39%, and then 21% after that (see the final column on the right in the below screenshot).

You might notice a lot of independent or small news outlets in that Top 15 of pages for growth. Many of those publications run their own social media feeds (note that none of Lee Enterprise’s Iowa newspapers show up here, which all automate their social media posts). There’s some important lessons here from news outlets that outperformed in 2022—for example, The Gowrie News posted tons of local sports photos, which drew in more followers for their other reporting.

Using Crowdtangle data, we’ve been tracking our progress on Facebook both internally and compared to other news outlets.

Why? Well, for starters, journalism does little good if no one is reading it. We’re always keeping watch on whether our content is actually being engaged with and read so we can tweak and improve our delivery methods.

But moreso the Crowdtangle data has helped in measuring whether what we’re doing is enough or making the impact we hope it does. There are many ways we’re able to demonstrate success, but stacking our Facebook engagements against others is a big one.

Starting Line finished in 13th place of all Iowa news outlets for engagements on Facebook, a really big accomplishment for us. We drew more engagement than well-established outlets like the Cedar Rapids Gazette, the Quad-City Times, the Sioux City Journal, the Iowa City Press-Citizen, Des Moines’ ABC-5, Mason City’s KMIT or the Quad Cities’ WHBF (Local 4).

We feel that if we are reaching as many Iowans on Facebook as some of the largest newspapers and mid-size TV stations, that’s a very sizable and impactful number of people, which is why we set a goal this year of getting into the Top 15 every month.

There is one big caveat, however, with Crowdtangle data. These are external numbers only we’re comparing here, not internal. The difference, we believe, is the Crowdtangle data only counts engagements from the actual post itself on a news outlet’s Facebook page—but not the engagements off of the shares of it or amid the comments section.

For example, our internal Facebook engagements number for Starting Line (calculated on Sprout) is 2.1 million, nearly ten times our public, external number of 253,000 that Crowdtangle counted.

Given how our shares usually go, we wouldn’t be surprised if we actually outpace even more Iowa news outlets, but this is just the public data we have to compare, and we’re pretty happy with it.

The reason why we’re mentioning all this is to point out that our Starting Line content was actually engaged with over two million times on Facebook alone this year. That’s really significant, because that means that there were over two million instances this year where someone saw reporting from Starting Line on Facebook, stopped scrolling on their phone, read it or watched it and proactively reacted in some manner.

We also surprisingly got into 9th place of all video views on Iowa Facebook, thanks again to our new focus on delivering the news in multiple formats—again, because people consume their news differently.

KCCI, meanwhile, continues to swamp everyone on Facebook—they have over a half million followers on Facebook at 566,000 (second-place WHO-13 has half that at 262,000) and had 3.6 million engagements (second-place KCRG had 2.7 million). They also racked up 27.7 million video views—the next closest, the Des Moines Register, had just 5.6 million. A couple viral videos helped boost all these.

We don’t have as easy tools to compare ourselves on other social media platforms (or maybe we just haven’t figured out that tab in Sprout yet). But we do appear to be the only Iowa news outlet with a sizable TikTok following at over 12,800 (Iowa Public Radio is starting to do some fun things on there, but they’re only to about 290 followers so far). We had 4.9 million views on TikTok this year, along with 434,000 engagements. We deemphasized our Twitter usage this year, but still racked up over 3 million video views there.

One other graph that will be of interest to Iowa liberal activists, which is likely the majority of people who will read this—the Facebook engagement comparison between us and Bleeding Heartland and Iowa Capital Dispatch. I’ve shown this to some activists and staffers this year who were rather surprised by it. 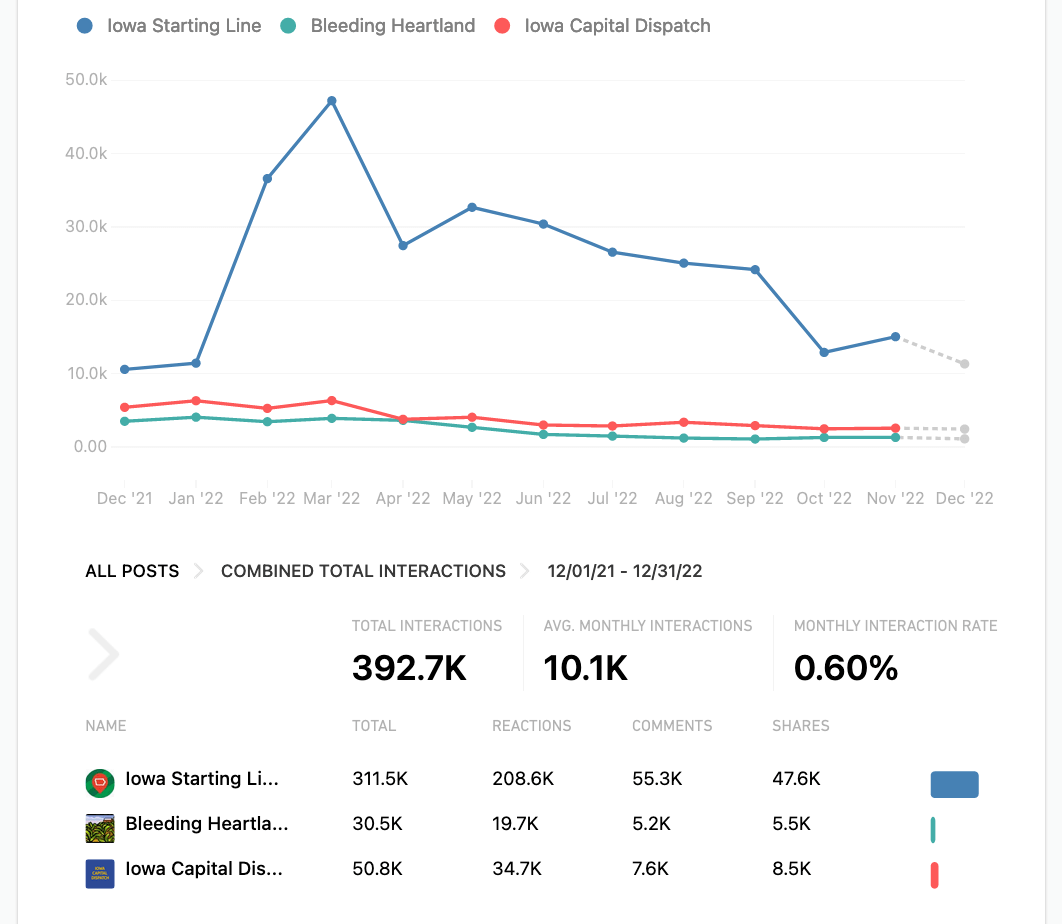 As you can see, we far outpace the other two outlets that Iowa liberals like to frequent. And again, Crowdtangle only shows external numbers. The actual total number of engagements from Iowans is far higher off of shares, and look how many shares we have up there.

My point in sharing this, to be clear, is part of a bigger point I plan to make in 2023 to Iowa liberal activists, which is this: You live in a highly-informed, liberal information bubble. Some of you understand that, but I think a lot do not. What you are reading about Iowa news and politics is not what the vast, vast majority of Iowans are reading. This often leads to frustrations and misunderstandings, like how Iowans could possibly vote for so-and-so when they should know this-or-that.

There are ways to combat the silo-ing of Iowa news, which is what we’ve been working on the past two years. Starting Line actively tries to break news out of the highly-engaged liberal bubble and into the mainstream audience, both in how we write and format our stories and how we deliver news through graphics and videos on multiple platforms.

And, most importantly, you can help with this. We will have more easily shareable content like right-wing debunkers that can be shared into your local communities before online conspiracy theories catch hold. You can sign up for our newsletter for updates later in the year for that.

We’ve already greatly appreciated all of your support this past year in helping getting these important news stories out to the masses. Our team has learned a lot from it, and we’ll be sharing more of those lessons in the months to come.

If you enjoy stories like these, make sure to sign up for Iowa Starting Line’s main newsletter and/or our working class-focused Worker’s Almanac newsletter.

Iowa Starting Line is part of an independent news network and focuses on how state and national decisions impact Iowans’ daily lives. We rely on your financial support to keep our stories free for all to read. Find ISL on TikTok, Instagram, Facebook and Twitter.

2 Comments on "Starting Line Was Iowa’s Fastest-Growing News Outlet In 2022 On Facebook, TikTok"