People who deny that Joe Biden is the President of the United States aren’t just a fringe group in Arizona or Florida anymore. They’re right here in Iowa—and they want to be in the Iowa Legislature.

You might remember the traveling Ohio math professor peddling the Big Lie in Independence, trying to drum up more support for their mistaken belief that a majority of Americans voted for Donald Trump for president in 2020.

At least four Republican state legislative candidates were on hand during that presentation—Brad Sherman, Bernie Hayes, Anne Fairchild and current Rep. Sandy Salmon. Both Sherman and Fairchild appeared to be helping organize the event.

And there will be even more actual candidates on your ballot for the Iowa Legislature who agree with the Big Lie and want to impose even more voting restrictions—if not eventually take away the right entirely for many.

Here’s who they are, and what they’ve said to earn a spot on this list:

Sherman—the chair of the Iowa County Republicans and a pastor who founded Informed Choices, a chain of clinics that dissuade women from seeking abortions—was the winner of a six-way Republican primary for the open seat created by redistricting.

He says on his website his policy positions include being “Pro Election Integrity.” But that apparently means something different to him than the rest of us.

“I will say it straight out: The outcome of the November 3, 2020 general election was the result of massive fraud and cheating,” Sherman says on his campaign website. More ominously, he adds, “These things need to be addressed in Iowa.”

His opponent is Elle Wyant, a Democrat from Marengo who works in air cargo sales at UPS and is a board member at LGBTQ advocacy group One Iowa. She is also a transgender woman who documented her transition in the early 2000s on YouTube.

But Stoltenberg, an author and speaker who campaigned on her anti-abortion views and on ending civil rights protections for LGBTQ Iowans, did more than just talk the talk: She traveled to Washington, DC (she says with a “prayer group”) to attend Trump’s “Stop the Steal” rally, posting photos and descriptions of the event on her Facebook page.

“WE THE PEOPLE are simpl[y] exercising our constitutional right to assemble and tell the government officials they are not representing us and there is fraud,” she wrote on Jan. 6, 2021.

When the Quad-City Times picked up the story, Stoltenberg claimed she never went into the US Capitol. She said she was only “there to pray for my nation because I love my nation, and pray that there would be peace and there would be truth.”

Matt Trimble, chair of the Scott County Democrats, said in a press release that Stoltenberg’s “claim that the 2020 election was fraudulent is contributing to a dangerous moment in our country’s history.”

“We must identify her and all who support this un-American activity as dangerous to democracy,” he added.

Stoltenberg’s opponent is Craig Cooper, a Democrat and former hospital spokesperson and reporter. He called Stoltenberg’s attendance at Jan. 6 “irresponsible.”

Has POTUS met my extreme right Republican opponent? She is trying.

Abdouch: ‘Joe Biden is not the president’

But why tiptoe and dog whistle when you can just say what you really mean?

So goes the thinking of Sarah Abdouch, the Republican candidate for Iowa House District 20, which includes northwest Council Bluffs and Carter Lake.

Aldouch seems to pride herself on how far to the right she is—even to the point of attacking fellow elected Republicans for being too moderate.

Abdouch is a former state lobbyist and state director for Convention of States Action, a political action committee trying to persuade at least 34 state legislatures to officially call for a constitutional convention that would put all federally enshrined rights in jeopardy.

You’ve probably guessed that’s directly tied to the Big Lie, and you’d be right. While Aldouch might dance around it on her official candidate page, she doesn’t hold back on her personal profile.

It’s clearly no small matter for her: As recently as this week, she posted a single sentence, “Oh, also the 2020 election was stolen.”

Her Democratic opponent, Josh Turek, is a former two-time gold-medal Paralympic basketball athlete. In an interview with Starting Line, Turek laid out the stark choice between a vote for him and Abdouch.

What Gehlbach Likes: ‘There was all kiiiiiiiinds of cheating’

Not every election denier can afford to be so open.

Take Dan Gehlbach, the Republican running to represent Iowa House District 46, which encompasses parts of Urbandale and the northeastern part of Dallas County.

Gehlbach is a Waukee school board member who is nonetheless campaigning on his support of “school choice” and claiming that public schools are “brainwashing” students in LGBTQ ideology.

Gehlbach’s social media presence, however, is filled with much more moderate language, plus the standard fundraising appeals and campaign photos.

But Twitter’s got a fun feature called the “likes” tab. Basically, any tweet a person likes is public knowledge by clicking a tab on their profile.

So what has Gehlbach liked that puts him into the election denier category? A sample of his likes from November through December 2020: 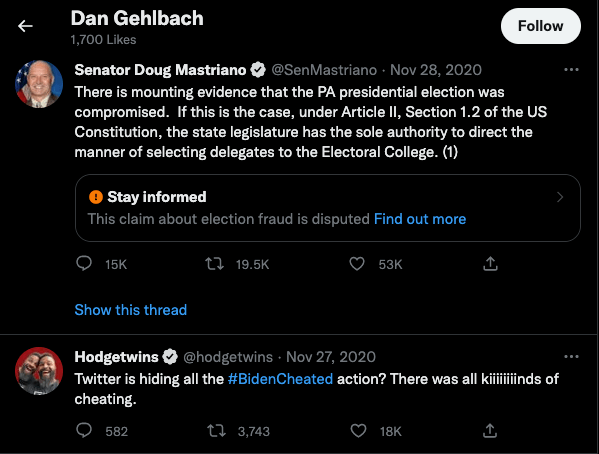 After fundraising reports came out, Montgomery called him “a puppet being forced on us by the extreme right wing that wants to defund our public schools and eliminate reproductive freedom.”

Fairchild: Doesn’t believe US “has had a free or fair election for decades”

Republican Anne Fairchild is running for Iowa House District 78, which includes much of southeast Cedar Rapids.

And she’s taken up some of the very same solutions as Big Lie proponent Douglas Frank, which include further restricting Iowans’ right to vote, and making already overworked election officials count every single ballot by hand.

“The only way to ensure the sanctity of our elections is to vote using serialized paper ballots that are cast on Election Day and counted by hand at the precincts,” Fairchild says on her website. “Electronic voting machines and tabulators have no place in our elections. Same day registration should be eliminated and absentee ballots only allowed with legitimate justification.”

She was also, along with Sandy Salmon and Brad Sherman, at Douglas Frank’s “Election Integrity Summit,” and proudly posts that fact on her “News” page, noting she was swayed by his arguments.

“His findings showed how the voter rolls are no longer behaving randomly county by county,” she said. (His findings offered no proof of that.)

Now a true believer in the Big Lie, she told the Cedar Rapids Gazette she believed vote tabulators in the state are connected to the internet, making them vulnerable to hacking, which Iowa’s Secretary of State (a Republican) has said is untrue.

But Fairchild even went beyond Frank’s assertions in her Gazette interview.

“Fairchild insisted that the voting process in the U.S. is flawed, and that she does not believe the country ‘has had a free or fair election for decades, to be really honest,'” the paper quoted her as saying.

Her opponent is Sami Scheetz, an adviser to the Mike Franken for Senate campaign who would become Iowa’s first Arab-American state lawmaker if elected.

As much as we perhaps want Bernie Hayes’ dream of building the world’s first holodeck in Cedar Rapids to come true, it’s his embrace of the Big Lie, boldly going where no serious candidate should go, that should probably be the most concerning to Iowa voters.

Hayes, of Cedar Rapids, is running again for Iowa Senate. This time in the redistricted Senate District 39, which covers Cedar Rapids as well as southern Linn County.

He was one of four candidates at Frank’s Independence presentation, standing and introducing himself to the crowd. On his website, he responds to an NPR article in an open letter that he says is just-asking-questions and heavily relying on “proof” of fraud from Frank’s websites.

“Many news organizations, NPR included, will repeatedly (relentlessly) state that there is ‘no evidence’ for the Nov. 2020 presidential election fraud. My concern is that I hear the statement, but I’m never given the evidence to back it up,” Hayes said.

“There’s a very stark difference in views and vision between me and my opponent,” Bennett said this month. “Your vote counts.”

But we’d be remiss to not mention Iowa Rep. Sandy Salmon, the only one of these candidates who has actually been in the Iowa Legislature for four terms trying (and sometimes succeeding) to turn these half-baked ideas into burned reality.

But she wants to go much further in election law restrictions, touting the same kinds of Douglas Frank-inspired solutions like only paper balloting, falsely claiming voting machines were connected to the internet, denying people the right to vote absentee, and more.

“We need common sense protections for our election and voting process so that fair and clean elections take place,” Salmon says on her website.

Sound familiar? Salmon was not only recognized multiple times at Frank’s Buchanan County event this summer but she was also heralded as election deniers’ one true champion in the Iowa Legislature.

And that wasn’t her first election-denier event: She also attended Mike Lindell’s three-day Cyber Symposium in Sioux Falls, South Dakota, in August 2021, later saying Lindell “gathered enough evidence that points to manipulation, interference, and potential fraud large enough to impact the outcome of the 2020 election in the presidential race and likely other congressional races as well.”

“I am determined to fight for our rights and freedoms,” she wrote on her Facebook page July 4. “To do this we need the votes of many, especially those who feel under-represented!”