For well over a year, Ankeny’s Kimberly Reicks and Emily Peterson were—and still are—the face of Iowa’s far-right movement against masks in schools and later opposition to the general acceptance of LGBTQ students. The former “Mama Bears” duo accused the school district overall of abusing children and educators of preying on students, without evidence.

They had the ear of the Governor, who often repeated the women’s stories in interviews and speeches, believing their claims were true and thinking it gave her special insight into what was really going on in Iowa schools.

Even as recently as last week, Republican lawmakers were reaching out to Reicks to congratulate her on her latest stunt at the Ankeny school board, where she stripped down to a leotard to make a point about drag shows. One legislator even suggested passing legislation next session to terminate teachers based off of Reicks’ stories.

[UPDATE: Rep. Jeff Shipley sent over the following comment: “Weaponizing DHS with false statements is an incredibly serious allegation. I support the criminal prosecution of anyone who would commit such a heinous offense. I believe the State of Iowa can learn a great deal from this event and my heart aches for any other family suffering from such malevolence.”]

Now Reicks stands charged with making one of the worst kind of lies you can—that her former best friend’s son sexually abused her daughter and her friend’s husband would watch their daughter undress. Reicks also claimed Peterson was having an affair with her husband.

DHS found the first two accusations to be false (and there doesn’t appear to be any proof presented about an affair in these documents).

These criminal complaints reveal what was so painfully obvious to anyone not trapped inside a far-right echo chamber: that these are deeply unserious, untrustworthy and even dangerous people. Despite the enormous number of red flags surrounding their claims, rhetoric, background and behavior, top Iowa Republicans wholeheartedly promoted the “Mama Bears” and their attacks on schools, teachers and LGBTQ Iowans.

Those Iowa Republicans—and everyone else—should take a few minutes and read through what’s written in these complaints. If Reicks was willing to lie about something as awful as this about her former friend’s children—her children!—then why on earth would you trust what she says about anything else?

Posted below are the description sections of four of the six criminal complaints, which included two counts of filing a false report and four counts of harassment. A few of the complaints read essentially the same, so we’re just posting the four unique ones (and omitting the pages that has the women’s addresses and other identification). 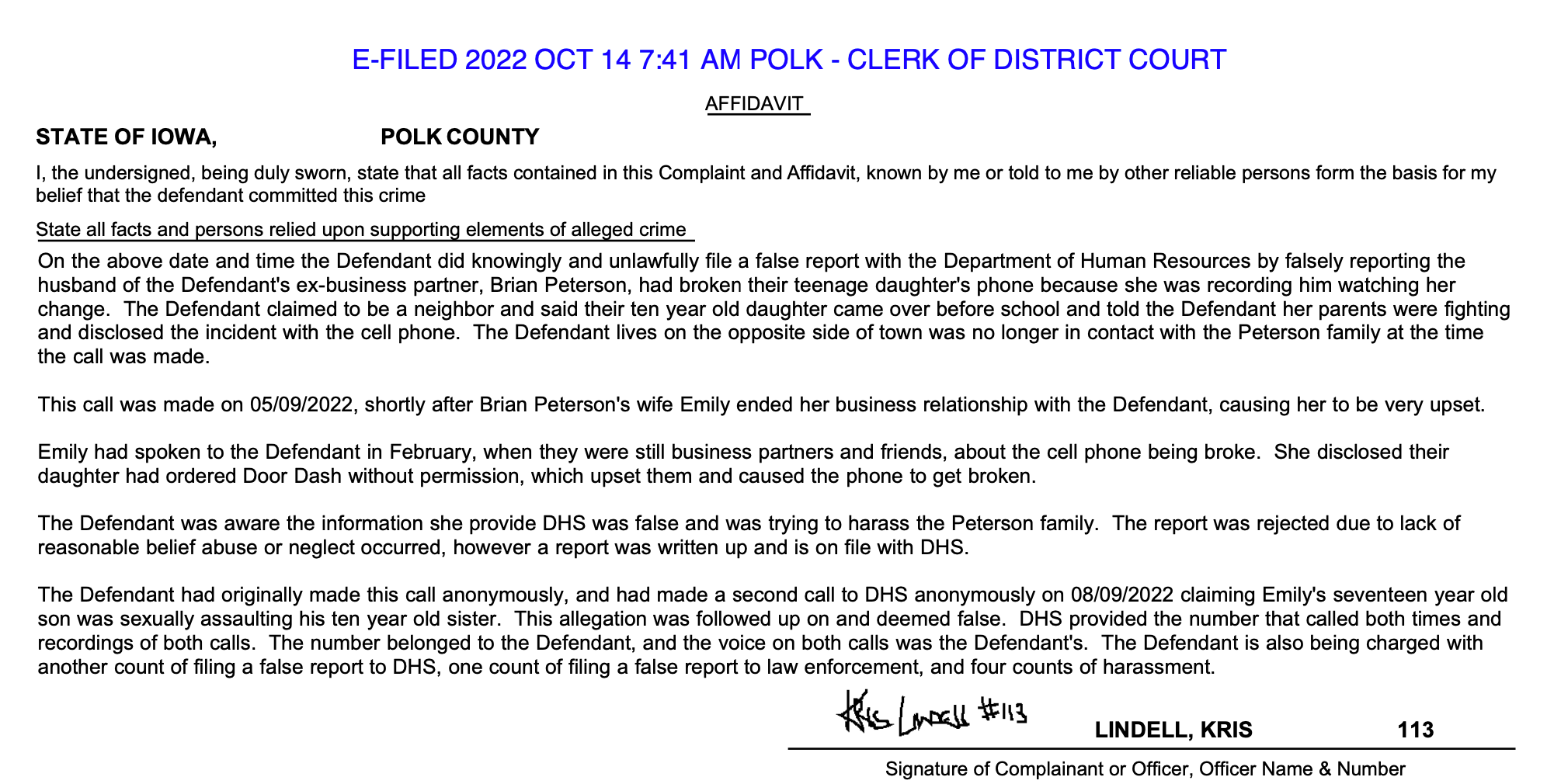 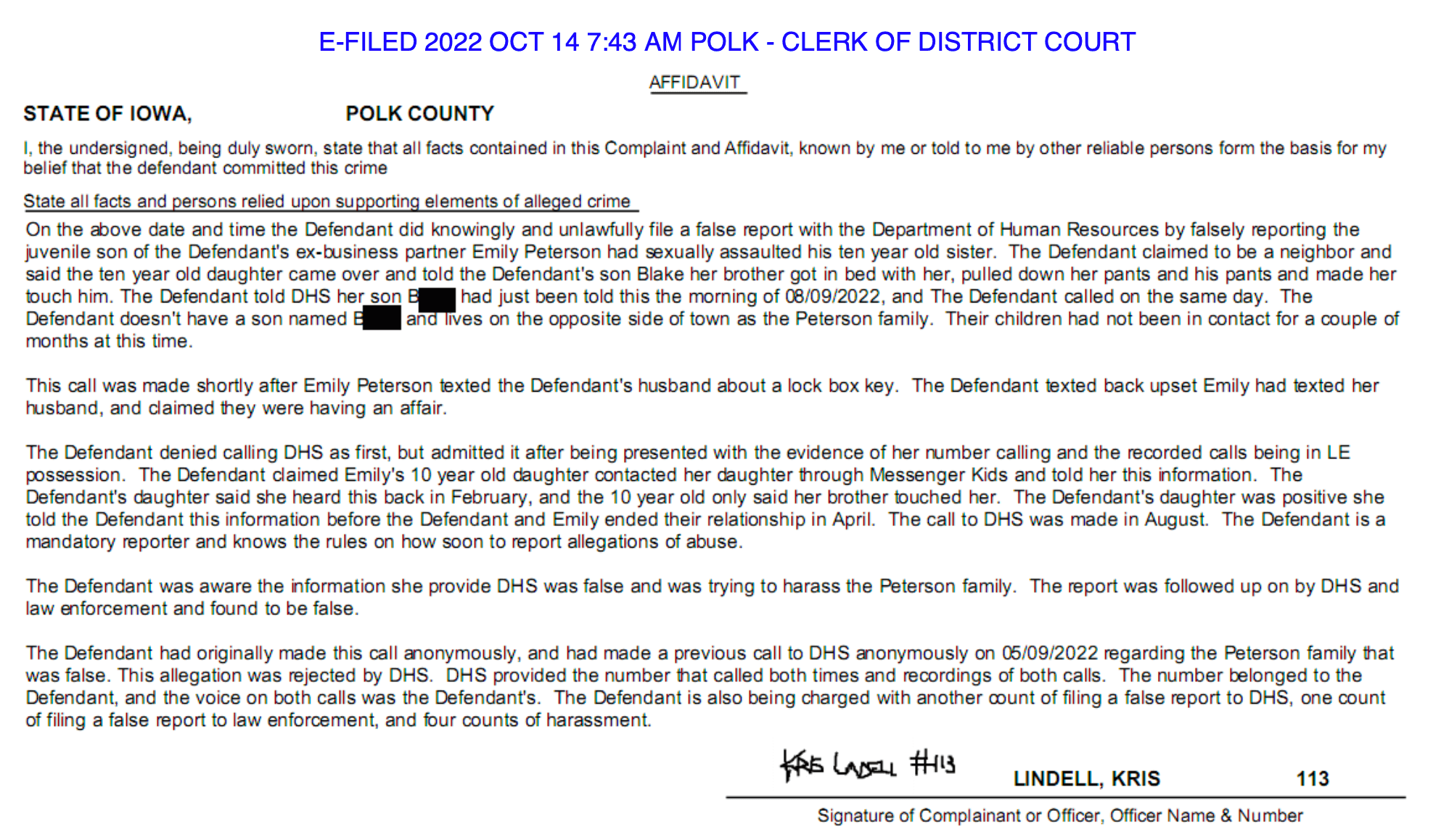 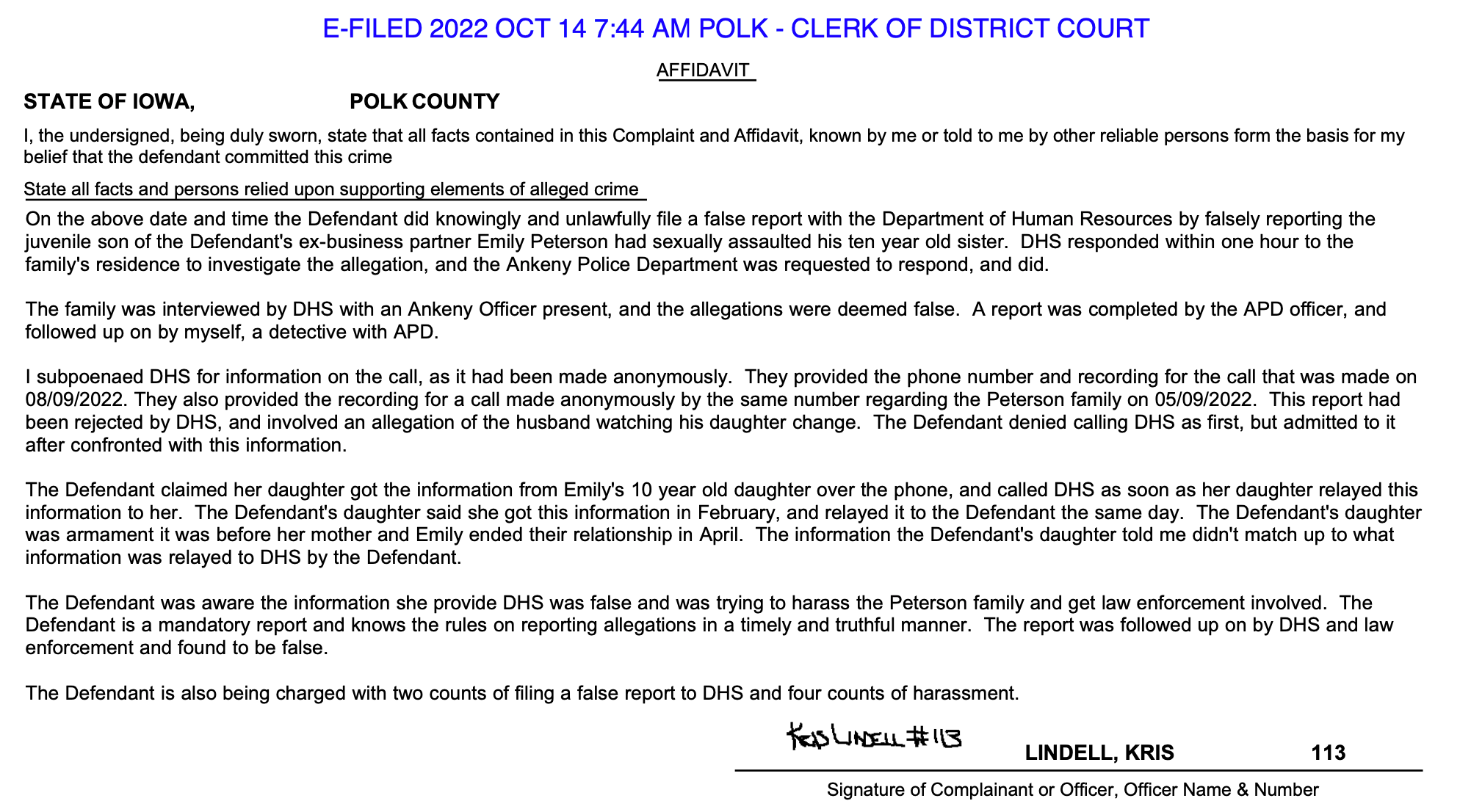