What’s happening with airports across the country as airlines deal with staffing shortages, capacity constraints, and delayed and canceled flights is nothing new to Iowa’s smaller-commercial airports. In a three-part series, Twitter user @AirspaceIowa will explain what’s been hindering Iowa’s smaller airports and what it means for their future.

Airline service to small markets peaked around the late 1980s and has been declining ever since.

For instance, according to archives from the Official Airline Guide, in 1989 Sioux City had non-stop or one-stop/same-plane service (also known as a “direct” flight) from America West Airlines to Phoenix, Northwest Airlines to Minneapolis, TWA to St. Louis, and United Airlines to Denver.

And while the Sioux City example was something of an outlier, at the time much smaller Iowa markets such as Burlington, Fort Dodge, and Spencer had airline service to one and sometimes two or three destinations. Today, Sioux City is barely hanging on to two government-subsidized daily flights.

The small-market service peak occurred about a decade after President Jimmy Carter signed into law the Airline Deregulation Act (ADA) of 1978. It was a bold attempt to deregulate a significant slice of interstate commerce, and its advocates promised increased and expanded service thanks to higher competition.

Before the ADA, airline service in the United States was regulated by the Civil Aeronautics Board (CAB), which gave explicit permission for specific airlines to serve specific city pairs. To sell a scheduled passenger flight between, say, Sioux City and St. Louis, an airline would file with the CAB for permission to serve the route. If the CAB approved, that airline would be obligated to provide a specific frequency and schedule. No other airline could provide the same service unless the CAB decided the market was underserved and allowed new entrants. The CAB also set fares and would ensure airline profitability if a route was losing money.

In the short term, increased competition spurred by deregulation was a boon for airline service everywhere. After the ADA became law, airline demand for new routes opened up fiercely. The next decade was a bloodbath for airlines as new entrants such as People Express boomed and busted, and legacy airlines Braniff, Eastern, and Pan Am all folded (with many more legacy airlines to follow over the next two decades). 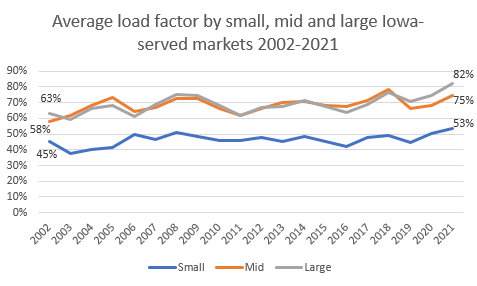 On the flip side, Des Moines and Cedar Rapids airports have seen significant service increases, driven both by population and business demand but also from increased competition thanks to ultra-low-cost carriers (ULCC) such as Allegiant and Frontier.

ULCC airlines typically provide multiple nonstop flights per week (but not daily) in mid-size markets to high-density leisure destinations, as opposed to major airlines and their regional partners which connect markets of all sizes to each other through daily flights via the hub and spoke model.

Part three will focus on the practical impacts to Iowans as small-commercial airports decline and what it means for the future.

1 Comment on "The Rise And Fall Of Iowa’s Small-Market Airline Service: Part Two"