What’s happening with airports across the country as airlines deal with staffing shortages, capacity constraints, and delayed and canceled flights is nothing new to Iowa’s smaller-commercial airports. In a three-part series, Twitter user @AirspaceIowa will explain what’s been hindering Iowa’s smaller airports and what it means for their future.

Part One: The pilot shortage impact

In the span of a few months, five small Iowa commercial airport markets were notified by three airlines that they will no longer have passenger service in the near future due to the nationwide shortage of airline pilots.

On June 22, American Airlines gave notice to the Dubuque Regional Airport that on Sept. 7, its subsidiary Envoy Airlines would be halting twice-daily service to Chicago. Dubuque joins Fort Dodge, Mason City, and Sioux City, which heard similar news from United Airlines’ regional partner SkyWest back in March. Burlington was also given the bad news by independent carrier Cape Air in May.

At the moment, all four previously-notified airports still have airline service because of the federal government-subsidized Essential Air Service (EAS) contracts those airlines agreed to—they can’t leave until a new carrier is able to serve the market. So while these airports may continue to have some level of scheduled service, it’s likely to be a significant step down from the twice-daily 50-seat jets Dubuque, Fort Dodge, Mason City, and Sioux City had recently.

More likely is that a small EAS-only airline such as Southern Airways Express, which operates as a charter carrier with fewer limits on pilot experience and much smaller aircraft, might step in and provide once or twice-daily scheduled flights with eight-seat Cessna Caravans—single-engine turboprops. 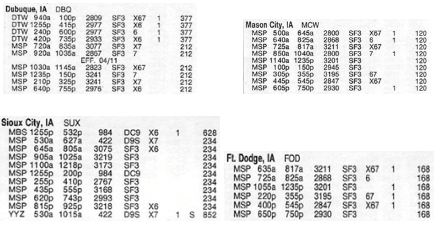 In terms of the pilot shortage, regional airlines such as SkyWest and Envoy have been hit harder than mainline carriers due to regional airlines’ space in the pilot talent pipeline—typically as the first airline job for new first officers (co-pilots). Since major airlines such as American, Delta, Southwest, and United pay higher than regionals, pilots with a year or two of regional experience under their belt are now quickly able to jump to a major airline. And the constraints on scheduled airlines hiring new airline pilots is fairly high; new first officers can’t be hired unless they have 1,500 hours or more of total flight time–also known as the 1,500-hour rule.

As you might imagine, it takes a long time to train a pilot and build that time. For the past two decades, most new airline pilots come from a civilian background as opposed to the military. In the civilian training pipeline, it takes a year or two minimum of training to become a commercial pilot or flight instructor. Then it takes another year or two of flight instructing new pilots or on-demand charter flying to build enough hours to earn an Airline Transport Pilot rating at 1,500 hours.

The military still provides its fair share of airline pilots, but their contribution is measured in the hundreds per year. As the Baby Boomer cohort of airline pilots continue to retire by the thousands annually, ranks of new 1,500-2,000-hour first officers have been filling the demand…just not fast enough to keep up with growth. The pilot shortage is certainly impacting service at larger airports too, but with many more flights to choose from it doesn’t have the same consequences.

Regional airlines are getting creative in trying to find solutions. For instance, Skywest’s recent announcement to start a “charter” subsidiary would exempt their EAS flights from the 1,500-hour rule by flying their Canadair Regional Jets with only 31 seats. It remains to be seen whether this solution is viable, but even if it is, it still takes a few months to hire more pilots, safely train them in simulators, and get them through a satisfactory 25-hour initial operating experience before they’re qualified.

The pilot shortage is just the most recent impact in a long line of regulatory and demographic changes that have reduced airline service for small markets, mirroring other trends that have left rural communities with fewer services and opportunities than larger markets.

Part two will dive into the past few decades worth of Iowa airline history.