Iowans fed up over inaction on gun reform in the wake of multiple new mass shootings, including the Uvalde, Texas elementary school massacre, let Sen. Chuck Grassley have it at his town hall meeting in Columbus Junction yesterday.

About 20 people were in the audience at his Louisa County forum—smaller crowds typically result in more subdued discussion at Grassley events, but that was not the case here. Multiple attendees pushed back, interrupted and called out Grassley’s role in blocking gun safety legislation from coming to the Senate floor.

“You have been filibustering gun reform,” one woman said near the start of the forum. “My daughter’s a teacher, my daughter-in-law is a teacher, you are risking their lives.”

Grassley began his response by lamenting the loss of life in Texas.

“It’s a sad commentary when we have somebody who can kill all the kids that were killed, you’d think the safest place to go, to send your kids to school is the safest place,” he said.

Several audience members pressed Grassley multiple times over what new gun safety measures he’d be open to supporting, but Grassley repeatedly avoided committing to supporting or opposing any particular idea. He insisted he wanted to wait to see what the legislative negotiations between Republican Sen. John Cornyn of Texas and Democratic Sen. Chris Murphy of Connecticut produced. Grassley believed that withholding public judgement on any potential fix would help the negotiations advance.

“Yesterday, they had a meeting by Zoom and they had very positive results, and they think they have a framework put together that something can be done to stop this violence through some gun legislation and through some school safety issues,” Grassley explained. “To answer your question, I’m going to wait until they report next week before I decide what I’m going to do.” 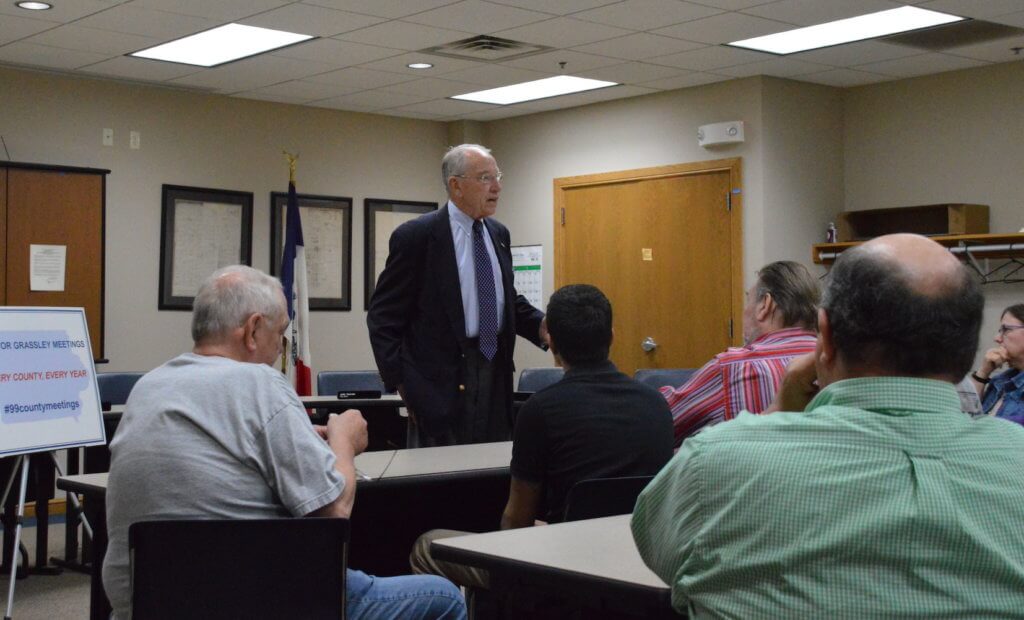 He defended his past vote to provide legal immunity to gun manufactures, saying, “I voted for it because I believe an honest business ought not to be sued for something that somebody else does.” Attendees pointed out that almost no other companies are given similar protections.

One man suggested banning the sale of AR-15 rifles, which he described as “they’re there to kill people.” Grassley noted that there’s over 15 million AR-15s already out in the country (the number may be closer to 20 million).

“You’re still going to have AR-15s even if you stop selling them right now,” Grassley said.

“The answer is not to do nothing!” one woman in the back of the room yelled in response.

Here too, Grassley avoided giving his current stance on the issue, again deferring to ongoing legislative negotiations, but he added an assault rifle ban likely won’t be on the table.

“The answer to your question is a process answer,” he said. “Whatever we do through the Cornyn/Murphy cooperative effort to make schools safe and do what you can with guns, that probably would not get 60 votes.”

When asked by another attendee about whether the CDC could at least fund a study on gun violence, Grassley pivoted his answer to the appropriations process, eventually saying that he could mention it to senators on the Senate Appropriations Committee. During his answer, Grassley went on a tangent of how appropriations omnibus bills often now come with a threat of shutting down the government, which Grassley said was a “stupid thing to do,” though he stopped to note that he has voted to shut it down in the past.

Grassley was asked by a woman in a Moms Demand Action shirt if he supported raising the age limit for purchasing an AR-15 (the Uvalde shooter purchased two AR-style rifles right around his 18th birthday).

“By the way, you’re talking to somebody that doesn’t know much about guns because I haven’t shot a gun in probably 20, 40 or 50 years,” Grassley continued. “I’ve got one little gun that hasn’t been shot during that period of times. So you aren’t talking to someone who loves guns, I don’t hate guns, but I do protect people’s constitutional rights.”

He also noted that several states already have some restrictions on purchasing AR-15s.

“Should we do it at the federal level or the state level? I guess I go back to my comments I’ve been making ever since Cornyn and Murphy was put on this, I’m going to wait and see what they come up with,” Grassley reiterated after the meeting to Starting Line. “I don’t even know whether it’ll be in their package, and if it’s not in their package, it’s not going to go anywhere anyway … I think it’d be wrong for me to say I’m not open to everything that might be on the table, but then you pick and choose what you can get 60 votes for.”

Near the end of the forum, Max Hilton, 64, a general contractor who lives in North Liberty, pressed Grassley on the overall lack of action Iowans are seeing in DC and the growing danger from a stalemate.

Hilton added that he felt some people were buying up AR-15s because they’re preparing—and hoping—for a civil war.

“You guys need to get it together,” Hilton said. “Because if you don’t get it together, there’s some people out amongst us that are going to become more violent. And we are this close to that happening. One more election like we just had, and these shenanigans that gone on for two years with people, ‘well I’m not sure it’s a fair election or not’ … that stuff’s gotta stop.”

Grassley replied by emphasizing the need for bipartisanship, but that it was difficult to get things passed with a 60-vote threshold—multiple attendees pushed back on his use of the filibuster throughout the meeting.

“Now you’ve hamstrung yourself with the rules,” Hilton observed.