Iowa Rep. Ashley Hinson is trending nationally online today, and not in a good way.

Reaction to Hinson taking credit for funding for locks and dams coming from President Joe Biden’s Infrastructure plan—which she voted against—was swift, angry and often mocking. Her tweet yesterday about the $829 million from the Infrastructure bill drew national attention.

Many people took particular offense to her framing it as “we” secured funding, considering Hinson wasn’t part of the bipartisan group of lawmakers who voted in favor of the bill.

BREAKING: We secured $829 million in federal funding to upgrade locks & dams along the Upper Mississippi River. This is game-changing for Iowa’s agriculture industry & our Mississippi River communities! https://t.co/4rql7Y8oft

Frustration wasn’t limited solely to the partisan aspect of it, as it also struck a nerve on the more time-honored tradition of politicians doing blatantly hypocritical things.

Around 10:00am Thursday morning, “YOU VOTED AGAINST IT” was a top trend on Twitter nationally, in reference to everyone dunking on Hinson. Her original tweet had racked up about 11,000 replies by then, almost all of them negative. 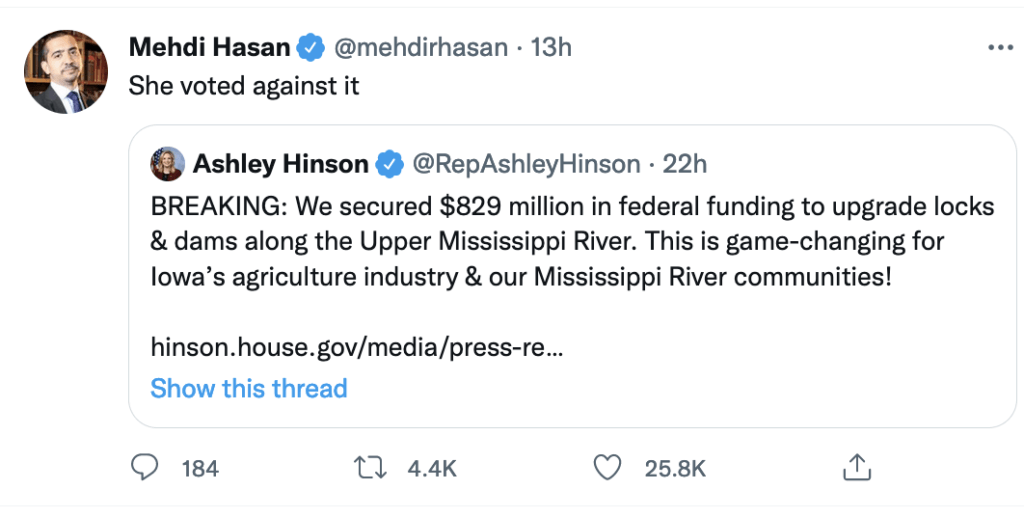 And at least one local reporter remembered how Hinson had specifically said back in November that funding for locks and dams were “sacrificed to advance a partisan, socialist spending spree.” And yet here she was, two months later, celebrating the funding of a major project for locks and dams. 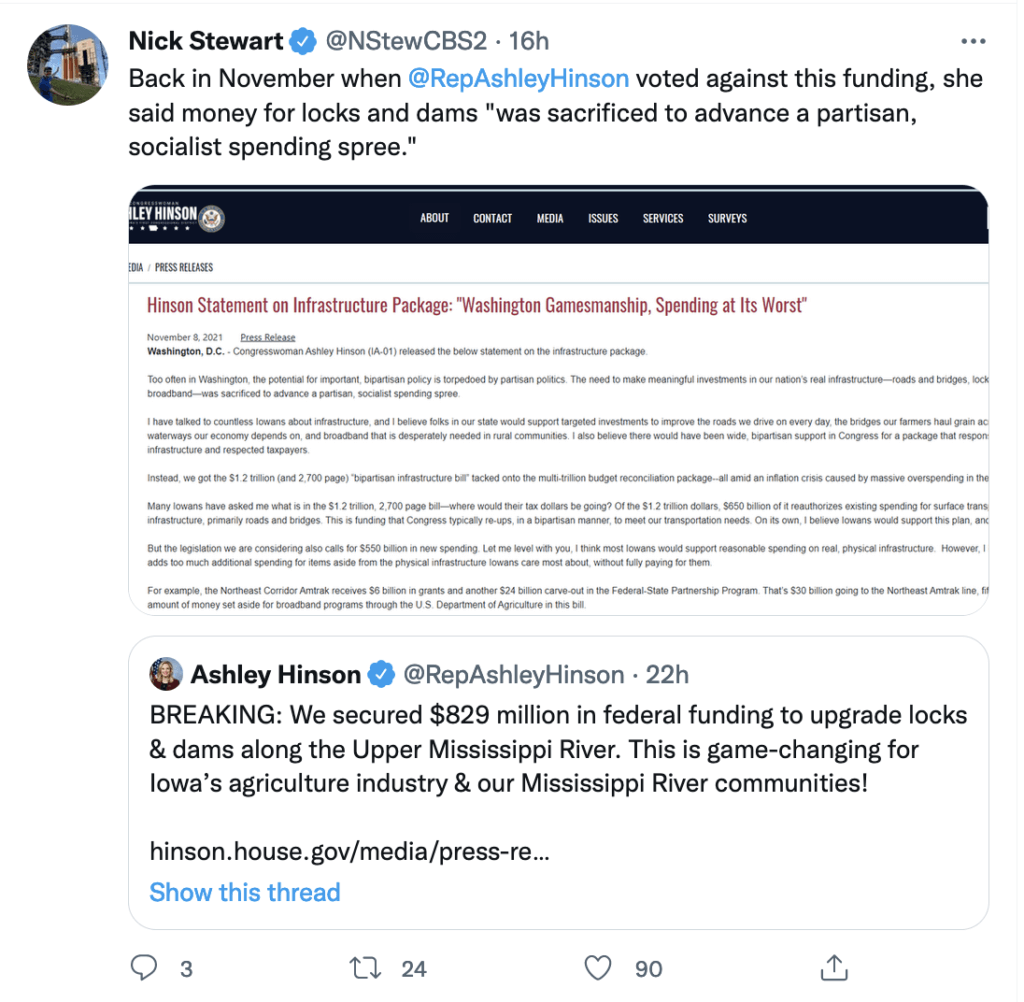 Hinson’s team is arguing that the congresswoman, after the bill was passed without her, worked to direct funding to specific needs in her own district, and that’s a fair point. What is also a fair point is that the funds for those projects may not have been available had Hinson had her way in the first place.

It’s not like the bill wasn’t bipartisan. Even Iowa’s Sen. Chuck Grassley voted in favor of it.

But Hinson wanted to both make a political point back in November and then reap the political gains of the funding that other members of Congress secured when they took a tough vote on the matter. Hinson was more interested in sticking to the national Republican line and taking shots against Biden and Democrats than she was on working across the aisle to get things done.

Several commentators online noted the irony of Hinson’s pinned tweet, which reads in part, “We love Iowa pork but hate Washington pork.” She was making a pun off flipping meat at the State Fair, but others felt it summed up Republicans’ stance on spending well: they’ll criticize federal funding when it helps other states, but they’ll be the first to cheer it when it comes into their district.

However, perhaps Democrats should thank Hinson for one thing: she’s become one of the better messengers for the success of Joe Biden’s agenda. The actual impacts of Biden and Democrats’ Infrastructure plan are so popular and needed that even Republicans like Hinson, who once publicly trashed it, can’t help but now admit the great, local success it’s bringing to Iowans.