School boards handle a variety of issues from approving milk contracts to voting on building projects, but opposition to mask mandates and diversity standards seemed to be the biggest talking points in many Iowa races, and Ankeny and Waukee were no exception.

Those two districts, as well as right-wing challenges in other places across Iowa, were part of a larger, national phenomenon this year, often motivated by online anger over Critical Race Theory (despite the concept not being taught in K-12 schools) and masking policies.

But while national reporting has often focused on the anti-CRT aspect of these candidacies, the way the actual campaigns played out in Iowa did not fit a single playbook–nor did the results. Victories in Ankeny and Johnston were balanced out by losses in places like Southeast Polk, other suburban Des Moines areas, Sioux City, North Scott, Mount Vernon and more.

So why did one group of conservative suburban candidates find success while another did not? Starting Line examined public and private candidate Facebook posts, campaign finance records, media reports, and more to try to find an answer. For this article, we’re focusing on what the conservative candidates did in just the Waukee and Ankeny races.

Ankeny was Iowa’s epicenter for anti-mask mandate sentiment. A few contentious school board meetings garnered national media attention including one where a local Q-Anon supporter threatened board members.

“We know where you live! We’re going to stalk you! We’re coming to your house!” the QAnon activist shouts at the Ankeny school board members as they leave the stage pic.twitter.com/cqtdCHna6R

Burk, Murphy, and Barthole made it clear they were against mask mandates, a popular topic in the private Ankeny parent Facebook pages. All three were personally endorsed by Kimberly Reicks, an Ankeny mother who, alongside Emily Peterson of Ankeny, are known as the Iowa Mama Bears in far-right circles because of their opposition to vaccines and mandates. 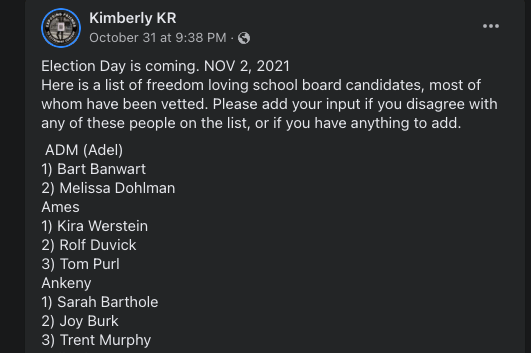 For what it’s worth, Reicks also endorsed the Waukee candidates.

The Iowa Mama Bears led protests outside of Ankeny School Board meetings and stood next to Gov. Kim Reynolds in May when she signed a law banning mask mandates for Iowa schools.

Meet Emily Peterson and Kimberly Reicks standing tall with Iowa Governor Kim Reynolds. Emily & Kimberly stood up for all of our children and fought to bring a stop to the mask mandate for children in their state (Iowa). These two r fearless & fought at the local & state level… pic.twitter.com/VdtP4qmdoU

Barthole publicly denounced any connection to the contentious school board protests. Barthole was, however, credited for fighting to keep school buildings open by Reynolds, who later endorsed her candidacy, a rarity for the governor’s office in a school board race.

While the mask mandate was clearly the topic of interest in Ankeny, Barthole, Burk, and Murphy, who previously served a decade on the Ankeny School Board, also focused on other, more conventional school board issues in their messaging.

The Waukee candidates also made posts about other items they viewed as school board issues, but it was clear mask mandates, Critical Race Theory, and challenging the district’s equity standards took precedent.

The mask issue was given new life in September when a federal judge put a stay on Iowa’s mask mandate ban, which led to some school boards deciding whether or not to take action on the matter, including Ankeny and Waukee.

The Waukee School Board voted 6-1 against mandatory masking for all staff and students and they were tied on whether or not to implement a mask mandate for pre-K-6th grade students and staff. Lori Lyon, who was reelected in Waukee, voted against the mandate for all grade levels but voted for the second proposal that ended in a stalemate.

All seven candidates opposed mask mandates and wanted to keep kids in school full-time, but where they differed was on how the campaigns were run and their public messaging around diversity, CRT, and the LGBTQ community.

For example, the three Ankeny candidates didn’t publicly wade as deep into the CRT waters as much as their Waukee counterparts did.

Before he became a candidate, Murphy posted his longing for three anti-CRT candidates who supported keeping kids in school and weren’t afraid of being called a racist. He made these remarks in a June post inside a private Ankeny parents’ Facebook group, to which Barthole commented “Love this Trent Murphy!” 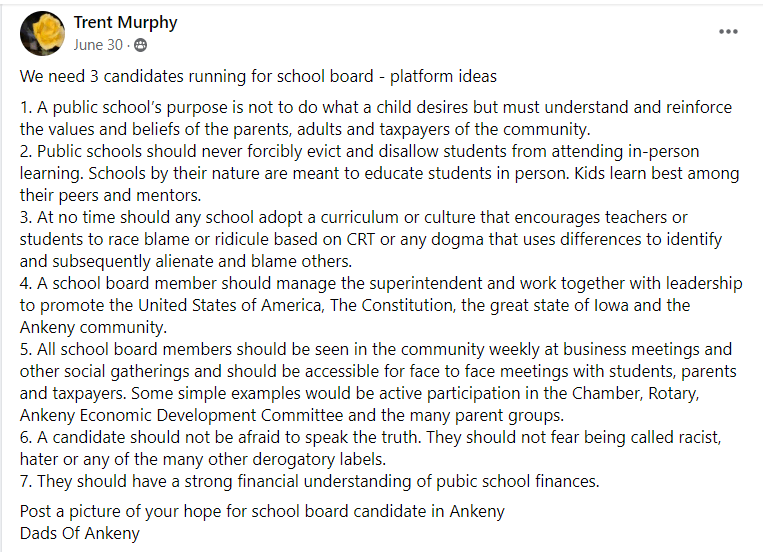 Publicly, however, Murphy told the Des Moines Register in a candidate questionnaire all points of view should be respected but it’s the schools’ job to teach Iowa Core. In that same questionnaire, Barthole and Burk spoke in favor of diversity, although Barthole added the caveat that it be age-appropriate.

Barthole and Burk were also asked their views on CRT in a private Ankeny parenting Facebook group. Barthole noted it was important to follow Iowa law and teach kids how to think and not what to think. Burk said she understands it’s a hot-button issue, but needed to learn more about it before answering a question. Later in public responses, Burk noted CRT is not being taught in schools while reaffirming her support for parental involvement in curriculum and Iowa’s divisive concept law. 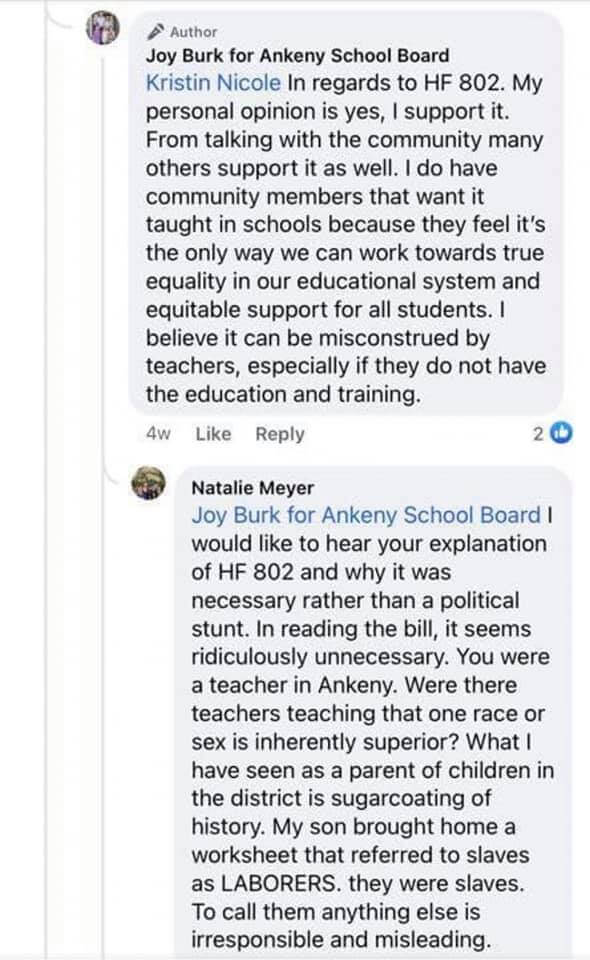 By contrast, Waukee’s four unsuccessful candidates spent a bulk of their collective messaging—under the Warriors and Wolves United for Waukee political action committee chaired by Rubino’s wife, Tami—fighting the district’s equity standards and CRT, a subject not taught in public schools.

The Register presented a similar questionnaire to Waukee’s school board candidates, but the only conservative candidates who responded were Hughes and Thaker.

Hughes never used the words “diversity” or “inclusion” in her answer about where she stands on diversity and inclusion efforts in the classroom and ended her response in a limp paraphrasing of Rev. Dr. Martin Luther King Jr. by saying people should be judged based on the content of their character.

Thaker noted diversity and inclusion “are important from a holistic standpoint,” but that should also include diversity of thought as well.

The Waukee candidates may also have gone overboard in how they campaigned on the issue. Under their Warriors and Wolves banner, the candidates and their supporters distributed a two-page flier that made direct attacks against teachers and district personnel. It did not include citations (their website had some instead), and critics pointed out that many of them were essentially rumors from anonymous sources or significant misrepresentations of what really happened in the schools. 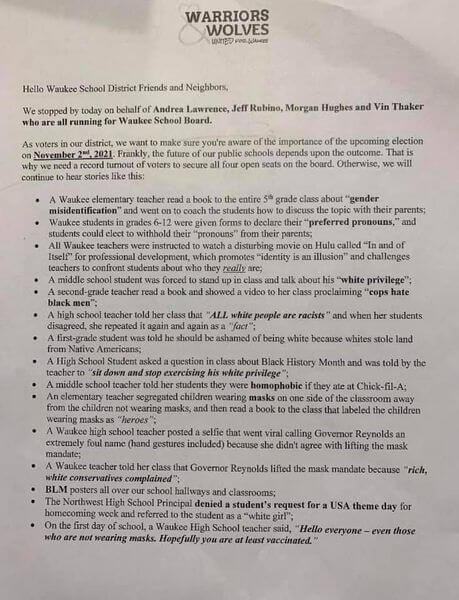 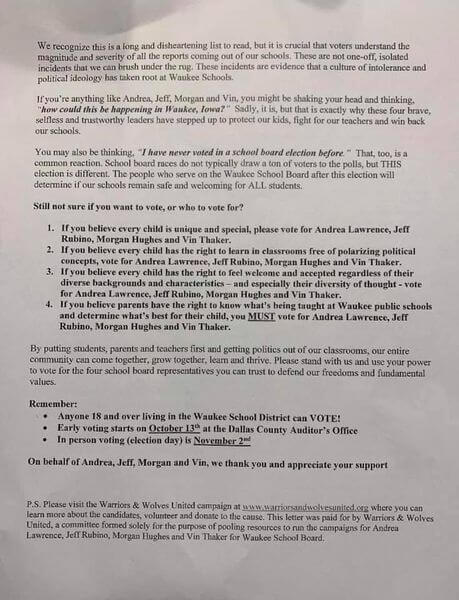 Thaker also seemed to be a liability for the Waukee team.

In the late stages of the campaign, the Warriors and Wolves United Facebook page shared article links that supported opening a criminal investigation related to some LGTBQ books being in the high school library. 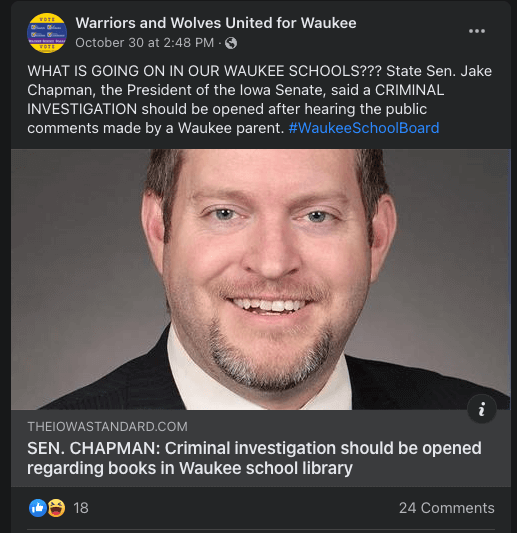 Thaker brought additional national attention to the group when he took it a step further and suggested that if he was elected, he would find the name of every student who checked out those books and then notify their parents. 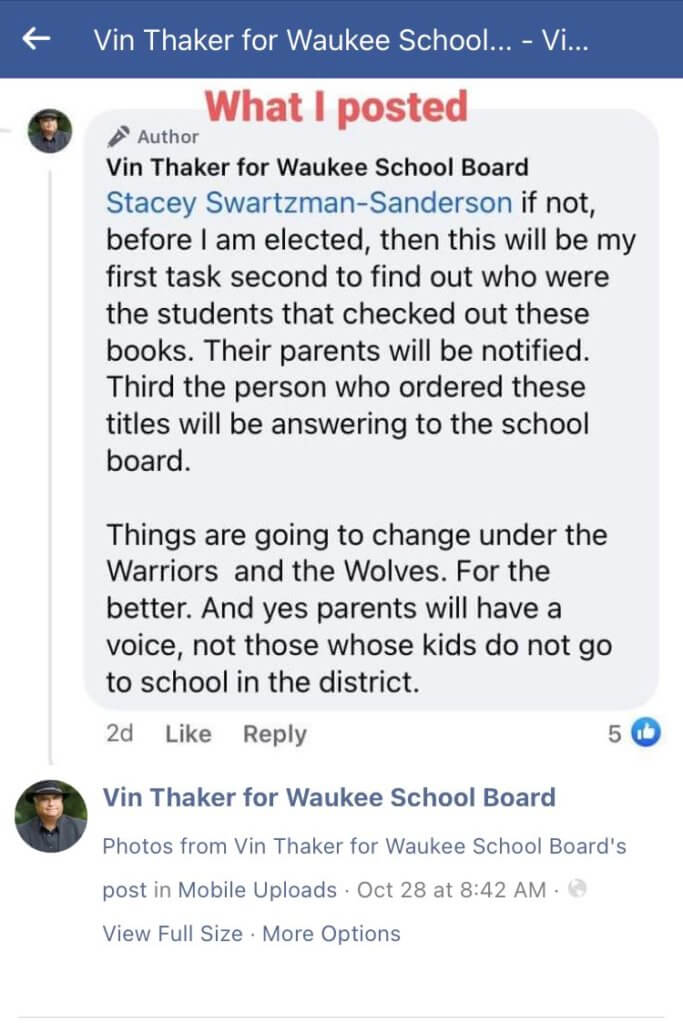 On the flipside, Barthole and Burk told supporters they support the LGTBQ community. On her campaign page, Barthole said she supports LGBTQ and non-binary students and believes in respecting everyone’s differences.

Burk, on her campaign page, noted she did not think she would have been endorsed by Ankeny’s Iowa State Education Association chapter if she didn’t support the LGTBQ community. 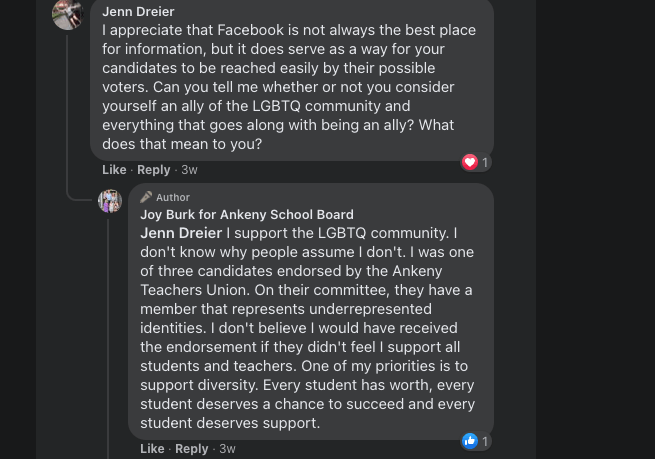 Murphy did not appear to take a stance on LGBTQ issues this cycle, although in 2008 he was the lone voice on the Ankeny School Board who voted in favor of removing a book about two male penguins raising a chick together from elementary school libraries.

While left- and right-leaning school board candidates across Iowa partnered up with like-minded folks during the race—and sometimes their supporters did the pairing—the Ankeny trio positioned themselves as individuals, which was also reflected in their fundraising.

Murphy financed his entire campaign while Burk only collected about $765 in contributions but has a little more than $10,000 in unpaid campaign bills, according to Iowa Ethics and Campaign Disclosure Board.

Barthole received nearly $11,000 in campaign contributions, including a $5,000 donation from her father, $1,280 from herself, and nearly $2,000 from her kick-off fundraising event attended by Gov. Reynolds.

None of the Waukee candidates filed individual campaign reports, but the Warriors and Wolves United report noted each candidate and/or someone related to them donated to the PAC through either a direct or indirect contribution.

The candidates also used the PAC as a one-stop-shop for all four of them, whereas supporters of Barthole, Burk, and Murphy lumped them together organically.

Elections are tricky things to figure out and voters are fickle.

The private musings of Ankeny parents coupled with the public displays of frustration show just how seriously many people took their opposition to mask mandates and desire to keep students in the building. There were also concerns about the fictional teaching of CRT in Ankeny, but that didn’t dominate the narrative as much as it did in Waukee. Barthole, Burk, and Murphy seemed to understand those sentiments, but they also focused their messaging on tangible issues in the district.

While there are a lot of people who felt similarly in Waukee, the presence of the Warriors and Wolves United group coupled with its direct attacks, a weak link, and what came across as an anti-diversity campaign in an increasingly diverse district may have hurt its candidates. The PAC was transparent about its motives, but many of its tactics in the district appeared to generate more blowback for them than outrage at the current school board.