Former Secretary of State John Kerry on Thursday hopped on an Iowa-organized Earth Day Zoom call with state and national climate leaders to encourage a reassertion of climate authority following years of avoidance.

“We’ve had an incredible meeting here in Washington with leaders from all over the world. Prime Minister Modi, President Xi, President Putin, and presidents of France, the German Chancellor and so forth. And many countries that are the most vulnerable in the world have been here today speaking because we wanted them to speak,” said Kerry as he joined the event.

“I think what’s come out of it is that there’s a growing, growing sense of urgency. I don’t think everyone’s responding to that urgency yet, but it’s stepped up. Now we’ve got to work with the others. We’ve got to get the rest of the world to understand just where we are. How bad it is and what it’s going to take to lift us out of this mess.” 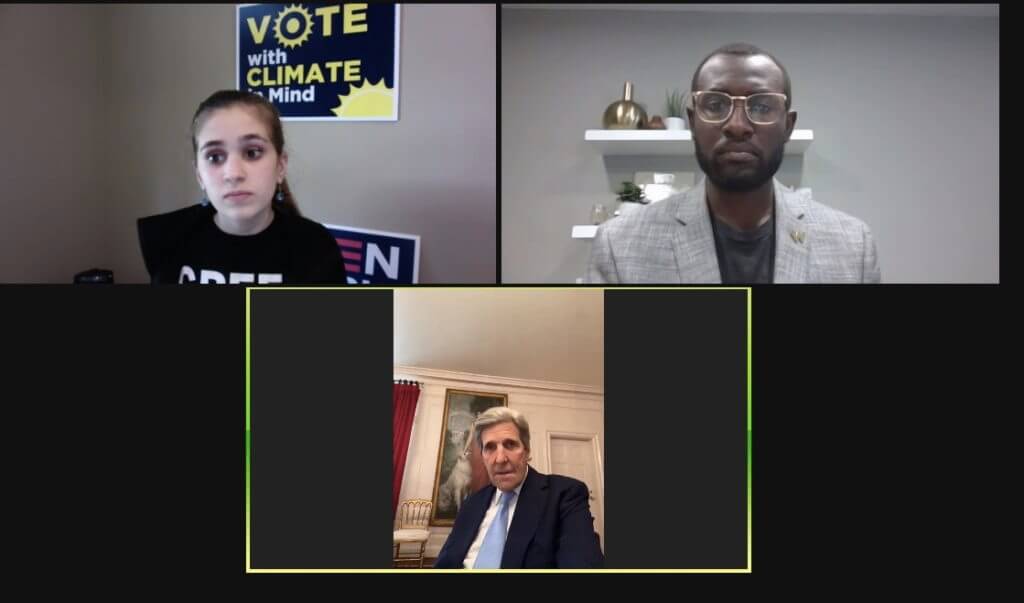 Iowa Interfaith Power and Light, the Johnson Iowa Climate Change Committee and Iowa Beyond Coal organized the virtual event, where all speakers called for renewed climate leadership from Iowa and the rest of the country to step up and take action on the world’s most pressing crisis.

President Joe Biden on the campaign trail in Iowa often stressed his desire for the United States to stand at the forefront of climate as a global emergency. He pledged at the summit on Thursday to cut U.S. greenhouse gas pollution in half by 2030.

Rep. Smith agreed with Kerry’s emphasis on climate leadership, noting the vacuum of strong overhead guidance on the issue in Iowa.

“Leadership reflects attitude. That’s something that I talk about all the time,” Smith said. “Lack of leadership in the state of Iowa surrounding climate crisis is pretty laissez-faire. It hasn’t reached the level that we know it needs to.”

Little legislation on climate has passed the GOP-controlled Iowa Legislature in recent years. Kerry noted how Iowa’s mostly Republican federal delegation has failed to adequately address climate change. He urged the state to press their representatives to take action.

“You’ve still got a senator who I think is not embracing the science of climate right now. So the political process has got to hold the whole system accountable, but the important thing is that everything you can do day-to-day to get people to realize not that it’s a panic, because we can do it, and it doesn’t mean sacrificing your lifestyle.”

After Kerry jumped off the Zoom call, conversation between the climate leaders touched on how to talk about climate with communities, the small actions that Iowans can take to actively fight against the climate crisis and the state’s experiences with climate-induced natural disasters, like last summer’s derecho and floods.

“We need folks to be demonstrating courage on a regular basis, and that’s what this takes,” Smith said. “As a sitting legislator, I can tell you right now in Iowa, I’m oftentimes disappointed because we don’t take advantage of some of the forward-thinking leaders that we have in our state. We have Senators like Rob Hogg and Eric Giddens…who get this. Who live this. And who do all they can, even in the face of adversity, to push the needle forward, and unfortunately what we’ve seen is legislation that comes across that empowers the fossil fuel industry.”

“Being leaders like Lilly,” Berardelli added. At just 13, Hill has been penned a climate champion and educator.

“Iowa is really uniquely positioned to lead the nation in addressing climate change. We’re positioned in a way that our impact on the global system is so significant that if we stand up as a state and decide that we want to do more and we set lofty and ambitious goals, we would see other states follow but we’d also see the globe follow in a more meaningful way,” Smith said.

Kerry, who was the 2004 Democratic Presidential nominee and Iowa caucus winner, nodded to the virtual event’s first-in-the-nation audience.

“I’m happy to touch base with Iowa at a time when its pretty clear, I ain’t running for nothing,” he said, laughing. “Thank you all for caring about this… I strongly urge you just to keep on keeping on. We’ve got to this point where we’ve got a president who is deeply committed to doing something about the climate crisis and we’ve just got to make the most of this moment.”