Civil rights activist Willie Mae Wright wasn’t going to let the pandemic prevent her from casting her vote at the polls. The 88-year-old was going to don her protective gear and make her way to Waterloo’s Ward 4 Precinct 1 polling location, and no one was going to stop her.

“I’m going to the natural polls and see my ballot go through that machine and know I’m counted,” said Wright. “Knowing the hard times when you [Black people] could not do it, I want to make sure I exercise that right to go to the polls and vote.”

Wright, who was born in Goodman, Mississippi, experienced those hard times firsthand and remembers what Black people had to go through to vote.

“Before you could even register to vote, you had to recite the Constitution of the United States, plus you had to be a property owner and pay a poll tax,” she explained. “That’s why [Black] people weren’t registered in Mississippi.”

Wright remembers one woman who stood and recited the entire Constitution but when she finished, they still wouldn’t let her vote. 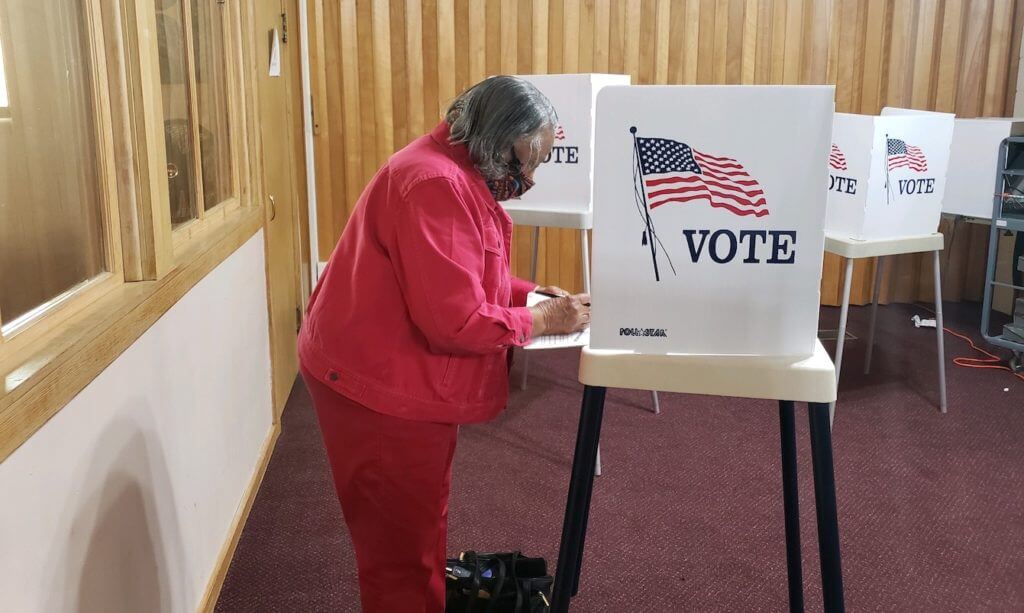 When Wright moved to Waterloo when she was 23, she registered and has been voting since 1957.

In Waterloo, Wright is considered a civil rights icon. As The Courier reported when nominating Wright for their 8 Over 80 recognition, Wright contributions include being a Waterloo City Council member for 10 years, president of Waterloo Women’s Civic Club, secretary and executive board member of the Black Hawk County NAACP and on the board of the Jesse Cosby Neighborhood Center. She was also a board member of Up Downtowners, Adults Inc., Black Hawk-Bremer League of Women Voters, Operation Threshold, and Silos and Smokestacks. She taught Sunday school and was an education director at Payne AME Church.

She’s even getting a community center at the new grocery store complex named the Willie Mae Wright Community Center.

Wright attributes her start in civil rights to her son.

“My son wanted to be a Boy Scout and they told me at Longfellow School that they didn’t have a Negro person to work with the [Black] Boy Scouts and I asked, ‘What does it take?’ I’ll be one.”

So Wright became a den mother for the Sunrise Boy Scouts and attended their camps. Wright added that at that time, leaders were supposed to be men, so she was called an Auxiliary Member. She continued involvement in her children’s schools, from PTA in elementary school to serving on advisory boards at their high schools, always serving in leadership roles to prove that Black people could do the same things as whites.

One of Wright’s most challenging accomplishments was running for Waterloo City Council in 1982, as there had only been one other Black person on the council before her, and she had been asked to run on the ticket with the mayor and all white males. That had never been done before.

“Being able to provide our community with water,” Wright said was her greatest accomplishment on the council. “When I first got there [in 1983], there was no water in the little section of 4th Ward — they had no running water. The part that didn’t have any water was called the Maywood Addition.”

Wright also takes pride in getting an extension built on to the Jesse Cosby Neighborhood Center for senior citizens, which was originally for Black children. She worked with Rep. Al Garrison, who was also Black, to get money from then-Governor Robert Ray who had allocated funds for seniors in northeast Iowa.

“They had a senior citizen center here but it was all white and the [Black] members were saying every time they would go, these white people would mention about them having working for them.” So the Black senior citizens wanted a center of their own and Wright got it for them.

Wright remembers being a member of a coalition that marched in Logan Plaza for better jobs, more Black teachers, better educational materials, and more. According to Wright, the protest began when students (her daughter was one) staged a walk out at East High School, then activist Jimmie Porter and Payne AME Church formed a coalition, which staged a sit-in in the superintendent’s office.

“The sit-in was because of the unequal number of teachers—Black teachers, there were only three—and because the school used the ‘Little Black Sambo’ book.”

The march that Wright participated in followed the sit-in.

Wright hasn’t let a little thing like age slow her down, and she’s encouraging everyone she knows to vote today — with proper precautions.

“Things are headed to back to the way they were before. People fighting and looting and the frustration and anger. That’s the way it was back in the 60s. They [Black people] were fighting for their rights and the same thing’s repeated now. Even with the policemen—the slave owners, the Ku Klux Klan, were killing people then. Now, the policemen are doing it.”

Wright wants to prevent this slide backwards. That’s why she is watching her ballot enter the voting machine to be assured it is being counted.